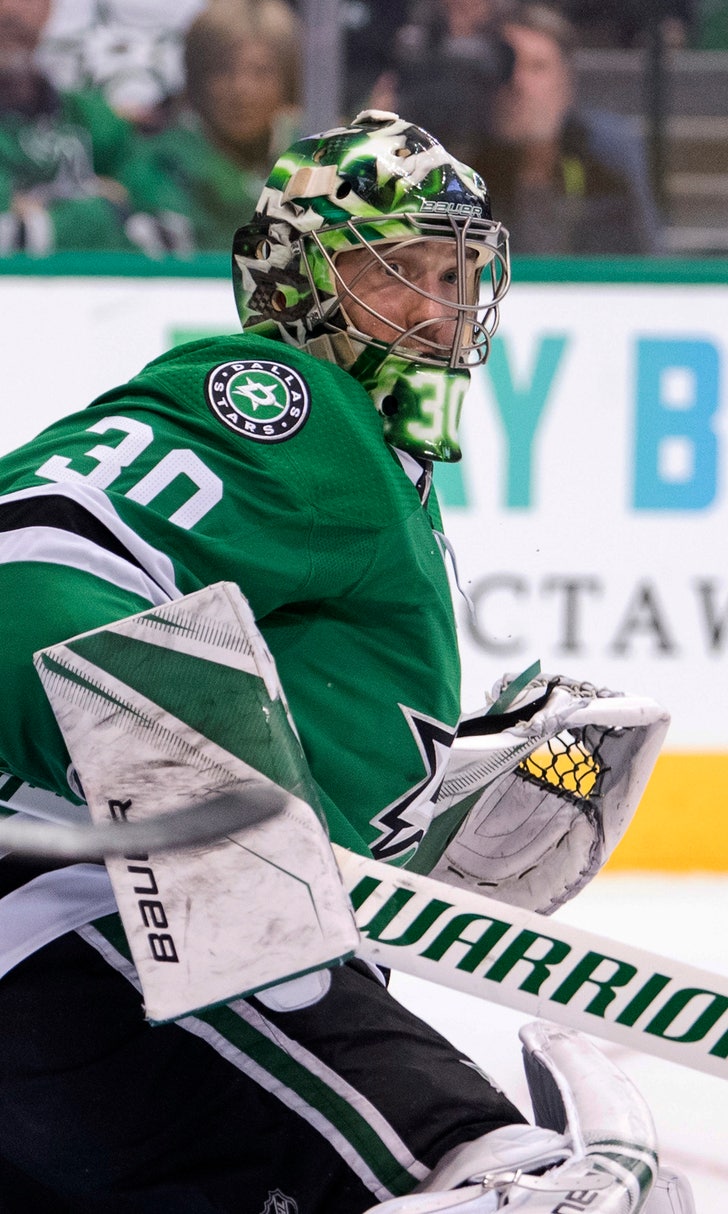 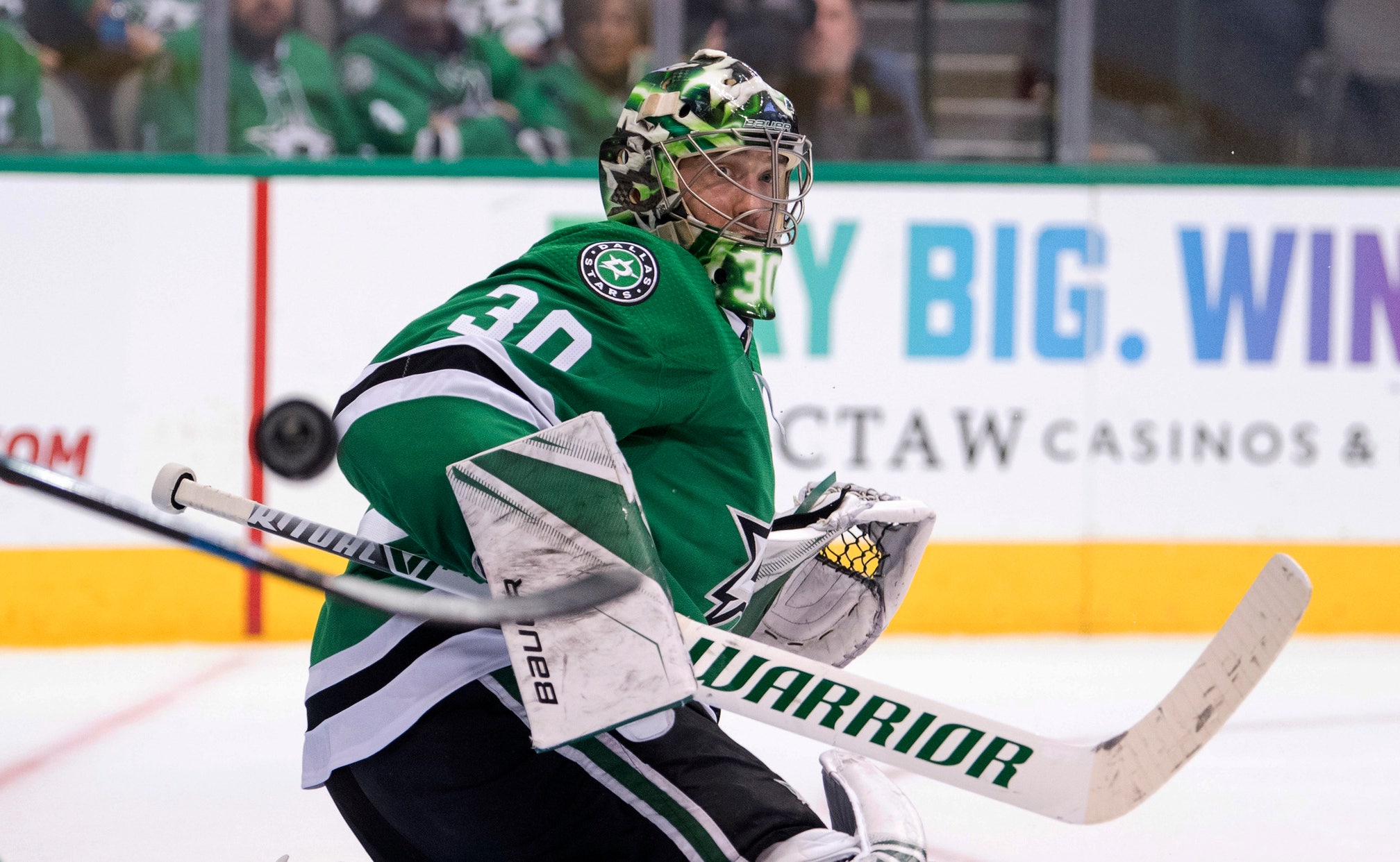 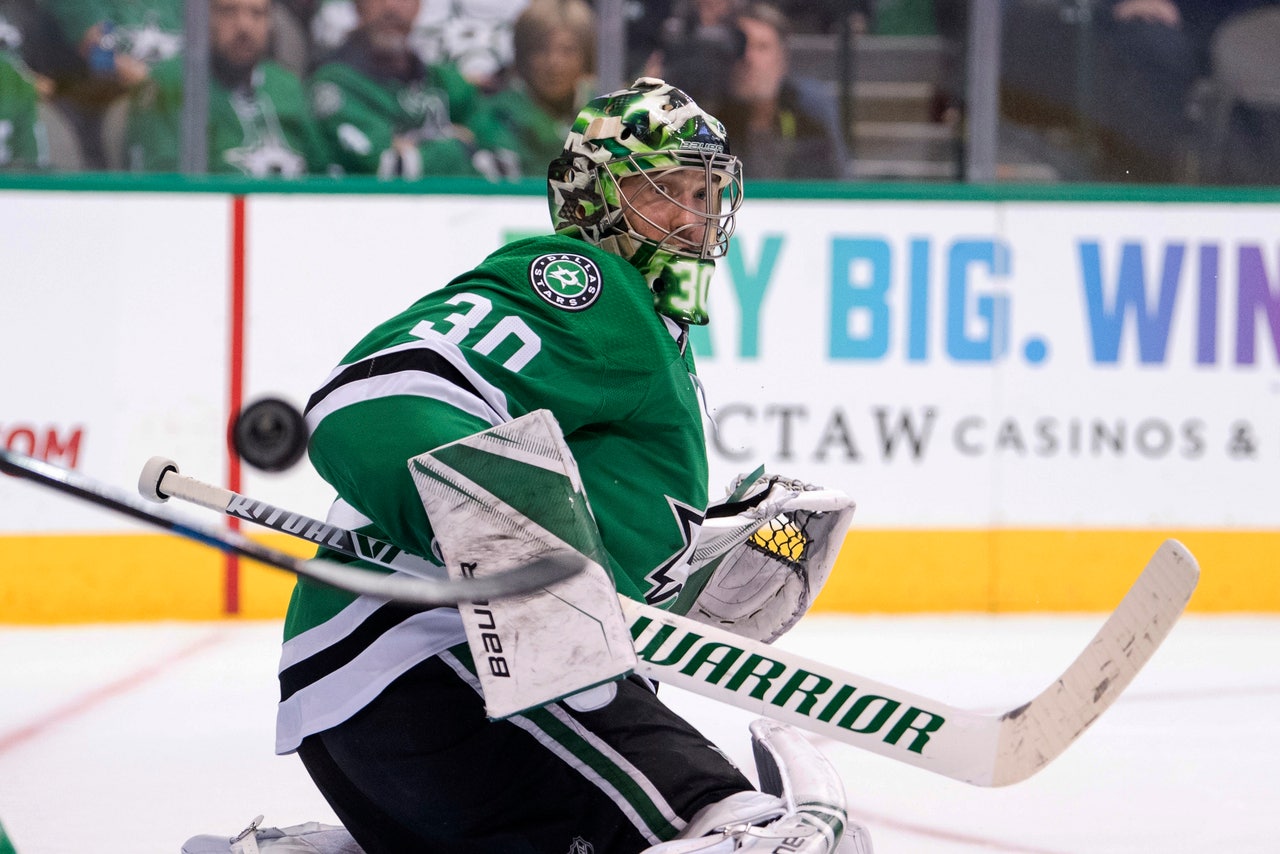 DALLAS (AP) — Ben Bishop got help from backup Anton Khudobin, and together they made franchise history.

Bishop and Khudobin teamed up for the first combined shutout for the Dallas Stars in a 2-0 win over the Calgary Flames on Tuesday night.

Jamie Benn and Radek Faksa scored for the Stars as they dominated the first two periods.

Bishop was injured with 6:23 remaining in the second period when Garnet Hathaway skated into him behind the net. Khudobin closed out the period with three saves, and Bishop returned for the third, when he made 12 of his 21 stops. Hathaway was penalized for goaltender interference.

The Stars' starter underwent the NHL's concussion protocol late in the second period and into the second intermission.

"He just kind of hit me in the chin there," Bishop said. "He got me decently good.

"I passed (the protocol), so I went out for the third. It's a little easier with the intermission there. I kind of regrouped and got ready for the third."

Montgomery said the decision to return was Bishop's.

"He said, 'Yeah. I want to go back in.' I'm going to let him make that call, especially when he was so calm and in control."

The combined shutout was the first in the Minnesota North Stars/Dallas franchise's 51 seasons and the 67th in NHL history, according to the league.

The Dallas penalty killers, after allowing three power-play goals at Colorado on Saturday, killed Polak's penalty and three others.

"There was an intent there by Hathaway to run into (Seguin), who had no idea he was going to get hit," Montgomery said. "Good job by Roman Polak."

Dallas returned from an 0-4 trip to win their fifth straight home game. The Pacific Division-leading Flames had won three straight and eight of nine.

"We had two days off where everyone got to say hello to their kids, their wives, and enjoy the great weather here in Dallas, Montgomery said. "You come with a new refreshed mentality, and I think it showed right from the start."

The Stars' 12th shot gave them a 1-0 lead at 12:15 of the first period. Tyler Seguin passed from just behind the goal line to the front of the net, where Benn easily deflected it past Rittich.

"We were poor early," Calgary coach Bill Peters said. "Didn't win the faceoffs. Therefore, never had the puck and therefore you see the discrepancy in the shots."

Dallas took a 2-0 lead at 17:17 of the second when the puck went from Martin Hanzal to Faksa in the slot. He put the puck on his backhand and slid it into the right corner.

For Tuesday's game, Faksa moved from centering a line to playing left wing on Hanzal's line.

"They just had two guys going after Marty, so I tried to go to the net and it bounced to me. I saw the goalie go poke-check and I get kind of lucky I made it."

"He was good again," Peters said. "He gave us a chance, kept us in the game early. He did his job tonight."

NOTES: In 30 career games against the Flames, Benn has 32 points (17 goals, 15 assists). ... After allowing three power-play goals in a loss at Colorado on Saturday, the Stars' penalty killers were 4 for 4. ... Dallas F Jason Spezza missed his first game this season because of strep throat. ... Calgary LW James Neal (lower-body injury) also sat out for the first time, missing a chance to play against his former team. C Sam Bennett (upper body) was out for the second game in a row, leaving the Flames with only 11 forwards. . D Oliver Kylington moved up to a forward position as the game progressed.

Stars: Complete a two-game homestand vs. Chicago on Thursday.