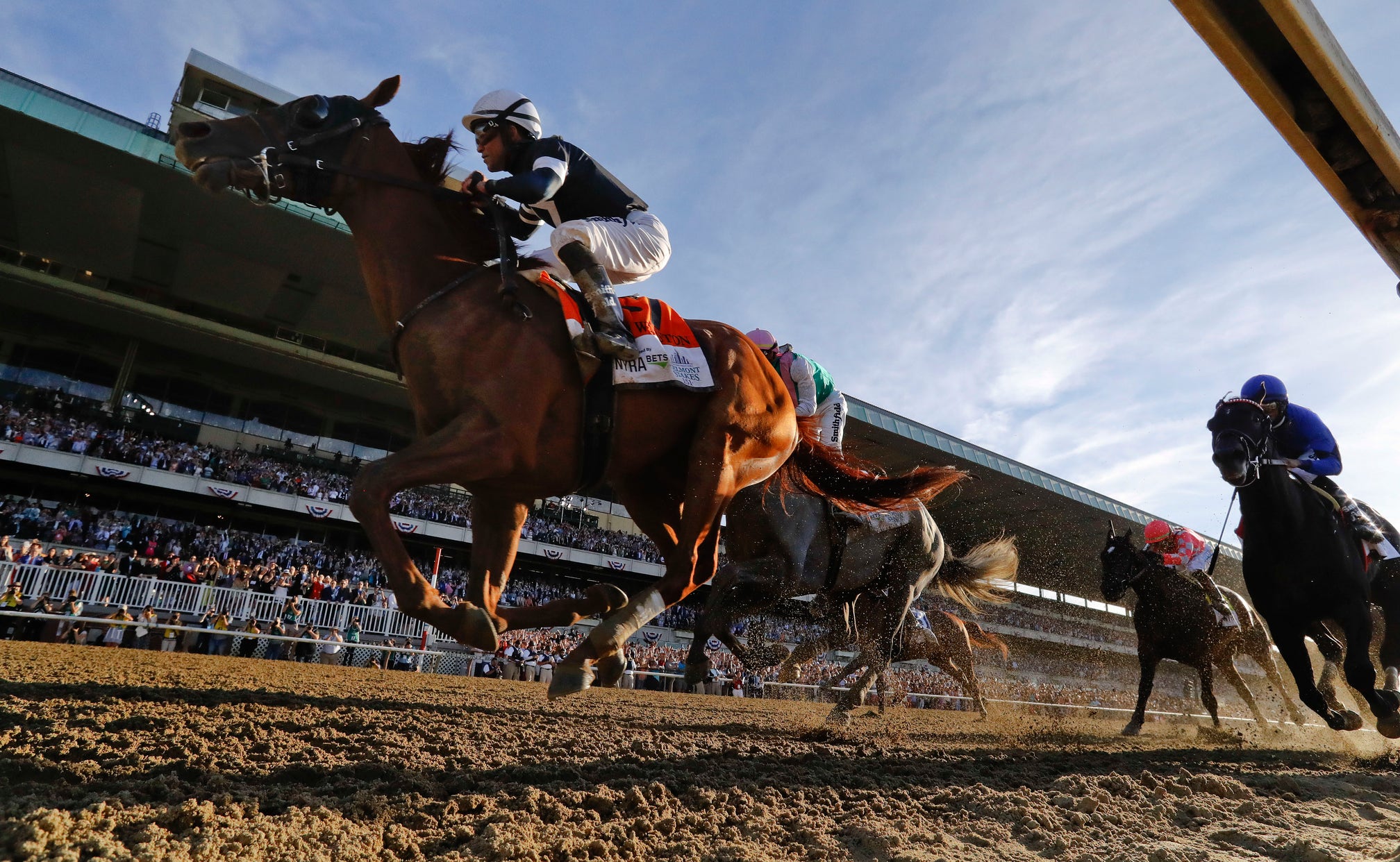 previous story
It's the greatest: Ali's training camp opens to public
next story
Keuchel to join Braves soon, will start Saturday in Triple-A

After a disqualification in the Kentucky Derby and a runaway horse in the Preakness, of course the Belmont Stakes goes to a 10-1 long shot.

The win gave trainer Mark Casse the final two jewels in the showcase for 3-year-old thoroughbreds. He won the Preakness with War of Will, who was expected to battle Tacitus in the 1 1/2 mile Belmont.

Instead, Casse's other's colt took the lead after a ground-saving ride by Joel Rosario.

It wasn't really a shock to Casse.

"I said all week he was doing really well," Casse said. "He had a race over the track. What can I say? It's just exciting."

Sir Winston, who was making his Triple Crown debut, finished second in the Peter Pan Stakes, the traditional prep for the Belmont.

The Triple Crown grind caught up to Preakness winner War of Will, who ran in all three races. He finished ninth in the 10-horse field.

"I could see where War of Will was struggling a little bit," Casse said. "He looked like maybe he was a little flat today."

The Belmont capped an entertaining Triple Crown highlighted by the disqualification of Maximum Security in the Kentucky Derby. It sparked interest in thoroughbred racing despite no possibility of the third Triple Crown winner in five years, coming on the heels of Justify last year and American Pharoah in 2015.

It was all positive. There were no tragedies on the track. No horses died.

The Belmont was a jockey's race and Rosario was the right rider on a horse full of run.

Breaking from the No. 7 post, Rosario guided the chestnut colt to the rail for an energy-saving trip. Sir Winston was eighth for the first half-mile and then started to rally on the final turn.

Up front, 21-1 long shot Joevia continued to set the pace with Tax closely tracking. In the stretch, Rosario angled Sir Winston — named for Winston Churchill — off the rail and slightly bothered stablemate War of Will.

This time, there was no inquiry or objection. Sir Winston surged to the lead with an eighth of a mile to go and held off a late run from Tacitus, who had an extremely wide trip under jockey Jose Ortiz.

The second-place finish denied trainer Bill Mott two-thirds of the Triple Crown. His Country House was awarded first place in the Kentucky Derby.

After Tax, Master Fencer was fifth followed by Spinoff, Everfast, Intrepid Heart, War of Will and Bourbon War. The winning time was 2:28.30 on the fast track under sunny skies.

The win was the third in 10 starts for the slow-developing Sir Winston. Casse always believed in the horse despite early struggles.

"We're very proud of him," the 58-year-old trainer said. "He's kind of what our operation represents. We develop horses. The first two times he ran, he got beat 10 or 20 lengths. I can remember having a conversation with Mr. Farmer up at Saratoga and I said 'Don't give up on him.'"

The feeling paid off — big time.

This unpredictable Triple Crown season started with a wild result in the Kentucky Derby. Maximum Security crossed the finish line first and become the first apparent winner to be disqualified, taken down for interfering with War of Will in the stretch. Country House was elevated to first, giving Mott his first Derby win and becoming the second longest shot (65-1) to win the Derby.

War of Will came back two weeks later to win the Preakness, but his impressive performance was overshadowed when a rival threw his jockey and ran around the track as the race continued.

There were three major races on the Belmont undercard.

Mitole extended his winning streak to seven with a gutsy victory in the $1.2 million Metropolitan Handicap. Pressing the pacesetting Coal Front every step, Mitole put away that rival in midstretch and held off the late challenge by 8/5 favorite McKinzie to prevail by three quarters of a length. Thunder Snow, the richest active thoroughbred with over $16 million in earnings, was third.