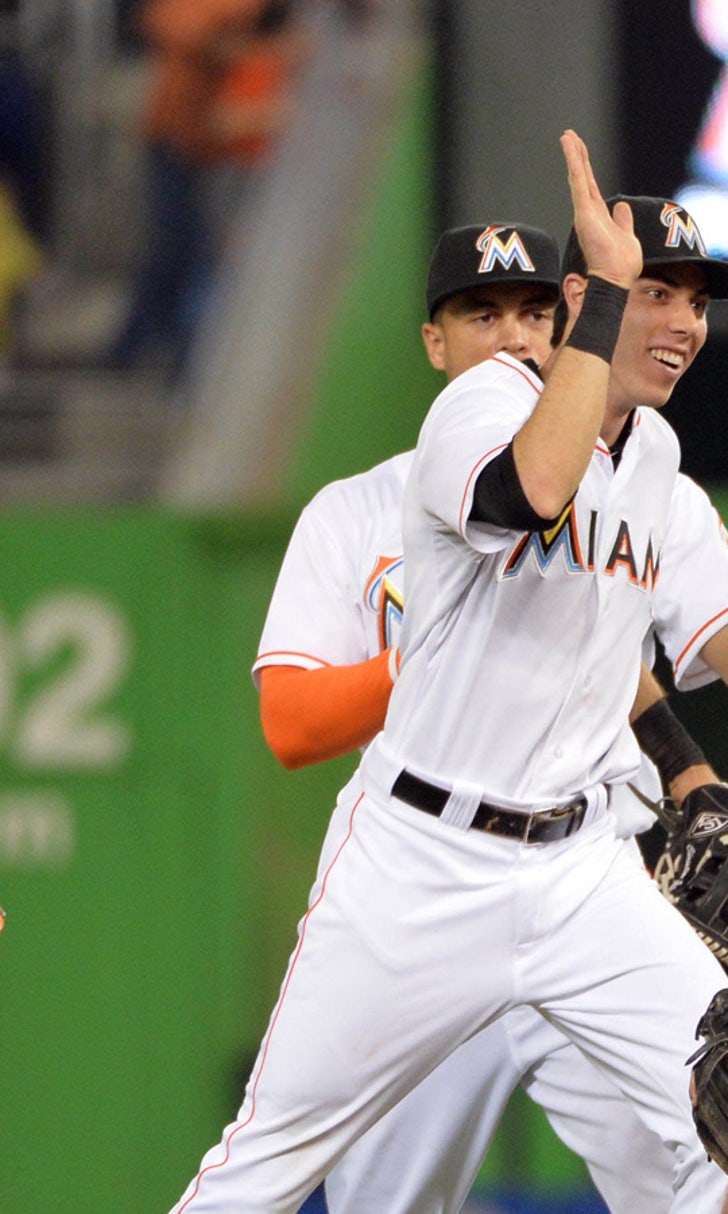 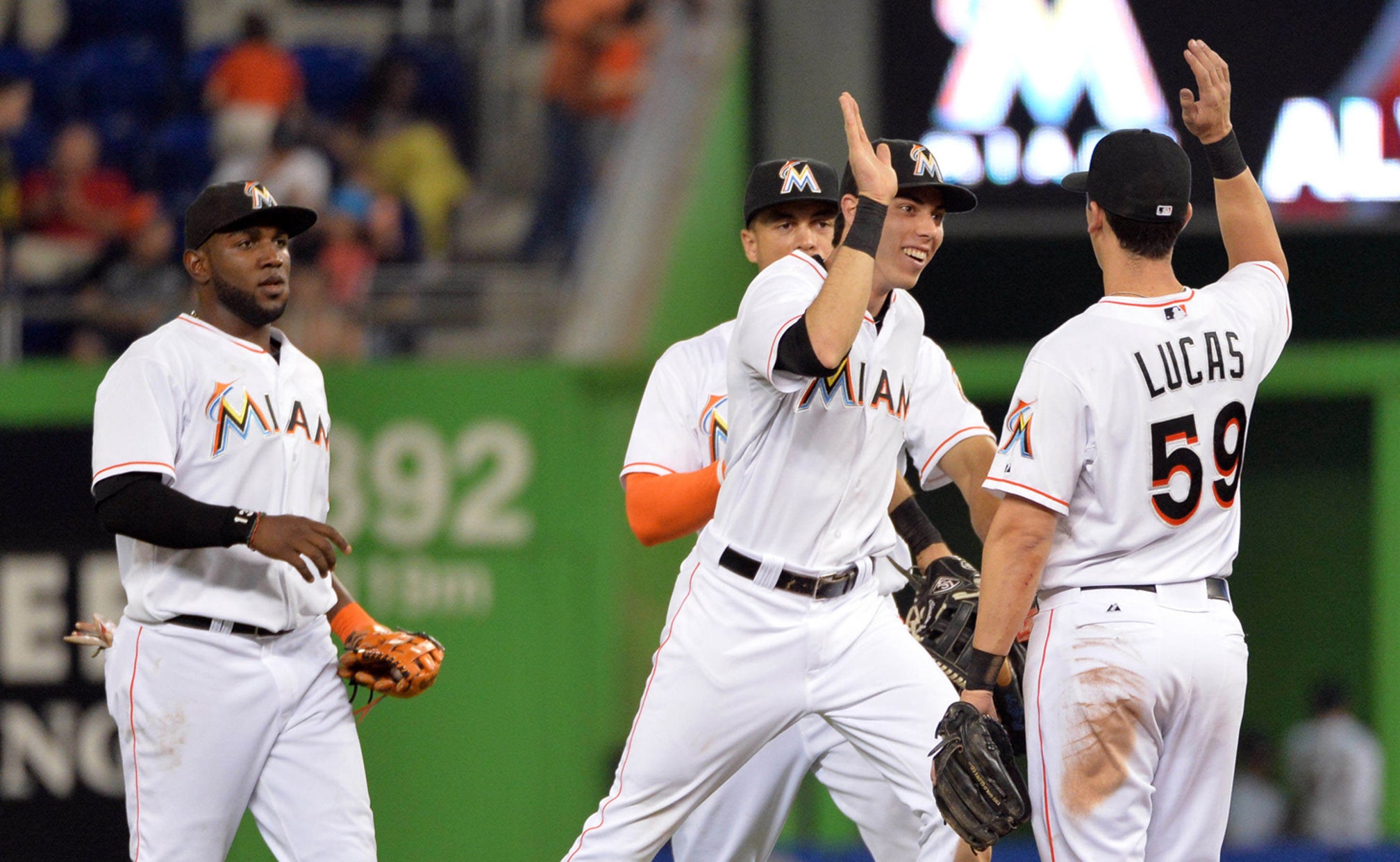 MIAMI (AP) -- Marlins pitcher Henderson Alvarez heard a teammate yell and realized he had been caught by surprise. Desperate for a run, the Tampa Bay Rays were attempting a delayed steal.

So Alvarez wheeled toward second base and threw yet another strike.

The right-hander had good command all night long, needing only 88 pitches to toss an eight-hitter for his third shutout this year. He beat Tampa Bay 1-0 on Tuesday, sending the reeling Rays home after a winless eight-game trip.

''Henderson took that game over,'' Miami manager Mike Redmond said. ''That was fun to watch.''

The only run scored when Christian Yelich walked on a 3-2 slider with two out and the bases loaded in the fifth inning.

Alvarez (3-3) struck out five and walked none in his third consecutive scoreless outing, a stretch covering 19 innings. He retired his last five batters to close out the win in 2 hours, 10 minutes.

''My sinker was working, and thankfully the batters were swinging early,'' Alvarez said through a translator. ''That determines the brevity of the game. I was attacking the strike zone, and they were attacking as well.''

Alvarez's three shutouts lead the majors. He had been 0-5 in five previous career starts against the Rays, but this time he faced a team in a miserable slump.

Kevin Kiermaier had the Rays' only extra-base hit when he tripled with two out in the third. They went 0 for 3 with runners in scoring position and are hitless in their past 22 at-bats in those situations. They've scored six runs in their past six games.

''We're just not able to find that hole,'' Evan Longoria said. ''We just have to keep going, keep fighting, stay positive through the tough times.''

The Rays' eight-game losing streak is their longest since 2009. They've lost 10 consecutive road games while being outscored 52-19.

Tampa Bay hit into three double plays -- one on a sacrifice attempt -- and had two runners caught stealing, including Yunel Escobar on the delayed steal attempt in the fifth. He singled with one out and took off for second when Alvarez had the ball on the mound before the next batter stepped to the plate, prompting catcher Jeff Mathis to holler at his pitcher.

''Escobar caught me by surprise,'' Alvarez said. ''What alerted me was Mathis' scream. An easy out. A gift.''

Chris Archer (3-3) allowed only five hits in seven innings, but Rays starters remained winless in the past 16 games, mostly because of poor run support.

Alvarez's past four victories have been shutouts, including a no-hitter on the final day of the 2013 season. He left his previous start last Wednesday after five innings because of a sore elbow, but he had only the Rays feeling any pain Tuesday.

Alvarez said his arm felt fine, and he allayed any concerns with excellent velocity from start to finish. His final pitch was a 95 mph fastball.

''We could tell early on that he had great stuff and was feeling good,'' Redmond said.

Alvarez helped himself with six assists. The biggest came after a leadoff single in the eighth, when catcher Jose Molina bunted into a 1-6-3 double play.

The Marlins needed three singles -- one by Alvarez -- and a walk to score the game's only run. After they loaded the bases, Yelich fell behind 0-2 but got a walk when Archer missed with a 3-2 breaking ball.

''A great at-bat by Yeli,'' Redmond said. ''I don't know how he laid off a couple of those sliders. For a young kid like that, that's an amazing at-bat.''

Archer hopped off the mound in dismay at the call, but a TV replay showed the pitch was wide.

''Instead of executing a pitch and letting him put it in play, I put it in the umpire's hands, and it turns out he made a great call,'' Archer said. "I should have thrown it over the plate.''

NOTES: Miami slugger Giancarlo Stanton broke hit bat when he lined out in the fourth inning, and the barrel sailed into the Marlins' on-deck circle and hit Casey McGehee in the stomach. He wasn't hurt. ... RHP Kevin Gregg passed his physical and signed a minor league deal with the Marlins. ... Rays OF Desmond Jennings was given the night off. ... Molina turned 39 Tuesday. ... RHP Tom Koehler (4-5, 3.18 ERA) is scheduled to start Wednesday for Miami against LHP David Price (4-4, 4.27 ERA).