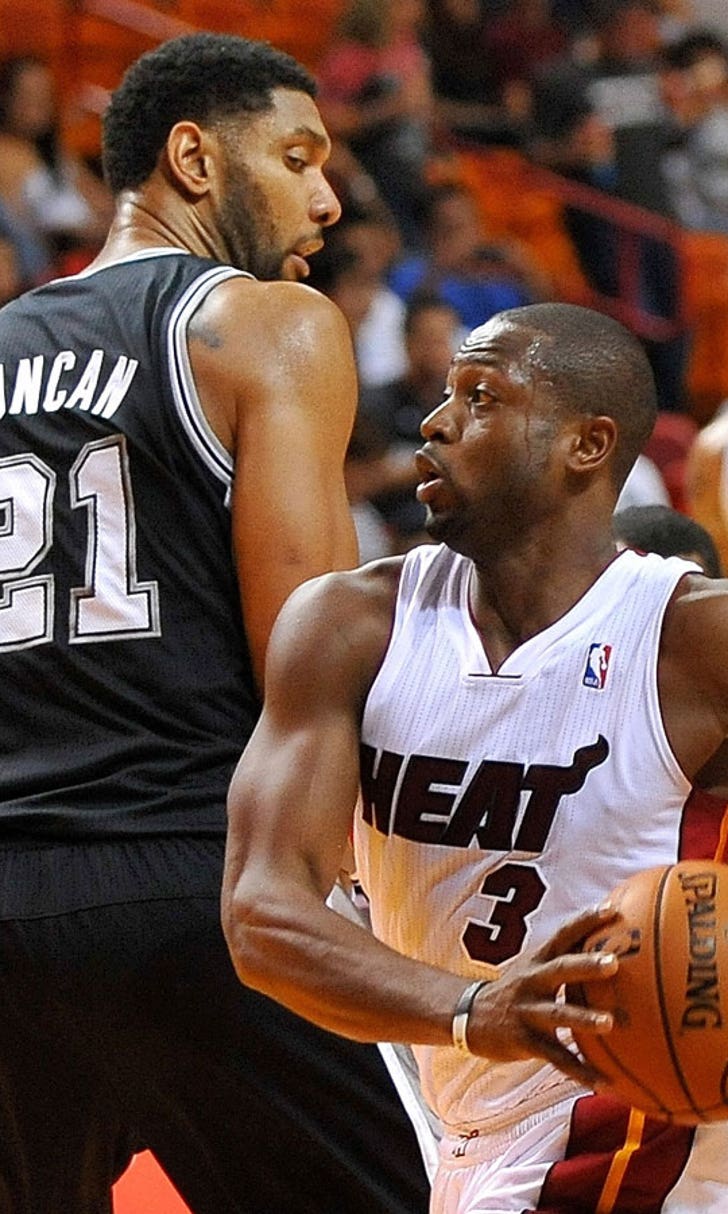 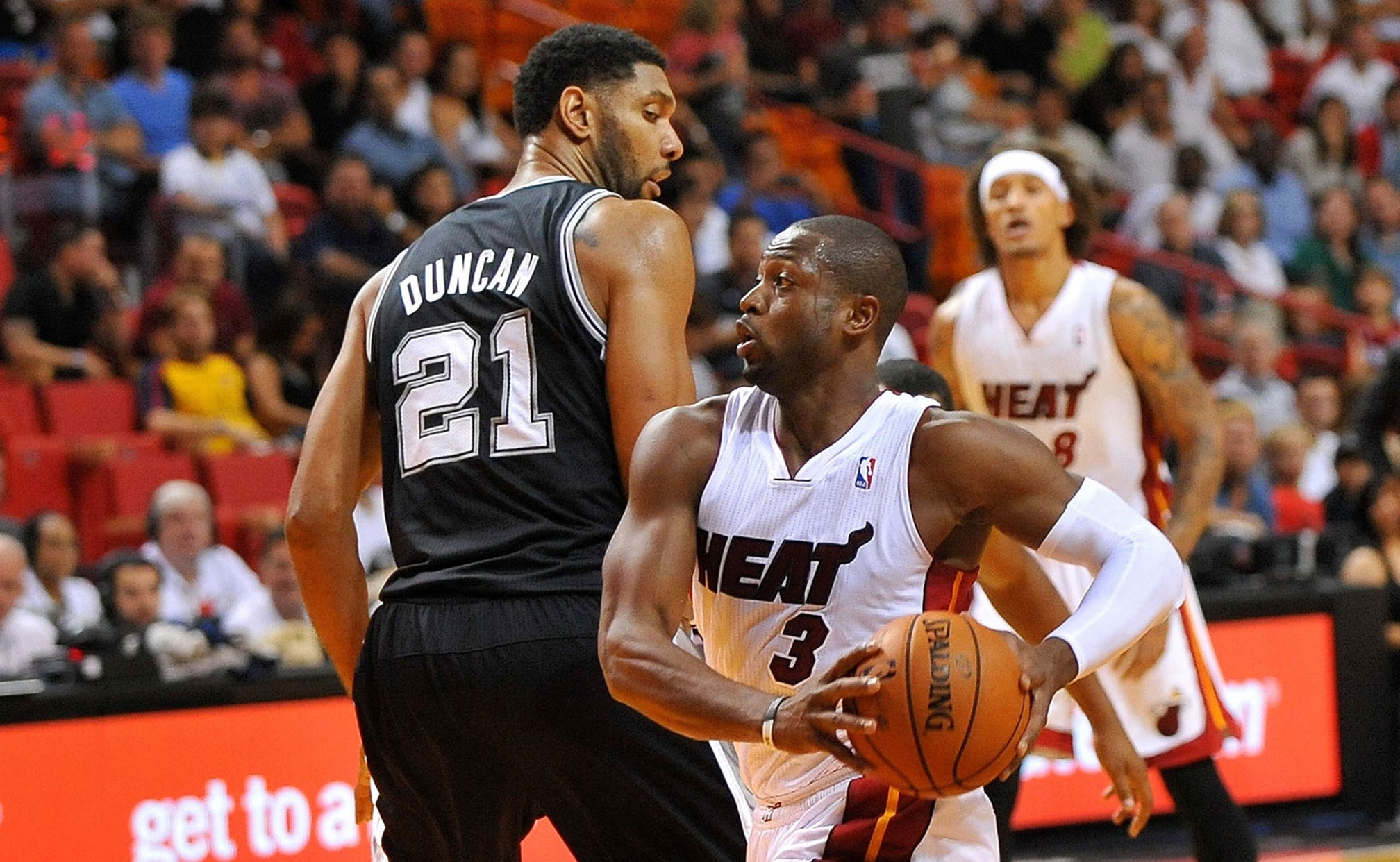 SAN ANTONIO (AP) -- LeBron James and Dwyane Wade can point to statistics showing just how close the 2013 NBA Finals were.

He can't forget the way his San Antonio Spurs lost, especially since every replay brings another painful reminder. The Spurs were on the verge of celebrating a fifth title in Game 6, and just two nights later were congratulating the Miami Heat on their second straight crown.

The Spurs wanted a rematch, and so did basketball fans. It begins Thursday in San Antonio.

"I think it's great that these two franchises have this opportunity in back-to-back years to compete for a championship," Wade said Wednesday. "Last year was an unbelievable series and ... it went down to the very end. We won the series by a total of five points, you know? That's how close it was. But it was a very even series. I think this year it could be another great series."

From Tony Parker's circus shot that stole Game 1 for the Spurs, to Ray Allen's 3-pointer that saved Game 6 for the Heat, to James' jumper that put away Game 7, almost every contest provided a new highlight. It deserved an encore, just like when the Boston Celtics and Los Angeles Lakers seemed to pick up right where they left off in the 1980s.

The NBA hasn't had a finals rematch since 1998, when Michael Jordan's Chicago Bulls beat Utah for the second straight season. San Antonio is considered a slight favorite this time, perhaps a little deeper, healthier and better than it was last year, and owning the home-court advantage this time.

The Spurs don't need to change much to change the result. They outscored the Heat 684-679 over seven games, and there were 47 ties and 42 lead changes, according to STATS.

"If you look at the numbers, the lead changes, the ties and the points in that series, it's almost even," James said. "So we did our part, they did their part.

"Both teams put themselves in a position to win an NBA championship, and we just happened to make one or two more plays to win it."

Duncan, a three-time NBA Finals MVP who had been 4 for 4 at this stage, wasn't on the floor when the Spurs couldn't come up with a rebound just before Allen's shot. He then missed a shot and follow attempt from right in front of the basket in the final minute of Game 7 with San Antonio trailing by two. Not even getting back to the finals again with the league's best record can make him forget.

"It lasts. I have a very good memory, especially for my misses and losses. You keep those, you learn from them and you hope to change them next time," Duncan said.

"That stuck with me and obviously it's always in the back of my mind, and every time I see anything to do with that, it pops right back in."

James had similar regrets in his first finals with Miami in 2011, but it's been all smiles since. The Heat are the first team to play in four straight finals since Boston from 1984-87, and can become the first three-time champion since the Lakers more than a decade ago.

But their focus is only on winning the next title, not reminiscing about the last couple.

"Last year is last year and we're excited about it, but this trophy this year belongs to nobody," James said. "It's up for grabs."

Both teams have reason to think they will win it. Wade is much healthier than last year, when he needed extensive treatment before Game 7, and the Heat have been able to get him extra rest by losing just three games in the first three rounds.

The Spurs' Manu Ginobili is also in much better shape this year and Patty Mills has emerged as an effective point guard off the bench, giving San Antonio options if Parker is slowed by the sore left ankle that knocked him out of Game 6 of the Western Conference finals.

It's the sixth finals for the Spurs since 1999 and Miami's fifth in nine years, but both face uncertain futures. Duncan, Parker, Ginobili and coach Gregg Popovich could be near the end of their run together. James, Wade and Bosh can all become free agents this summer.

That's for July. For now, maybe the teams can duplicate last June.

"You hope it's going to be a great series for both teams' sake, for the fans that love our game," James said. "You hope it can be one of the great finals appearances."

Adding Insult To Injury
The Heat simply had no answers for LeBron, AD and the Lakers in Game 1. And devastating injuries certainly didn't help Miami.
8 hours ago

How To Bet The NBA Finals
Everyone is expecting a Lakers title, but is it worth your money? Jason McIntyre explains why he's looking to fade LeBron.
18 hours ago

Expert Picks: Lakers vs. Heat
It's NBA Finals time and series predictions are flying. Was anybody bold enough to pick the Heat over LeBron's Lakers?
19 hours ago