The Atlanta Braves enter spring training with a familiar group on the mound — four 2018 regular starters and a merry-go-round of young arms now considered MLB-ready. The organization features 10 starting pitchers, many of them top prospects pressing for opportunity, with big-league starting experience, excluding right-handed starter Kyle Wright who debuted as a reliever last season.

The Braves exited the 2018 postseason with Touki Toussaint and Max Fried in their bullpen, but general manager Alex Anthopoulos' preference is to keep his stockpile of young starters stretched out, if possible. (A hyper-competitive division race could alter that plan.) Toussaint and Fried co-headline the wave of early-season starting options already in-house for Atlanta alongside Mike Soroka, a group rounded out by top prospects Wright, Bryse Wilson, Luiz Gohara and Kolby Allard. With the midseason pickup of Kevin Gausman and Julio Teheran's return for his ninth season with Atlanta, those names appear to be fighting for one available spot early on — barring an acquisition, injury or trade.

Atlanta could turn to a de facto six-man rotation with a revolving door of young starters — particularly with left-hander Sean Newcomb's ERA improving from 5.61 with four days' rest to 3.20 with an extra 24 hours last season — using player options and the injury list to shuttle arms between Triple-A and the majors.

Still, Toussaint, Soroka and Fried stand at the front of the pack.

The Braves will likely elect to exercise caution with Soroka, who is returning from season-ending shoulder inflammation, leaving the young postseason roster inclusions as Opening Day favorites. Toussaint may have the highest ceiling of the group and a 3.33 ERA in his first five MLB starts proved his repertoire can befuddle major-league hitting, but Fried's numbers were even better when healthy last season (1.38 ERA, 2.08 FIP) and he'd add a second southpaw to the rotation.

The Braves have decisions to make but, in this case, a wealth of promising options might mean there's not a bad choice.

2 Will Mike Foltynewicz take yet another step forward?

Mike Foltynewicz is a model for trusting in talent and practicing patience. Here's what that looks like over his four-year stint in Atlanta:


In his first career All-Star season, Foltynewicz finished eighth in the NL Cy Young voting and kept statistical company with some of baseball's best pitchers. His ERA dropped by nearly two full runs. Per Statcast, he cut his expected weighted on-base average allowed from .340 to .274. That's a top-of-the-rotation arm any way you slice it.

The 27-year-old could have more in the tank, though. In last year's second half, he improved in the following categories: opponent OBP, opponent slugging, weighted on-base average allowed, fielding-independent pitching and strikeout-to-walk ratio. That could be the difference in a four-win player and a six-win player.

Sean Newcomb set the tone for his 2018 campaign in his first two starts: Getting knocked around by the Nationals before tossing six shutout innings at Coors Field. The big left-hander’s season was quite the ride, pitching like an All-Star for long stretches then testing the Braves’ patience one month later. Newcomb’s rolling five-game averages for adjusted ERA and adjusted FIP illustrate this roller-coaster fairly well (lower numbers represent better production, 100 being league average): 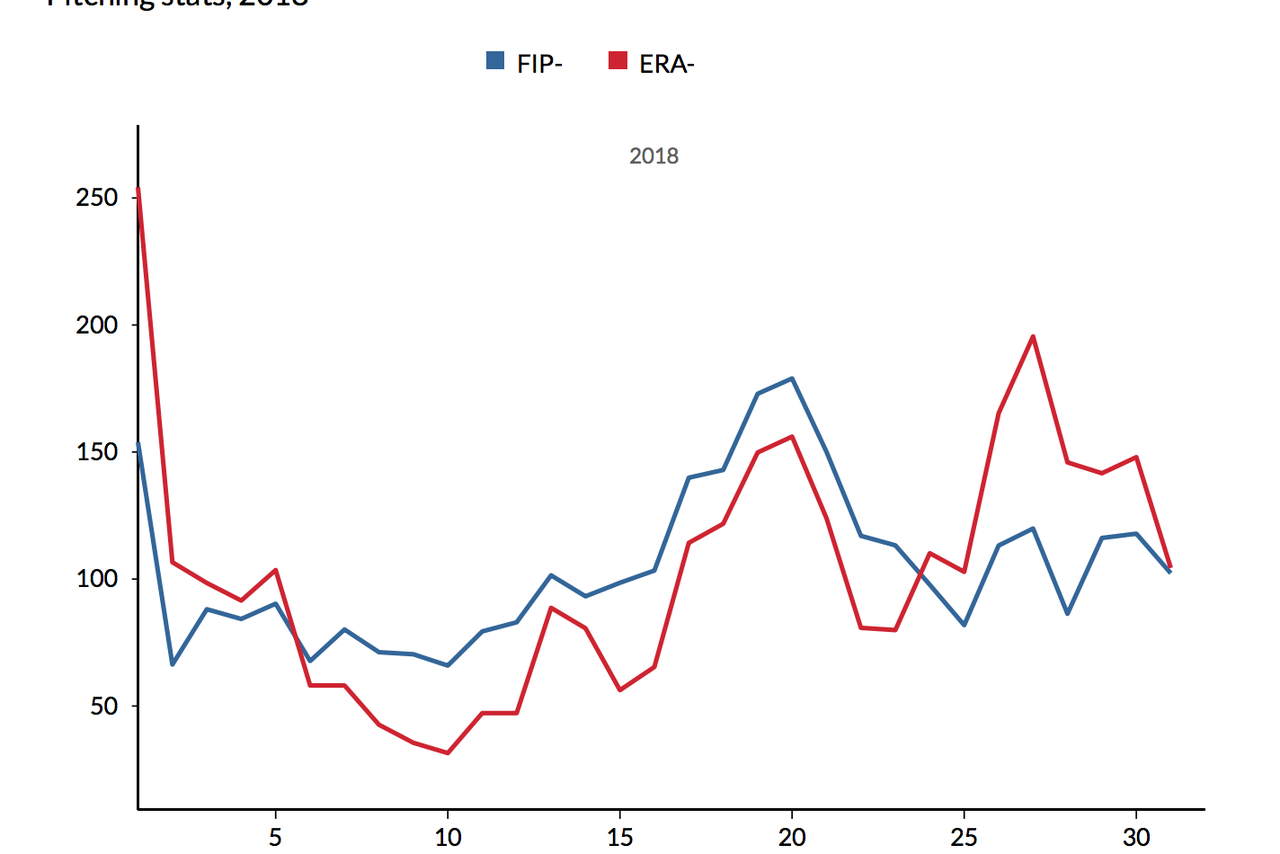 At the end of the year, Newcomb got things in order just in time to make the Braves’ postseason rotation as a bullpen piece only to be called upon for the NLDS Game 3 start, helping his club win its first playoff game since 2013. He allowed just one run on two hits and three walks in his first taste of playoff baseball, excelling as both starter and reliever against arguably baseball’s best lineup.

If the Braves can get a more consistent effort out of the lone left-hander comfortably projected to make the Opening Day rotation, it will go a long way toward addressing question marks after Mike Foltynewicz and Kevin Gausman.

The 28-year-old right-hander and longest-tenured Braves pitcher watched his walk rate skyrocket to a career-worst percentage (11.6), tied for the worst mark in the majors among qualified starters. The front office says he wasn’t wild, though. He was nibbling.

“The walks were up but obviously the hits were down. His ERA is a half a run lower that it was. Strikeouts are up and the walks are up. And I think if you ask Julio it’s because he was wild, by design he picked at the corners and wouldn’t give in and that’s why he didn’t give up the hits. He’s going to give up home runs, that’s who he is, it’s part of his game."

There are reasons for concern, though. For one, Teheran allowed much harder contact than he ended up getting charged for — Statcast claims that his expected weighted on-base average was 26 points worse than the 2018 outcome.

In fact, no other qualified starter in baseball found more good BABIP fortune than Teheran … and it wasn’t close. Here’s the five lowest batting averages on balls in play allowed with two Braves arms making the cut:

It’s a good group to be a part of, but Teheran notched the worst walk rate, home-run rate and groundball rate of the group by far, which is why those other four pitchers averaged 4.2 WAR and he sat just above replacement level.

Atlanta sees value in Teheran’s reliability, and for a young rotation with unknown workload capacities there is inherent value in a veteran player with no injury history.

"It’s basically 180 innings out of him, locked in each year," Anthopoulos said. "You can count on him.”

Innings still need to be quality innings, though. As Teheran enters the final year of his contract extension — the Braves still hold a $12 million club option for 2020 — we’ll see if he found workable solution or if his new style of pitching yields diminishing returns.

55: Braves starters finished the 2018 season tied with the Mets rotation for the fourth-best average game score (55), behind only Houston, Cleveland and the Los Angeles Dodgers.

.265: No rotation in baseball allowed a lower batting average on balls in play than the Braves.