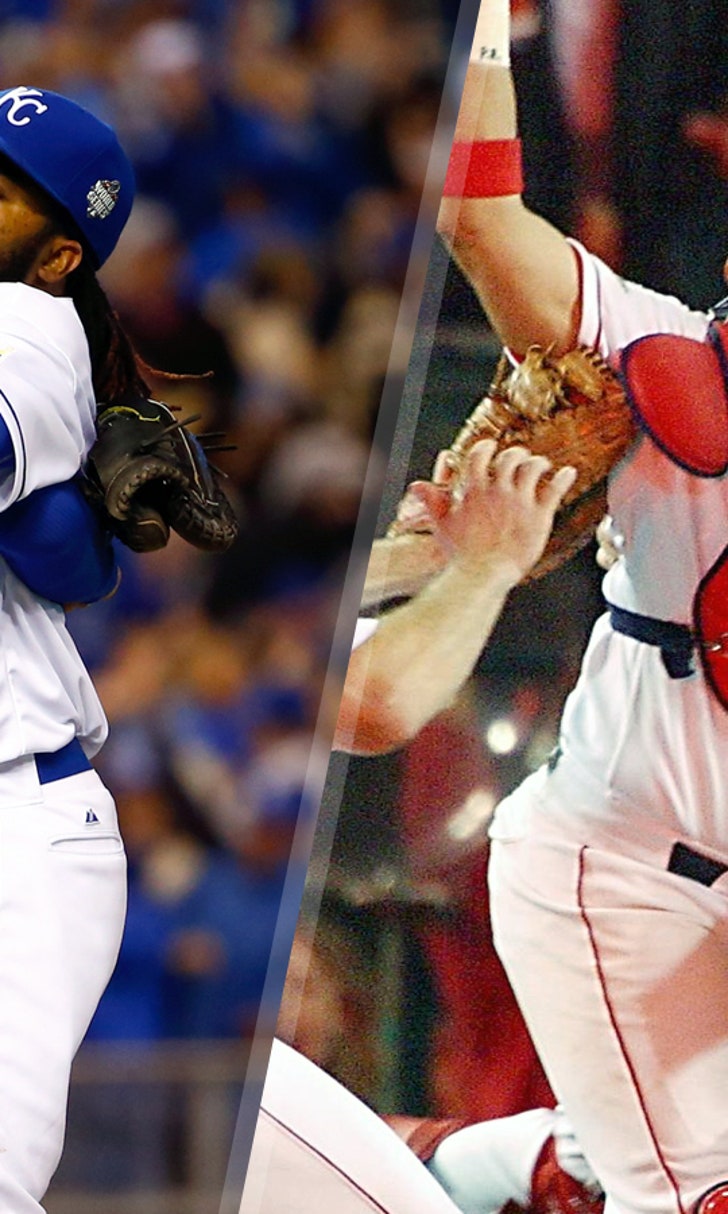 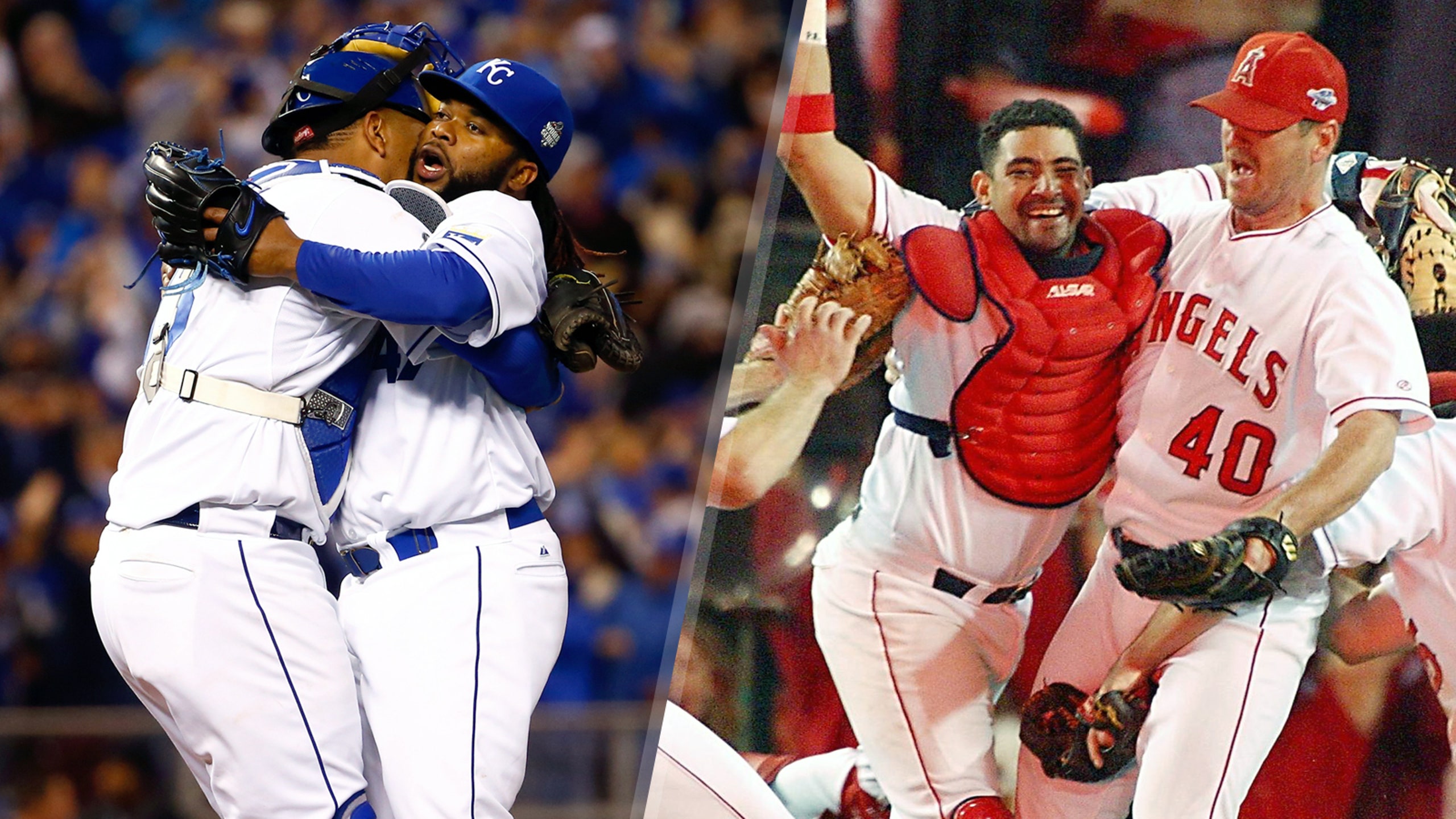 Let's talk about contact. It's what everybody else is doing, right? The Royals make a lot of it. They did all season, and they still are in the playoffs, even against Matt Harvey and Jacob deGrom. No team this season posted a lower strikeout rate; no team was even particularly close. Contact is the skill around which the Royals lineup is built.

Right around the end of the regular season, I wanted to try to put these Royals in some kind of historical context. I wanted to know how good they are at hitting the ball, relative to other teams over the past several decades, but it's not as easy as just looking at the strikeouts because whiffs have increased over time, especially lately. You have to make adjustments, so I folded in yearly league averages and standard deviations. What I found: by the resulting measure, the Royals were baseball's best contact-hitting team since at least 1950. I went back no further, because I didn't see the point.

It's interesting, that conclusion. 1950 was a long time ago, and an awful lot of baseball has happened ever since. Mickey Mantle hadn't debuted yet; Dave Winfield hadn't been born yet. So it's notable to post the most extreme anything between 1950 and 2015. In taking the top spot, the Royals just barely edged out the runner-up. The team knocked into second place was the 2002 Angels.

Immediately, that catches your eye. The Royals are the best contact-hitting team in ages. Those Angels were the second-best contact-hitting team in ages, and they won the World Series. For Royals fans, that's encouraging, probably, and from my standpoint, now that I think about it deeper, there are a ton of parallels between these two ballclubs, even beyond putting the ball in play. Those Angels might be the best historical comparison for what the Royals currently have going on.

Obviously, the Angels and Royals each finished with the lowest strikeout rates, by a good margin. That much has already been established. In part responsible was general team aggressiveness. The Royals just finished with baseball's lowest walk rate. The Angels finished third from the bottom. The lineups have their share of power, but it doesn't overwhelm -- the Royals finished 24th in home runs, while the Angels finished 21st. But both teams finished fifth in total stolen bases, indicating a fondness for putting the game in motion. It's a style Royals manager Ned Yost likes; it's a style Angels manager Mike Scioscia likes.

It's remarkable how similar the offenses look, and taking the full-season numbers doesn't give the Royals credit for replacing Omar Infante with Ben Zobrist. Yet there's still a lot more we can say. In 2002, the Angels finished with baseball's lowest batting average allowed on balls in play, suggesting a good team defense. The Royals just finished in the top five. And then you get the pitching staffs. Come playoff time, the staffs were similarly built.

The Royals' playoff starting rotation is Johnny Cueto, Edinson Volquez, Yordano Ventura, and Chris Young. They've all had their moments of looking good, and Cueto just threw that two-hitter, but this isn't a group that has a shutdown ace. Cueto was supposed to be that guy, but that guy hasn't shown up consistently since the midseason trade. This is a group of adequacy, a group that can be counted on to do just enough to get the ball to the bullpen with a manageable score.

The Angels' playoff starting rotation was Jarrod Washburn, Kevin Appier, Ramon Ortiz, and John Lackey. I know this is asking you to go back a ways in your head, but that isn't a group with an ace, either. Washburn had a shiny ERA, but he was more like a dependable No. 2 or 3. Appier was nearing the end of the road. Ortiz didn't become what he was supposed to become. Lackey was a rookie then, but it would be a few years before he established himself as a quality starter. As with the Royals, this group was by no means bad. But there's not a guy in there you'd be afraid of.

We're left now with the bullpens. You know all about the Royals bullpen -- Wade Davis is maybe the best reliever in the game. He's supported by the occasionally-unhittable Kelvin Herrera, and Ryan Madson isn't so bad himself, playoff homers aside. Luke Hochevar is useful. Danny Duffy's shown promise in relief. This is all familiar.

If you'll recall, it was the 2002 Angels who introduced the world to Francisco Rodriguez. He appeared on the roster at the last minute, and he supported Troy Percival, who wound up close to the American League lead in strikeout rate for relievers. People are less inclined to remember Brendan Donnelly, but he was fairly dominant, too, and Ben Weber was a groundball machine. During the year, Percival, Donnelly, and Weber combined for an ERA that was about half of the league average. To that trio, the postseason Angels added Rodriguez, turning the back of their bullpen into something absolutely fearsome.

I've gone on at length here, which might seem like a waste of time for something that could be quickly expressed in a sentence. Just because the Royals have a lot in common with some other team from the past doesn't mean they're guaranteed to end up at the same destination. But I'm struck by just how similar these two teams really are, in just about every area, and it's worthwhile to be reminded of previous editions of this kind of ballclub. The Royals didn't invent this. They're just playing the hell out of it. They're playing in a way that would make Mike Scioscia proud, because they're playing like the champion Angels, and now they're close to holding the same trophy. The Royals have staged their comebacks. The Angels had a late-inning miracle of their own.