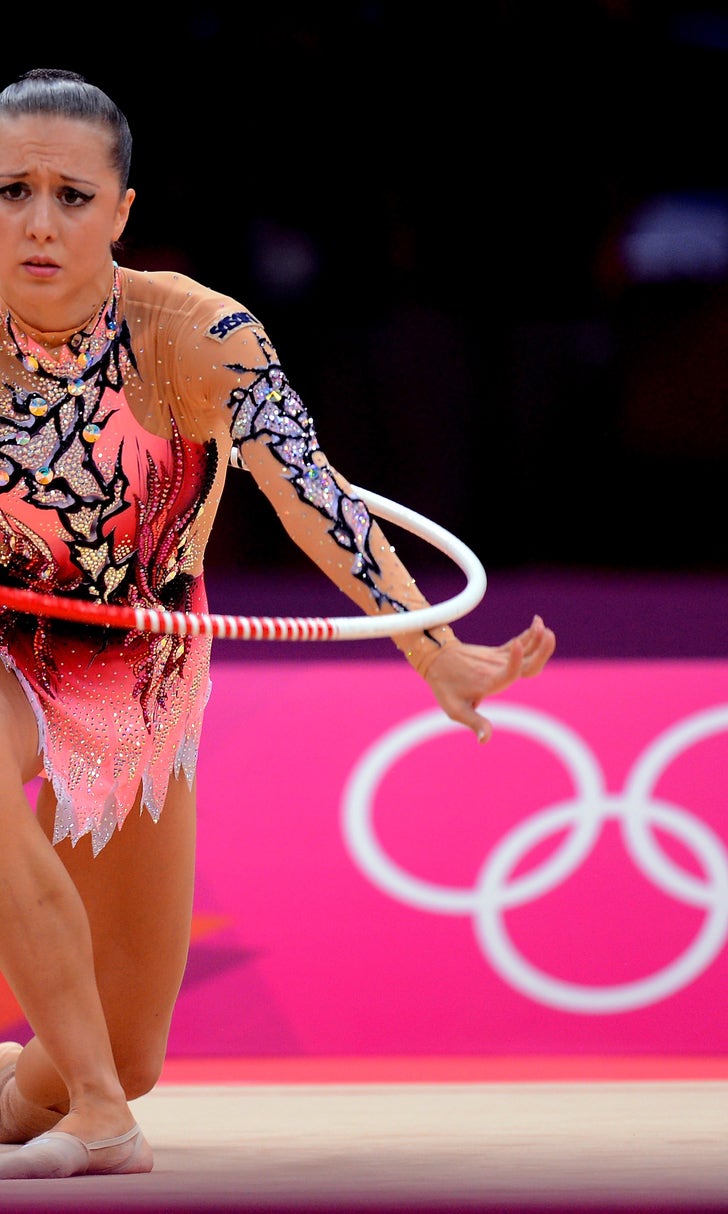 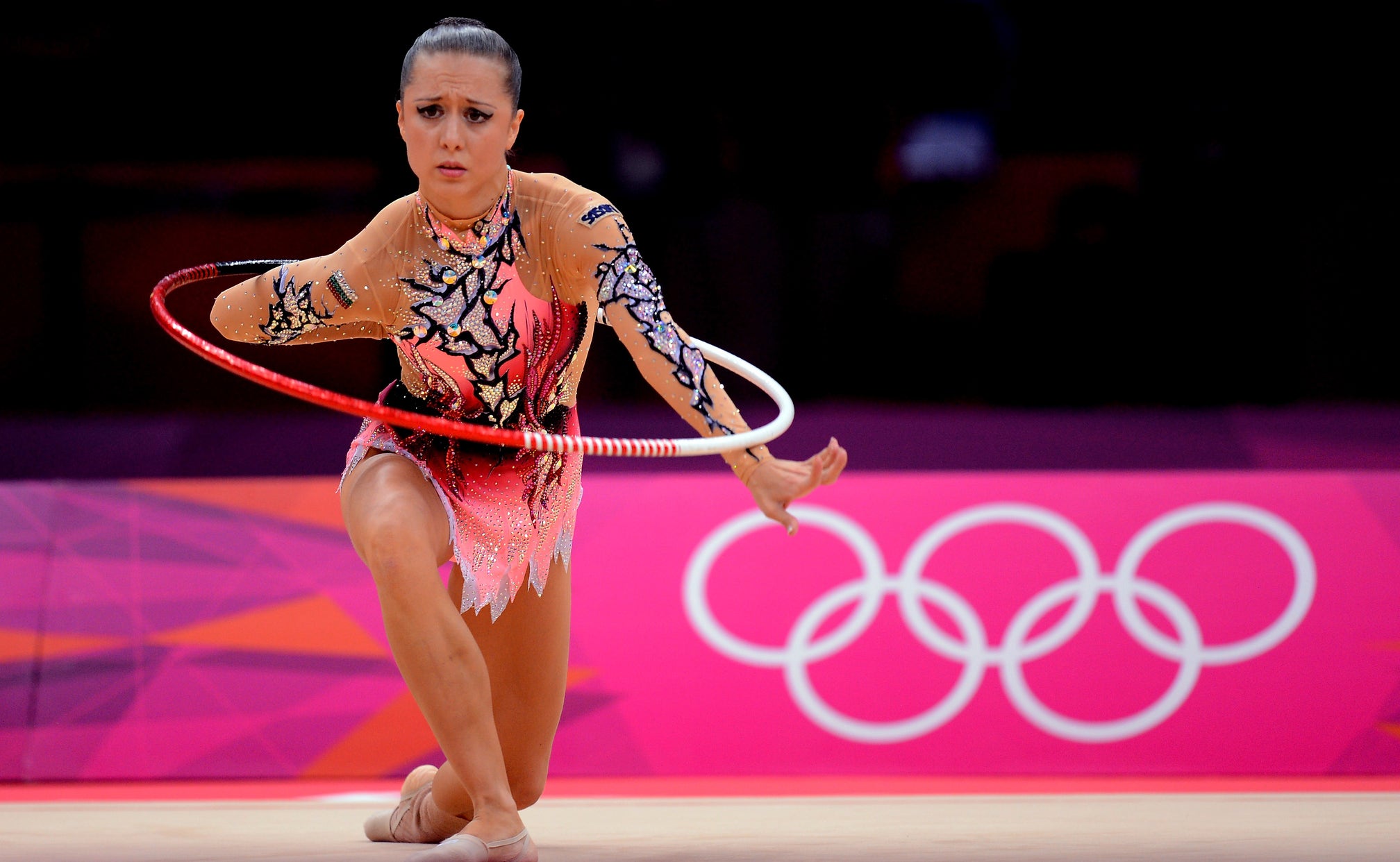 5 sports that don't belong in the Olympics 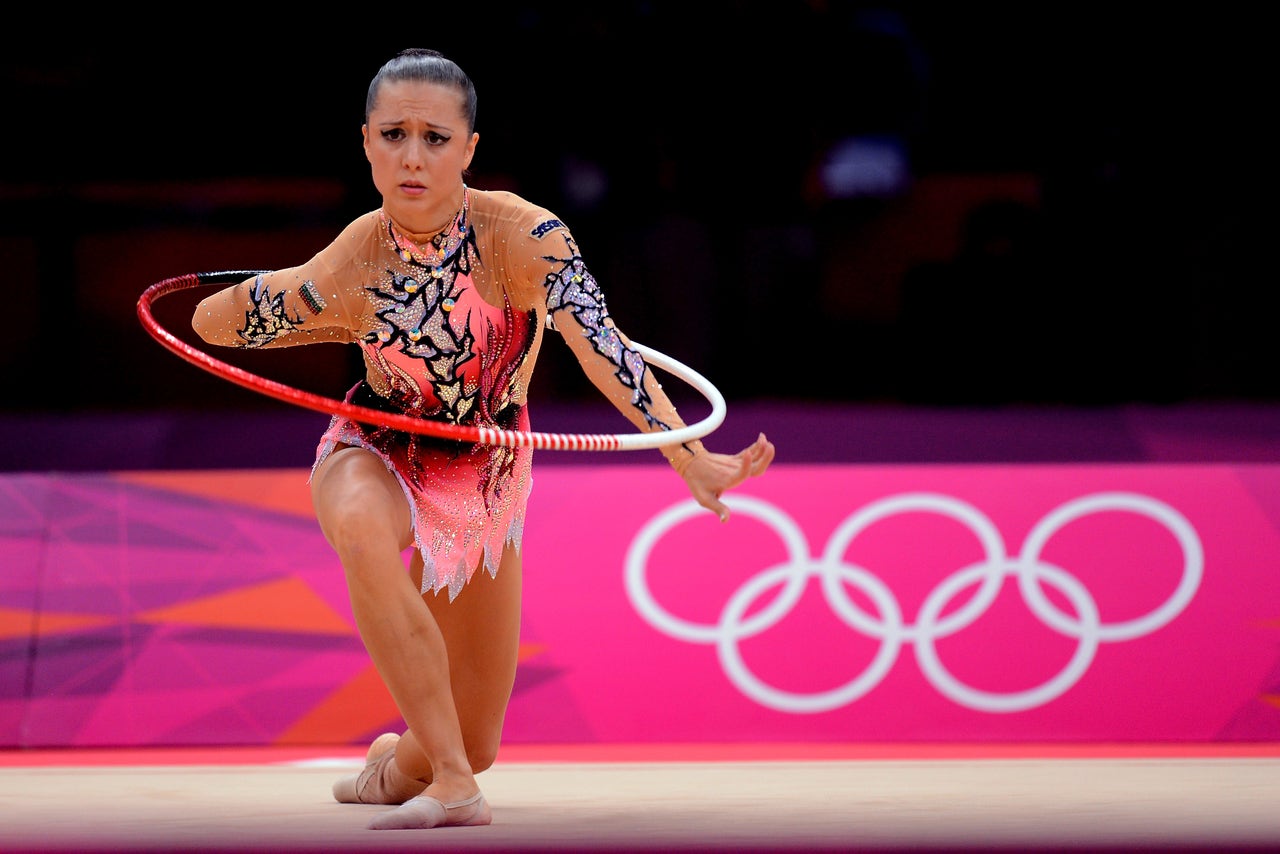 Hi, my name is Chris Chase and I'm an Olympics junkie. Over the fortnight beginning Friday, I will spend approximately  384-straight hours on various spots on my couch, watching some of my favorite (and most popular) Olympic sports (such as swimming and track), mixing that with sports I love but only see during the Summer Games (indoor cycling, kayaking, rowing, Bob Costas-eye anatomy), combining that with sports that are enjoyable solely because there's something big on the line (archery, beach volleyball, basketball, soccer) and, most important of all, attempting to get the food delivery guy to come directly inside the house to save me the trouble of getting the door. (It's my best chance at Olympic gold.)

But for all the great sports I'll watch and write about, there's a group of lesser events from which I'll shield my eyes (and my remote from CNBC), lest they ruin my love of the movement Olympic. Some of the sports on the list make me shudder but clearly belong in the Games (you know we're talking about you, diving). Then there's another set - a list of five - that have no business in the Olympics and should be banned immediately, as if they were the event equivalent of Russian weightlifters. That list:

1. Judo - There are currently two martial art disciplines in the Olympics (with more to come) which is probably two too many. You could spend 45 minutes trying to understand the difference between judo and taekwondo and still not fully understand what separates the two. (From what I can gather, the former is all about trying to throw your opponent to the mat, the latter is what Chuck Norris does in Walker, Texas Ranger.)

(BTW: Note the back-to-back special appearance/guest stars on the credits of this Walker ep: Deion Sanders and Gary Busey. Oh, to have been working the craft services table that week.)

A judoka wears no safety protection which, counterintuitively, makes me like the sport less. Though the whole headgear thing in boxing and taekwondo is sort of a buzzkill, at least we know these sports are dangerous enough to warrant such equipment. Judo just gives you an oversized robe. That being said, if you took judo out of the Olympics but secretly switched it with taekwondo and actually kicked that sport out of the Summer Games, me and 98% of domestic viewers wouldn't know, or care, enough to notice.

2. BMX Cycling - If you can build the course for any Olympic sport on an original Nintendo game then you, my friend, do not have an Olympic sport.

Also, BMX was created and popularized in California and then brought to the Olympics in 2008. Since then, four gold medals have been awarded in the sport, none to an American. In 2012, U.S. riders were left off the medal stand completely, which is sort of like losing an apple pie-making contest with Bhutan. (Insert witty, timely outsourcing joke.)

Wrestling - Oh, I'm kidding wrestling fans. Of course wrestling should be an Olympic sport. That the IOC ever suggested it shouldn't is proof enough that the only thing the organization is good at is a) graft and b) being wrong about which sports do and don't belong in the Olympics. Oh, that and getting worked over by Putin.

3. Rhythmic Gymnastics - Look, rhythmic gymnastics - the one with the ribbon, ball, hula-hoop, rope and clubs - get a bad rap.

What? Oh, you thought we were setting up for a modifying "but" at the end of that sentence. No, not at all. Rhythmic gymnastics get a bad rap. Period. It completely deserves it. They spin ribbon for Pierre de Coubertin's sake! It's like watching the volunteers at the mall during Christmas season, only they're not wearing awesome sweaters like those ladies. They throw balls into the air and catch them on their feet and we're supposed to act impressed even though we saw an orca do the same thing when we visited Sea World in 1993.

Our Olympic disdain has nothing to do with rhythmic gymnastics being a tremendously difficult discipline and pretty cool to boot. But so are Cirque du Soleil and water slides and you don't see either of those on the Olympic schedule. (Though I suppose if you give it long enough, water sliding will eventually be forced upon us in a few years to keep up with that key, aged 8-18 demographic. It'll probably share an Olympic night with American Ninja Warrioring.)

4. Rugby Sevens - I can remember watching every Olympics back to 1984. I can remember discussing every Olympics back to 1988. I have read, learned and absorbed the history of every Olympics that's ever been competed. And not once have I heard, or read, anyone say they believe that the Olympics are somehow lesser an event because rugby sevens aren't competed. Who knows though? Maybe that's just because no one had heard the "sevens" qualifier before. Isn't it odd they let in a modified version of a sport? It'd be like if football finally got into the Olympics but as an 8-man flag football event instead. (Football has no business in the Olympics either, by the way.)

Golf - At this point, I don't even think golf considers itself an Olympic sport, so we'll move on.

5. Trampoline - How did thi$ one get pa$t the IOC? Do you think they just went into a brainstorm session and someone said "kids toys" and then they filled a white board with capture the flag, dodgeball, Candyland, tag, freeze tag, TV tag, tag sevens, various international forms of tag we don't even know about, permanent-QB football, wiffle ball, H-O-R-S-E, around the world, knockout, the soccer form of knockout and quidditch? Then they voted and trampoline narrowly won over slip'N slide?

When you see highlights from this event (probably in a 45-second primetime package on NBC), you'll look at how high competitors jump and how many flips and twists they do and be in awe. Do not let this fool you into thinking trampoline is a reasonable or real Olympic sport. I went to a "bounce house" birthday party with my daughter on Saturday and there was this kid who, in the span of 45 minutes, went from bawling his eyes out to flipping around like Mary Lou Retton and looking like a reasonable bronze-medal bet. 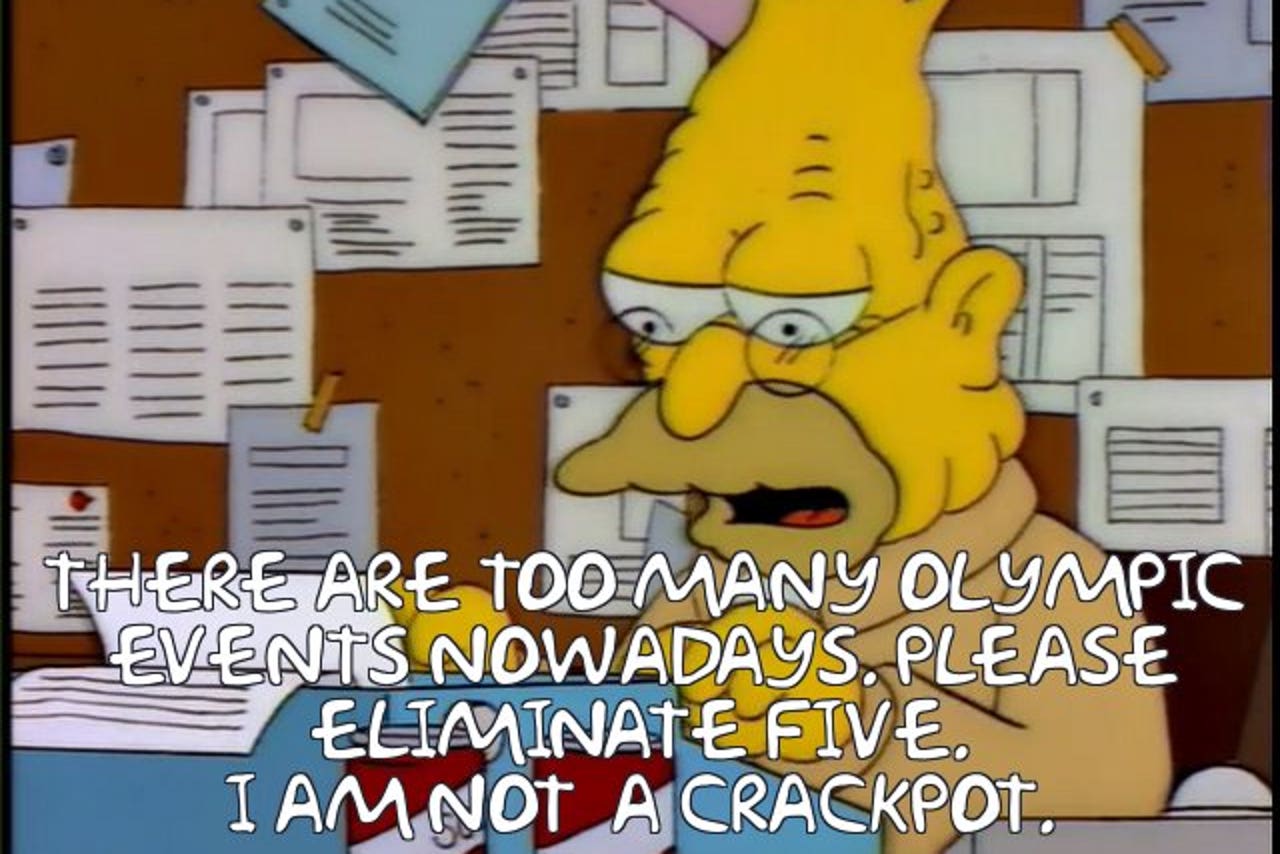 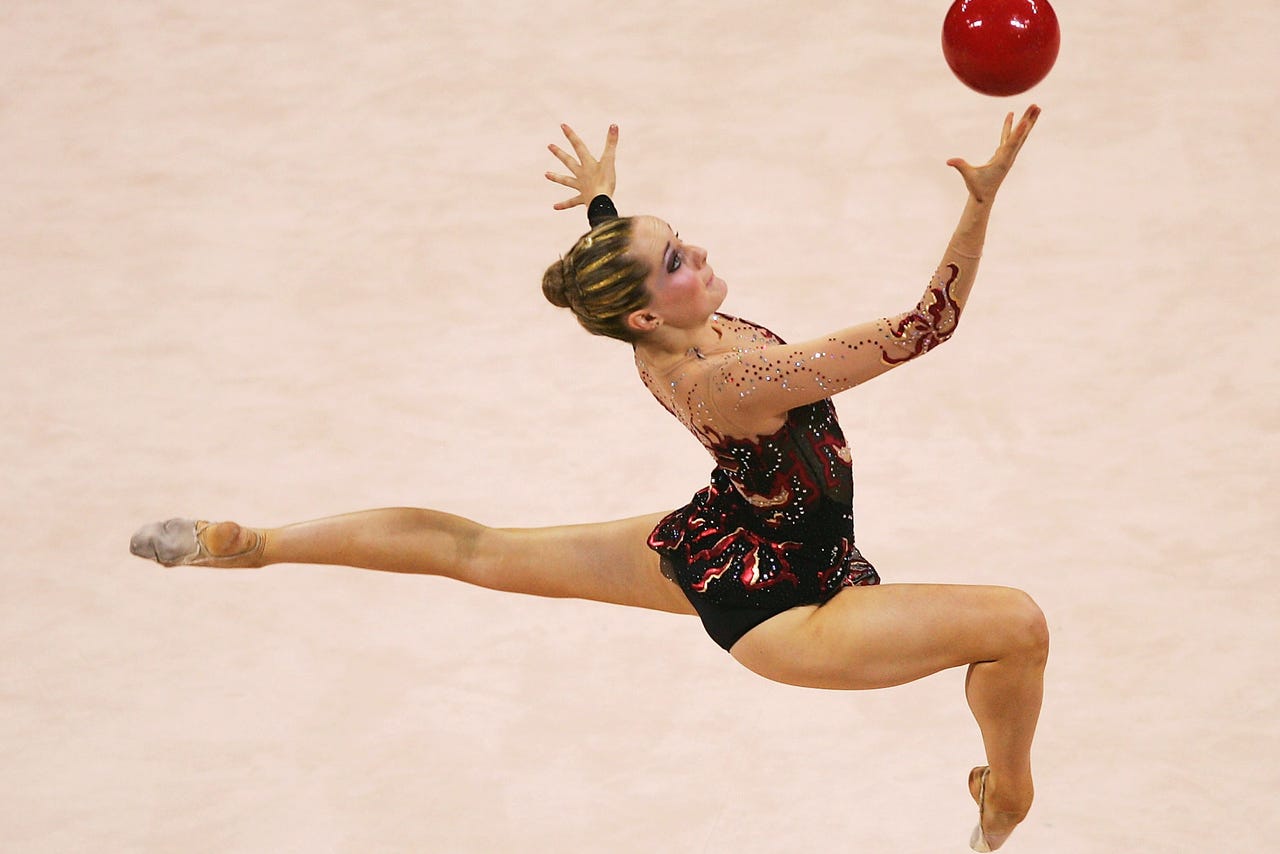 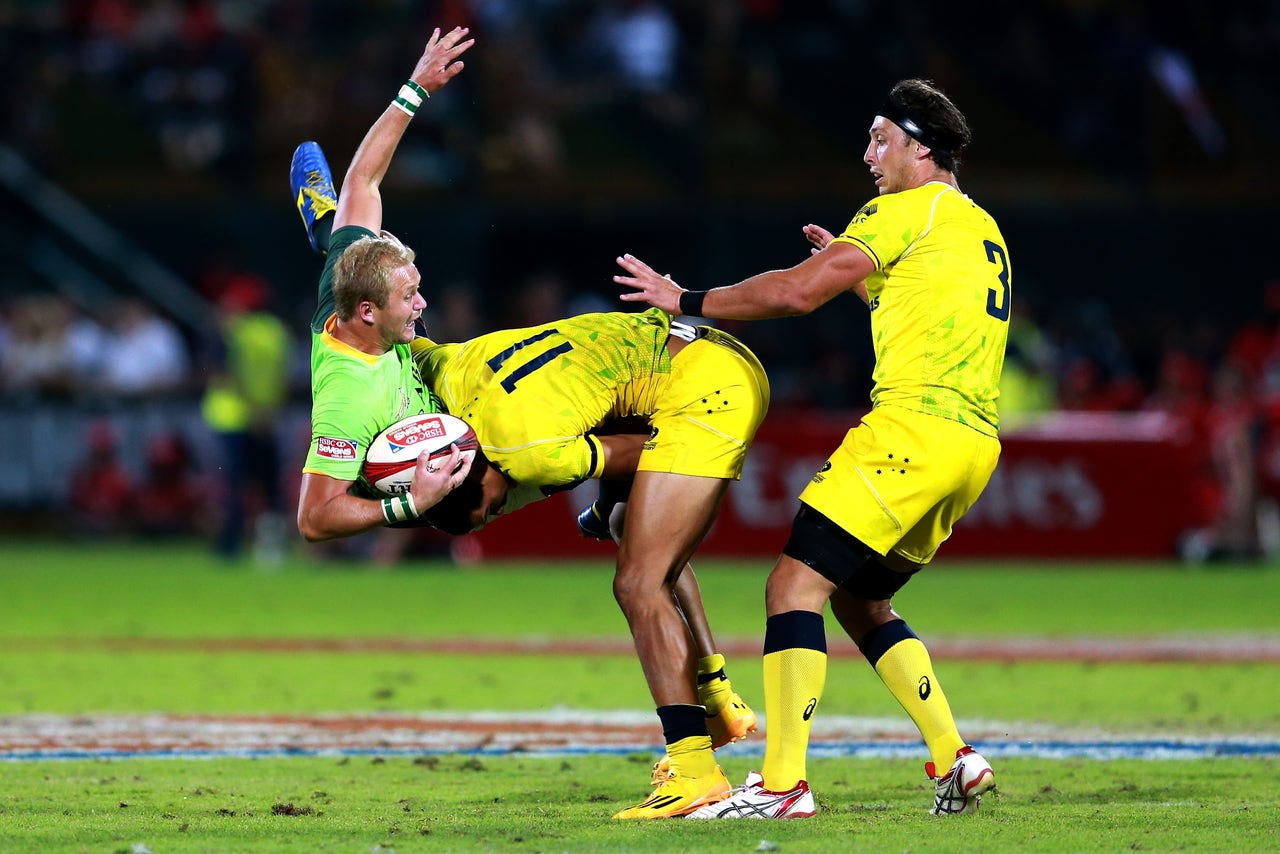 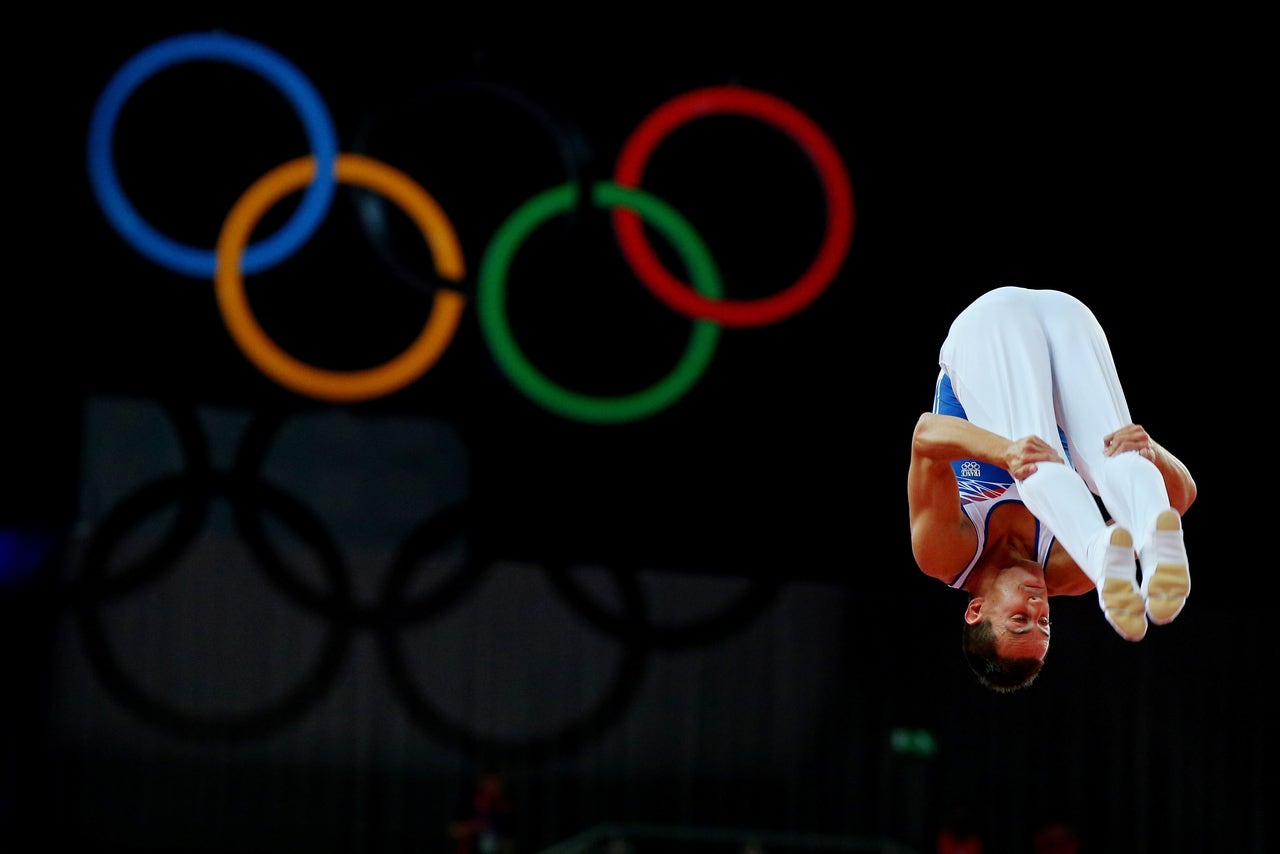