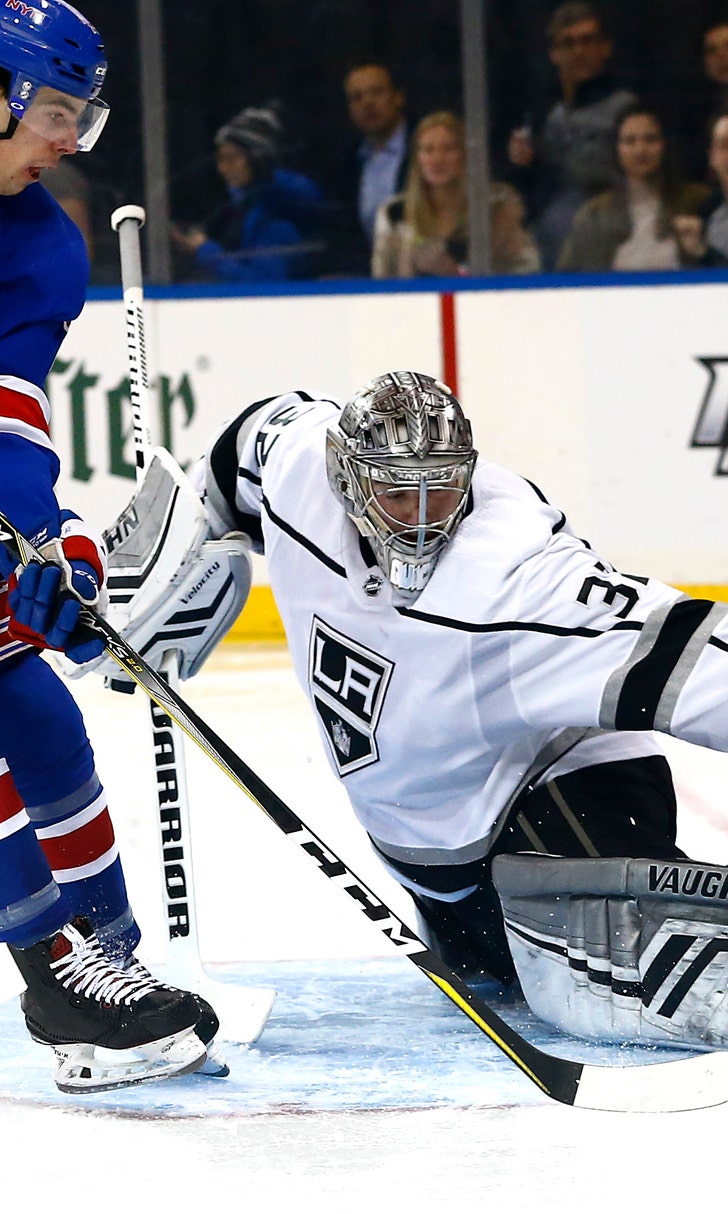 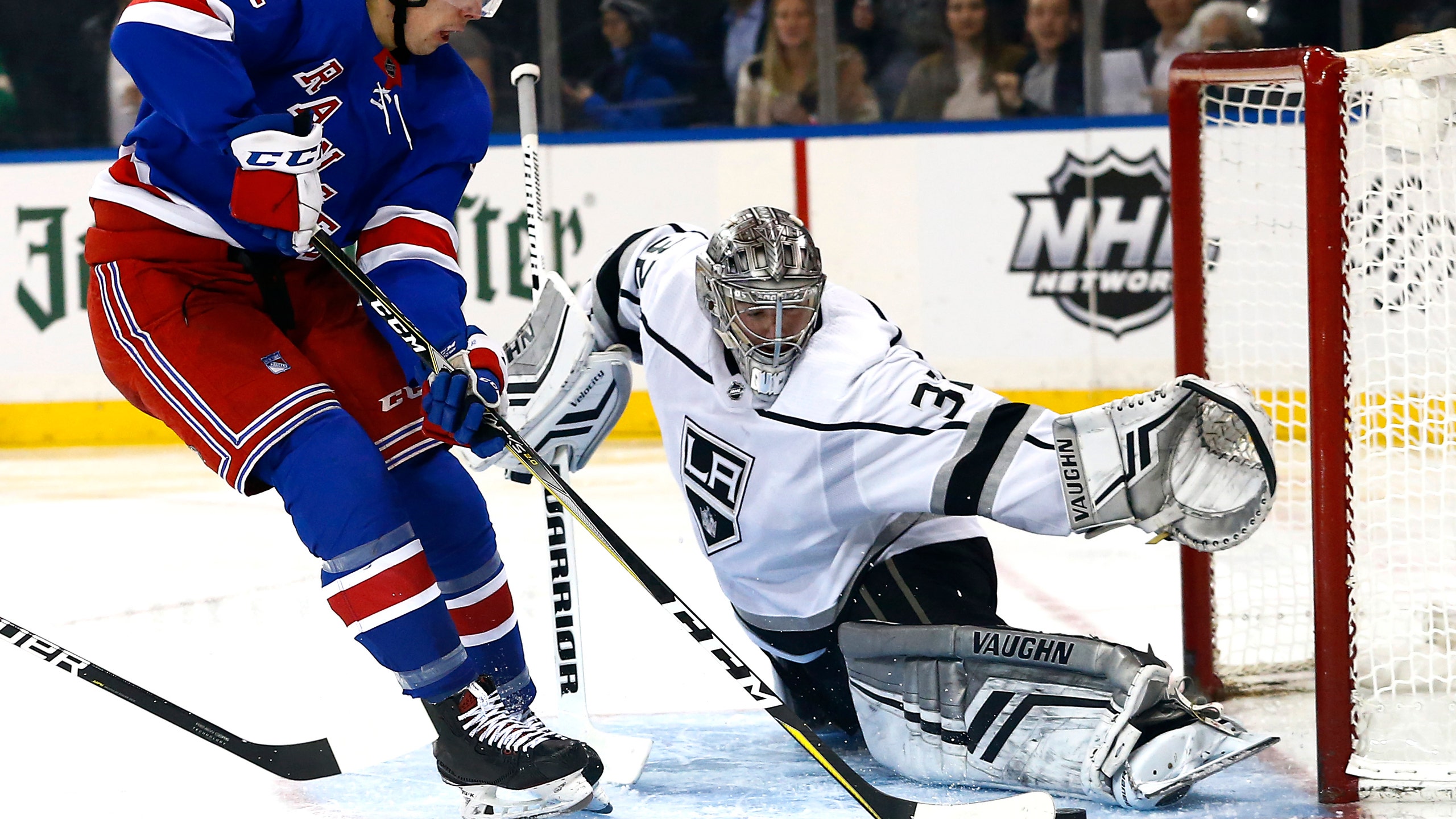 NEW YORK (AP) — The Los Angeles Kings have had a tough time winning this season.

Against the New York Rangers on Monday night, a late goal and a shot in overtime that clanged off the post helped secure a needed victory.

Tyler Toffoli scored 25 seconds into overtime as the Kings rallied to beat the Rangers 4-3.

Toffoli's ninth goal of the season came moments after the Rangers' Mika Zibanejad rang the puck off the post behind Kings goaltender Jonathan Quick. Toffoli was mobbed by his teammates as Rangers netminder Henrik Lundqvist skated away in disgust.

"We were in it the whole game and we found a way to come back," Toffoli said. "I think it was overdue for us. We are really happy with this win."

Adrian Kempe, who assisted on the overtime winner, scored twice and Anze Kopitar added a goal for the Kings, who scored in the last minute of regulation and the first minute of 3-on-3 overtime.

Toffoli and Michael Amadio assisted on the tying goal off a scramble in front of Lundqvist. Quick finished with 24 saves.

"They found a way to tie it," Rangers defenseman Marc Staal said. "And overtime isn't real hockey, so anything goes there."

Zibanejad, Chris Kreider and Adam McQuaid scored for the Rangers.

Lundqvist, who made 26 saves, was exasperated after yet another excruciating home loss. The Rangers have four overtime defeats at Madison Square Garden this season and two more in shootouts.

"That overtime goal sums it up — not only this game but a lot of games," he said. "It's just really frustrating. Not getting rewarded two points for this effort, that hurts."

The Kings tied the game at the 19-minute mark of the third on Kempe's second goal of the game and seventh of the season after Los Angeles had pulled Quick for an extra skater.

"You've got to play 60 minutes," Rangers coach David Quinn said. "I thought as the game went on we got more sloppy. You've got to finish the job."

McQuaid had put the Rangers ahead 3-2 at 9:15 of the third when his fluttering shot from the point eluded Quick. It was McQuaid's first goal of the season and his first as a member of the Rangers.

The Rangers top line of Kreider, Zibanejad and Mats Zuccarello continued to surge. The trio has 39 points — 18 goals and 21 assists — over their last eight games together.

Despite his stellar production lately, Zibanejad was frustrated after a vexing and stunning defeat.

"We put ourselves in a great place to win, but we couldn't close it," said Zibanejad, who has had multi-point games in four of his last five contests. "It's just disappointing."

Kreider opened the scoring with his team-leading 24th goal at 8:32 of the first period. The goal came on a crisp cross-ice pass from defenseman Tony DeAngelo, who had been healthy scratch the past two games. Zibanejad also assisted.

Kempe tied it for the Kings at 17:23 of the first on a setup by former Ranger Carl Hagelin and former New Jersey Devil Ilya Kovalchuk. It was Kempe's first goal since Dec. 11.

Zibanejad put the Rangers back on top 32 seconds into the second period with his 21st goal. It was his ninth goal in the last seven games, which included his first hat trick as a member of the Rangers on Jan. 31 against the Devils in Newark.

Zibanejad has 10 goals and eight assists over in his last 11 games, and has a career-high 52 points this season.

Zuccarello and Staal assisted on Zibanejad's goal. That extended Zuccarello's consecutive games points streak to eight. The Norwegian forward has five goals and nine assists in that stretch.

Kopitar tied the game for a second time at 5:04 of the third with his 16th goal of the season. Kovalchuk had the lone assist.

The Rangers were coming off a 3-2 loss to the league-leading Tampa Bay Lightning on Saturday night, while the Kings, who have the fewest points in the Western Conference, were playing the second game of a six-game trip. They lost 4-2 to Islanders on Saturday night.

In a season of struggles, Monday night's victory represented much needed relief for his squad, Kings coach Willie Desjardins emphasized.

"Our guys are excited. It was a good feeling tonight winning," he said. "Quickie was great for us and we found a way."