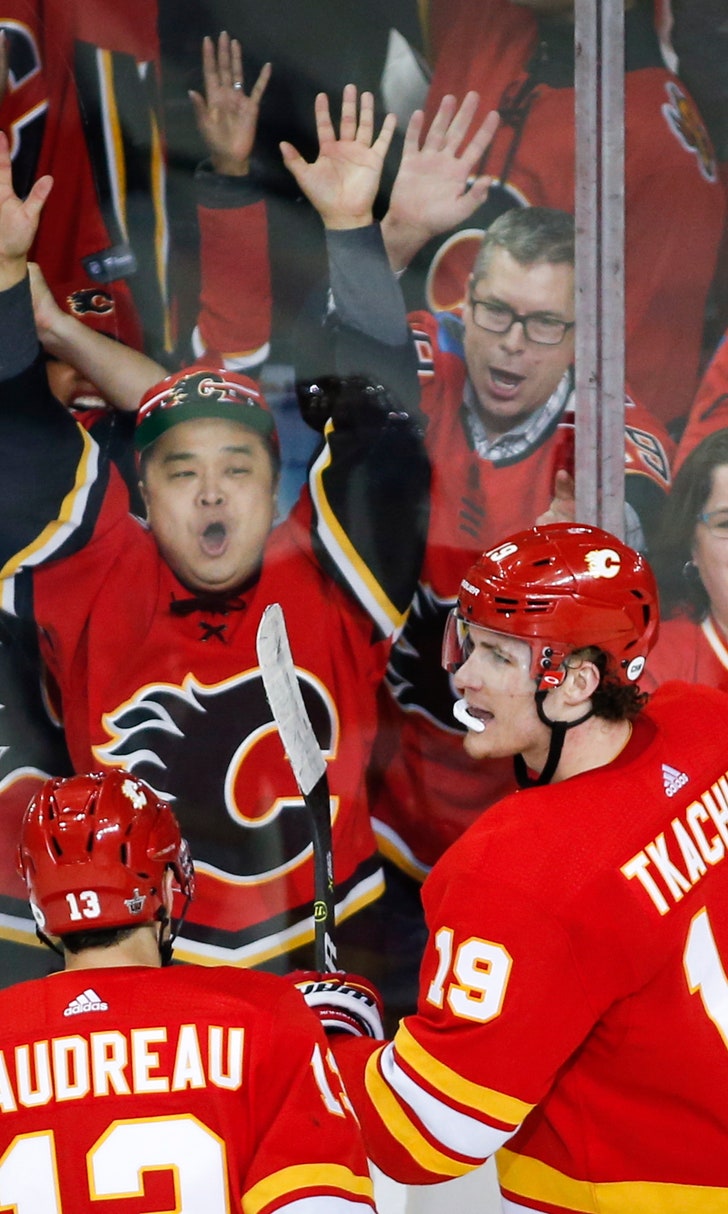 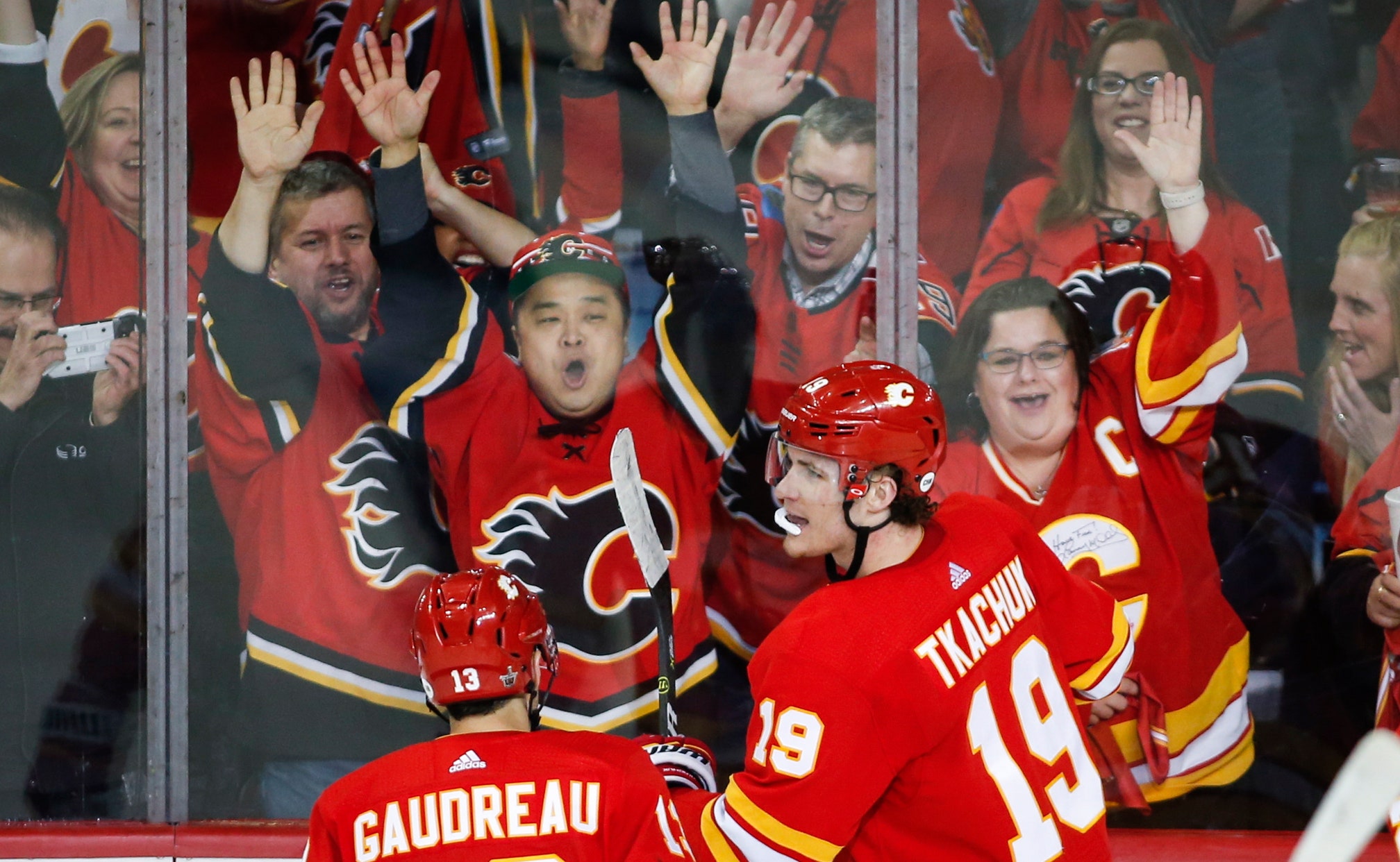 CALGARY, Alberta (AP) — The buzz in the crowd started when Mike Smith came up big with some slick saves during the second period. The chants of "Smitty! Smitty! Smitty!" continued throughout the rest of the game — until the veteran goaltender and the Calgary Flames finished off an impressive playoff victory.

"I haven't quite heard anything like that before in my career," Smith said. "It gives you some confidence when you hear your name getting chanted."

Now is as good a time as any for Smith, who made 26 saves for his first playoff shutout in nearly seven years as the Flames blanked the Colorado Avalanche 4-0 on Thursday night in Game 1 of their first-round Western Conference playoff series.

A key sequence came early in the second period when the Avalanche went to the power play for the third consecutive time. With all the momentum with Colorado, the 37-year-old Smith made two glove stops 30 seconds apart to keep the game scoreless.

First, he made a backhand snag off the stick of Gabriel Landeskog, who was left alone in front. Then, with a little extra flourish afterward, Smith threw out his glove to snag Derrick Brassard's dangerous snap shot. From that point through the end of the game, chants of "Smitty!" broke out regularly from the raucous, sold-out, red jersey-clad crowd.

The shutout was Smith's first in the postseason since May 20, 2012, when he made 36 stops while with the Phoenix Coyotes to shut out the Los Angeles Kings in Game 4 of the Western Conference final. The Coyotes lost the next game and Smith hadn't played a playoff game since.

"Great to see the fans really get behind him," Flames captain Mark Giordano said. "He's a big part of our team. He works his butt off in practice all the time. Can't be happier for him."

Matthew Tkachuk scored twice, and rookie Andrew Mangiapane and Mikael Backlund also had goals as Calgary won its first playoff game since beating Anaheim 4-3 in overtime on May 5, 2015.

And, Smith was a big reason the Flames — and their fans — went home happy.

"Our killers did an unbelievable job to kill off all those penalties," Smith said. "I was able to make a couple big saves there in the second, then we go down the ice and (Mangiapane) scores a big goal for us, so obviously that's a big momentum swing in the game."

It was a bit of a change for Smith, who wasn't exactly a fan favorite while struggling at times at home with an .889 save percentage.

"It felt a lot better than the other," Smith quipped, when asked how these chants felt.

It took until 14:25 of the second period for the game's first goal — but Mangiapane's unassisted score was a highlight-reel effort. The sequence began with Garnet Hathaway's heavy hit on Erik Johnson on the side boards. Mangiapane collected the loose puck and took it to the net where he weaved around Nikita Zadorov and carried the puck across the top of the crease before sending a backhander from his knees past a sprawling Philipp Grubauer.

Hathaway also had an indirect hand in the Flames' second goal later in the second as he was hauled down while sending a shot off the crossbar to draw a penalty. Calgary converted on the power play at 18:58 to take a 2-0 lead to the second intermission. On the goal, Mark Giordano's point shot was deflected out of the air by Tkachuk. Called a goal on the ice, Avalanche coach Jared Bednar challenged it, suggesting it was deflected by a high stick, but the goal stood after a lengthy review.

Tkachuk sealed it 14 seconds later with an empty-netter off an assist from Smith.

"The majority of this game I liked the way we played. I liked the speed we played with," Landeskog said. "But at the same time, I'd like to get something in front of Smith and take away his eyes. He's a big goalie. He makes the saves he needs to. I'd like to test him a little bit more."

NOTES: Grubauer made 28 stops for Colorado. ... The Flames finished the regular season on a 1-for-38 skid on the man advantage over the final 13 games. ... Calgary opened up the playoffs at home for the first time since 2006. ... It was the first playoff game as a head coach for Bill Peters, who failed to make the postseason in his four seasons with Carolina.

Game 2 is Saturday night in Calgary.