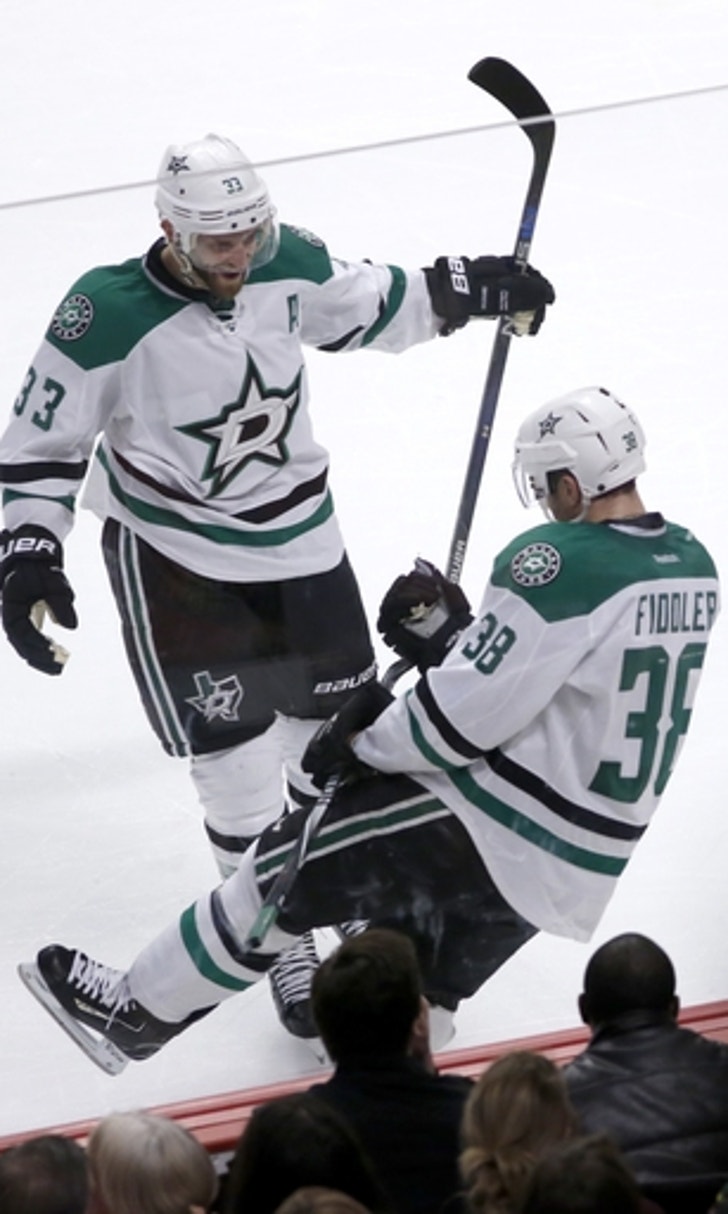 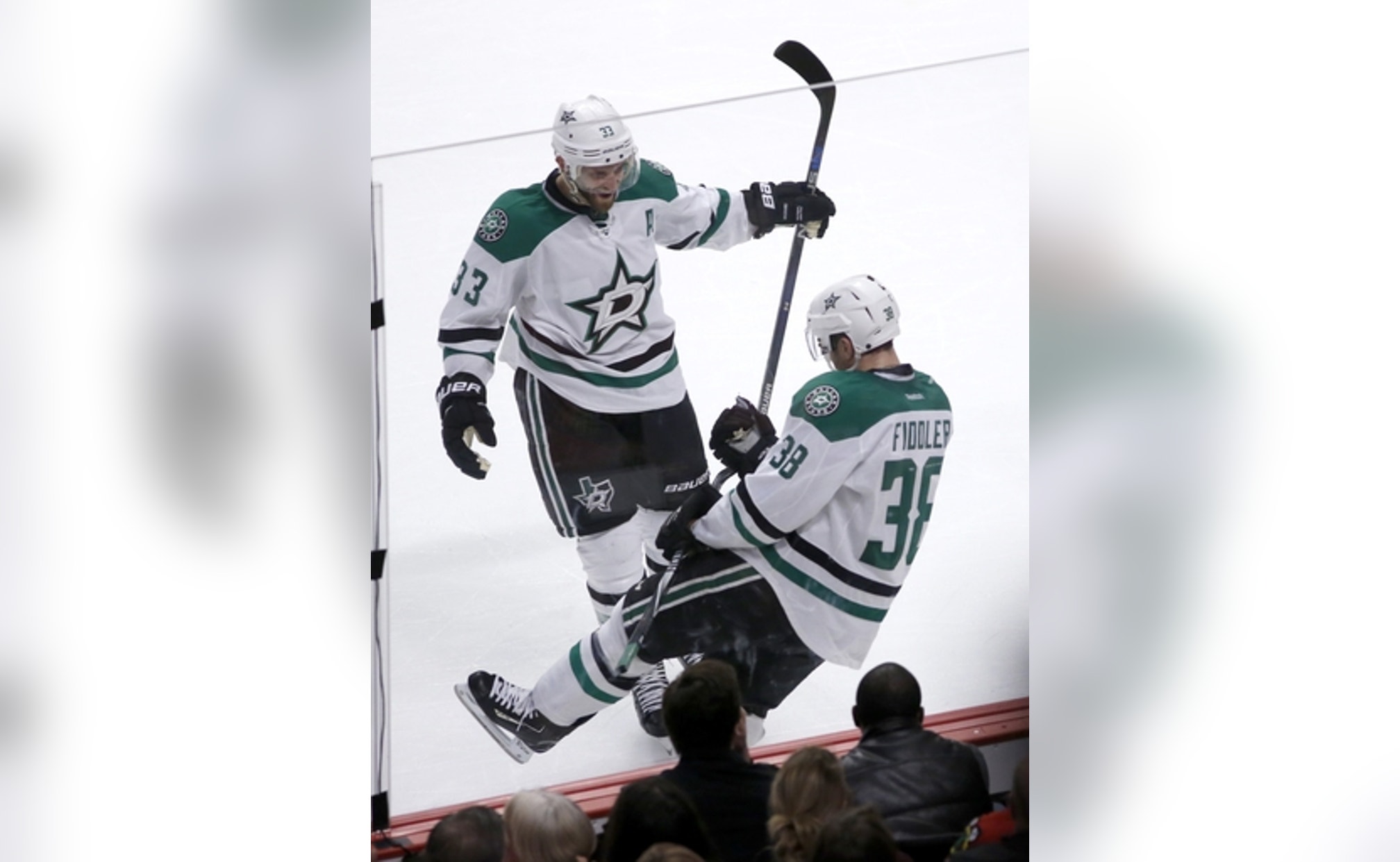 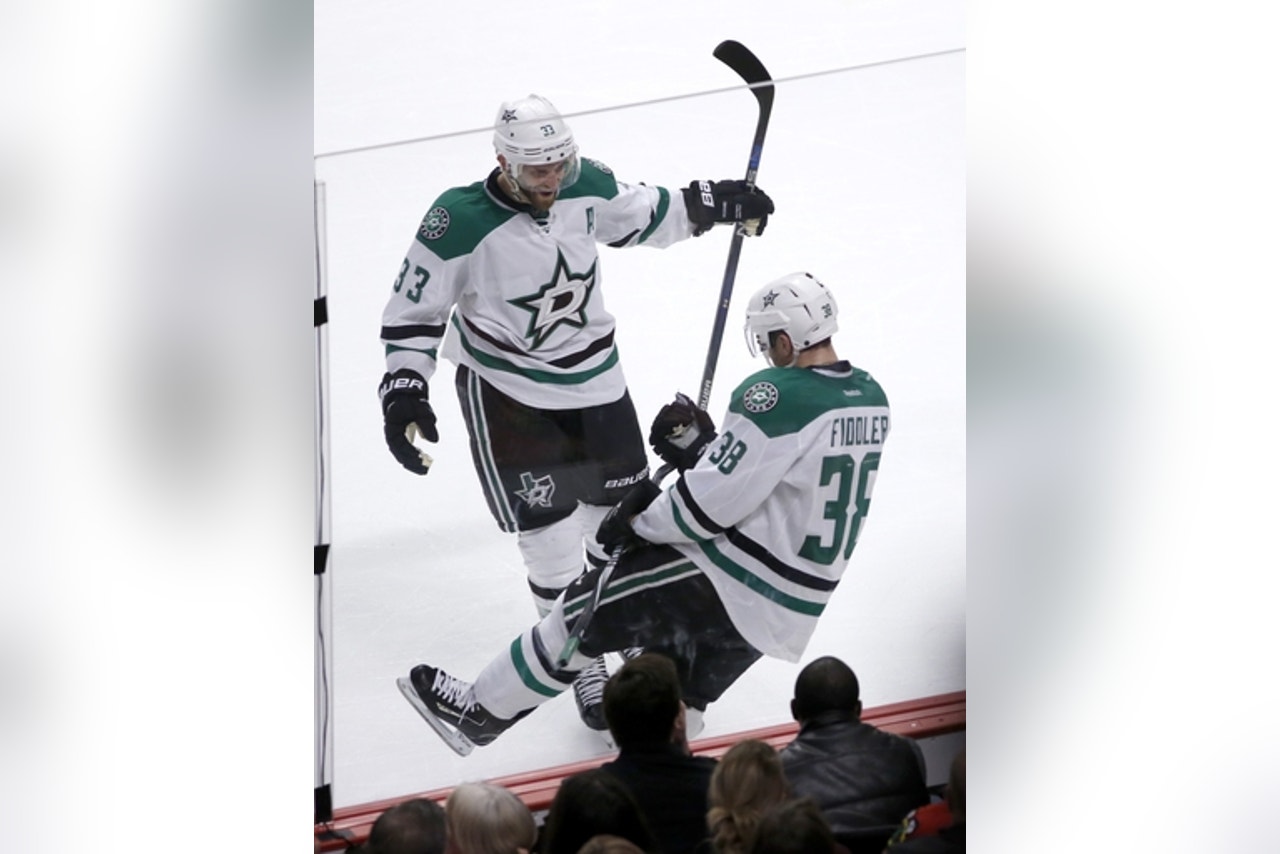 CHICAGO — An opening bank shot, some pretty passing and a stylish breakaway, and it was all over.

The Dallas Stars are heading to the playoffs. The Chicago Blackhawks are searching for their postseason form.

Vernon Fiddler scored two of Dallas' four goals in the first period, and the Stars clinched a playoff spot with a 6-2 victory over the Blackhawks on Tuesday night.

''The last couple of years we've been that team that's been fighting for it right up until the last couple of games, so obviously it's nice to get the `X' beside Dallas,'' Fiddler said. ''We still know we have a lot of work ahead of us and we're prepared to do that.''

Dallas stretched its win streak to three and improved to 4-1 against Chicago, outscoring the Stanley Cup champions 20-11 in the season series. Colton Sceviour and Patrick Eaves also scored in the first, and Jamie Benn had two assists in his 500th NHL game.

The Stars (44-21-9) lead the Western Conference with 97 points with eight games left on their schedule. They also are on track for their first division title since they took the Pacific in 2006.

''We're not going to sit back,'' Sceviour said. ''There's still a lot of stuff that can be accomplished and obviously the division is so tight that if you let up, all of a sudden you're not in the position you wanted to be in. We're in a good spot right now.''

The Blackhawks played without starting goaltender Corey Crawford for the fourth straight game due to an upper-body injury, and Scott Darling was pulled after Dallas' big first period. Michael Leighton made 16 saves in his first NHL appearance since Jan. 27, 2013, for Philadelphia at Tampa Bay.

Crawford is day to day, but coach Joel Quenneville said after the morning skate that he isn't sure Crawford will be able to travel with the team for its four-game road trip beginning Saturday at Calgary. Crawford's absence is one of a whole host of issues for the Blackhawks heading into the final part of the season.

''I don't know if it's confidence or whatever,'' Quenneville said. ''We've got to find a way to rectify the way we play. We've got to play with more urgency. It's hard to measure confidence to me. If you play hard, you find your way through it.''

Chicago (42-25-7) has dropped six of seven to fall off the pace in the tough Central Division, including a pair of losses against the Stars and one against the Kings where it wasn't even competitive - a bad sign even for the playoff-tested Blackhawks.

Andrew Shaw and Richard Panik scored for the second straight game for Chicago, but its biggest stars failed to generate many quality chances.

''At the end of the day, we just have to have that unshakable confidence that good teams go through moments like this when it doesn't matter what you do,'' captain Jonathan Toews said. ''Things don't go your way. We'll have to work through it. That's the only way we're going to get better.''

Dallas grabbed control with two goals in a 25-second span of the first. Sceviour stuffed one home from behind the net that went off Darling's stick at 11:34, and then found Fiddler all alone in front for his 11th goal of the season.

It just got worse from there for Chicago.

With Toews in the penalty box for high-sticking, Eaves finished off a nice passing sequence with a one-timer for a 3-0 lead at 16:01. Four of Eaves' nine goals this season have come against the Blackhawks.

Fiddler tacked on a short-handed goal with 1:17 left, finishing a breakaway with a nice backhand shot that led to a hearty round of boos from the crowd of 22,034. Fiddler had been held off the scoresheet in his previous seven games.

The four goals allowed in the first matched a season high for any period for the Blackhawks, also accomplished by Dallas in the first period of its 4-2 win at Chicago on Feb. 11. Goals by Radek Faksa at the end of the second and an empty-netter for Cody Eakin with 6:12 remaining finished the scoring, matching a season-best for the Stars and a season-worst for the Blackhawks.

''Clinching is really important, but now it's moving on and making sure our game's in the right place,'' Dallas coach Lindy Ruff said, ''and we've been playing some good hockey lately.''