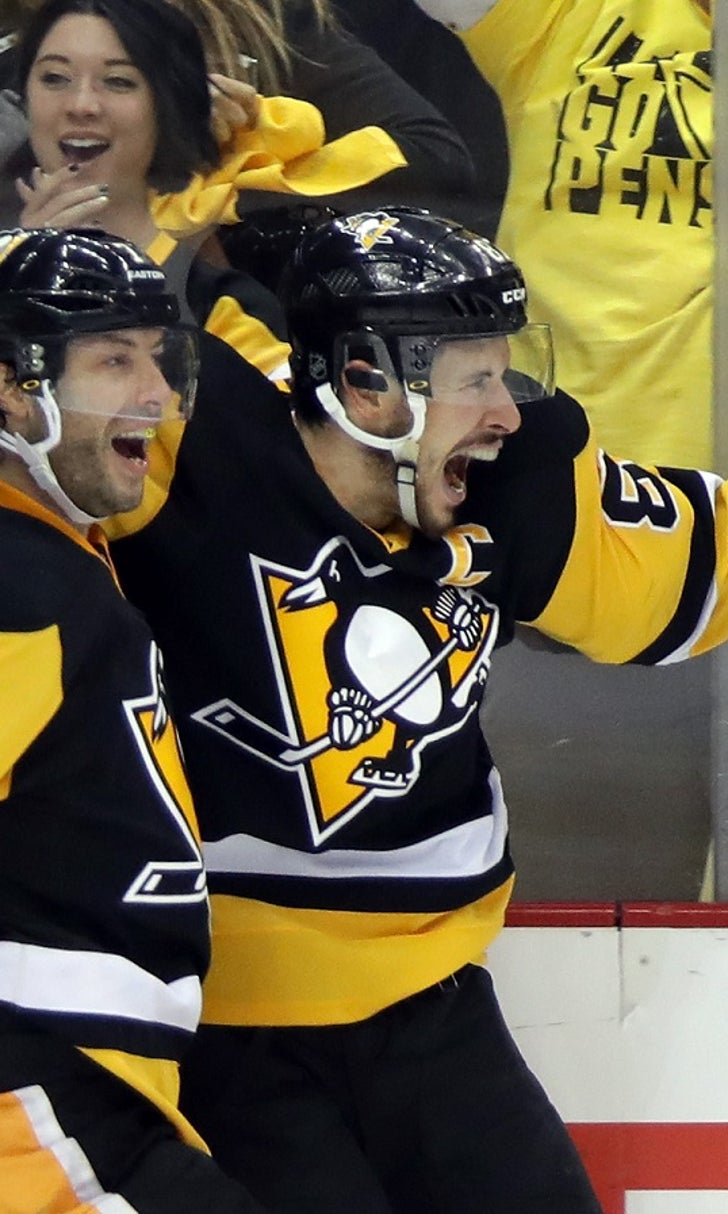 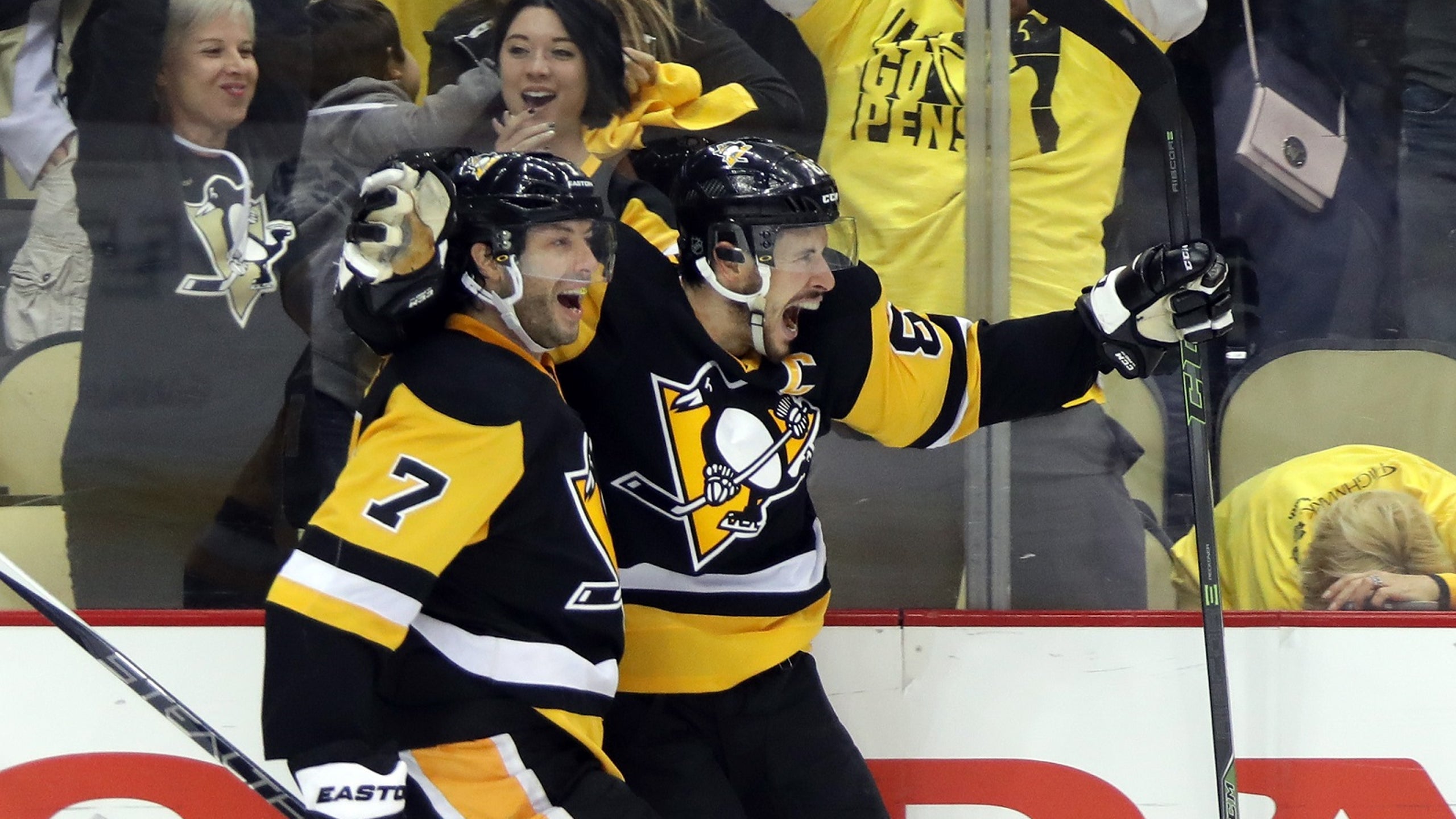 previous story
Tigers blow 8-0 lead, but get late homers to beat Twins 10-8
next story
Ben Simmons waiting on sneaker deal to see if he gets drafted by Lakers 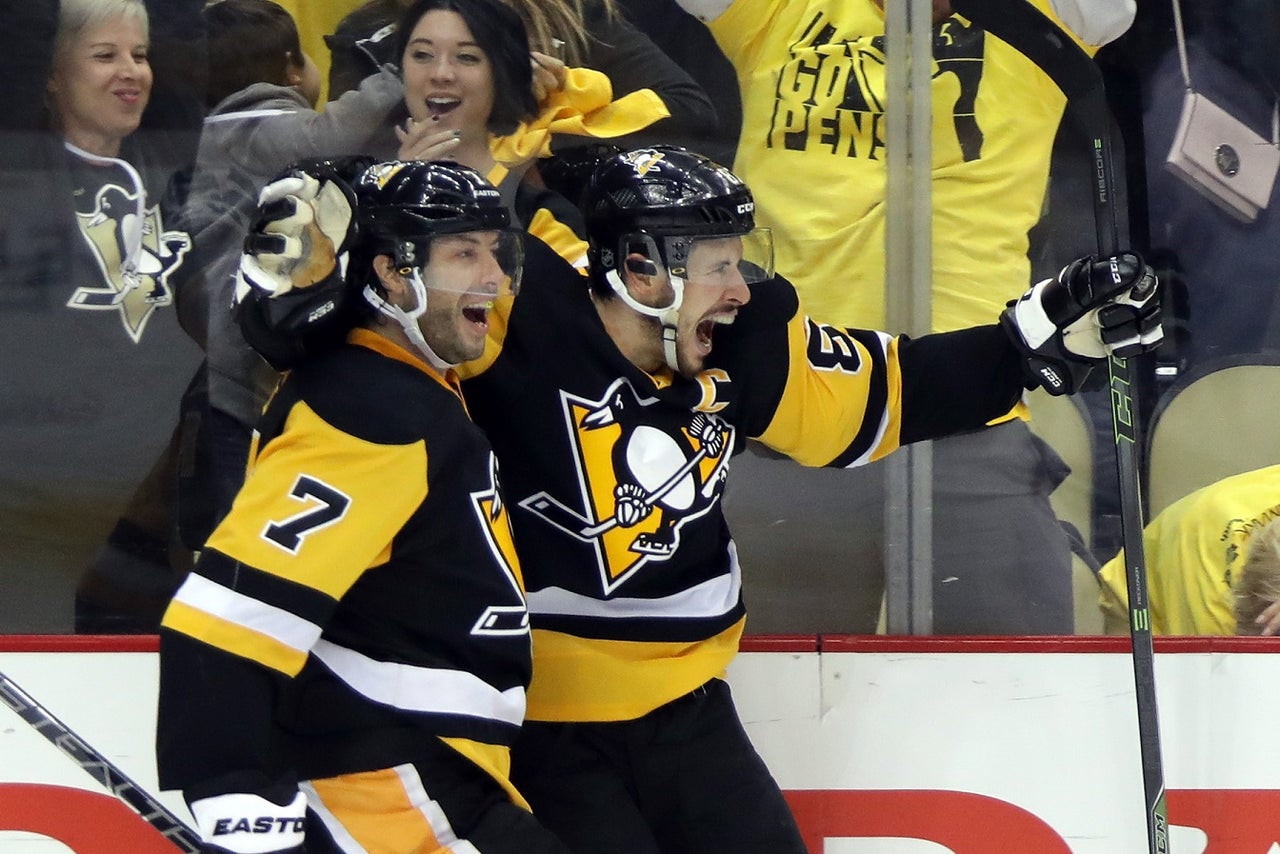 PITTSBURGH -- Sidney Crosby wasn't sure Bryan Rust saw him, so the Pittsburgh Penguins captain gave his impromptu linemate a quick yell just to make sure.

"I tried to let him know I was there," Crosby said.

A deft drop pass from Rust and a flick of Crosby's wrist later, the superstar's lengthy postseason scoring drought was over. So were the chances of the Penguins falling into a deep hole against Tampa Bay in the Eastern Conference finals.

Crosby's shot sailed high and hard over Andrei Vasilevskiy's stick 40 seconds into overtime on Monday night, lifting the Penguins to a 3-2 victory and tying the best-of-seven series at 1. Game 3 is Wednesday night in Tampa.

"It feels good to get rewarded," Crosby said after collecting the first overtime playoff winner of his NHL career. "I feel we deserved it tonight."

Crosby hadn't found the back of the net since Game 4 of the opening round against the New York Rangers, though Tampa Bay coach Jon Cooper downplayed the idea that the two-time MVP was in a slump, pointing out a cold streak for Crosby is a hot streak for most others.

Yet most others aren't Crosby. In danger of heading south down 2-0, Crosby generated scoring chance after scoring chance, including a backhand in the second period that appeared destined for an open net before Vasilevskiy stretched his glove out to make a save that could have tilted the balance of power in the series.

Instead, it only seemed to lift the Penguins to another level. Pittsburgh dominated most of the night, outshooting Tampa Bay 41-21 while spending most of the game in the Lightning zone. Only the brilliant play of the 21-year-old Vasilevskiy -- filling in for injured starter Ben Bishop -- kept Tampa Bay in it.

"He was outstanding," Cooper said. "You never want to lose your No. 1 guy in (Bishop) but .... Vasi was probably the reason why the game went to overtime in the first place."

Vasilevskiy finished with 38 stops, but darted toward the dressing room after he moved too far to his left when squaring to face Crosby, giving Crosby all the room he needed to score perhaps the second-most important goal of his life after his overtime winner for Team Canada in the gold medal game of the 2010 Olympics.

That goal proved cathartic for his home country. This one could do the same for Crosby's adopted city, one in desperate need of a Stanley Cup to bookend the one Crosby helped claim in 2009.

The Penguins still haven't lost consecutive games of any variety since January and none with the usual allotment of men on the ice since coach Mike Sullivan's first week on the job back in December.

"We just stayed with it," Sullivan said. "We tried to play the game the right way. That's what I like the most about the group. As the game wore on we got better and better."

Matt Cullen and Phil Kessel scored during Pittsburgh's two-goal burst to start the game and Matt Murray rebounded from a shaky start to finish with 19 saves, including stuffing Alex Killorn on a breakaway late in the second period of a tie game.

"It was a huge save, there's no doubt," Sullivan said. "Matt's history has been he's always responded pretty solid when he thinks he could have had one or would have liked one back."

Anton Stralman scored in his return to the lineup from a fractured left leg and Jonathan Drouin picked up his second goal of the series, but the Lightning lost for just the third time in 12 postseason games.

"It's hard for us to swallow," Drouin said. "You could have a 2-0 lead going to your building but we've got to go home and make sure we're ready."

The Penguins pointed to an inability to generate quality chances from in close as a major problem in Game 1. In danger of falling behind by two games for the first time in the postseason, Pittsburgh wasted little time trying to make Vasilevskiy uncomfortable, scoring a pair of early goals on scrambles from in front to go up 2-0 less than 10 minutes in.

Then just as suddenly, Pittsburgh's momentum vanished. Stralman collected a pretty cross-ice feed from Jonathan Marchessault and lifted the puck over Murray's outstretched glove to cut the lead in half with 3:23 to go and Drouin's knuckler from the right circle tied it with 70 seconds remaining.

Yet the Penguins stuck with it, peppering Vasilevskiy relentlessly in the third period and remaining upbeat even as the 21-year-old goaltender pushed the game to overtime. Once there, Crosby's 47th playoff goal provided a boost Pittsburgh hopes it can carry south.

NOTES: The Lightning were 0 for 1 on the power play. Pittsburgh was 0 for 2. ... The Penguins scratched struggling defenseman Olli Maatta and replaced him with Justin Schultz. ... Tampa Bay captain Steven Stamkos skated in a regular jersey with his teammates on Monday morning but remains out while dealing with a blood clot. ... Tampa Bay forward Ryan Callahan sat out while battling the flu.