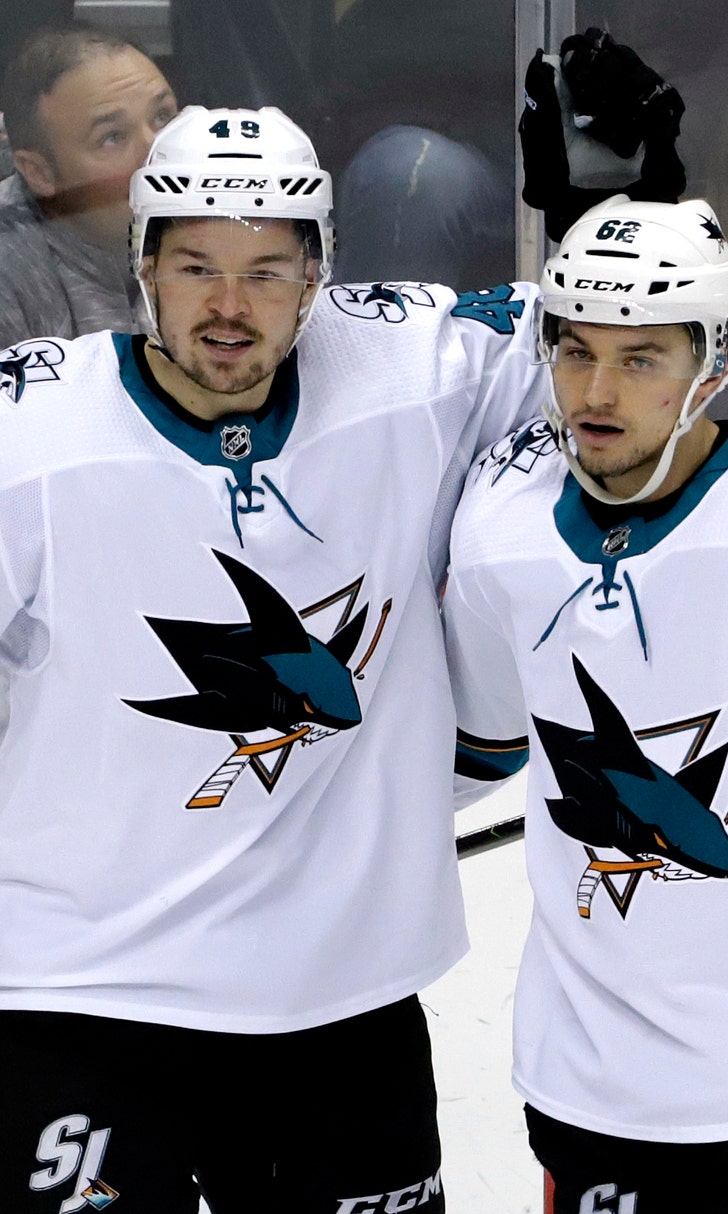 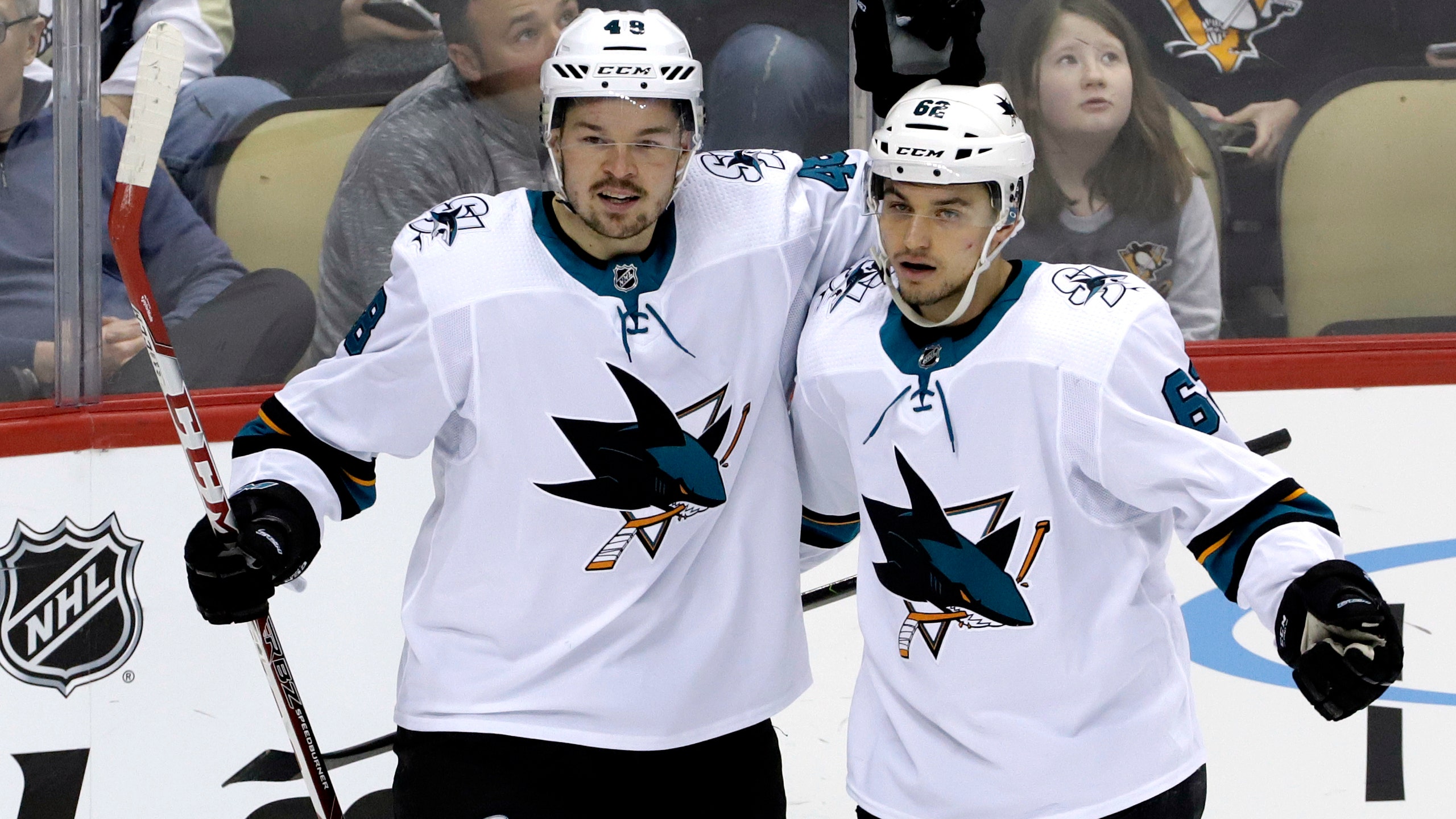 PITTSBURGH (AP) — Evander Kane couldn't help himself. Skating near the Pittsburgh Penguins bench late in the third period Thursday, the San Jose Sharks forward took a peek at Pittsburgh's whiteboard, which may — or may not — have written down the time it planned on pulling goaltender Casey DeSmith in an effort to get back into the game.

"I like to think a little bit of a savvy veteran thing to do, right?" Kane said. "If you can see it, why wouldn't you look at it?"

Even if it was hardly necessary. Not with the Sharks well on their way to a dominant 4-0 victory behind two goals from Tomas Hertl and a short-handed marker by Kane in the first 14 minutes.

The Penguins, out of a mixture of frustration at their own sloppy play and Kane's gamesmanship, took exception, and it bubbled over into a late on-ice dust-up that ended with the odd sight of Pittsburgh captain Sidney Crosby mixing it up with San Jose's Micheal Haley, someone far more known for his work with his fists than his stick.

While Kane tussled with Tanner Pearson, Crosby traded punches with Sharks defenseman Brenden Dillon before Haley — who has nine career goals and 592 penalty minutes — jumped in. The two were separated relatively quickly, and Haley downplayed the notion he was actually brawling with the three-time MVP.

"I don't know if I'd call that a fight," Haley said. "If all the fights were like that, I'd take it. My body would feel a lot better. No, actually. It's pretty hard for me to get a hold of guys like him. But things happen in a hockey game, and I'm glad we came out on top."

The scrum ended with Crosby, Haley, Dillon, Pittsburgh defenseman Marcus Pettersson all earning 10-minute misconducts, and Penguins coach Mike Sullivan getting ejected. Sullivan declined to get into why he was tossed. He was only a bit more expansive on his team's first-period pratfall that allowed San Jose to take a commanding.

"We take a penalty a minute into the game and it snowballed from there," Sullivan said. "We gave them three fairly easy goals. It's hard to overcome that."

Martin Jones stopped all 26 shots he faced to earn his 21st career shutout. Brent Burns picked up his 12th of the season late for the Sharks, who have won eight of 10 overall to pull within one point of Calgary for the top spot in the Pacific Division.

DeSmith finished with 29 saves, but Pittsburgh stumbled out of the gate and never recovered to lose for just the second time in six games.

"We made a few mistakes early and they happen to be big ones," Crosby said.

Hertl scored a hat trick in San Jose's 5-2 victory over the Penguins on Jan. 15 and wasted little time going to work in the rematch. Pittsburgh defenseman Jack Johnson took a penalty for hooking less than a minute into the game, and Hertl put the Sharks in front when he pounced on a rebound and lifted it over a sprawled DeSmith 1:44 into the first.

Kane doubled San Jose's advantage 10:01 into the first when Pittsburgh's power play — which has careened between dynamic and dreadful all season — endured another breakdown that ended up with the puck in the back of its own net.

Burns tipped the puck away from Phil Kessel at the blue line, and Kane chased it down before flipping a backhand between DeSmith's legs. Kane's 27th goal of the season was also the 13th short-handed marker allowed by Pittsburgh, the most in the NHL.

Hertl's 28th goal of the season — the one that pushed San Jose's advantage to 3-0 just 13:19 into the game — might also have been his easiest. Logan Couture fought off two Penguins to keep the puck in at the blue line, and Hertl retrieved it before passing it to Joe Pavelski in front. Pavelski slipped it cross-ice to Kevin Labanc. Labanc held it for a second — just long enough for DeSmith and Pittsburgh center Matt Cullen to collide — before passing it back to Hertl, who was just outside the blue paint when he put it into the empty net.

Cullen and DeSmith shook their heads in disbelief while Johnson — who has come under fire recently — angrily fetched the puck out of the net.

NOTES: Cullen played in his 1,495th game, tying him with Hall of Fame defenseman and current Buffalo Sabres coach Phil Housley by the third most all-time by an American-born player. ... Several Penguins wore rainbow tape on their sticks during pregame warmups as of "Hockey Is for Everyone" night. The sticks will be auctioned off to raise money for "You Can Play," an advocacy group that promotes safety and inclusion for all who participate in sports, including LGBTQ athletes, coaches and fans.

Sharks: Continue a four-game trip in Columbus on Saturday. The Blue Jackets won the first meeting between the two teams 4-1 on Nov. 1.