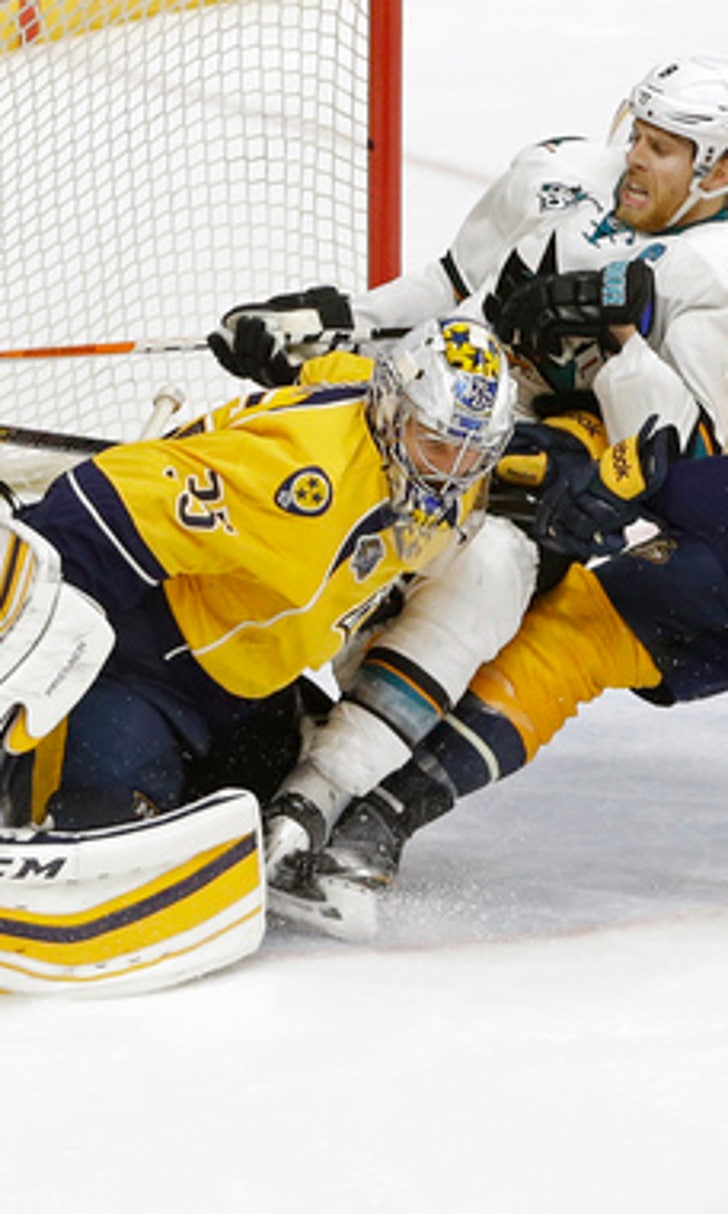 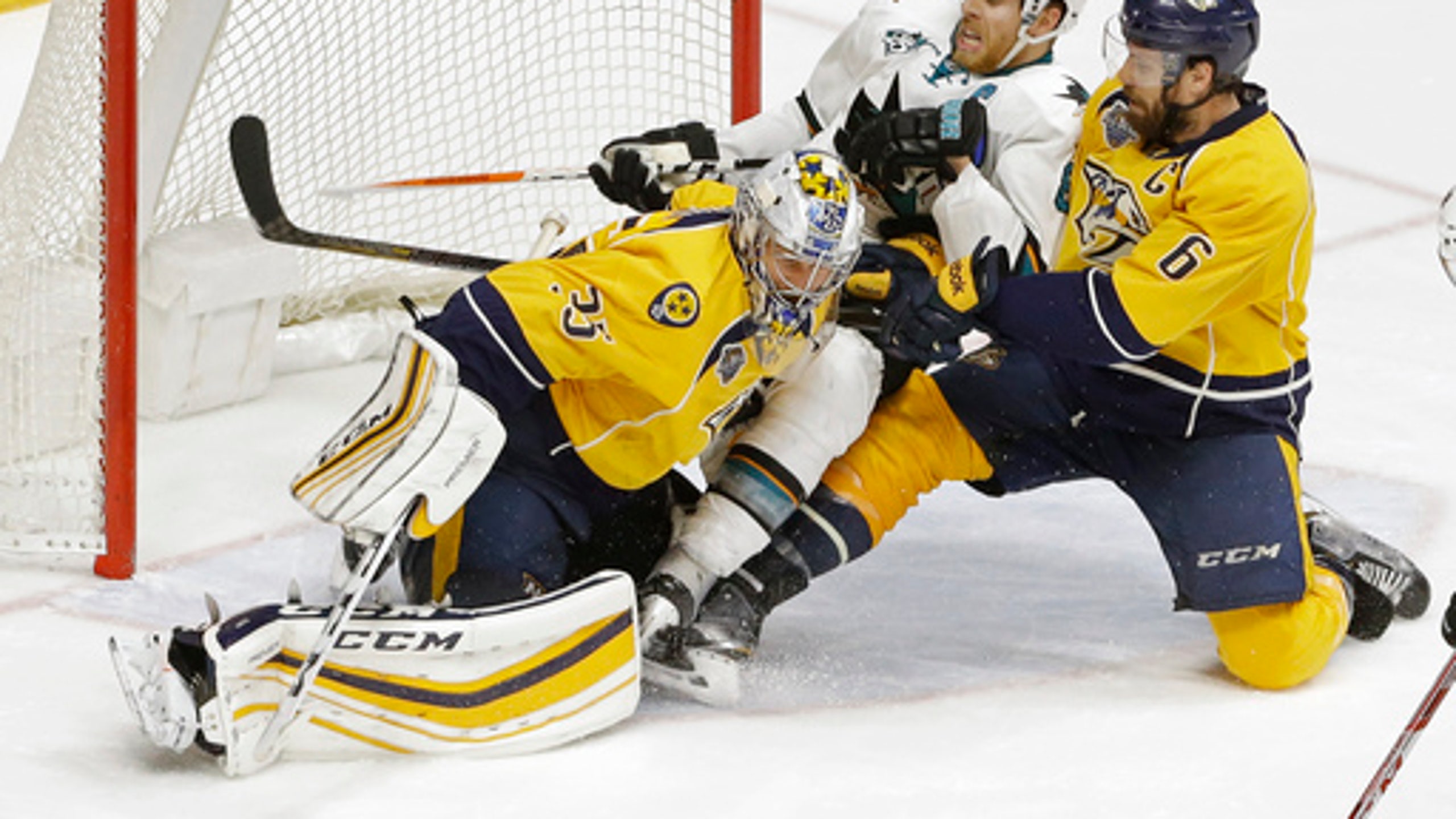 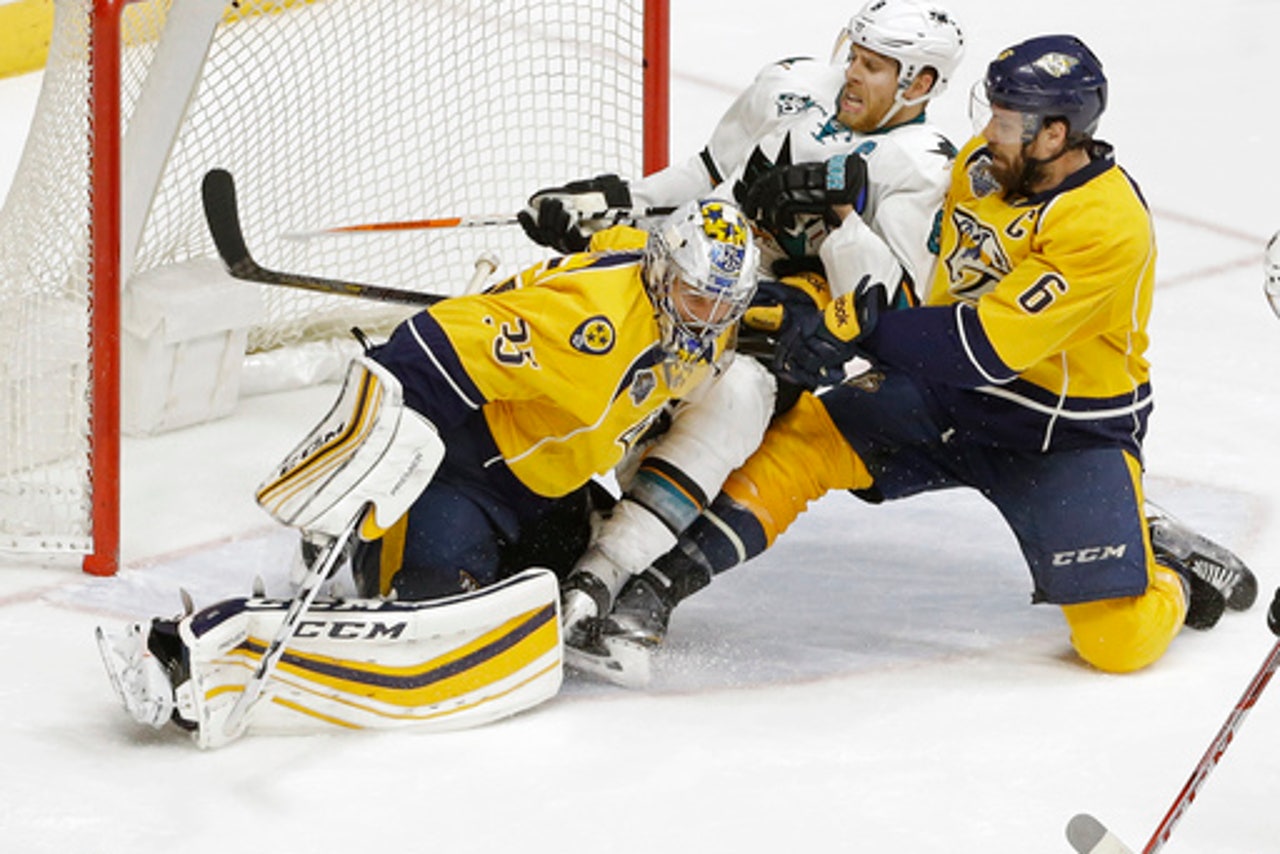 NASHVILLE, Tenn. (AP) The only good thing about taking a puck to the head from the man with the NHL's hardest shot is just how fast it happens.

Sharks defenseman Marc-Edouard Vlasic found himself between Predators defenseman Shea Weber and the net in Game 2 of San Jose's second-round series with Nashville. Weber won the NHL's hardest shot in January with a blast of 108.1 mph, and the captain's slap shot hit Vlasic in the face in a very scary moment.

The shot dented Vlasic's visor and glanced off his cheek as the defenseman had no chance to react.

Blocking shots requires no artistry, simply the willingness and desperation to sacrifice the body by standing, diving onto the ice or sliding across the slot to stop a blistering shot. Helping the goaltender by throwing a body in front of a shot becomes even more crucial in the NHL playoffs, where the puck that slips past could wind up sending a team home for the season.

''It's another level of commitment in the playoffs, so you get a (higher) level of shot-blocking,'' Washington coach Barry Trotz said. ''You play a team possibly seven games, you know their tendencies so you can get in some of those lanes. You study that probably a lot harder when you're playing a different opponent every night.''

Nashville has a postseason-high 217 blocked shots with 11 games, including a triple-overtime win over the Sharks. San Jose is second with 208 in two fewer games. Pittsburgh is third with 172 followed by St. Louis (168) and the New York Islanders (162) with Dallas and Washington tied with 154.

Weber said he believes in playing the same way no matter the time of the season.

''You should always block shots,'' said Weber, who ranked second with 160 blocks on the Nashville roster behind teammate Roman Josi (185). ''In any case, it might bring out the best in some guys. It's every shot could mean a game, could mean a series. I think guys realize how much it matters and definitely put their bodies on the line.''

Colorado led the NHL with 745 blocked shots during the regular season led by defenseman Francois Beauchemin, who had a league-high 256. It's a task that leaves a mark no matter how much padding protects players today from shins to shoulders with helmets and visors guarding the head.

''It just seems some way the pucks will find a hole where you have no padding,'' Beauchemin said recently. ''Those kind of hurt for a couple of days. After a win, it's all good.''

Skates also have blockers to protect the feet - to a point.

''I think the key thing is not turning your foot, like exposing the side of it,'' Capitals forward Daniel Winnik said.

''That's just a mental part of it just to sacrifice your body to get in front of that puck to pay that price,'' Nashville defenseman Mattias Ekholm said. ''I don't know if you want to practice that too much. It's going to hurt. In the playoffs, you do whatever it takes to get in front of the puck.''

Blocking a shot doesn't simply mean throwing a body in front of the puck willy-nilly and risking it deflecting into the net for an own goal. Many goaltenders like to see the puck clearly, giving them a better chance to control the rebound or smother with the glove. Blocking a shot too close to the goalie takes away crucial time for him to make a play.

With teams crashing to the front of the net, communication among teammates and the goalie is crucial.

''I just ask they don't cross in front,'' Washington goalie Braden Holtby said. ''Straight-on screens are pretty easy for us. It's the crossing and that type of thing not only on shots but passes and everything like that. Our guys are really smart about that.''

Nashville defenseman Barret Jackman has been blocking shots for years.