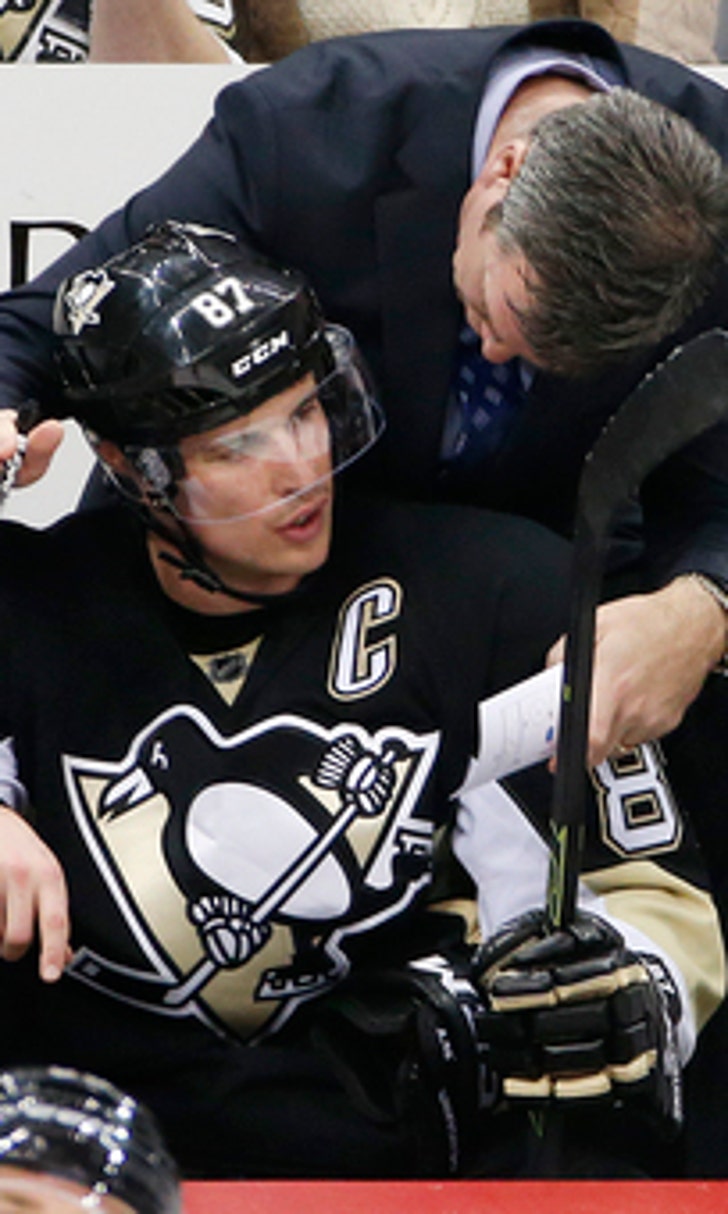 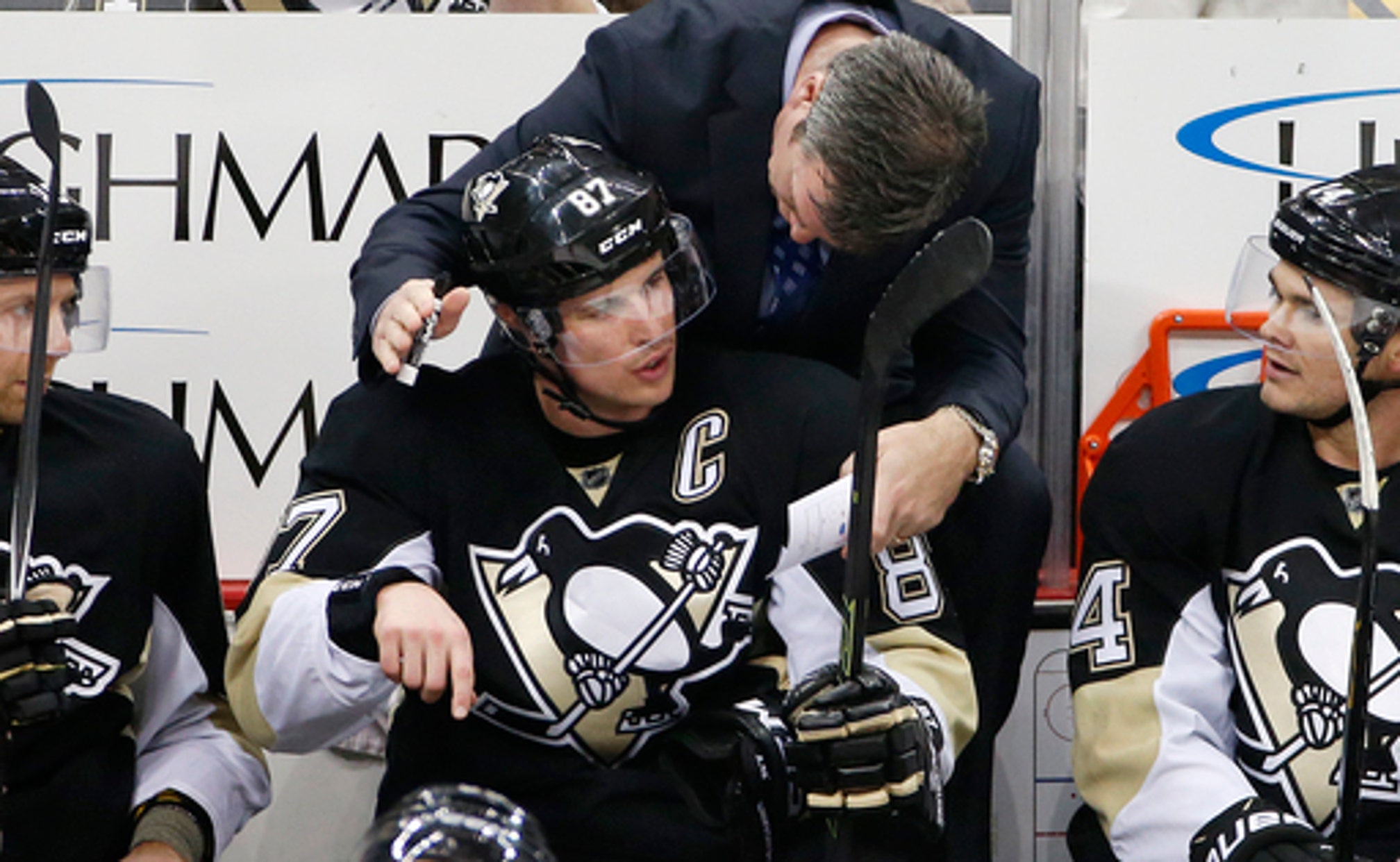 Pens' Crosby out with concussion; no timetable for return 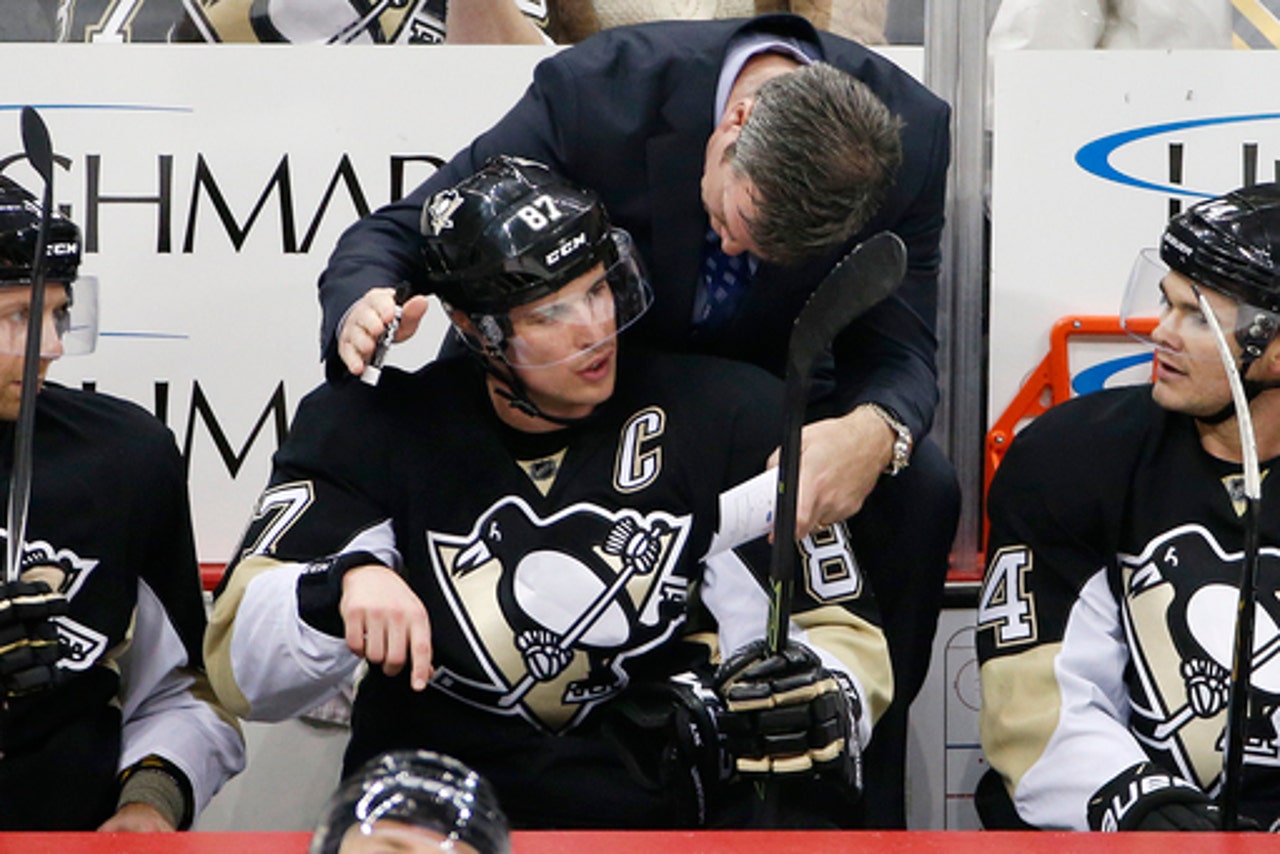 Sidney Crosby collided with a Pittsburgh Penguins teammate last Friday at practice and thought nothing of it. Just one of those things.

When the two-time MVP woke up Saturday, though, the headache he experienced felt familiar and he was hardly surprised by the concussion diagnosis that will keep the Penguins captain out indefinitely.

It's well-worn territory to be sure for a player who missed the better parts of two seasons following a blindside hit to the head in January 2011.

That doesn't mean, however, that what Crosby's dealing with now will linger as long - or as frustratingly - as those interminable two years when he wondered when he'd get right.

If anything, what he endured then will only help him going forward.

''I think going through it, you understand the process and I think that progress is a good thing,'' he said.

Crosby felt good enough on Tuesday to spend close to an hour on the ice skating alongside injured teammates Bryan Rust and Matt Murray, but he declined to set any sort of timeline on when he may return.

Call it the residue from the aftermath of the hit by Washington's David Steckel during the 2011 Winter Classic that forced Crosby to hit pause on his spectacular career.

Both Crosby and the team declined to get into specifics about what exactly happened, though he insisted the injury is a result of getting ''tangled'' with a teammate at practice and not something that occurred during the recently completed World Cup of Hockey. Crosby was the tournament's MVP after leading Canada to gold.

Crosby will remain in the concussion protocol for now, a series of procedures he knows well, ones that continue to evolve as more research comes to light.

''We've learned so much in a short period of time,'' Crosby said. ''I think there's a really good structure in place on how to get back and that kind of thing. I feel confident and comfortable with everything.''

The Penguins open the season Thursday night at home against Washington and during a pregame ceremony will raise the banner for the franchise's fourth Stanley Cup title. Crosby almost certainly will be out of the lineup, but he harbors no concerns about how this latest head injury will affect him in the long term.

''(Concussions) happen,'' he said. ''They happen in a lot of different sports and guys have multiple concussions and they're fine. Just have to treat them the right way and make sure they handle it right and you're honest. Like I said, I'm comfortable and confident that things will be OK.''

The timing is eerie when it comes to the level of Crosby's play. He was leading the NHL in scoring and in the middle of perhaps the best hockey of his career in 2011. This time, he's coming off a stretch in which he captured the Conn Smythe Trophy as the playoff MVP while leading the Penguins to a title and backed it up with a sublime performance in the World Cup.

''You want the top players in the game,'' said Washington Capitals defenseman Matt Niskanen, a former teammate in Pittsburgh. ''That's best for everybody. When everyone's best players are in the game, that's what everyone wants to see. But most importantly for the individual, you just hope that it's nothing serious.''

The Penguins have been able to survive without Crosby in the lineup, at least during the regular season. Evgeni Malkin won the Hart Trophy (MVP) and the Art Ross Trophy (leading scorer) after the 2011-12 season, a year in which Crosby was limited to 22 games as he continued to battle concussion-like symptoms.

And a core that is only too aware of the toll concussions can take. Defenseman Kris Letang has dealt with multiple concussions during his career, and goaltender Marc-Andre Fleury suffered one late in the regular season that kept him out so long that he found his job eventually taken by rookie Matt Murray, who helped guide the Penguins to the Cup.

As encouraging as it was to see Crosby in the dressing room on Tuesday, the Penguins are taking nothing for granted.

''It makes your mind think maybe he's close, but these types of things are on their own timeline and no one compares to somebody else,'' forward Chris Kunitz said. ''The good thing is he understands what he's going through, and he'll be the best one to be able to come back from it.''

NOTES: The Penguins claimed goaltender Mike Condon off waivers on Tuesday and assigned Tristan Jarry to their AHL affiliate. Condon will back up Fleury while Murray recovers from a broken hand.