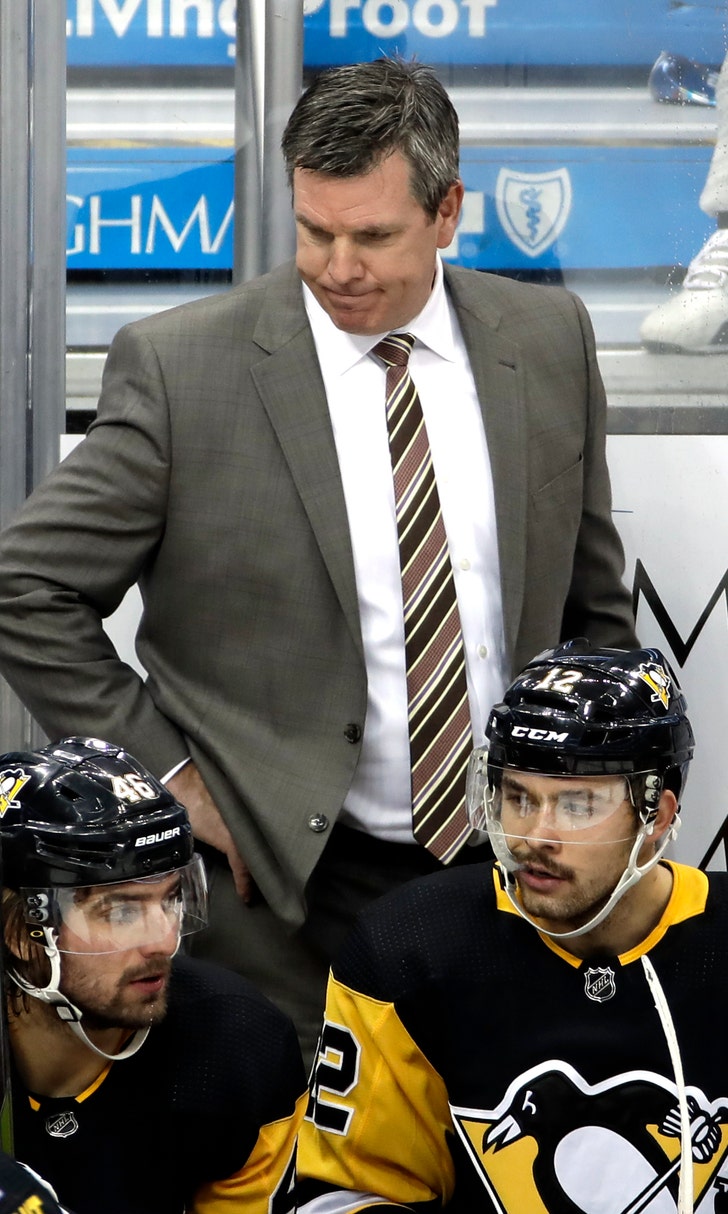 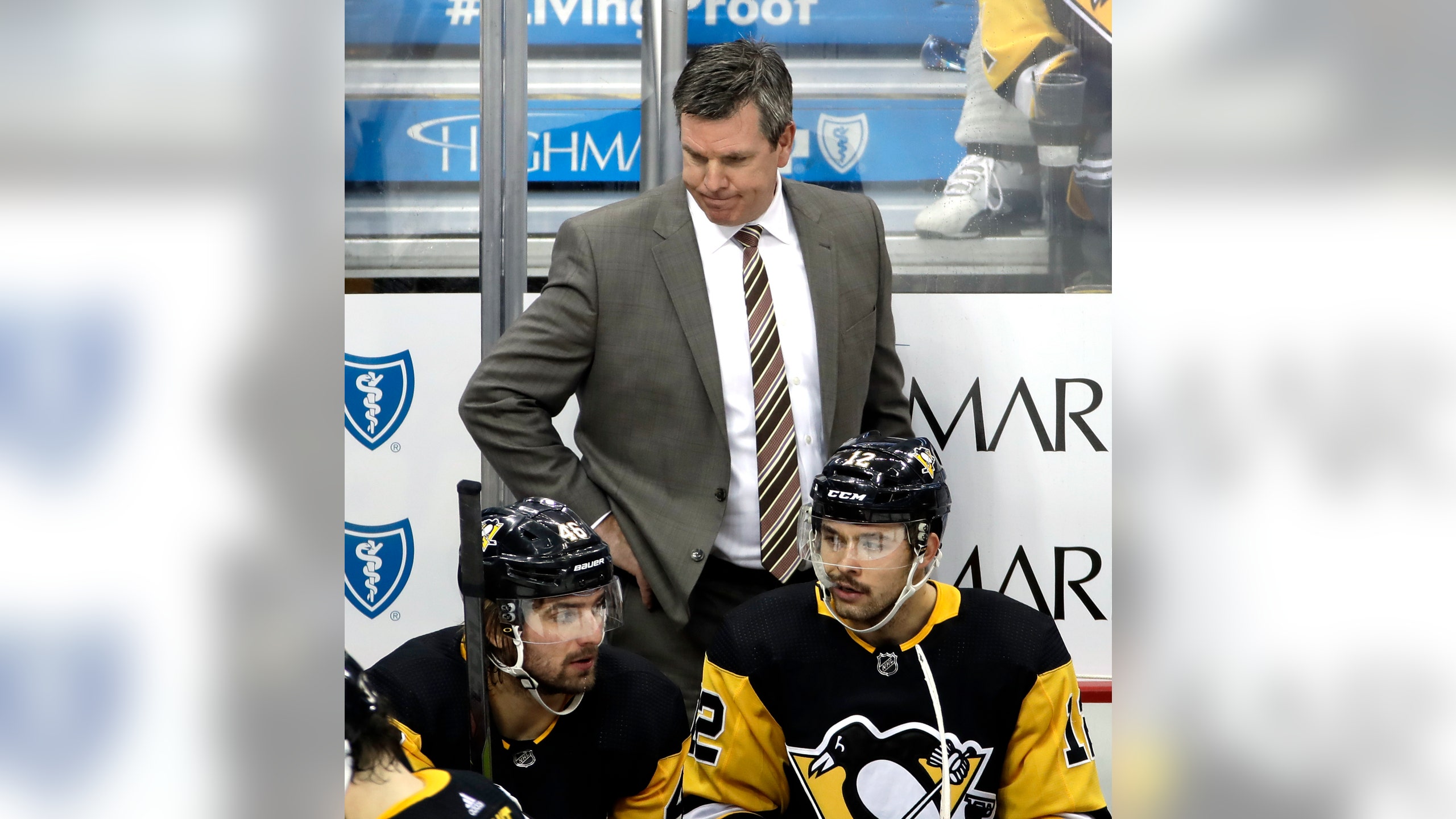 Penguins trying to stay the course during bumpy start

PITTSBURGH (AP) — Mike Sullivan's regular film sessions with the Pittsburgh Penguins don't lack for clues on why one of the NHL's marquee franchises is in the midst of its bumpiest stretch in more than a decade.

The defense can morph into a disjointed mess under sustained pressure, particularly right in front of the net. The crisp breakouts that used to trigger odd-man rushes featuring some of the league's most skilled players moving at warp speed have largely vanished and been replaced by something significantly sloppier.

Oh, and the NHL at large has caught up to the frenetic tempo Sullivan introduced when he took over nearly three years ago, a hiring that — combined with a roster makeover authored by general manager Jim Rutherford — helped power the Penguins to consecutive Stanley Cups. In that way, Pittsburgh's current struggles are a byproduct of its not-so-distant glory.

"For the most part it's a copycat league and teams tend to try to emulate the teams that have success," Sullivan said Tuesday. "When you look at our team over the last handful of seasons, we've had pretty good success with a certain style of play."

A style Sullivan has no plans to abandon even with Pittsburgh mired in a 1-7-2 funk that has dropped his club into a tie for the fewest points in the wide-open Eastern Conference a quarter of the way through the season.

"You look at the core of our players, (Sidney) Crosby, (Evgeni) Malkin, (Phil) Kessel, (Kris) Letang, all those guys can skate," Sullivan said. "They can still skate."

The thing now is, so can everyone else.

The proof came to life over the last 30 minutes against Buffalo on Monday night, when the Sabres reeled off the final four goals, including Jake Eichel's game-winner 45 seconds into overtime at the end of a sequence that began with a Malkin giveaway in the offensive zone.

It was the kind of miscue Pittsburgh used to pounce on with ruthless efficiency. Now it's the Penguins who are making the crucial mistakes, ones that are ending up in the back of their own net with alarming regularity.

"I think we've been doing some really good things the last handful of games but we've been shooting ourselves in the foot a little bit with a few plays," forward Bryan Rust said. "We've got to be a little bit more mindful of that and just dig down a little bit deeper and the bounces will eventually go our way."

There is a fair amount of "puck luck" that's abandoned Pittsburgh at the moment. The Penguins were up two goals late in the second period against Buffalo when Pittsburgh defenseman Jack Johnson locked up Sabres forward Conor Sheary in front of the net. No matter. Casey Nelson's shot from the point deflected off Johnson's skate and by goaltender Casey DeSmith.

Watching from afar while sitting out a third straight game nursing an upper body injury, Crosby could only scratch his head.

"I think the thing for us that's probably been a little more difficult is, it's not necessarily the same thing," said the two-time MVP, who hopes to play on Wednesday when Pittsburgh hosts Dallas. "We've found different ways to lose games and you know, we've probably corrected one thing and something else has been a factor in another game we lost."

One thread, however, has been a constant: defense. The Penguins — particularly early in the season during the Crosby era — have occasionally been slow to tighten things up because they are so talented offensively that the finer points of playing responsibly in their own end can be lost.

In past years, Pittsburgh has been able to outscore opponents even on nights it didn't particularly play well. That's not happening at the moment. The loss to Buffalo marked the eighth time in 19 games the Penguins have allowed at least five goals, something they did 13 times all of last season.

While Sullivan is quick to point to the number of quality chances Pittsburgh created against Buffalo, he's well aware his team was far too generous in front of DeSmith. Pittsburgh dominated the first period but only had a 1-1 tie to show for it after forward Dominik Simon lost his footing while attempting to help clear a puck. Buffalo kept it in the zone and a cross-ice pass led to a one-timer that Tage Thompson buried to even the game.

"We've got to do a better job defending and making sure we stay on the right side of the puck and the right side of people in the critical areas of the rink," Sullivan said. "That's an area we can all improve as a team."

Pittsburgh hasn't missed the playoffs since Crosby's rookie year in 2005-06 and Crosby stressed it is far too early to panic.

"It's tight but we just have to make sure we eliminate our mistakes and give ourselves the best chance and I thought for the most part (against Buffalo) we were pretty in control of that game," Crosby said. "I think if we keep trending that way, we'll learn from that one and get a lot more wins."

Three quarters of the season remains. Though the Penguins have been "meh" at best, the rest Metropolitan Division hasn't exactly been lights out. Only eight points separate the Penguins from first-place Columbus. One good consistent stretch of hockey and things can change very quickly.

"You can't control the ones you've let slip away," Crosby said. "Ten games from now, you don't know where you're going to be."