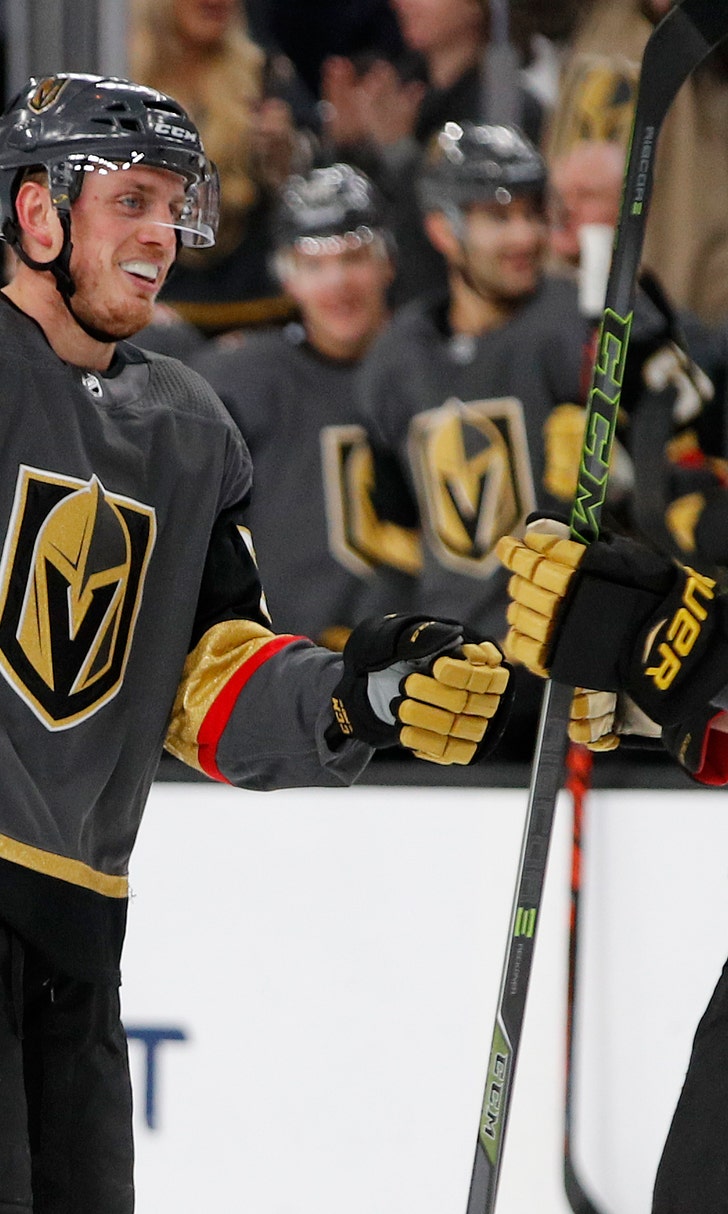 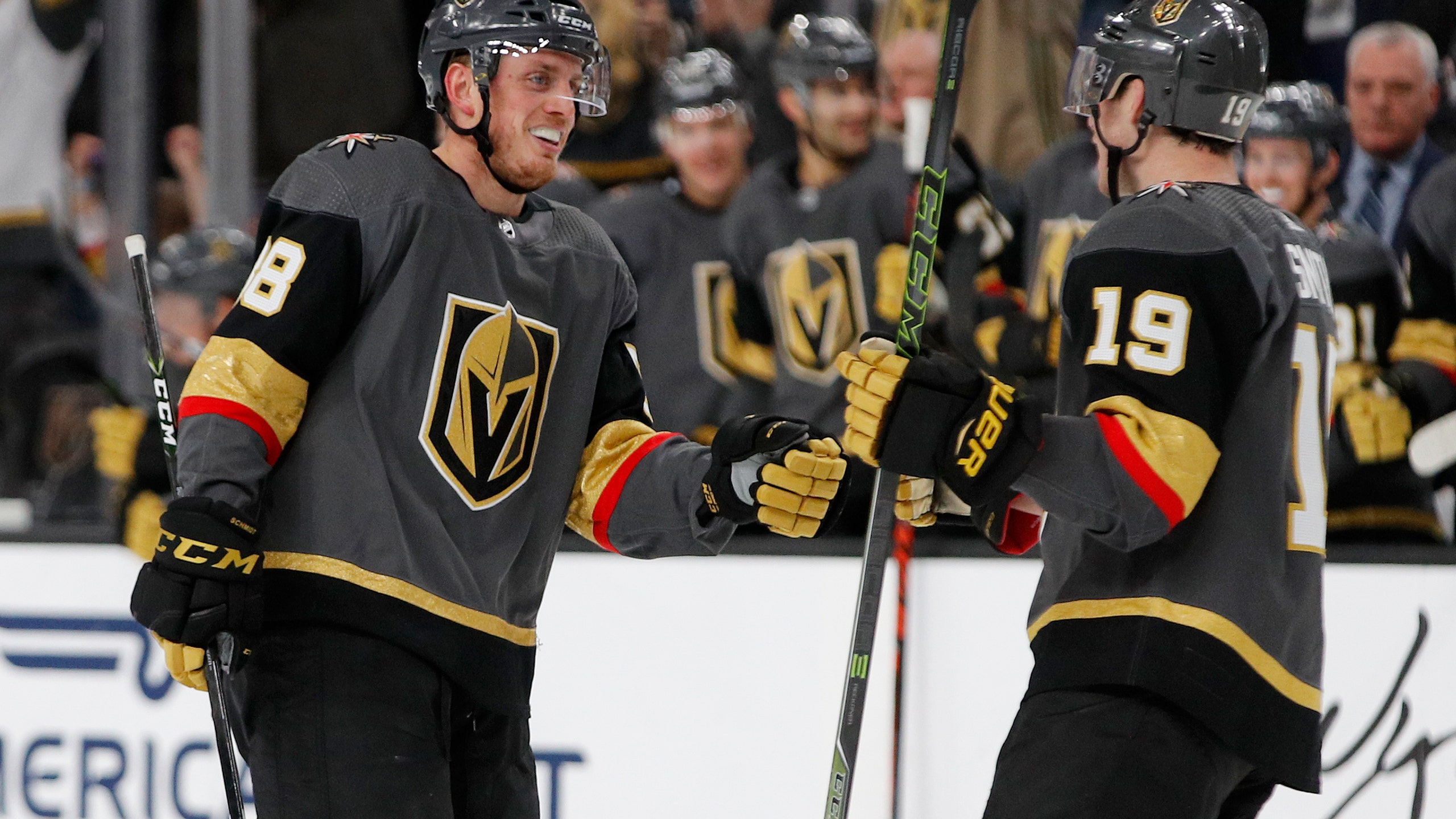 LAS VEGAS (AP) — After clashing for years in the Atlantic Division, new Vegas teammates Max Pacioretty and Mark Stone suddenly found themselves on the same side Tuesday night.

Worked pretty well together, too.

Pacioretty scored two goals, including the tiebreaker with 5:08 remaining, to lift the Golden Knights to a 4-1 win over the Dallas Stars.

With the teams tied 1-all, Pacioretty fired the puck from behind the net and it ricocheted off Dallas forward Tyler Seguin's skate past goaltender Ben Bishop for his fourth game-winner of the season.

"When I scored, (Stone) said, 'I never thought I'd be cheering for one of your goals,'" said Pacioretty, who was acquired from Montreal in September. "Just the nature of the sport. He's a great guy and he's going to be here for a long time and I'm really looking forward to playing with him."

The win was a celebration for Stone, traded from Ottawa with prospect Tobias Lindberg just before Monday's deadline for forward Oscar Lindberg, prospect Erik Brannstrom and a 2020 second-round draft pick that originally belonged to Dallas.

"We had a lot of battles. ... You've got to learn to expect the unexpected in this game," Stone said. "As a professional athlete you never know where you're going to end up next. It's exciting to be able to play with these types of guys."

It was a much-needed victory for Vegas, which had been outscored 45-30 during a 3-9-1 slide. The Golden Knights improved to 2-6-1 in their last nine home games and 4-1-0 all-time against Dallas.

Nate Schmidt and Brayden McNabb added empty-net goals. Marc-Andre Fleury, playing in his 100th game with the Golden Knights, snapped a five-game losing streak by making 23 saves. The 15-year veteran lost eight of his previous 10 starts, allowing 24 goals over his past six games.

"It was very frustrating and challenging cause a lot of those losses were at home and we've had so much success here and we want to be a tough team to play here in front of our fans because they're always so good to us," Fleury said. "You always want to work on little things, try to get better and try to figure it out and tonight it finally feels good to come off with the win."

The physicality from both teams was evident with a combined 86 hits, including several by Vegas enforcer and fan favorite Ryan Reaves.

"The guys have been hungry for winning a hockey game," Golden Knights coach Gerard Gallant said. "It was a good recipe for us tonight. I thought Reavo really set the tone for us; he had some huge hits. Nabber (McNabb) stepped up and had some real big hits. We played a hard game. Dallas is a tough team. They play a hard game, too."

Roope Hintz scored for the Stars, and Bishop was brilliant all night in making a season-high 44 saves. Bishop, who has played just twice since Feb. 4 after spending two weeks on injured reserve, was 4-0 prior to getting hurt but has lost two straight.

Vegas peppered Bishop in the third period when it outshot the Stars 21-1, including a stretch with a 5-on-3 power play. Bishop stood tall in turning away eight shots while the Golden Knights had a two-man advantage.

"We kill off the 5-on-3 and thought we would build momentum off that and we didn't," Dallas coach Jim Montgomery said. "Then they get the miscommunication on the breakout and they get a bounce off a skate. I don't know outside of the 5-on-3 how many scoring chances they had 5-on-5."

Hintz gave Dallas a 1-0 lead although replays showed Alexander Radulov running into Fleury's right elbow and blocker while he was moving into position to make the save. The puck sailed just past Fleury's blocker as it was being interfered with, and though the play was reviewed, officials deemed it a good goal.

Vegas got the equalizer on a power play in the middle of the second period, when Pacioretty ripped a shot top shelf from the right circle. It was Vegas' first power-play goal in four games and just its second in the last eight.

NOTES: After being checked into the boards during the first period by Reaves, Stars wing Andrew Cogliano left the game and did not return due to an upper-body injury. ... Jamie Benn didn't play against Vegas due to an upper-body injury but is expected to return Thursday in Los Angeles. ... Newly acquired Mats Zuccarello, who broke his arm Sunday while blocking a shot from Connor Murphy when the Stars were in Chicago, is expected to miss at least four weeks following surgery. ... Radulov has nine points (three goals, six assists) over his last 11 games. ... Vegas center Paul Stastny has a point in 18 of his last 25 games (five goals, 19 assists). ... Bishop has allowed two or fewer goals in six of his last seven starts.