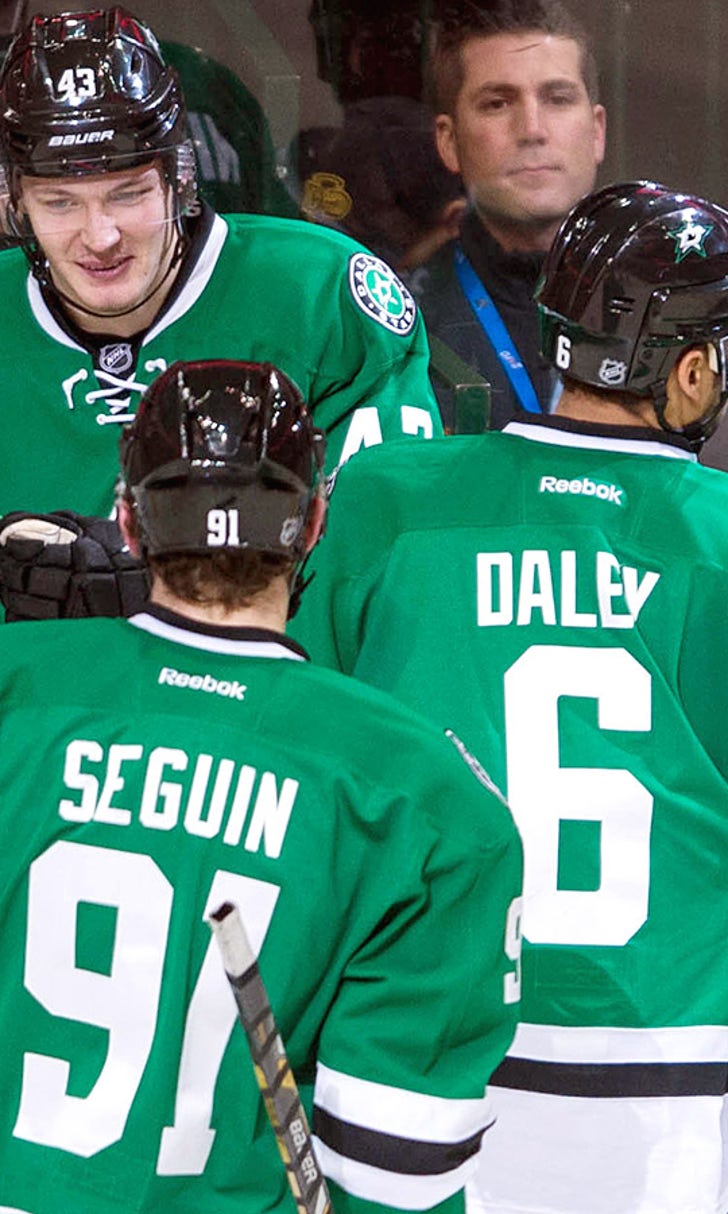 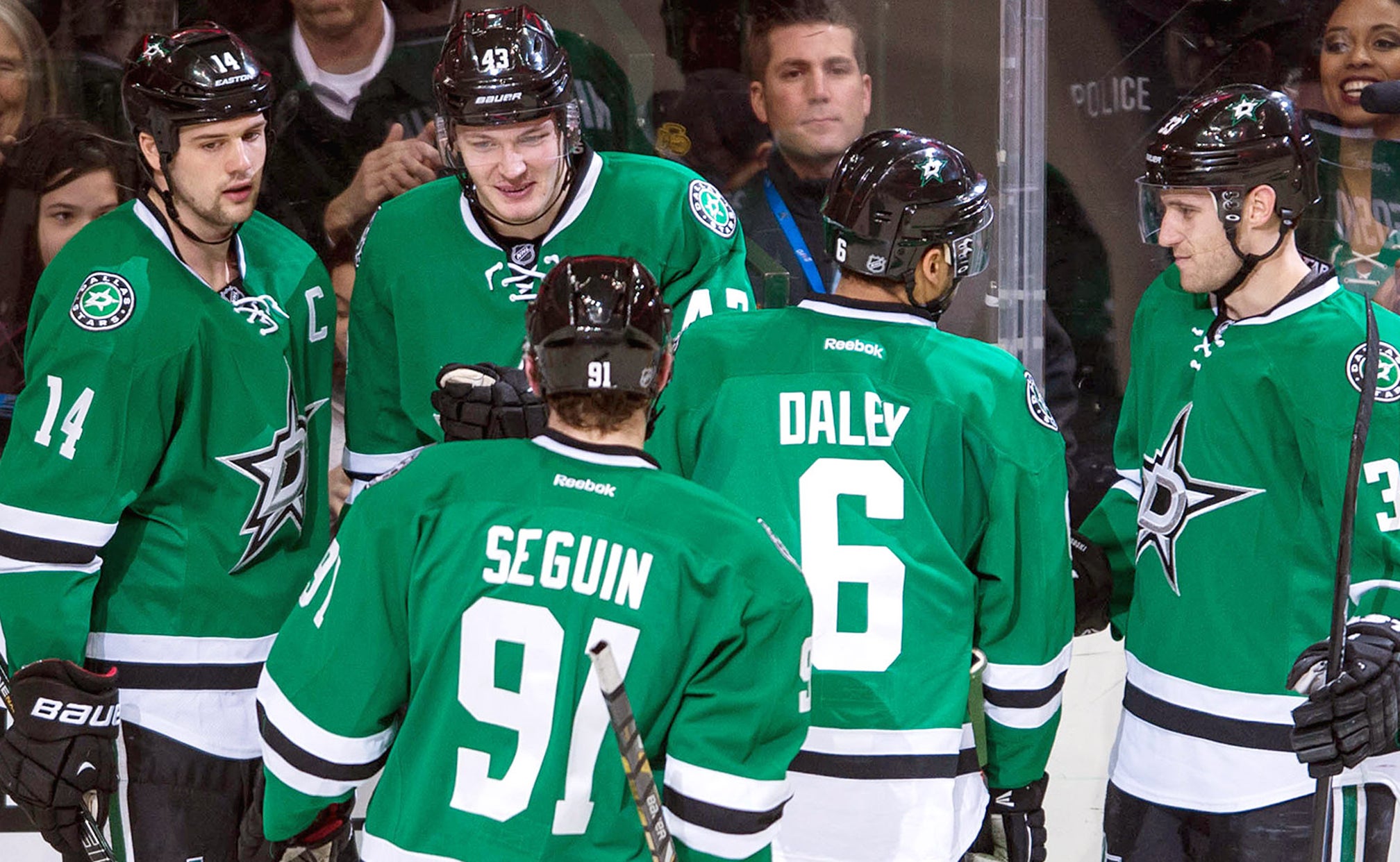 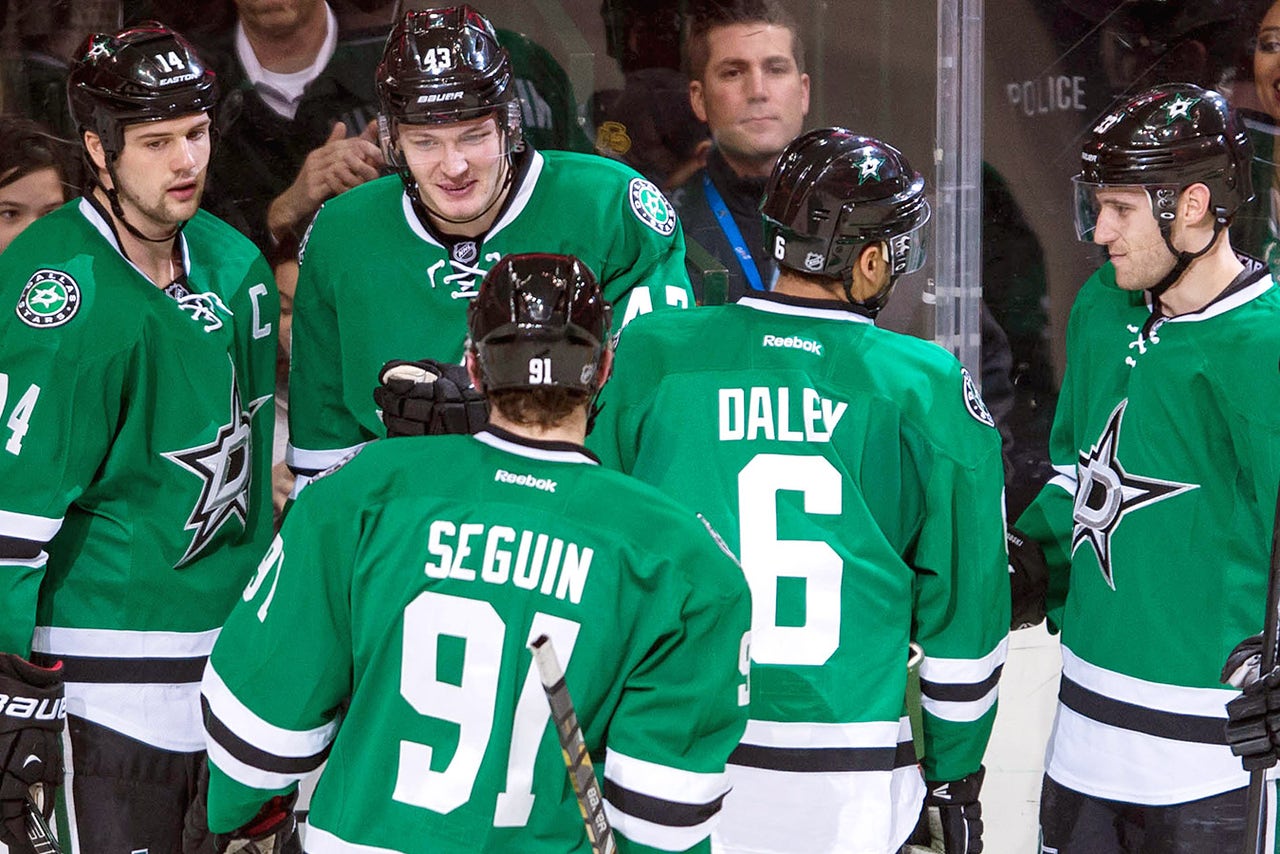 Valeri Nichushkin was in the right place at the right time — twice — on Thursday night.

Nichushkin scored two goals and Jamie Benn notched his 100th career goal and added three assists to lead the Dallas Stars to a 7-1 victory over the Toronto Maple Leafs.

Nichushkin, a rookie, had his first two-goal game to bring his season total to 11 goals in 48 games. He deflected Benn's shot into the net for a 3-1 lead in the second period against Bernier, and put in a rebound in the third against Reimer.

''It's funny how that works,'' Stars coach Lindy Ruff said. ''He got one off his skate when he was in the right spot, and he got a rebound when he was right in front. He has had some nice opportunities for him that haven't gone in.''

Cody Eakin added a goal and an assist, and Alex Goligowski, Sergei Gonchar and Tyler Seguin each had two assists for the Stars, who broke open a 2-1 lead with four second-period goals and ended Toronto's six-game winning streak.

Dallas won its second game in a row since ending a 1-8-1 slide. On Tuesday, the Stars shut out the Minnesota Wild, who had won seven of their nine previous games.

''Something we wanted to do in this game was build off last game,'' Benn said. ''It's two pretty good games in a row, pretty good in all three zones and we eliminated our turnovers.''

Kari Lehtonen made 24 saves against the Maple Leafs to record his 200th career victory.

Nikolai Kulemin had the lone goal for Toronto.

After Nichushkin's first goal, Toronto coach Randy Carlyle replaced Jonathan Bernier with James Reimer, who allowed the final four goals, including one on a power play by Shawn Horcoff and one short-handed by Rich Peverley.

''I think (the goalies) fit in with the rest of our team,'' Carlyle said. ''I'm not going to throw those guys in any more than the rest of the group. We just didn't have anything going.''

Added Reimer: ''It's tough coming in cold, but that's my job as a professional. Tonight, I was the backup goalie and I had to be ready for anything. I'm pretty disappointed in myself that I couldn't make some saves early to kind of keep it close.''

Nichushkin had been moved off the line with Benn and Seguin, and had complained of being fatigued. He had been a healthy scratch for the first time this season for games Saturday and Monday.

Trevor Daley also scored in the second period while each team had only four skaters on the ice.

''(Special teams have) been real important,'' Ruff said. ''The power play has been really good, and we had a big kill when they could have gotten back in the game.''

Benn had given the Stars a short-lived 1-0 lead at 7:09 of the first period. His drive from the top of the slot went over Bernier and under the crossbar.

The Stars regained the lead at 15:47 when Eakin fired a shot from the top of the right faceoff circle for his 12th goal, just 12 seconds after Dallas killed a penalty.

Nichushkin extended the Stars' advantage to 3-1 at 6:36 of the second period when he deflected in Benn's shot from the blue line.

Less than two minutes after Nichushkin's goal, Horcoff took a pass at the blue line, outskated two defenders and beat Reimer with a low shot. At 11:37, Peverley scored when he and Benn skated in 2-on-2. Defenseman Daley sent a slap shot from the top of the right faceoff circle into the net at 15:33 for his third goal this season and a 6-1 lead.

''We worked hard and created a turnover,'' Daley said. ''I just closed my eyes and shot.''

Peverley added: ''We kept trying to score. That's what you have to do. You don't want to let up.''

NOTES: Benn, 24, became the first Dallas player to reach 100 career goals before his 25th birthday. ... Eakin left in the third period because of an upper-body injury. ''I think he's going to be OK,'' Ruff said. ''We'll see tomorrow.'' ... The Stars' Alex Cole played in his 800th NHL game. ... An assist on Kulemin's goal gave Nazem Kadri five in the last five games. ... The last time Toronto won seven consecutive games was in 2003-04. ... Dallas had lost its previous seven games against Eastern Conference opponents. ... The Stars' power play has scored in six games in a row, with a total of seven goals. Dallas killed all three minor penalties, and has been successful 11 consecutive times. The Maple Leafs have allowed 11 power-play goals in their last 14 games. ... In 58 career games against Toronto, Gonchar has 56 points (16 goals, 40 assists).