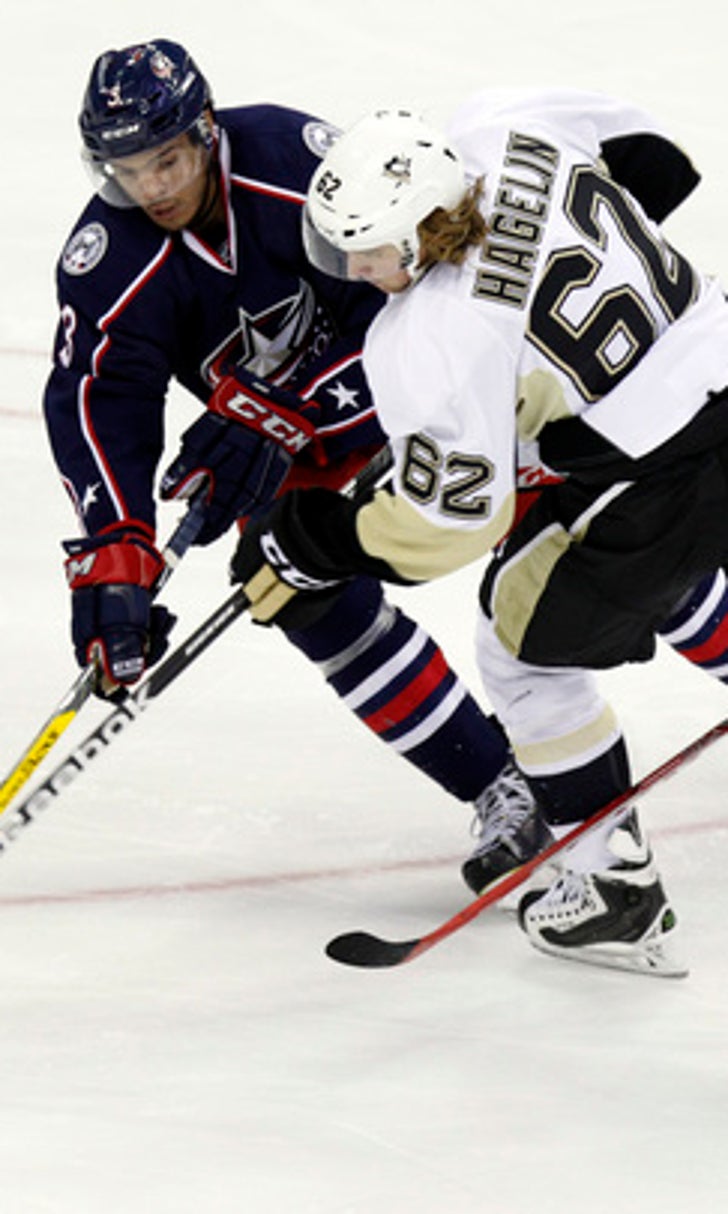 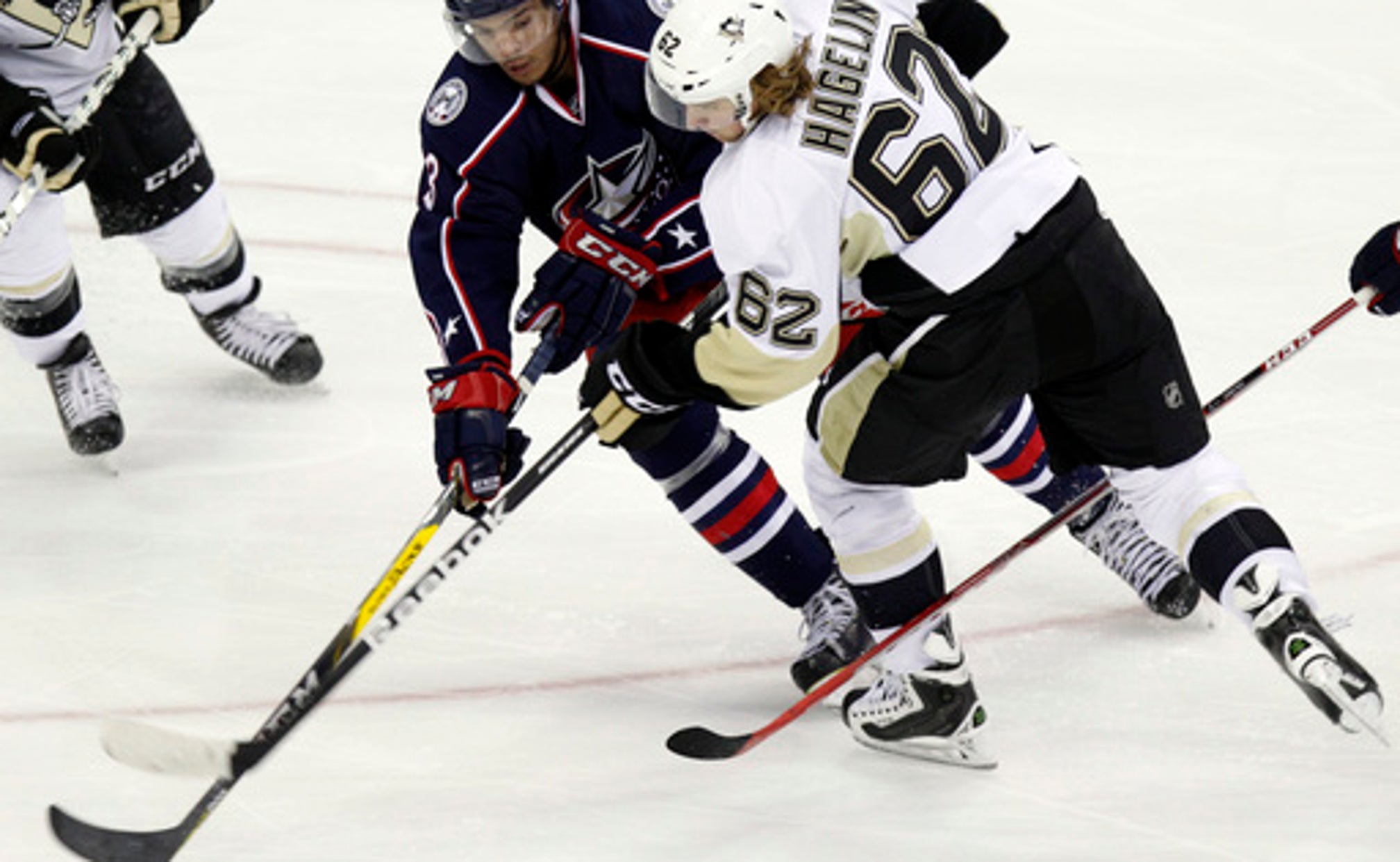 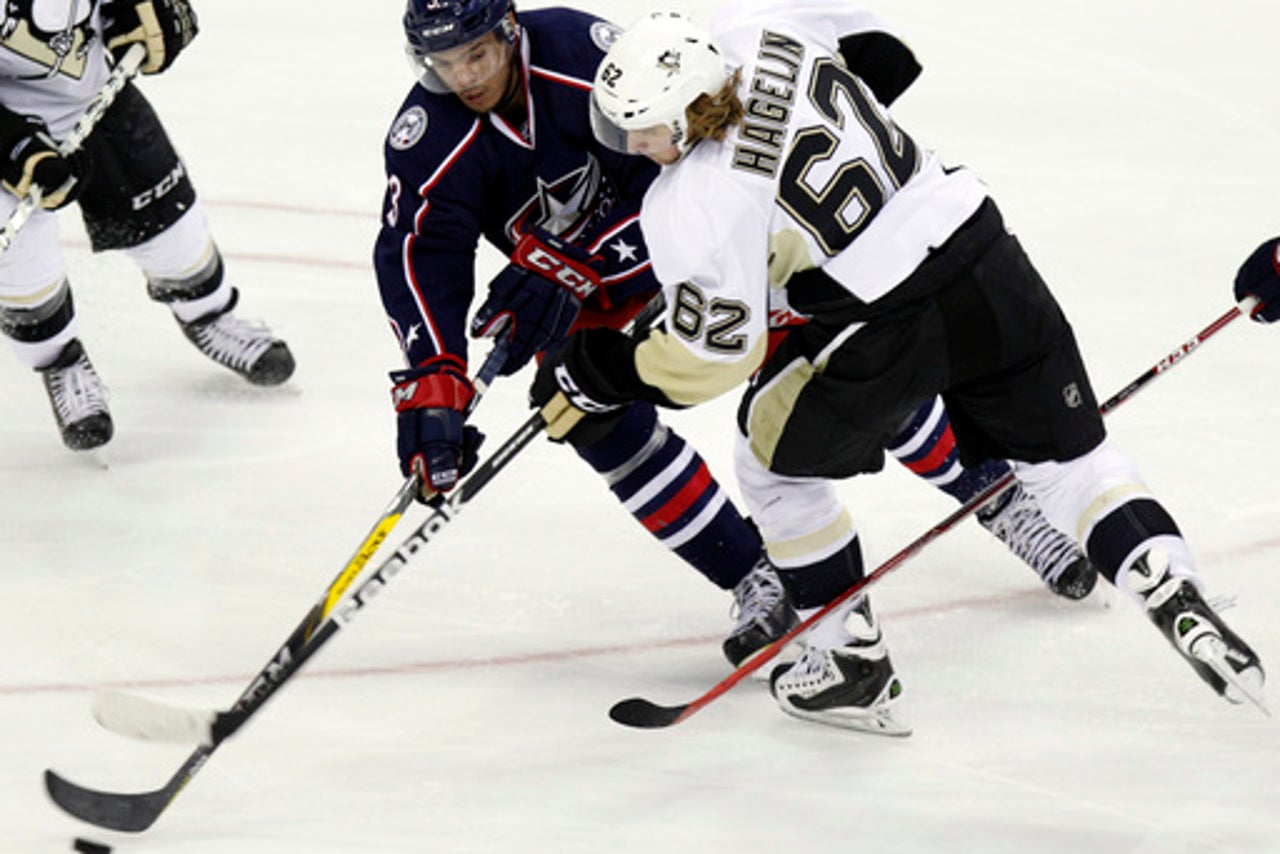 COLUMBUS, Ohio — The Pittsburgh Penguins absorbed one heavy check after another to help pave the way for Marc-Andre Fleury to join a select group of NHL netminders.

"We just stayed with it," said captain Sidney Crosby, who extended his point streak to seven games with an assist. "They forecheck hard. They forced us a lot. I thought Flower made big saves, too, when we needed it."

Fleury made 11 of his 25 saves in the third period.

"It's pretty cool," said Fleury, selected first overall in the 2003 draft. "I didn't know before the game that is was coming up. I'm just happy that we won tonight and got those two (points), but it's a little more special."

Kris Letang and Chris Kunitz scored, and Carl Hagelin had the go-ahead goal early in the second period for Pittsburgh. Evgeni Malkin -- who finished with only 8:59 of ice time and left in the second period with an apparent injury -- and Phil Kessel each had two assists.

Penguins coach Mike Sullivan liked how his players didn't stray from the plan of playing level headed. The focus was discipline and moving the puck with pace.

"You just don't get involved," he said. "It's as simple as that. What we talked about is playing to our strengths and making sure that we played the game we wanted to play. I thought we did."

Gregory Campbell had a goal and an assist and Cam Atkinson also scored for the Blue Jackets, who came into the game with points in 12 of their last 15.

Sergei Bobrovksy made 28 saves in his first action since Jan. 21. The former Vezina Trophy winner missed the previous 19 games recovering from his third groin injury this season that has limited him to 28 games.

"I felt good," Bobrovsky said. "I felt better as the game went one."

Sidney Crosby and Brandon Dubinsky were pitted against each other for the first time since Dubinsky crosschecked the superstar in the neck on Nov. 27, but they didn't lock horns. Dubinsky was suspended one game by the NHL.

"We played between the whistles," Sullivan said.

Bobrovksy tested his groin early. He stuck out his pad to make a nice save 12 seconds into the game, but he put himself in a few tough spots shortly after during an action-packed first 5 minutes. Bobrovsky sailed a puck over the glass for a delay of game penalty and proceeded to lose his stick on the Penguins' power play, leading to some tense moments for Columbus.

Yet it was Columbus that scored first when Jared Boll set up Campbell for his first score in 47 games at 5:05 on a 2-on-1 rush.

After some rough stuff resulted in a Penguins power play, Letang tied it at 14:23 for his 13th with a one-timer inside the blue line.

Kunitz's 13th put the Penguins ahead 2-1 45 seconds into the second. He whacked in a loose puck after the Blue Jackets couldn't clear the zone.

"The second period we struggled defending a little bit," Columbus coach John Tortorella said. "That was our bad period and they capitalized on it."

A bouncing puck skidded behind Pittsburgh's Olli Maatta, and Atkinson scored his 24th on a breakaway deke of Fleury about 2 minutes later. Fleury redeemed himself in the period by poke-checking the puck on another breakaway by Atkinson.

But 1:49 later, after three successive saves by Bobrovksy in traffic that the Blue Jackets couldn't clear from danger, Hagelin jabbed the puck in from the crease.

"We didn't defend well around our net," Tortorella said.

Columbus' Ryan Murray clanked a slap shot off the crossbar with 4:50 remaining.

NOTES: The teams split the season series 2-2-0. ... Crosby has three goals and eight assists during his seven-game point-streak. ... Columbus LW and Pittsburgh-native Brandon Saad missed a third consecutive game with an upper-body injury. ... C Eric Fehr was back in the lineup for Pittsburgh. He missed 17 games with a lower-body injury. ... The Blue Jackets kicked off a five-game homestand and the Penguins close out four-straight road games Sunday in New York against the Rangers.