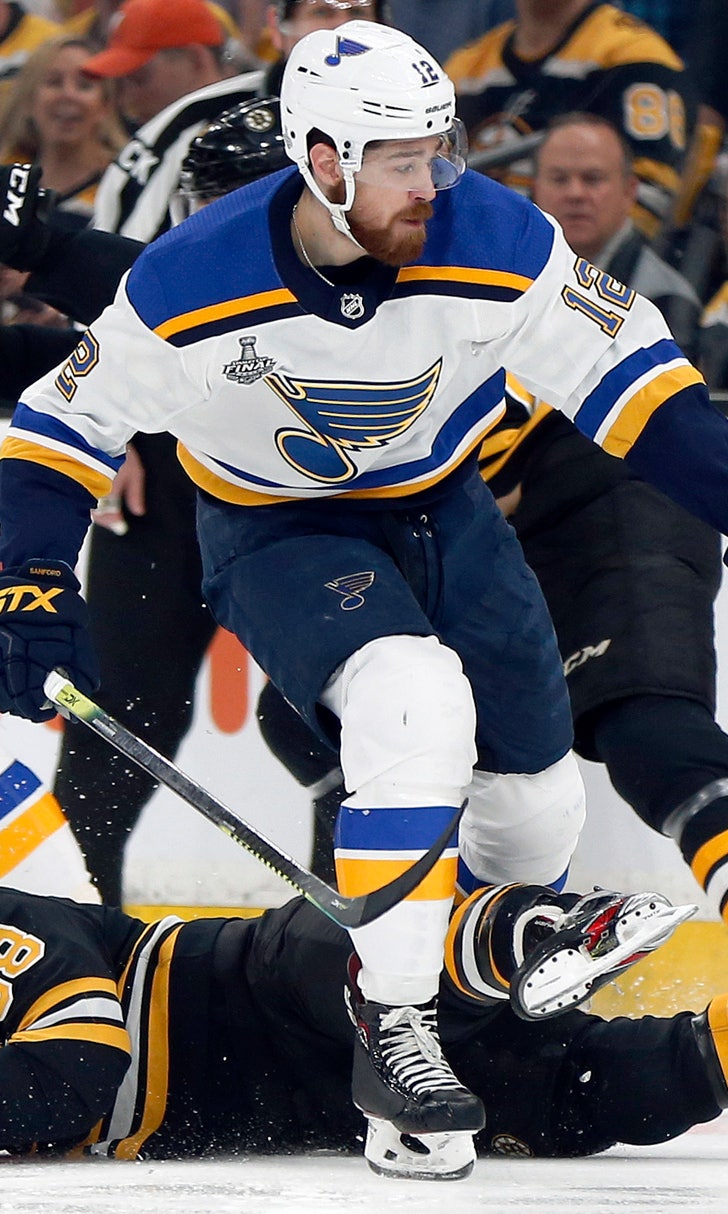 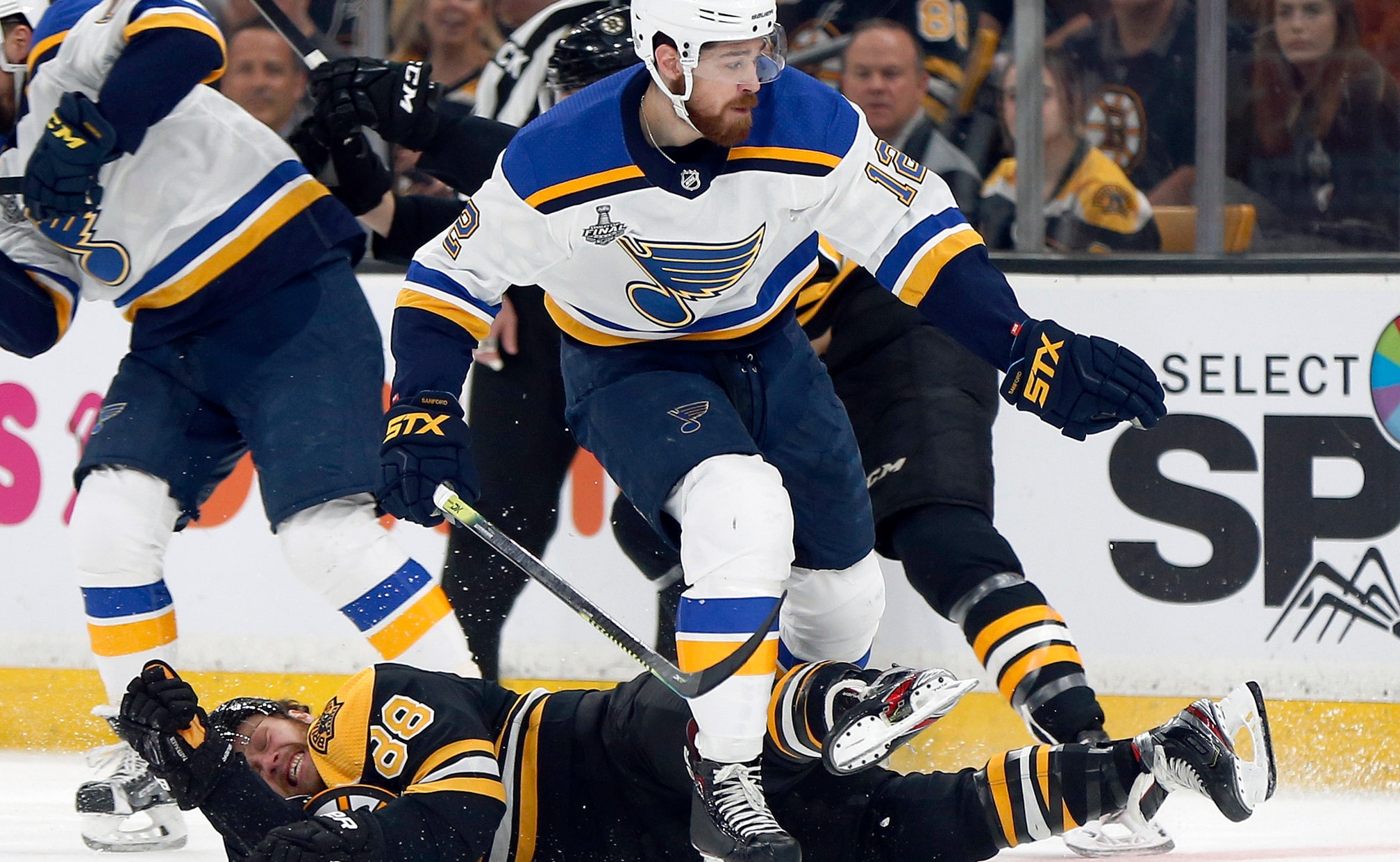 ST. LOUIS (AP) — Had Oskar Sundqvist not gotten suspended and Robert Thomas ruled out with a nagging injury, Zach Sanford might never have gotten a chance to show his stuff on hockey's biggest stage.

If Vince Dunn not taken a puck to the mouth during the last round, Robert Bortuzzo might not have had the chance to score a key goal in the Stanley Cup Final.

This is the magic of the St. Louis Blues in the playoffs and even more specifically their series against the Boston Bruins. They've dressed a lottery ball machine amount of lineup combinations this postseason and because of suspensions and injuries in the final will have their sixth different lineup in six games.

Instead of interrupting continuity that's usually paramount in the playoffs, the Blues' game of musical jerseys with players in and out of the lineup has given them a variety of looks for the Bruins to contend with and contributed to St. Louis being on the verge of winning the Stanley Cup.

"You never want to see guys get suspended or go down with an injury," forward Patrick Maroon said Saturday. "But Zach Sanford, Sammy Blais and Robby Fabbri have done a really good job filling in. Thomas was playing until he went out. They've been here all year, and they know what it takes to win."

Maroon is one of only 12 skaters plus goaltender Jordan Binnington to play in all 24 of St. Louis' playoff games so far. That number will dip to 11 with Ivan Barbashev suspended and the very real possibility Thomas is ready to return after missing the past four games with what's believed to be a hand/wrist injury.

Injury attrition can take its toll this time of year, something the San Jose Sharks found out when the Blues eliminated them without Erik Karlsson, Joe Pavelski and Tomas Hertl. The Blues have kept on chugging through the injuries and gotten impressive performances from players shuffling in and out of the lineup like Bortuzzo or returning off a long layoff like Sanford and Fabbri.

Barbashev isn't available for Game 6, and coach Craig Berube said other decisions will be made closer to puck drop. Top-line forward Vladimir Tarasenko and bottom-six grinder Alex Steen are expected to play after missing practice for maintenance, but there are other questions about who's in and out and St. Louis won't have much of a drop-off either way.

"We have good depth, which is very important on the back end and up front," Berube said. "A guy like Sanford coming in and doing a good job for us after being out for some time, and Sammy Blais, just different guys. It's really important."

Sanford has had some significant jump in his legs the past three games after sitting out six weeks as a healthy scratch. Dunn showed little rust from missing almost three weeks before getting back in for Game 4.

And there has been no pouting from guys like Bortuzzo and fellow defenseman Joel Edmundson trading places on the ice and in the press box.

The Blues had already done a strong job in the first three rounds of wearing down opponents as series dragged on, and they're in the process of doing the same to Boston. They play the same style, but the Bruins never seeing the same St. Louis team twice in a playoff series that usually breeds familiarity and contempt makes it even more difficult to prepare.

Boston could dress its same lineup from Game 5 because forward Noel Acciari is expected to play after leaving in the third period Thursday and Marcus Johansson had no lingering effects from the hit on him Barbashev was suspended for.

While the Bruins promoted Johansson to their top power-play unit to get that unit going, the Blues have to adjust without Barbashev, who's a key penalty killer.

"He's physical for us," forward Brayden Schenn said. "He does a good job on the PK, scoring some goals. We can't worry about him being out. You've got to worry about someone else stepping up, stepping in and filling his role.

That has been key to the Blues' run the past two months, in large part because of injuries and Berube shaking things up with coach's decisions for performance. The suspensions of Sundqvist and now Barbashev forced Berube's hand even more, but it hasn't led the Blues to abandon their bruising approach.

"If that was a thing, then we'd have slowed down on our physical game and that's not us," Carl Gunnarsson said. "I think we've just got to keep on going, just going to keep it clean and keep doing what we're doing."