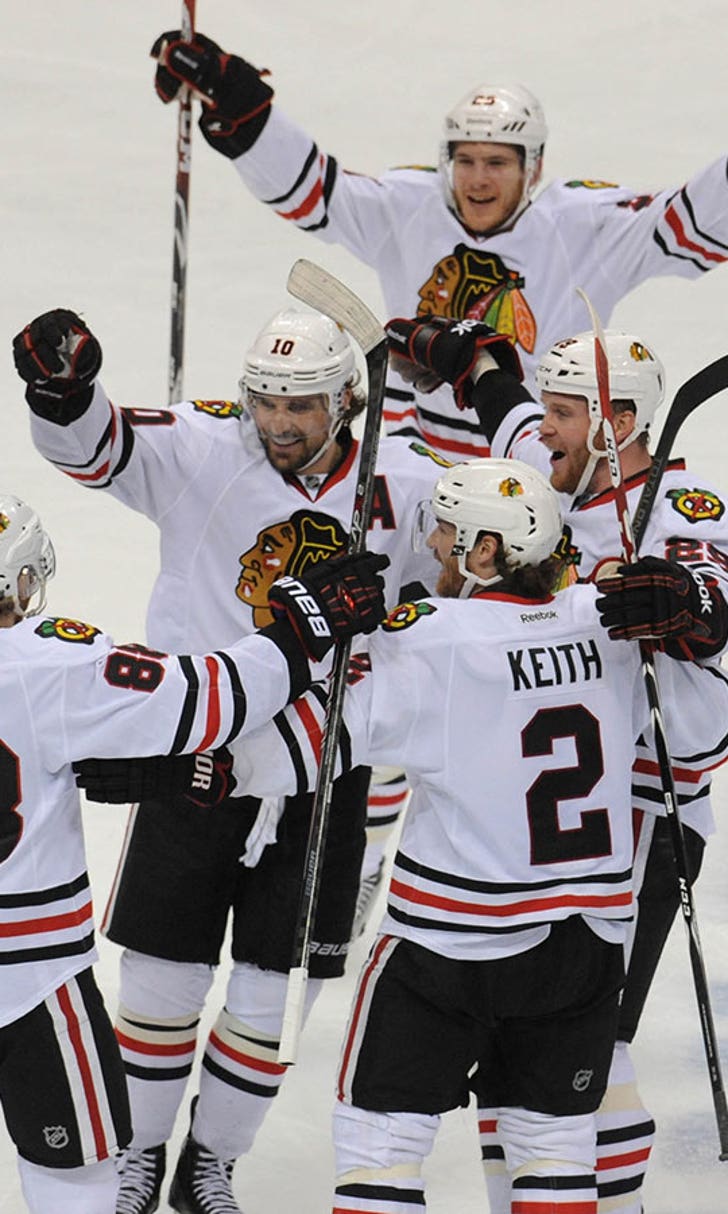 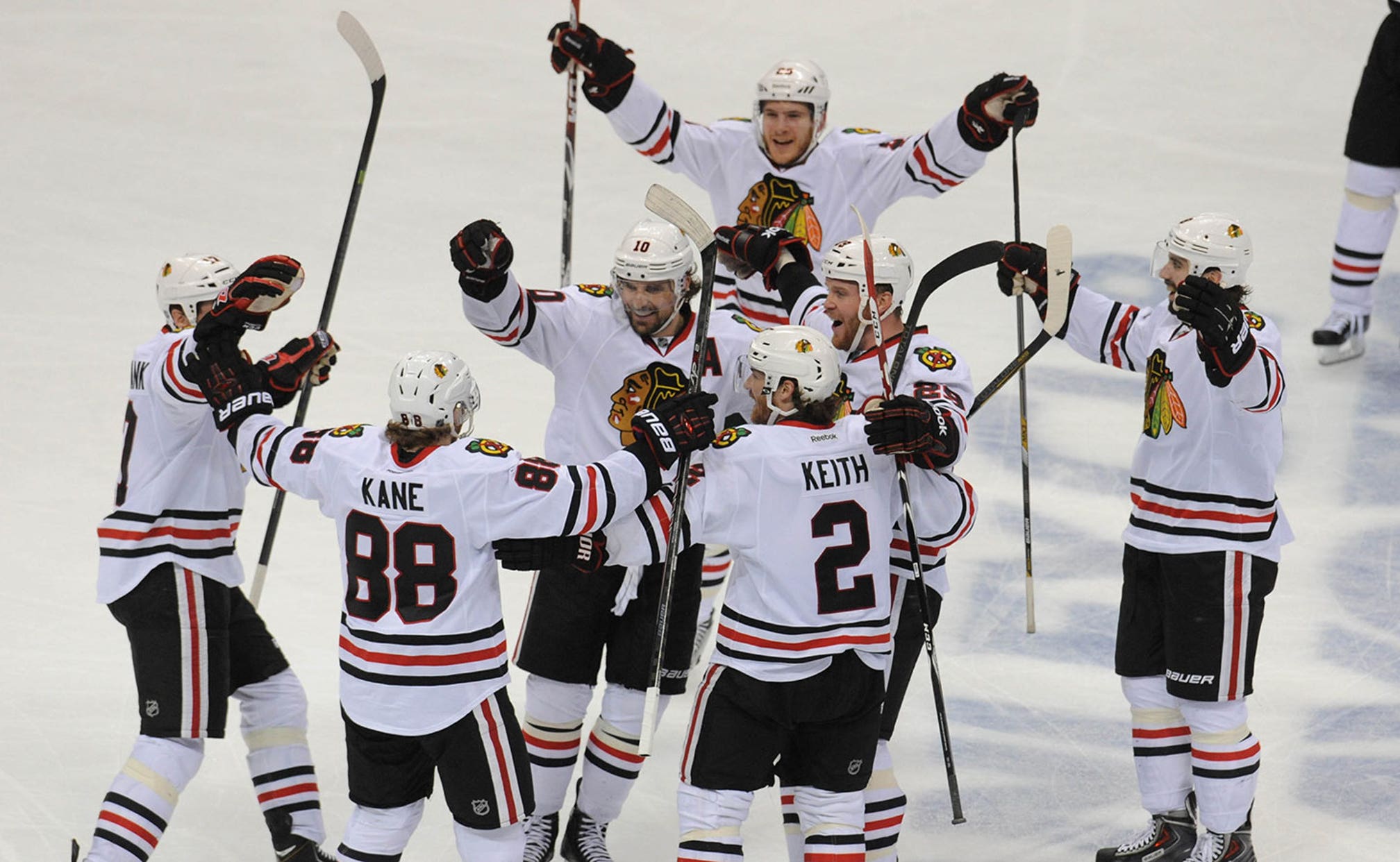 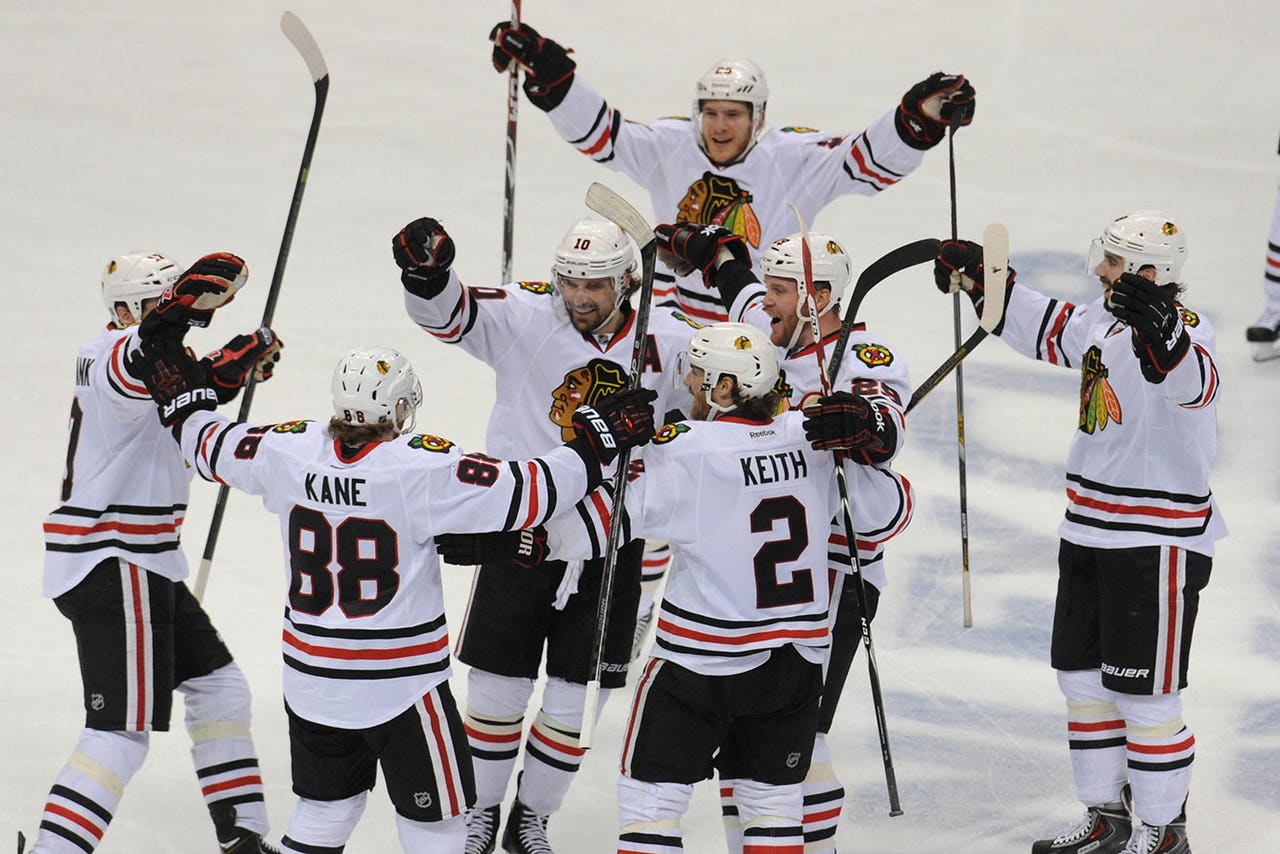 The Chicago Blackhawks were chasing for much of the game, and the Minnesota Wild just kept generating chance after chance to score.

Once overtime arrived, though, all Patrick Kane needed was one friendly bounce to finish off another opponent.

Kane scored on a backhand at 9:42 of the extra period to lift the Blackhawks to a 2-1 victory over the Wild in Game 6 to clinch their second-round Western Conference series on Tuesday night, the fourth playoff overtime winner of his career.

He also did it in Game 4 of the Blackhawks' series against St. Louis to even the series at 2-2. Chicago would win the next two games to take the series in six games.

"He's a special player, and guys have that instinct, have that knack of finding pucks, wanting to be out there, wanting to score," Blackhawks coach Joel Quenneville said.

Kris Versteeg scored 1:58 into the game and Corey Crawford came up with tough save after tough save among his 34 stops for the Blackhawks, who advanced to the Western Conference finals to meet either Anaheim or Los Angeles. The Ducks lead the other semifinal series 3-2, with the Kings hosting Game 6 on Wednesday night.

Since 2009, the first postseason appearance for Kane and co-star Jonathan Toews, the Blackhawks are 14-0 in Games 5 and 6 of playoff series that were tied after Game 4. They're also 12-2 in games with a chance to win a series, including 6-1 on the road.

"We probably didn't play our best tonight, but just finding a way to win is something this team has done for many years now," Kane said.

Erik Haula scored his fourth goal of the playoffs and Ilya Bryzgalov stopped 25 shots for the Wild.

Minnesota pushed a frenetic pace for much of the night but paid for all those missed prime opportunities when a simple dump-in behind the net by Brent Seabrook took a strange bounce off the glass back toward the slot.

The puck slid past Peter Regin as he was tied up with a defenseman.

Kane snagged it, deked once and flipped it into top of the net. He said he wasn't sure right away if the puck was in.

But he soon found out.

"It seems like it was not our luck tonight," said Bryzgalov, who nearly matched Crawford save for save. "We hit some posts in the third period and they got like the first goal after some crazy two bounces."

The Wild kept up the pressure on Crawford that they created in the middle of the game, but whether it was the goalie's pads, blocker or a crossbar in the way, the pucks didn't go in.

"We really believe that we were capable of doing more than just winning this game," a dejected Wild coach Mike Yeo said, adding: "Our guys did everything that we asked and they laid it on the line, and that's what hurts."

The Blackhawks scored first in six of their previous 11 games in these playoffs and won each time, their only victory without taking the first lead coming in Game 5 against the Wild.

Versteeg put them right back in control just 1:58 in on his 28th birthday, when he outmuscled Keith Ballard for possession in the corner and flipped an bad-angle shot that bounced awkwardly among the bodies around the crease, hit the back of Clayton Stoner's leg and skidded past Bryzgalov.

The Wild got their break - or, rather, breakaway - soon after the first intermission when Haula sped to snag a pass by Matt Cooke that banked perfectly off the boards and he snapped the puck on the rush past Crawford's glove.

Each side brought an aggressive game plan, with defensemen pinching down often and all kinds of rushes developing both ways, particularly in that breathless penalty-free second period that had the home team buzzing so much that Quenneville used his timeout.

Crawford made two saves apiece on a pair of breakaways by Justin Fontaine. Cody McCormick tried a spin move to fend off Duncan Keith and nearly got the puck past Crawford, who used his left pad to stop it.

"On the road this was probably one of my bigger games of the playoffs so far," Crawford said. "This team seems to enjoy that position where we have a chance to eliminate and move on to the next series. We had a chance to do that and we stuck with it all game."

NOTES: Kane moved into the NHL lead with 35 postseason goals since 2009. ... The Wild had goalie Darcy Kuemper dressed for action for the first time since he was removed in the third period of Game 6 of the first round series against Colorado because of what the team labeled an upper body injury. ... The Blackhawks fended off two more power plays in the third period and dropped the Wild to 2 for 20 in the series.