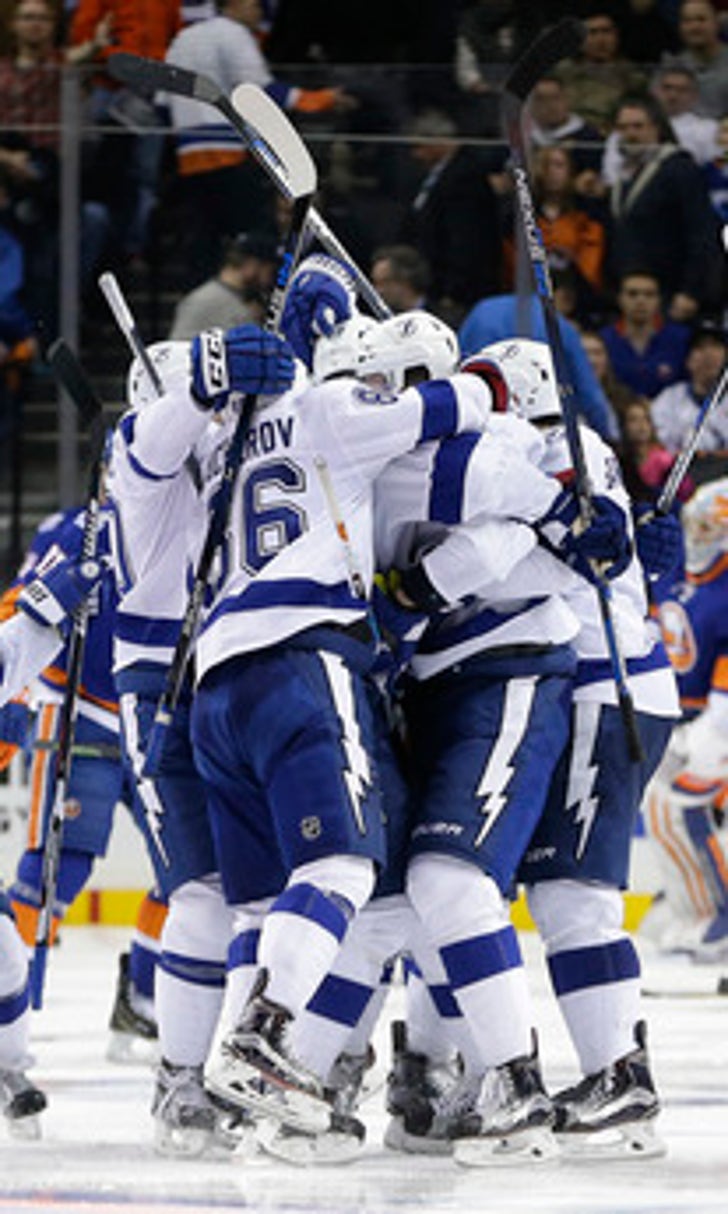 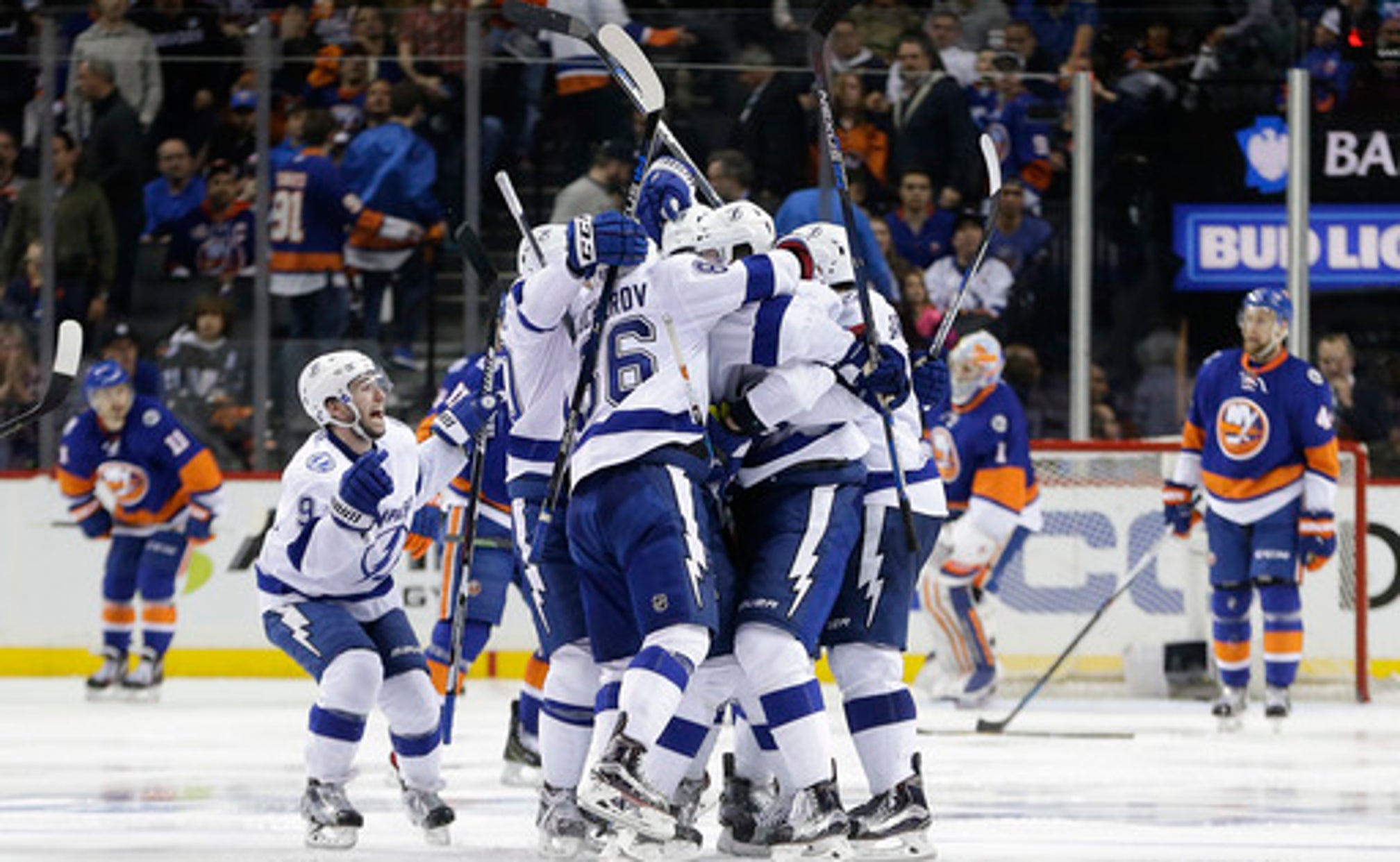 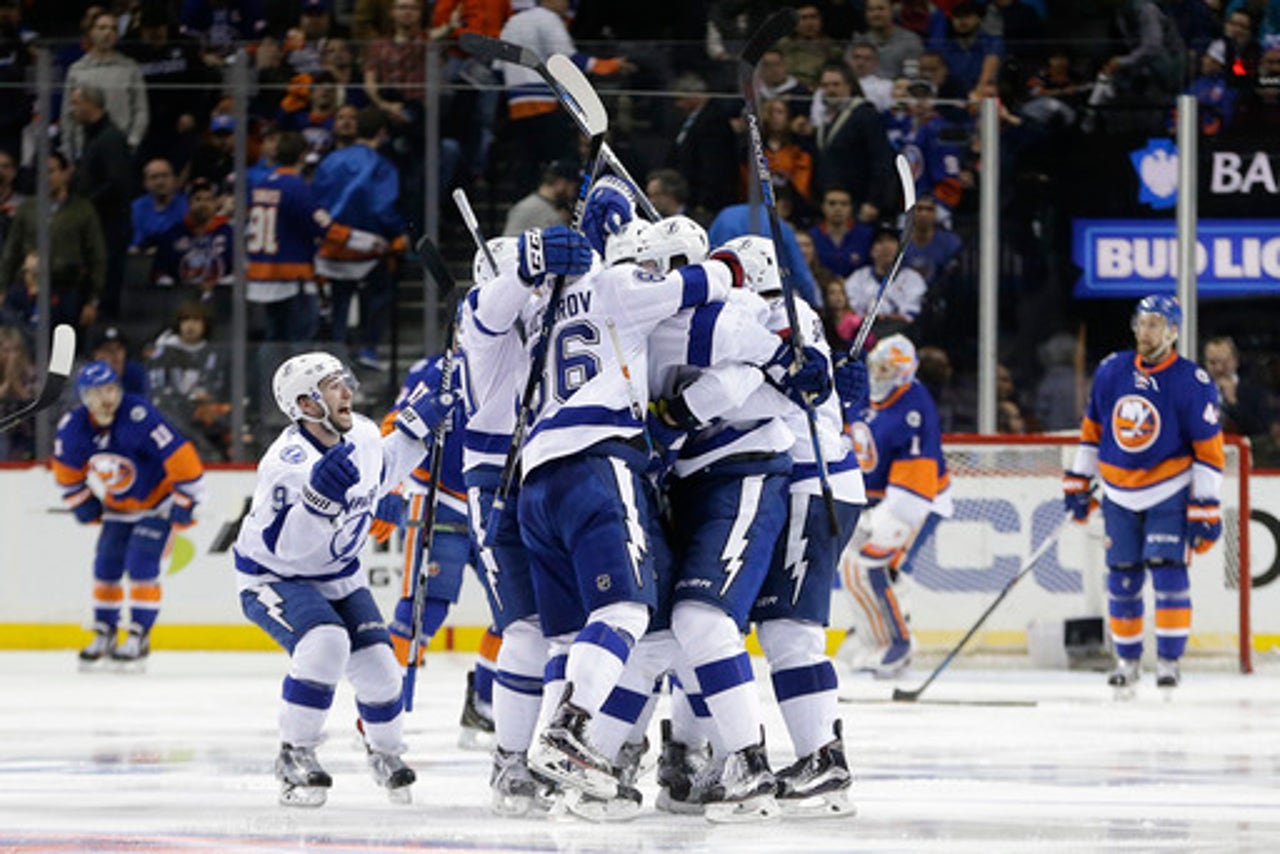 Jason Garrison scored 1:34 into the extra period to give the Lightning a 2-1 victory over the Islanders on Friday night for a 3-1 series lead.

Garrison took a pass from Andrej Sustr and fired a slap shot from the right faceoff circle past goalie Thomas Greiss. The Lightning won two straight overtime games in Brooklyn to move them one win away from reaching the conference finals for the second straight year.

''Sustr made a nice play over to me, on a screen I think, and I was able to find the back of the net,'' Garrison said. ''That's a nice feeling. Any goal in the playoffs is big, obviously an overtime one is definitely a sigh of relief.''

Nikita Kucherov, who tied the score with 38.4 seconds left in regulation in Game 3 on Tuesday night, evened this one at 7:49 of the third for his NHL leading eight of the playoffs for Tampa Bay. He took a pass from Tyler Johnson and fired a slap shot from the left faceoff dot past Greiss' blocker.

''He's proven he's not a one-hit wonder,'' Lightning coach Jon Cooper said about Kucherov, who had 10 goals and 12 assists during the team's run to the Stanley Cup finals last year. ''Just continues to amaze. Pretty impressive.''

Ben Bishop made 27 saves for Tampa Bay, including 15 in the first period.

Kyle Okposo scored early in the first for the Islanders, and Greiss stopped 20 shots.

New York came out aggressive at home for the second straight game, but again gave up a lead in the third period and is now loss from being eliminated.

''The last two games have been good hockey games,'' Islanders coach Jack Capuano said. ''That's how close these two teams are.... We gave up five shots in the third period, maybe one chance, and they tie the game. You can't ask our guys for too much more.''

Okposo, who had a chance for a second goal midway through the second but was stopped in close by Bishop, didn't take much solace in the team's strong effort.

''At this time of year it's not about playing well and losing,'' he said, ''you got to win. It doesn't matter if you play bad and win, play good and win. You got to find a way to win the game and we just didn't do it tonight.''

Game 5 of this best-of-seven series is Sunday in Tampa, Florida.

There was a delay at the start of the third period to repair boards damaged by the Zamboni during the second intermission. When play resumed, 31 minutes had elapsed since the end of the second period.

Greiss left the game about 1 1/2 minutes into the second due to an issue with his skate. Jean-Francois Berube came on for his playoff debut and stopped both shots he faced over 4:47 before Greiss returned with 13:40 remaining in the period.

Okposo got the Islanders on the scoreboard less than five minutes into the game. With Tampa Bay's Mike Blunden off for roughing, Okposo took a pass from Nikolay Kulemin from behind the net, settled it just to the right of the left faceoff circle and fired it past Bishop at 4:20. It was Okposo's second goal of the playoffs - first since Game 1 of the first round against Florida.

Ryan Strome thought he had doubled New York's lead at the 9:11 mark as he deflected a pass from Steve Bernier, but it was smothered by Bishop. Strome raised his stick in celebration, but the officials never signaled a goal and the call was upheld after a video review.

New York had a four-minute power play later in the first when Tampa Bay's Ryan Callahan was given a double-minor for multiple hits on Thomas Hickey, but the Islanders got just one shot on goal and another that was wide.

''You got to tip your hat to Bish because he saved us in the first, especially when we had to kill three penalties, (one for) four minutes straight,'' Cooper said. ''That could've changed the type of game especally (since) we didn't have too much going.

NOTES: Lightning improved to 7-3 in Game 4s on the road. ... Bishop played in his 34th postseason game, passing Nikolai Khabibulin for the most by a Tampa Bay goalie. Bishop also moved one win behind Khabibulin (21) for the franchise lead. ... After going 24 for 25 on the penalty-kill in the first round against Detroit, the Lightning are 12 for 16 against the Islanders - giving up a man-advantage score in each of the four games. ... Islanders D Ryan Pulock returned after missing the last five games due to an upper body injury suffered in Game 4 of the first round against Florida. ... The Islanders scored first for just the third time in 10 games this postseason.