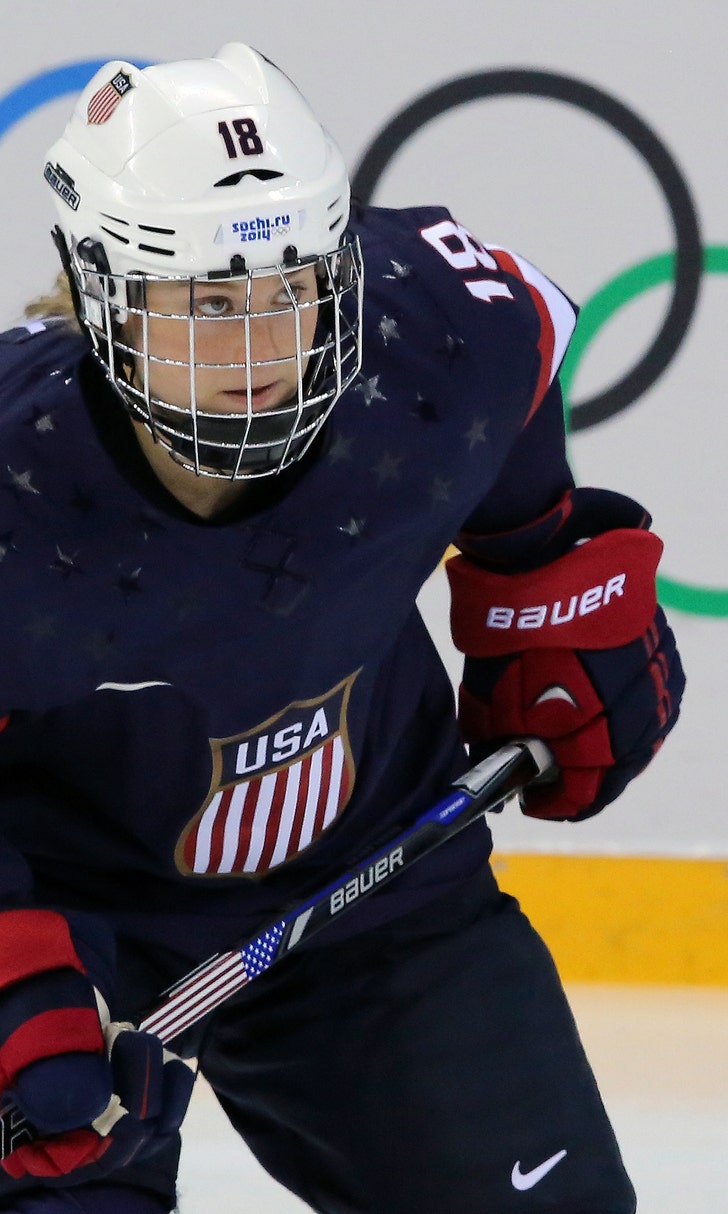 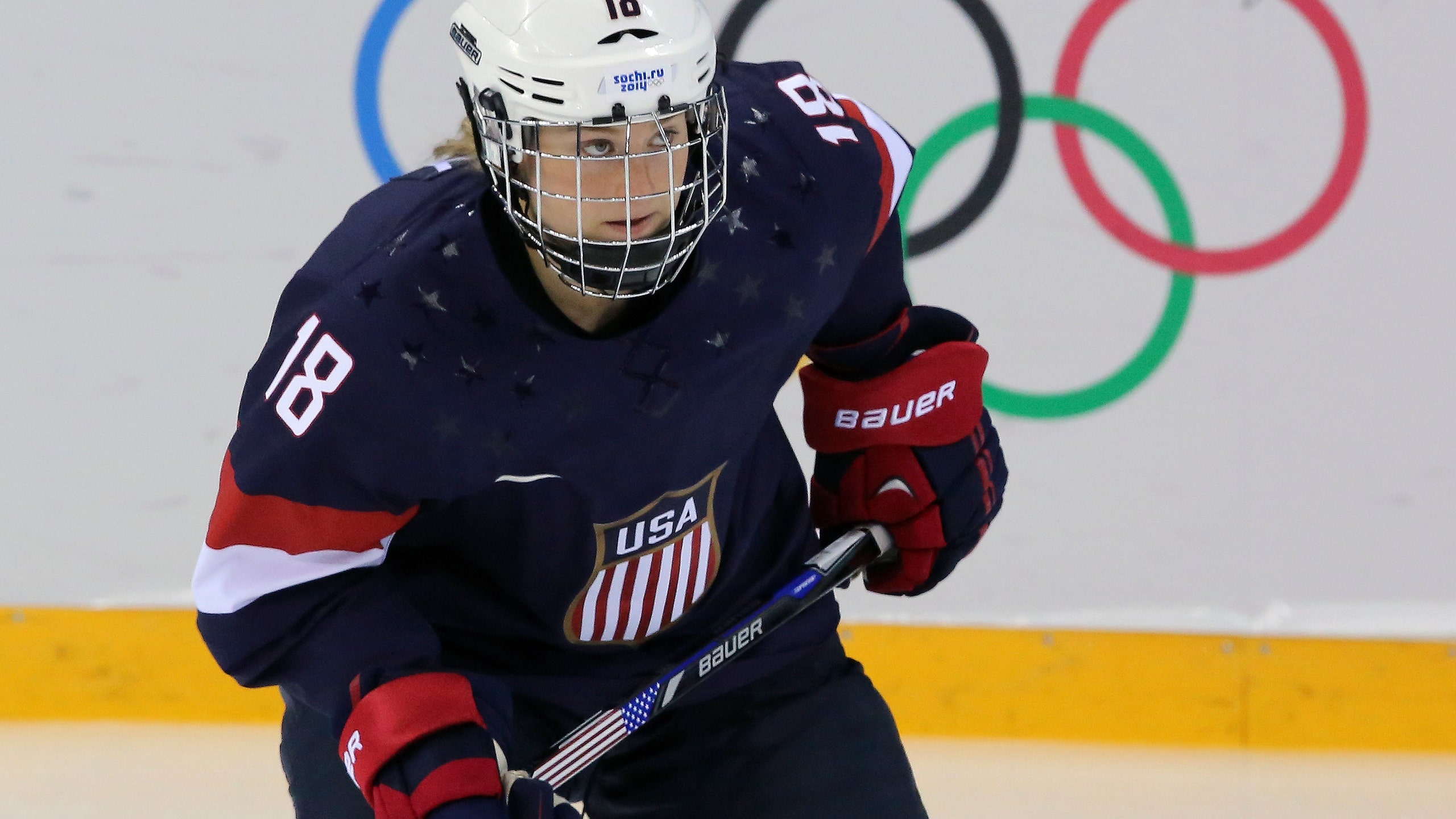 GLENDALE, Ariz. (AP) — Lyndsey Fry could have continued playing hockey. She had a stellar collegiate career, a degree, an Olympic silver medal placed around her neck, so playing professionally was a logical next step.

The grueling rehab from hip surgery it would take to get back to an elite level was not all that appealing. Nor was playing in a women's professional hockey league on a less-than-livable salary — or being away from her family.

Fry could have gone into the financial world, maybe work on Wall Street. She had a Harvard education, so there was an expectation to get a "Harvard" job. It certainly would pay well. That wasn't the right fit, either. She didn't have a passion for it.

Fry coveted more than money and fame. She wanted to pay back a community that helped a little girl in Arizona with plastic skates strapped onto her shoes transform into one of the world's best hockey players.

Now working with the Arizona Coyotes, she's doing just that.

"I never would have dreamed I would be in this role," she said. "I just kind of hoped to be able to help where I could, coming back to the Valley. To be in this role and really having some leverage to do what I set out to do has been really, really incredible."

Growing up in Arizona, Fry had limited opportunities to play hockey, particularly against other girls.

In her new role with the Coyotes, she will make sure other hockey-mad girls like her will get the chances they deserve.

Fry returned to the Valley of the Sun to earn an MBA at Arizona State and worked with the Coyotes as an instructor at various clinics. She also teamed with Coyotes director of amateur hockey development Matt Schott to run the Small Frys, a continue-to-play program for girls 6-12 who have gone through the organization's Little Howlers program.

Fry took on a bigger role with the Coyotes in November, when she was hired as a brand ambassador and special adviser to president and CEO Ahron Cohen. Fry's primary focus is to grow hockey around the state, particularly women's hockey, and to assist Cohen in engaging the hockey community in Arizona.

"The thing that was instantaneously obvious to me was her unbelievable passion for growing hockey and being a part of this community," Cohen said. "From that moment, I said we have to find a way to get Lyndsey involved with us here. She just naturally radiates positivity and people just want to talk to her."

Hockey has already seen a rise in the desert.

In 1996, the year the Coyotes arrived from Winnipeg, there were about 2,100 registered youth and adult hockey players. The state had three rinks, two in Phoenix, one in Flagstaff.

Fry should only boost those numbers.

She and Toronto Maple Leafs star Auston Matthews are Arizona's greatest hockey success stories, players who overcame long odds to reach the pinnacle of their sport. By returning to the Valley of the Sun, Fry gives girls hockey players an up-close look at what's possible with a little work and dedication.

"She's very inspiring for a lot of kids out there," Cohen said. "The two greatest success stories in terms of hockey in Arizona are her and Auston Matthews. It's pretty cool to see kids look up to her and I'm hopefully five and 10 years from now we have a whole lot more kids like Auston Matthews and Lyndsey Fry playing at the highest level because of the work that Lyndsey and this Coyotes organization has done."

Fry had a long road to the top.

Inspired by the 1990s "The Mighty Ducks" movies, she first started skating with plastic skates strapped to her shoes. She played a year of roller hockey and switched to the ice when a rink was built in her hometown of Chandler.

Fry was forced to play against the boys at a young age because the number of girls players could nearly be counted on one hand. She held her own against the boys and when it came time to play at the elite girls level, there wasn't much competition, so she ended up playing for a team in Colorado.

Fry made the trip to Colorado every two weeks for games and practices, staying with families in the area, including former NHL player Pierre Turgeon. She became good friends with Turgeon's daughter, Liz, and made a vow at their final game together that they'd play again with each other on the U.S. Olympic Team.

While Fry was a freshman at Harvard in 2010, Liz Turgeon was killed in a car crash, devastating her family and her close friend. Fry nearly quit hockey, but the help of friends and family — and vow with Liz — pulled through and dedicated herself to the sport they both loved.

"I just kind of called on her memory to help push me through," she said.

Fry pushed herself into the sport's brightest spotlight, becoming a key member of the U.S. Olympic Team that took silver at the 2014 Sochi Games. On the podium in Russia, her thoughts veered toward the road behind her and what lie ahead.

"It was like a movie," she said. "I kept having these flashbacks of all the people who helped me get to that moment," she said. "Most of those people were from the Arizona hockey community and I knew that I wanted to give back to that."

Now back home, Fry is making the most of it, using her skills on and off the ice to push hockey in Arizona forward.