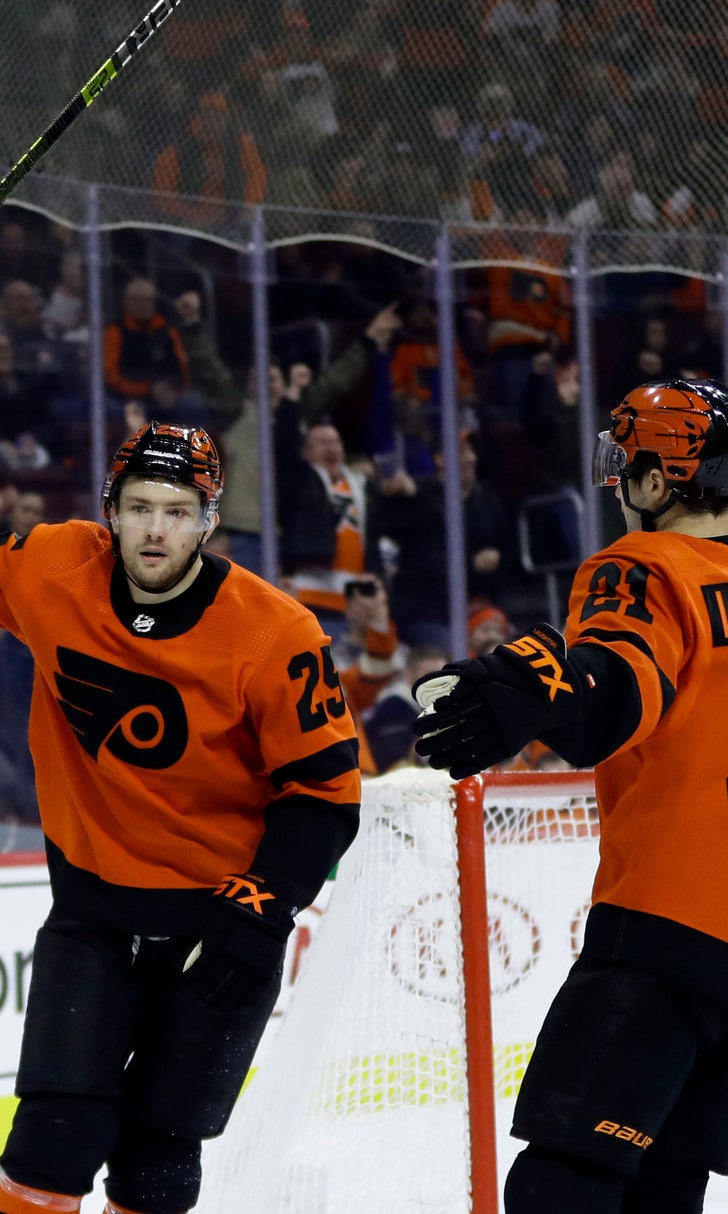 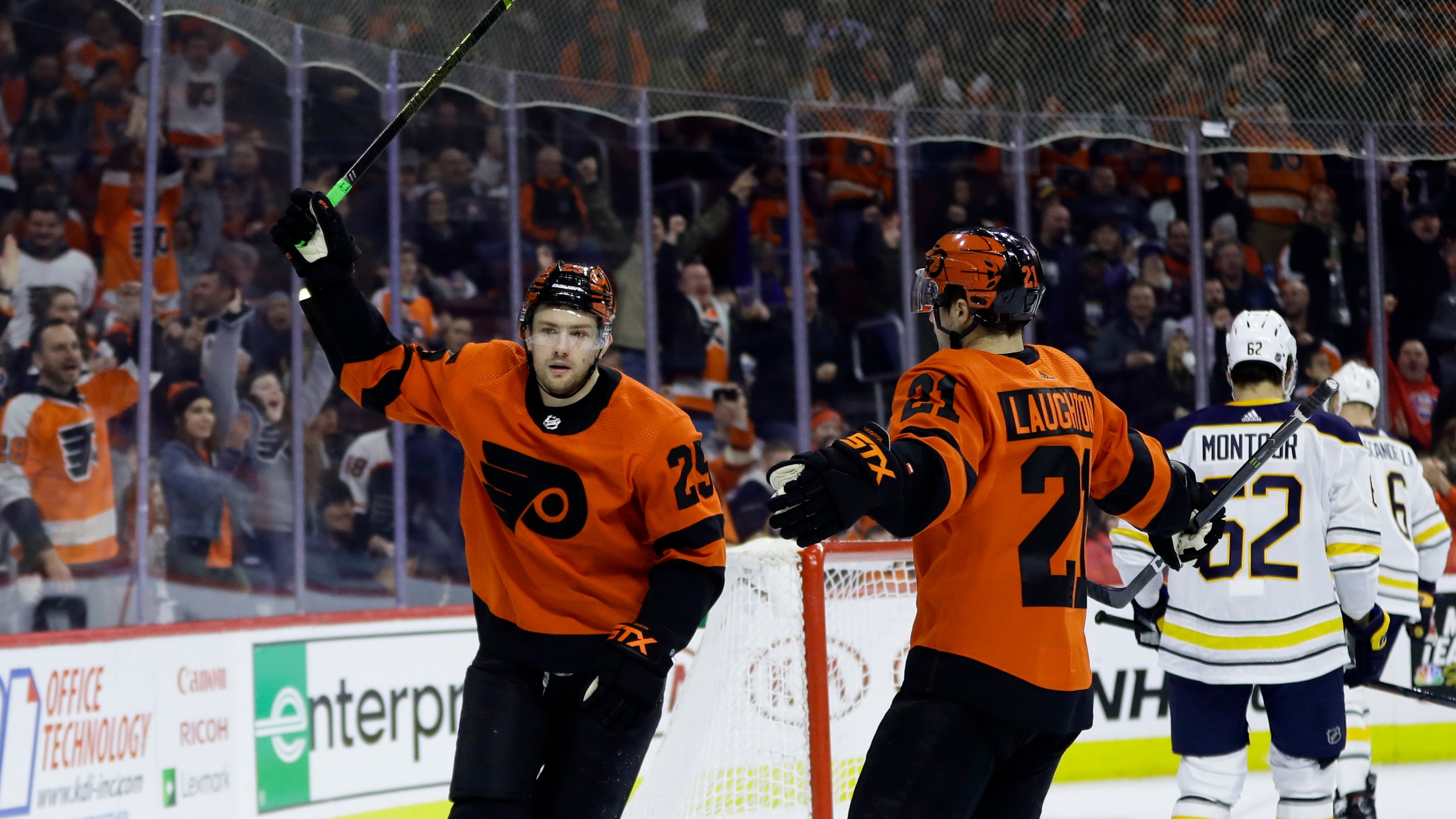 PHILADELPHIA (AP) — Ryan Hartman leveled Rasmus Dahlin on the open ice and wrestled Buffalo defenseman Zach Bogosian to the ground in a 20-second span that had the Philly crowd roaring and made the newest Flyer an instant fan favorite.

Hartman's first shift was a big hit — and a sign the Flyers still have some fight in their playoff push.

"It sounded like they loved it. I plan on bringing a lot more of that," Hartman said.

Jake Voracek, James van Riemsdyk and Claude Giroux each scored to keep the Flyers' tenuous postseason prospects alive in a 5-2 win over the Buffalo Sabres on Tuesday night.

Philadelphia's win capped an emotional 72 hours for the franchise — from the high of scoring three straight goals to beat Pittsburgh in overtime in the outdoor Stadium Series game on Saturday to the downer of trading former All-Star forward and fan favorite Wayne Simmonds at Monday's deadline.

Flyers fans waved white towels as a source of inspiration for a team that is 14-3-1 over the past 18 games more than a symbol of surrender for one that entered seven points out of the final Eastern Conference playoff spot. There are 19 games left and the Flyers can't afford many losses — and need teams ahead of them such as the Penguins, Carolina and Montreal to struggle down the stretch.

The new guy seems poised to help with the playoff push.

Hartman, a 6-foot forward, was acquired from Nashville in the Simmonds deal and quickly endeared himself to his new city. Oskar Lindblom scored just 2:48 into the game to get the Flyers rolling. Hartman then crushed Dahlin, the No. 1 draft pick, with a clean check and was quickly jumped by Bogosian. The scrap was broken up as the crowd roared for the latest fighting Flyer.

"That's kind of how I play, I've been able to do that throughout my career," Hartman said. "It's got me to this point, so no reason for stopping."

Giroux, who scored the OT winner against the Penguins, had an easier time getting his 19th goal, scoring an empty-netter late in the third.

Van Riemsdyk was impressed with Hartman, who will be a restricted free agent this summer. Nashville had hoped Hartman would be more productive after offseason shoulder surgery, only to see him manage just 10 goals and 20 points.

"He plays the game pretty hard, he's really a smart and skilled player, too," van Riemsdyk said. "Hopefully, we can build on that."

Jack Eichel scored his 22nd goal and Casey Mittelstadt had his ninth of the season for the Sabres, who were coming off a 5-3 loss Monday to Toronto.

Sabres defenseman Brandon Montour made his team debut after he was acquired in a trade with Anaheim. Buffalo remains in the playoff picture despite going 12-19-6 since a 10-game winning streak in November. The Sabres began the day in 10th place (66 points), but were passed by the Flyers (67 points) in the chase for the final Eastern Conference playoff spot.

"I think it's just disappointing because it's a game of mistakes, and right now we are making more mistakes than any team," Sabres coach Phil Housley said. "I still like the fight in our group, though. They're sticking together and fighting till the end, but we can't be chasing or trading chances with teams, that's not our game."

Brian Elliott was solid in net, stopping 34 shots to keep the Flyers afloat as they await the expected return of injured rookie goalie Carter Hart in another week.

NOTES: The parent company that owns the NFL's Buffalo Bills and NHL's Sabres announced the departures of Chief Operating Officer Bruce Popko, Chief Administrative Officer Brent Rossi and Executive Vice President Erica Muhleman. ... Buffalo completed the 12th of its 16th set of back-to-backs this season and fell to 5-5-2 in the second game. ... Flyers D Philippe Myers had an assist on Voracek's goal for his first career NHL point. ... Flyers had 45 shots on goal.

Sabres host the Penguins on Friday.