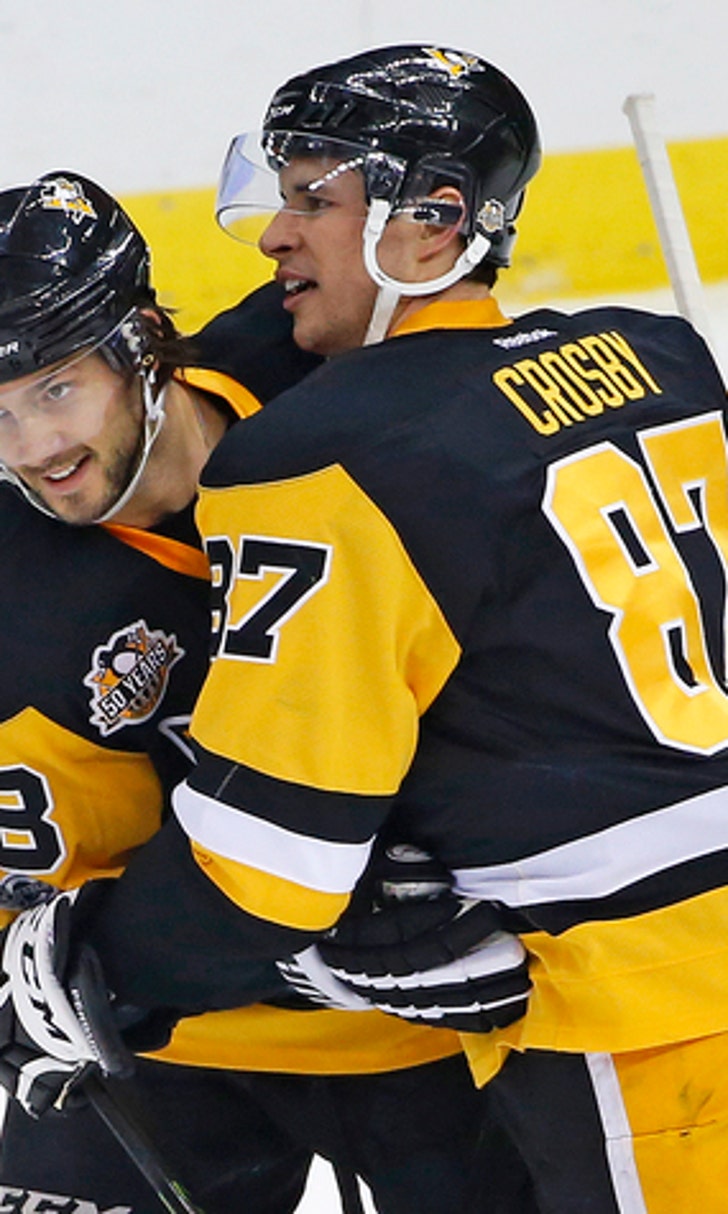 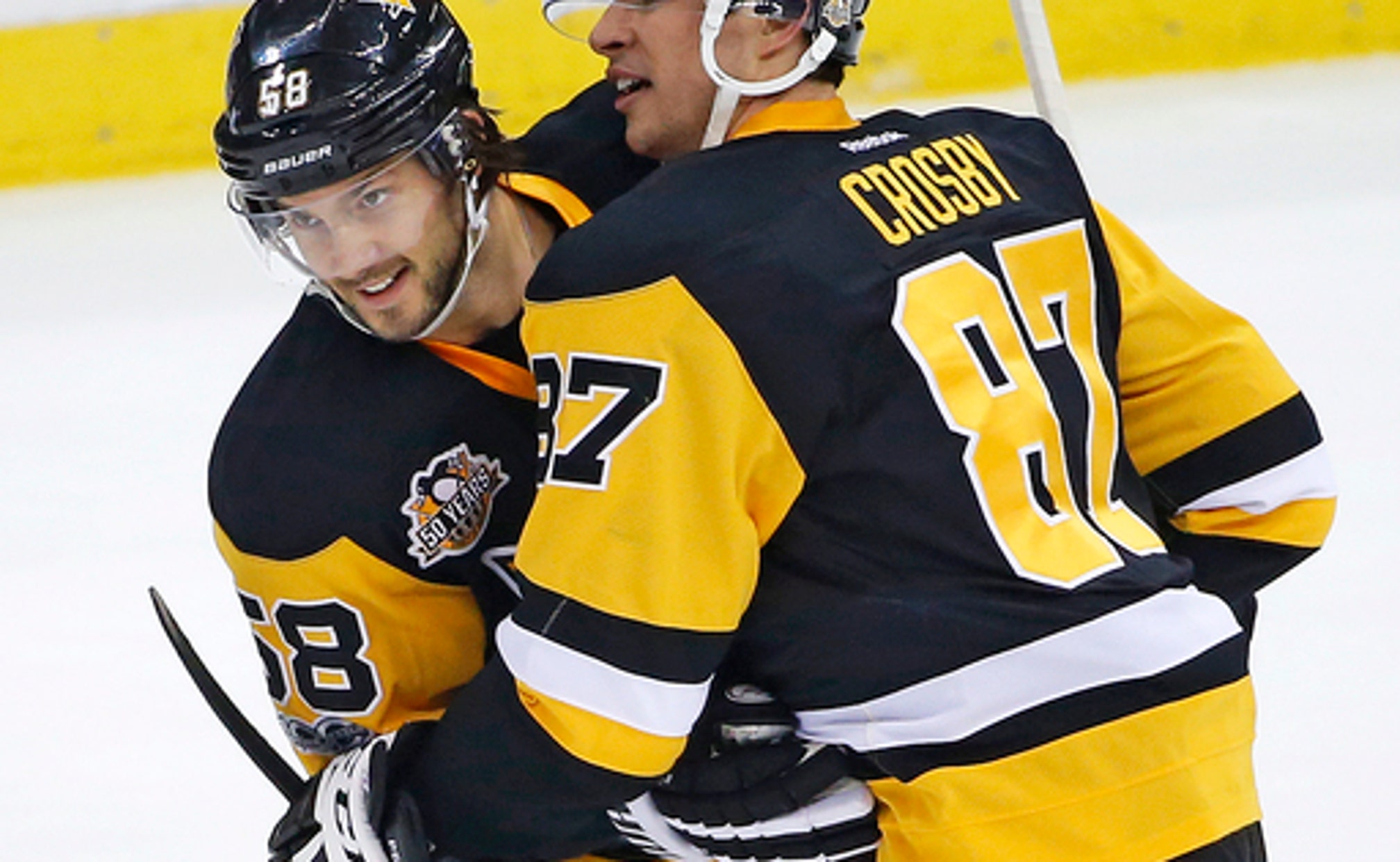 PITTSBURGH (AP) It was, in many ways, Sidney Crosby's remarkable career distilled to its essence. Game on the line. A wide-open net. A race to the puck. These are the moments the Pittsburgh Penguins star embraces as well as anyone in his sport.

Of course he beat Winnipeg's Mark Scheifele to the crease. Of course he poked the puck over the goal line with 21 seconds left in overtime to give the Penguins a 4-3 victory on Thursday night. Of course he provided the exclamation point on the same night he became the 86th player in league history to reach 1,000 career points.

''It's nice to win the game when you have a memorable night like this,'' Crosby said. ''You want to finish it the right way.''

Something Crosby has done again and again. The two-time MVP and Stanley Cup winner reached 1,000 points in 757 games. Only 11 players got there faster. None of them are playing anymore. Crosby is. Spectacularly.

Crosby finished with a goal and two assists to give him 1,002 in his career and 64 on the season, which also happens to be tops in the NHL. Same as it ever was for the 29-year-old who remains very much in the thick of his prime.

''The fact he scores the game winner is apropos, given he gets the 1,000th point in the game,'' Penguins coach Mike Sullivan said. ''I think the sky's the limit for Sid. I think he's that good of a player.''

One who got to 1,000 with an assist on Chris Kunitz's first-period goal, began the march to the next thousand when he helped set up Phil Kessel's game-tying goal in the third, and then capped it by getting to Evgeni Malkin's centering pass a half-step before Scheifele.

Malkin also scored for Pittsburgh, while Marc-Andre Fleury stopped 44 shots for the Penguins, who improved to 6-0-2 since the All-Star break.

Patrik Laine scored his 27th for Winnipeg. Paul Postma collected his first and Dustin Byfuglien his eighth for the Jets. Connor Hellebuyck made 35 saves, but couldn't get a handle on Crosby's 31st of the season and 369th goal of his career.

Crosby insisted as the milestone approached that he'd be happy once it was out of the way so the focus could swing back to Pittsburgh's chase of first-place Washington in the relentlessly competitive Metropolitan Division. His sprint to the mark turned into a slow jog during a rare two-game scoreless drought and inched closer with an assist in a victory over Vancouver on Tuesday to give him 999.

History came in typically symbolic fashion for one of the game's best playmakers.

Crosby reached it not with some breathtaking move, but by simply outworking an opponent. The Penguins were already up 1-0 on Malkin's goal 59 seconds into the game when Crosby beat Winnipeg's Blake Wheeler to a loose puck in the left circle. Crosby collected himself, then slipped a pass to Kunitz wide open in the spot. Kunitz powered it into the open net, the 186th time the longtime teammates have factored in a goal together.

''He's been able to use his body to create space and then to have the vision to be able pull the puck away from somebody and give me an open look for a pass that was right in my wheelhouse,'' Kunitz said. ''That's the way he battles.''

The 461st consecutive sellout at PPG Paints Arena - a streak that overlaps Crosby's rise to one of hockey's biggest stars - roared its approval when the red goal light came on. Officials stopped the game briefly while equipment manager Dana Heinze grabbed the keepsake puck, one that will go to Crosby's father Troy for safekeeping.

The celebration also served as a wakeup call to the Jets.

Winnipeg slowly turned the momentum by stretching the ice and getting the Penguins into the kind of up-and-down game that Pittsburgh coach Mike Sullivan wants his high-powered but only so-so defensive team to avoid.

Laine brought the Jets within one 17:10 into the second off a pretty cross-ice feed by Mathieu Perreault. Postma tied it 4:22 into the third with a slap shot from the point that beat Fleury. Byfuglien put Winnipeg in front with a wraparound that saw the puck duck in between Fleury's legs 8:24 into the third.

Kessel forced overtime when he beat Hellebuyck on the power play with 6:05 left in regulation, setting the stage for Crosby one more time.

NOTES: Primanti Bros., a Pittsburgh-based restaurant chain, released a sandwich in Crosby's honor on reaching 1,000 points. The sandwich, called ''The Captain,'' contains capicola, turkey and roast beef and is topped with cheese, coleslaw, tomato and french fries. ... Crosby is the third Penguin to score 1,000 points with the club, joining Mario Lemieux and Jaromir Jagr. ... Pittsburgh played the third period without defensemen Justin Schultz and Olli Maatta, who left with injuries and did not return. ... Winnipeg went 0 for 4 on the power play. The Penguins were 1 for 2.