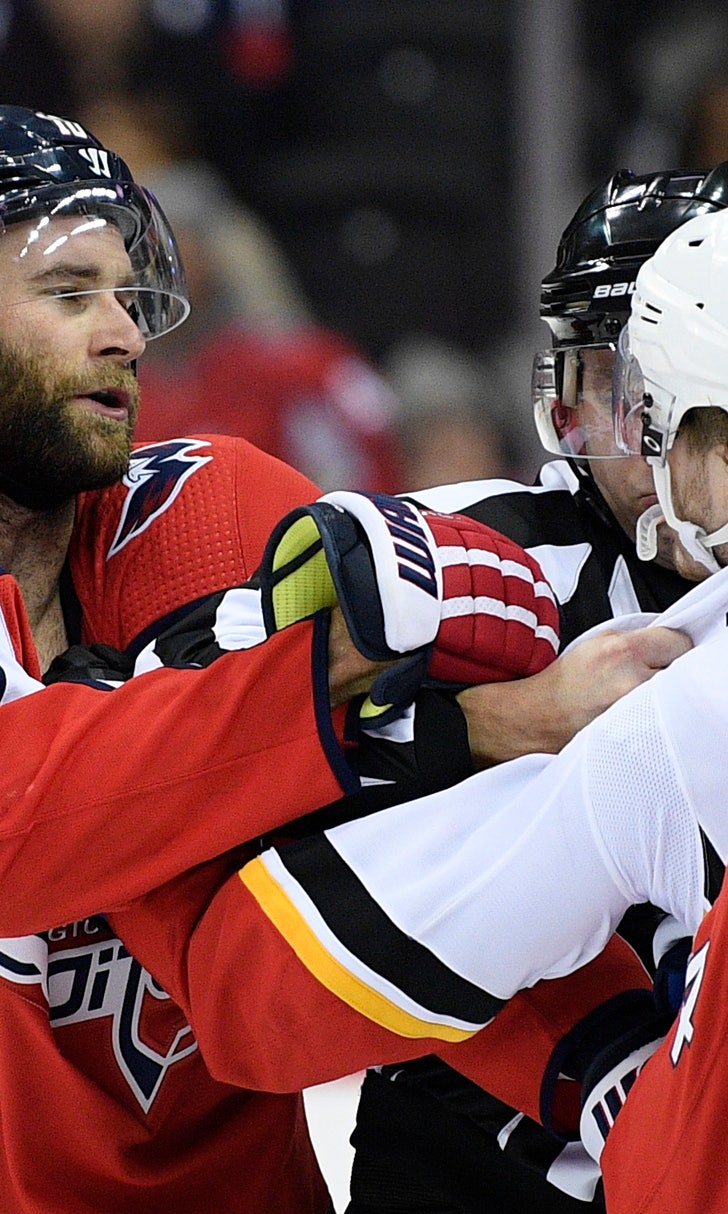 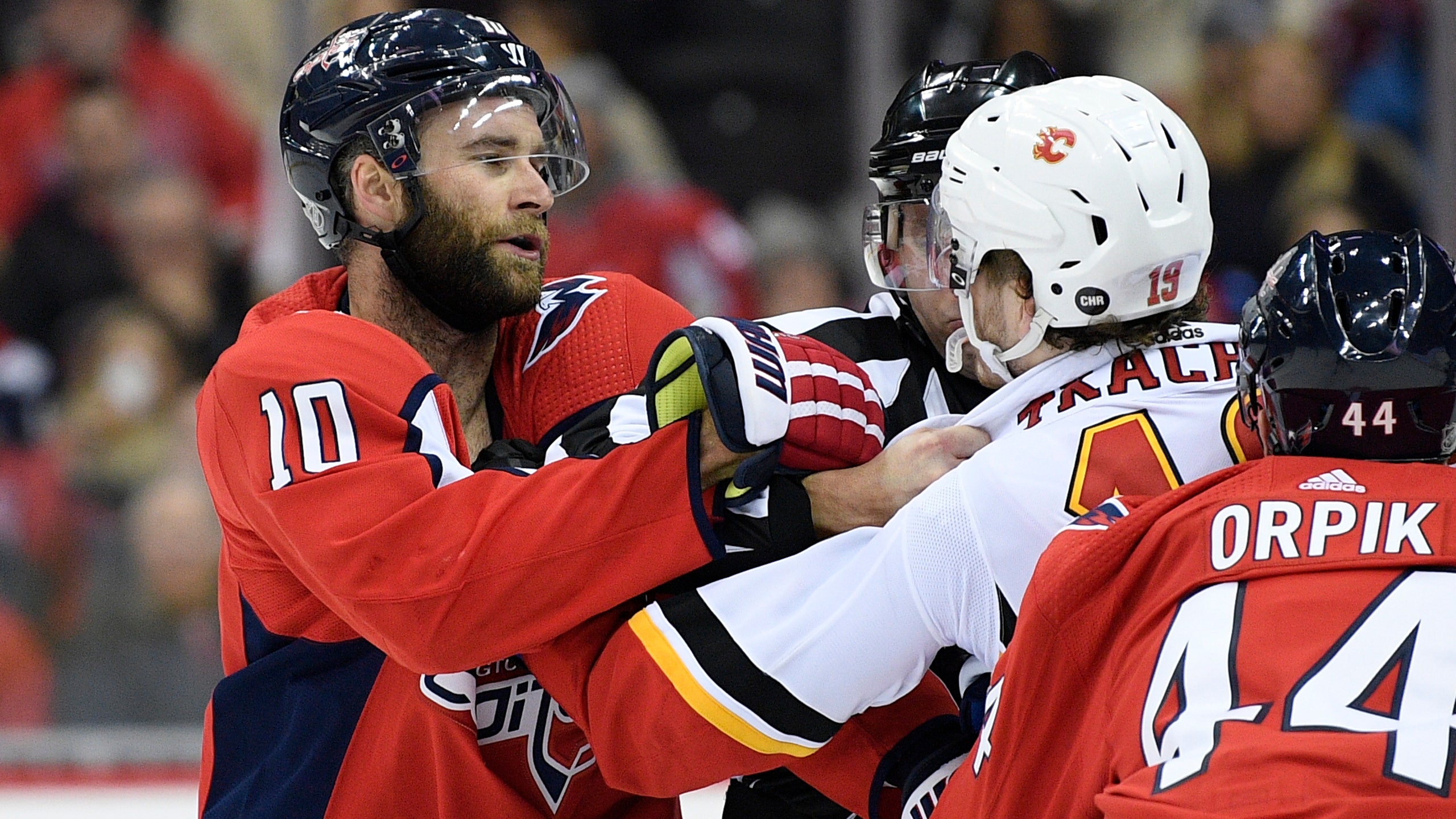 WASHINGTON (AP) — No one man can possibly replace Alex Ovechkin for the Washington Capitals. So, forced to play without their captain and leading scorer, the defending Stanley Cup champions used contributions from just about everyone to make up the difference.

Evgeny Kuznetsov scored a power-play goal with 57 seconds left, and Washington shook off the absence of its finest player to end a seven-game losing streak with a 4-3 victory over the Calgary Flames on Friday night.

Ovechkin, who leads the NHL with 37 goals, received a one-game suspension from the league for skipping the All-Star Game. He had played in 214 consecutive games, a streak that began in October 2016.

Facing the best team in the Western Conference, the Capitals also had to overcome a lower-body injury to center Lars Eller, who played only six minutes. Undaunted, Washington got goals from unheralded role players Nic Dowd and Dmitrij Jaskin, along with Tom Wilson, before Kuznetsov notched the game winner.

Without Ovechkin, the NHL's 10th-ranked power play unit was 0 for 3 until Kuznetsov connected.

"We knew that there was going to be an opportunity for some guys with Ovechkin out of the lineup," coach Todd Reirden said. "It was a big team effort from top to bottom."

With Calgary's Mikael Backlund off for holding, Kuznetsov weaved his way into the Flames' zone before firing a wrist shot past goaltender Mike Smith.

"I was just in a bad position to pass the puck," Kuznetsov said. "So I decided to shoot."

An instant after the final horn sounded, several players traded punches before finally skating off the ice.

"There was a lot of emotion on both sides. Two good teams that want to win," Wilson said. "We were playing hard right until the end there and it's loud. We were doing whatever it took to get the job done. That includes defending each other and sticking together at the end."

It was the first of six straight home games for the Capitals, who hope to get back on track after their longest losing streak since 2013-14 dropped them behind the Islanders in the Metropolitan Division.

"We're looking forward. We're not looking back," Wilson said. "That was a good team effort tonight. Pretty fun to go out that way at the end. Guys are happy."

Calgary trailed 3-2 before Elias Lindholm notched his 22nd goal of the season at 12:01 of the third period. Lindholm eluded Capitals defenseman Michal Kempny to get free in front of the net, where he deflected a shot by Johnny Gaudreau into the net.

Backlund and Garnet Hathaway also scored for the Flames, who came in with the second-best record in the NHL. It was Calgary's first defeat in regulation since Jan. 3, and it ended a run of nine straight games with at least one point.

"They were a little more desperate than us, a little hungrier early," coach Bill Peters said. "We got better as it went along."

Dowd opened the scoring with three minutes elapsed, deflecting a shot by John Carlson past the screened Smith.

Backlund tied it with at 17:37 of the first period, zig-zagging past defenseman Jonas Siegenthaler after two Capitals got tangled up in the neutral zone. Less than two minutes later, Jaskin tapped in a rebound for Washington.

Wilson made it 3-1 with a wrist shot from the top of the right circle in the opening minute of the second period, and Hathaway quickly answered for the Flames.

Smith finished with 36 saves, but it wasn't good enough.

"Anytime you lose a game with less than a minute left, it stings," he said. "It definitely hurts after coming back and making a game of it."

NOTES: Calgary D Travis Hamonic left with a lower-body injury. ... Carlson extended his point-scoring streak to four games and reached 40 assists in a second straight season for the first time in his career. ... Ovechkin will have to wait until Sunday for the opportunity to pass retired Sergei Fedorov as the highest scoring Russian-born player in NHL history. Both have 1,179 career points. ... Calgary has scored an NHL-best 81 goals in the third-period and remains plus-39 in the period. ... Washington was outscored 36-18 during its skid. The last time the Capitals lost eight in a row was in December 2010.

Flames: At Carolina on Sunday afternoon.