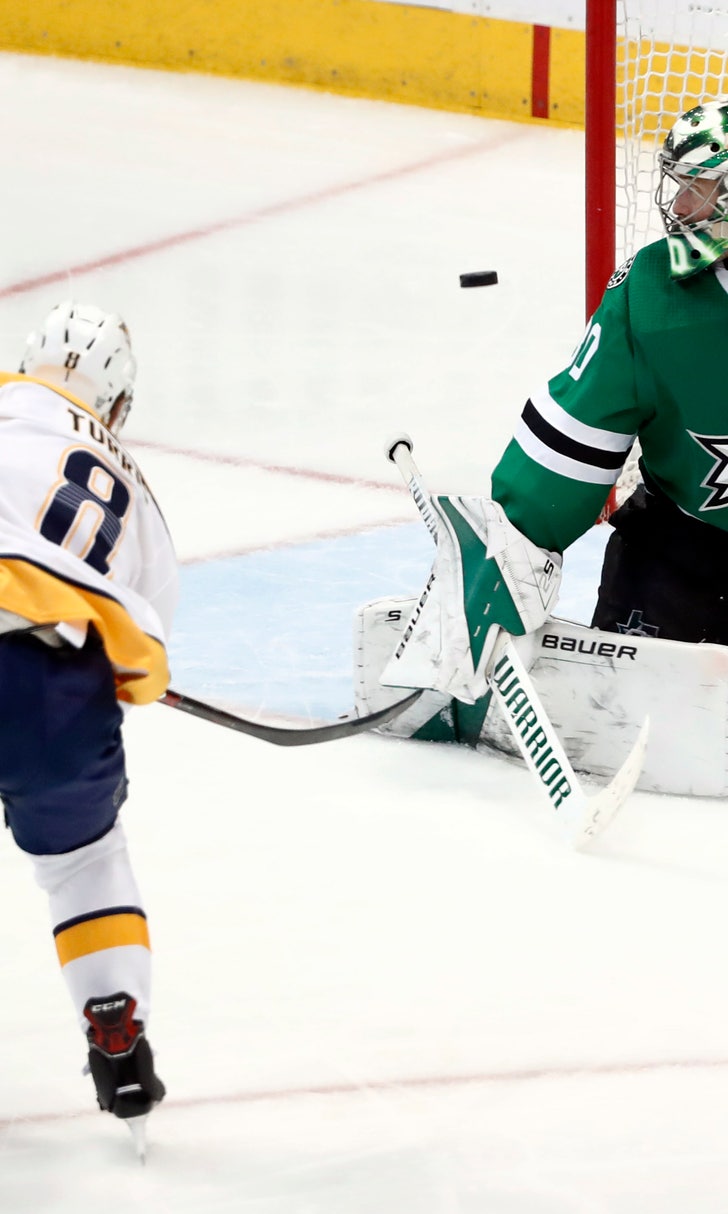 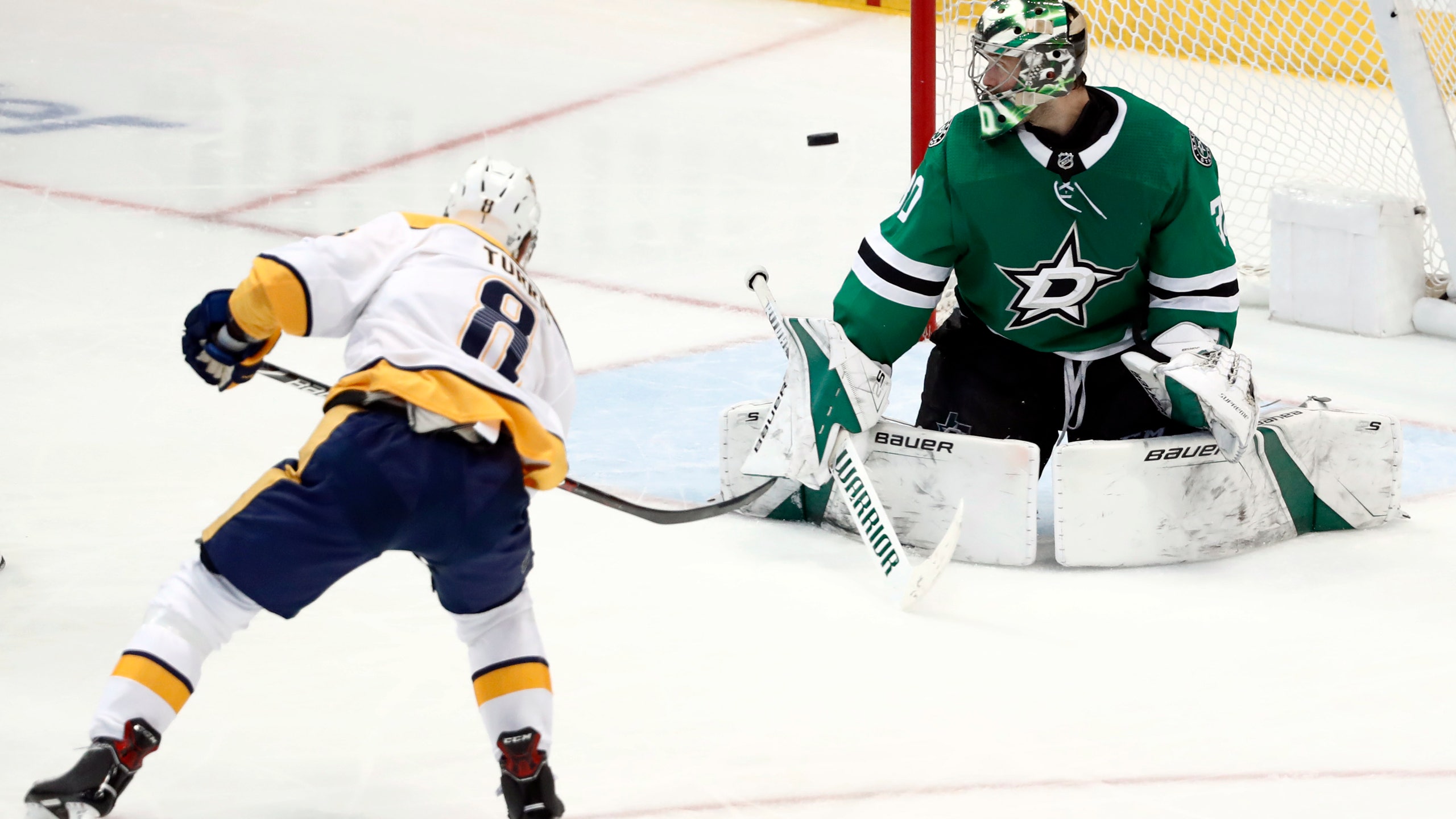 Ben Bishop grew up rooting for the St. Louis Blues before being drafted by them. He remembers being in the stands at 14 years old during a playoff series against the Stars and wholeheartedly taking part of the chants of "Bel-four!" directed at the Dallas goalie.

Now 18 years after that St. Louis sweep to get to the Western Conference finals, Bishop will be the Stars goalie going against the Blues in the playoffs.

"It's kind of funny to think that I'm playing for Dallas going back home," Bishop said. "Going to have a lot of conflicted friends and family. But once the game obviously starts, it's just hockey. ... It's a business trip."

The Central Division rivals, who both advanced after beating higher-seeded teams, open their best-of-seven, second round playoff series Thursday night in St. Louis.

Dallas advanced largely because of Bishop, who has been better in the playoffs (1.90 goals-against average, .945 save percentage) than he was in the regular season when he set franchise records with a 1.98 GAA and .934 save percentage. The Vezina Trophy finalist had a playoff career-high 47 saves when the Stars wrapped up their first-round series against Nashville in a 2-1 overtime win Monday night.

Bishop was a third-round draft pick by the Blues in 2005, and made his NHL debut for them three years later. He was traded to Ottawa in 2012, then a year later to Tampa Bay where he went to the Stanley Cup Final in 2015. The Lightning traded him to Los Angeles late in the 2016-17 season, and the 6-foot-7 goalie got dealt to the Stars that offseason and signed a six-year contract.

"He's a big goalie. He plays the puck well. It's obviously been a great season for him," Blues center Brayden Schenn said. "He's very capable of making a lot of key saves back there, but that's our job, to make life difficult on him whether it's throwing anything we can at the net or screens or tips."

The Blues have rookie Jordan Binnington in net. He had a 2.63 GAA and .908 save percentage in a six-game opening series win against Winnipeg that they wrapped up Saturday night at home.

Dallas, with rookie coach Jim Montgomery, won their last three games against Nashville. That came after Bishop's only real glitch against Nashville, allowing a couple of soft goals in Game 3 in his home playoff debut with Dallas.

Asked if he did anything to refocus after that 3-2 loss, Bishop responded: "Yeah, I thanked that blocker (pad) for all its work and got a new one."

As for the momentum of Game 6 carrying over, Bishop discounted that thought a bit.

"It's a whole new series, whole new, clean slate, right? Different team, different circumstances," he said. "You try to ride the highs obviously, but it's a new game."

St. Louis went from a league-worst 34 points on Jan. 2 to becoming the first team that was last in the NHL at the beginning of the calendar year to advance to the postseason.

The Blues had a franchise-record 11-game winning streak until a 5-2 loss at Dallas on Feb. 21, when the Stars scored four goals in a span of just more than 12 minutes against Binnington. Dallas added a 4-1 win at St. Louis on March 2.

"I'm more interested in what they did against Nashville than back then," Blues coach Craig Berube said.

"We had trouble with Winnipeg too," Schenn said. "We feel like the playoffs are a whole other story. You put that aside in the playoffs and you go out and play."

This is the fifth playoff series against the Blues for the Stars since moving to Dallas before the 1993-94 season. The Stars swept a first-round series their first season in Dallas, but the rest have been second-round matchups. Dallas won a six-game series against the Blues on way to winning its only Stanley Cup championship in 1999. There was that 2001 sweep by the Blues, who won a Game 7 in Dallas in their last postseason matchup three years ago.

Captain Jamie Benn, Tyler Seguin and Alexander Radulov, the top line for the Stars, each had six points in the first round against Nashville. Radulov had a team-high four goals, while Benn matched John Klingberg's five assists.

"That's a tough line to contain," Berube said. "They play like a power forward line. ... They go hard to the net and they're all decent skaters or above average skaters and good size with skill."

Seguin, with two goals and four assists this postseason, missed the 2016 playoff series because of Achilles and calf issues.

"Sitting up in the stands was not fun," Seguin said. "I'm looking forward to being on the ice this year."

Blues center Robby Fabbri had eight points in the seven-game series against Dallas as a 20-year-old rookie three years ago. He has since been limited by knee surgery and a shoulder injury, but was in the St. Louis lineup for the last three games against the Jets.

After four goals and plus-7 rating in the first round, Radulov had a maintenance day and wasn't on the ice for practice Wednesday. Montgomery initially joked that Radulov had a bad back.

"We don't know how long he's going to be because he told me he carried us to the second round," Montgomery, drawing laughter. "I told Rads I was gonna say that."