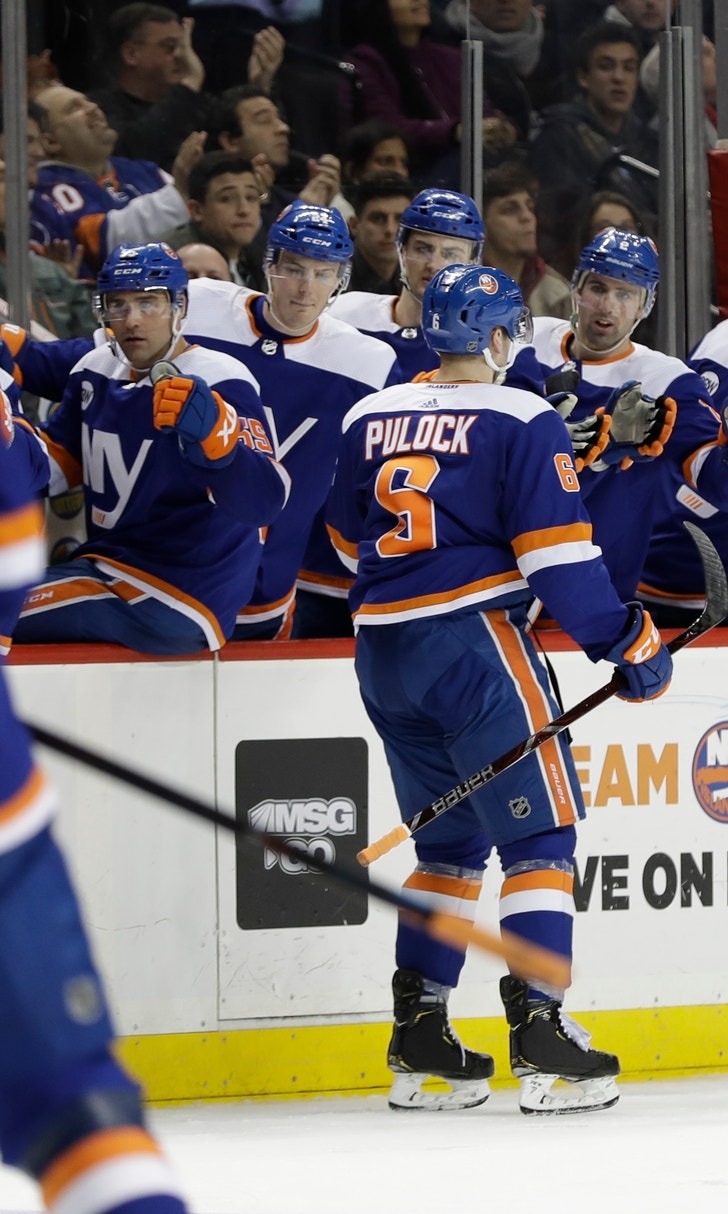 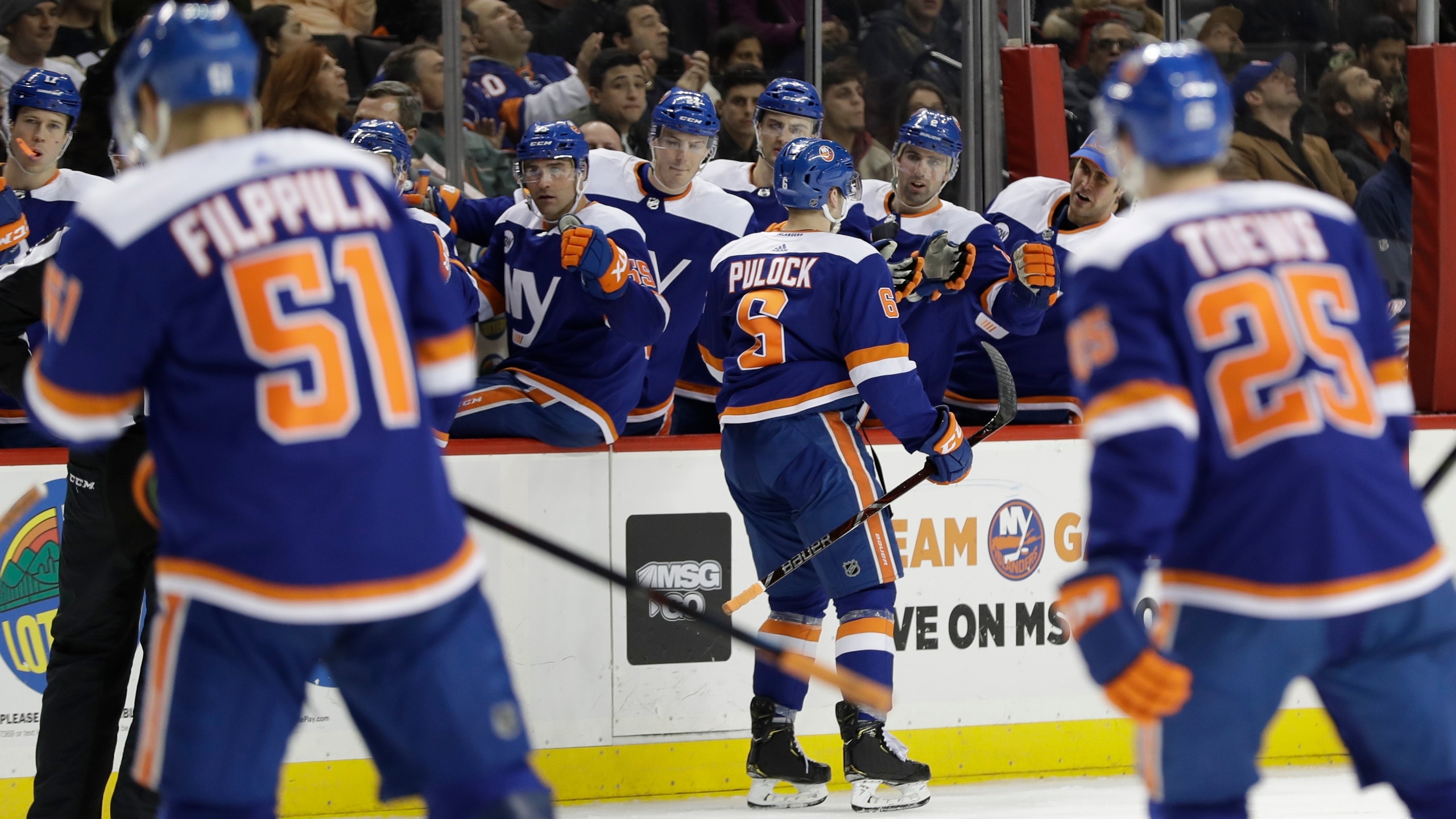 NEW YORK (AP) — Anders Lee energized the New York Islanders with a fight late in the second period, and then came through with a key goal late in the third after Edmonton pulled within one, helping his team get another win.

Mathew Barzal and Lee scored in the Islanders' three-goal third period, and they beat the Edmonton Oilers 5-2 Saturday night in the final game of the regular season at Barclays Center.

Ryan Pulock, Valtteri Filppula, and Brock Nelson also scored, and Devon Toews had two assists to help New York win for the fifth time in six games and improve to 21-5-2 in the last 28 games. Robin Lehner stopped 34 shots for his 18th win, moving to 14-3-1 since Dec. 18.

Lee got into a fight with Edmonton's Darnell Nurse with less than three minutes left in the second, and each player received a 2-minute minor and a 5-minute major for fighting. Nurse was also given a 10-minute misconduct.

"Just your typical battle," Lee said. "I took some cross-checks to the ribs, he took some from me and next thing you know our gloves are off. It's just hockey, stuff like that happens."

Islanders coach Barry Trotz liked what he saw from his captain.

"He wasn't backing down and that sort of pulled us in the fight a little bit," he said. "It's pretty nice when your leader is dropping the gloves and battling."

The Islanders moved to Brooklyn for the start of the 2015-16 season but have been splitting games between Barclays Center and their former home, the Nassau Coliseum, this season. New York's final 12 home games will be at the Coliseum. If the Islanders, who lead the Metropolitan Division by five points over Washington, make the playoffs, their home games in the first round will also be on Long Island, with potential future rounds back in Brooklyn.

The Islanders improved to 7-0-1 in their last eight at the two home arenas, and finished 12-6-2 at Barclays Center. The attendance was 14,812, the second-largest crowd of the season, trailing only the near-sellout for a game against the crosstown-rival Rangers here on Jan. 12.

"Any time our fans show up the way they have makes a huge difference for us and we feed off their energy," Lee said.

Ryan Nugent-Hopkins and Leon Draisaitl scored for the Oilers, who have lost 10 of their last 11 (1-8-2). Mikko Koskinen finished with 19 saves while starting for the second straight night after Cam Talbot was traded to Philadelphia for Anthony Stolarz following the Oilers' 3-1 loss at Carolina on Friday.

Barzal pushed the Islanders' lead to 3-1 at 5:09 of the third as he tipped Toews' slap shot through traffic for his 17th.

Draisaitl pulled the Oilers back within one with a slap shot from the right circle off a pass from Connor McDavid at 9:40. It was Draisaitl's 35th of the season and 11th in the last 10 games.

Lee sealed the win with his first goal in 12 games as he scored from the right side with 2:16 left for his 19th off a pass from Leo Komarov. Nelson added an empty-net goal 32 seconds later for his 18th.

"I'm really proud of our effort," said Oilers coach Ken Hitchcock, who is 15-19-4 since replacing the fired Todd McLellan on Nov. 20. "We did a lot of good turns. We were coming on strong, on the power play (down) 3-2, but 30 seconds after the power play, we get scored on."

New York got its 35th win in its 59th game, matching its total from last season when the Islanders finished 35-37-10.

After a scoreless first period, Pulock gave the Islanders a 1-0 lead with a one-timer from the left circle, beating Koskinen on a power play over his left shoulder for his sixth at 3:02 of the second. It was Pulock's third goal in five games.

Filppula made it 2-0 as he deflected Nick Leddy's shot from the left point up high over Koskinen's glove for his 12th with 6½ minutes left in the period.

Nugent-Hopkins pulled the Oilers within one as he deflected Kris Russell's shot past Lehner for his 18th with 2.3 seconds to go in the second.

NOTES: McDavid, who had an eight-game point streak snapped on Friday night, now has 11 assists and 13 points in his last 10 games. ... The teams conclude the season series on Thursday at Edmonton. The Oilers won both meetings last season, 2-1 in OT in Brooklyn and 2-1 in a shootout at home. ... Islanders moved F Andrew Ladd and D Thomas Hickey on long-term IR on Saturday and loaned them to Bridgeport of the AHL on a conditioning assignment as they work their way back from injuries. Both were expected to play in the Sound Tigers' two games this weekend. Ladd has been out since Nov. 15 with a leg injury, and Hickey since Dec. 18 with an upper body injury. ... Pulock has three goals and five assists in his last eight games.

Islanders: At Calgary on Wednesday night to open a three-game trip to western Canada.