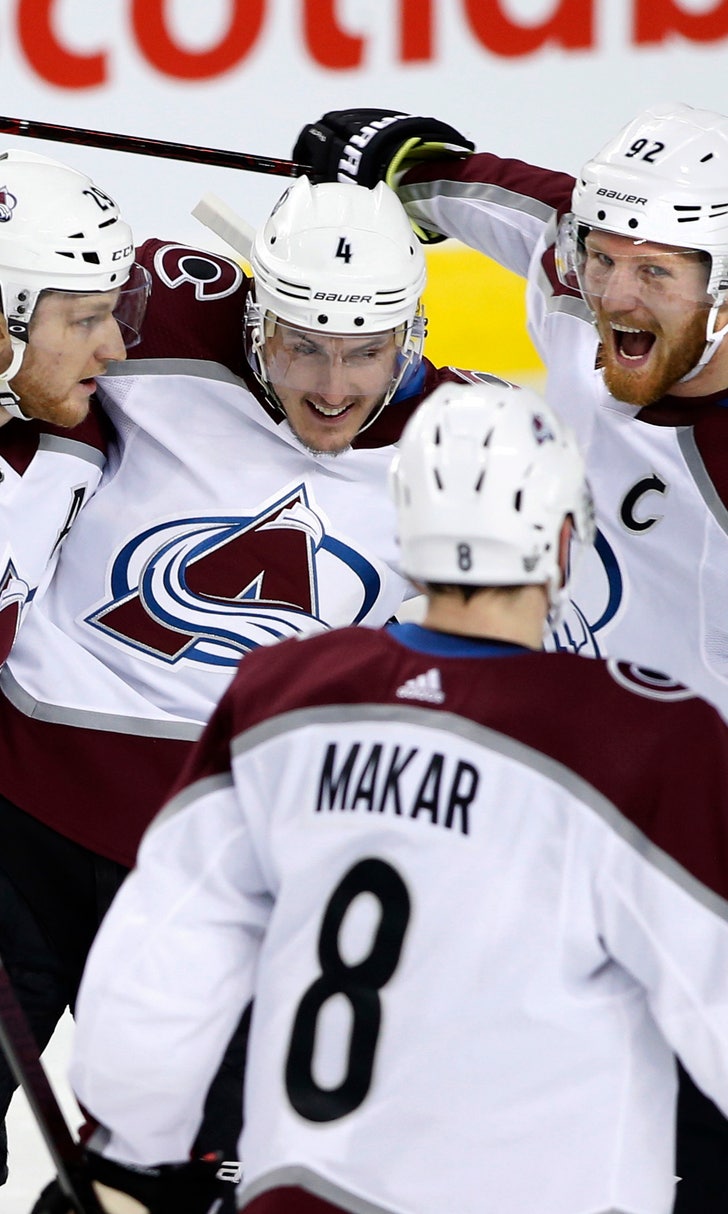 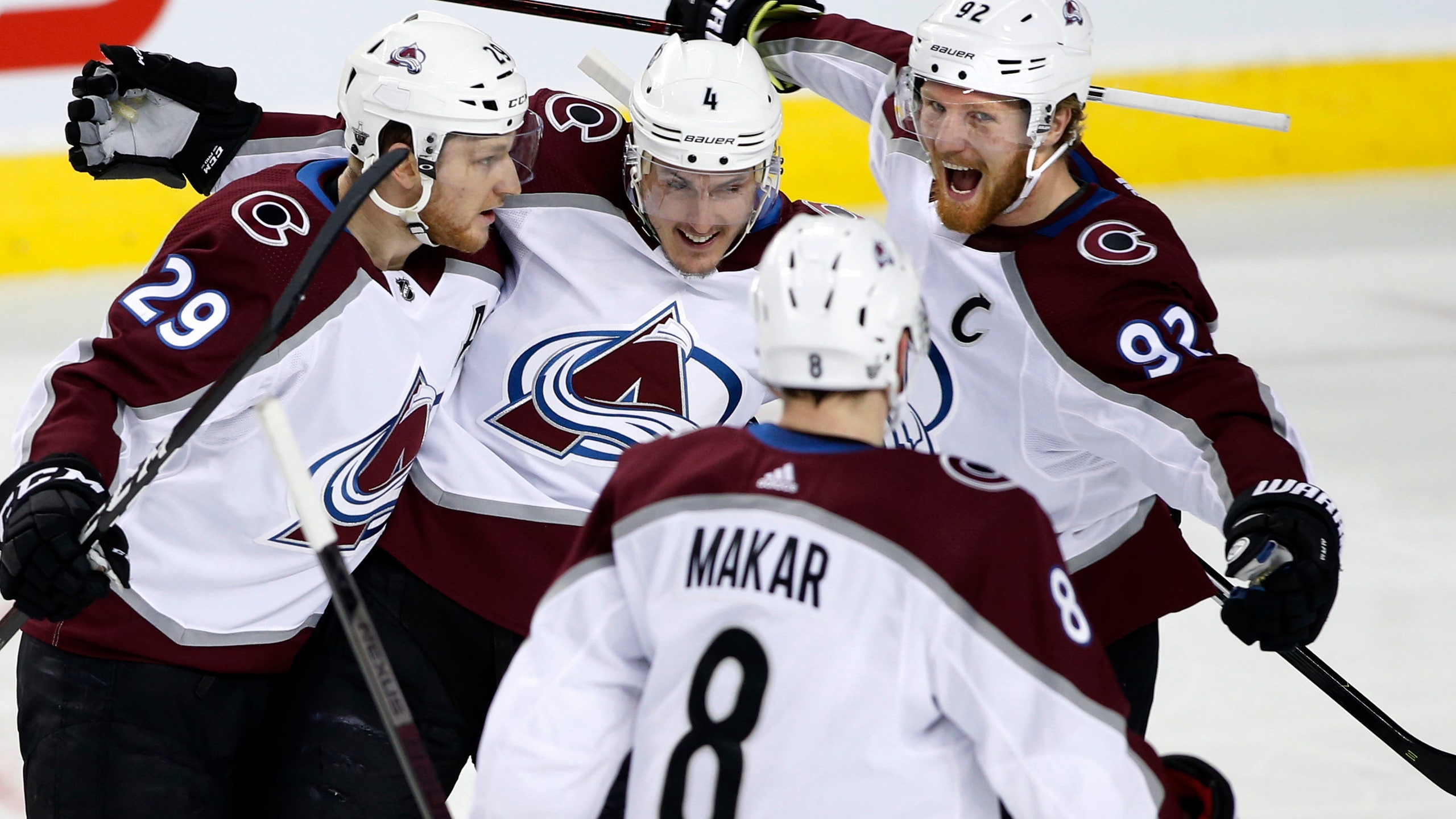 Avalanche moving on in playoffs for 1st time since 2008

DENVER (AP) — The brief message on social media from Colorado defenseman Nikita Zadorov was rhetorical in nature: "How is your bracket ?"

Because obviously, it's pretty messy.

The eighth-seeded Avalanche certainly played a big role in that. Colorado knocked off the Calgary Flames — the top team in the West — in five games for its first playoff series win since 2008. It's on to the second round, where Colorado faces the winner of the Vegas-San Jose series. The Golden Knights lead the Sharks 3-2.

While others may be surprised, Nathan MacKinnon and his teammates have been asserting that this postseason would be entirely different. This time, unlike a year ago, they wouldn't be content with merely making the playoffs. This time, they wanted to make some noise even if they again entered as an eight seed and faced a No. 1 seed.

"We're not just happy to be here," said MacKinnon, whose team was eliminated in the opening round by top-seeded Nashville in six games last year. "We're here to win the Cup."

Colorado actually has been in playoff mode for about a month, needing to go 8-0-2 down the stretch to earn the last spot. Despite the Avalanche's surge, they weren't exactly a trendy pick to spring an upset on a Flames squad that amassed 107 points. But they outscored the Flames by a 17-11 margin and outshot them 205-164.

"Now we can rest before the second round," forward Mikko Rantanen said Friday after a 5-1 win in Game 5. "That's going to be huge."

And just like that, another top seed exited. Tampa Bay, the Presidents' Trophy winner with the league's best record, got swept out of the playoffs by Columbus.

Dating to expansion in 1967-68, this marks the first time the top two teams in each division or conference or the teams with the two best records have been eliminated in the opening round, according to the league.

"We told you going into the playoffs that we had a different feeling, a different mindset this year, that we're here for a purpose," Avalanche coach Jared Bednar said. "Our guys believe it ... Our guys are hungry for more."

Rantanen turned in quite a series, with five goals and four assists. He has at least a point in four straight games, which is one away from tying the Colorado/Quebec franchise mark held set by Peter Stastny in 1982 and equaled by Peter Forsberg on three separate occasions.

This after Rantanen missed the last eight games of the regular season with an upper-body injury. He shook off some rust in Game 1 and then spent the rest of the series shaking free of defenders. He scored the overtime winner in Game 4.

"He came back and he looked amazing and dominated," MacKinnon said. "It's so nice to have a guy like that on your team."

The same can be said for goaltender Philipp Grubauer, whose play down the stretch got the Avalanche into the postseason and whose play now has kept them rolling. Grubauer posted a 1.90 goals-against average against the Flames.

"He was a wall for us," said captain Gabriel Landeskog, whose team went 0-3 against San Jose during the regular season and 2-1 versus Vegas. "He was really important for us. He's been really solid this whole series."

Grubauer believes this team can reach an even higher level.

"If we can manage to play that way for a long time, we're going to set ourselves up for a good chance here," said Grubauer, who won a Stanley Cup title with Washington last season. "Guys are stepping up in the right moments."

Like recently signed rookie defenseman Cale Makar , who made his NHL debut in Game 3 and scored a goal. The 20-year-old signed a three-year deal with Colorado last Sunday, a day after his college season ended when Massachusetts lost in the Frozen Four championship game.

Makar, who is from Calgary, grew up a big Flames fan. He just played a role in eliminating them.

Matt Nieto had two short-handed goals in the series, while Tyson Barrie added five assists and logged the most ice time among Colorado skaters.

In the clincher at Calgary, Rantanen, Colin Wilson, MacKinnon and Barrie all had at least three-point performances. This marked the first time in the team's history that four players had at least three points in a series-clinching game.

That comes as no surprise to Landeskog.

"We wouldn't be here," Landeskog said, "if it wasn't for every single guy in this room."