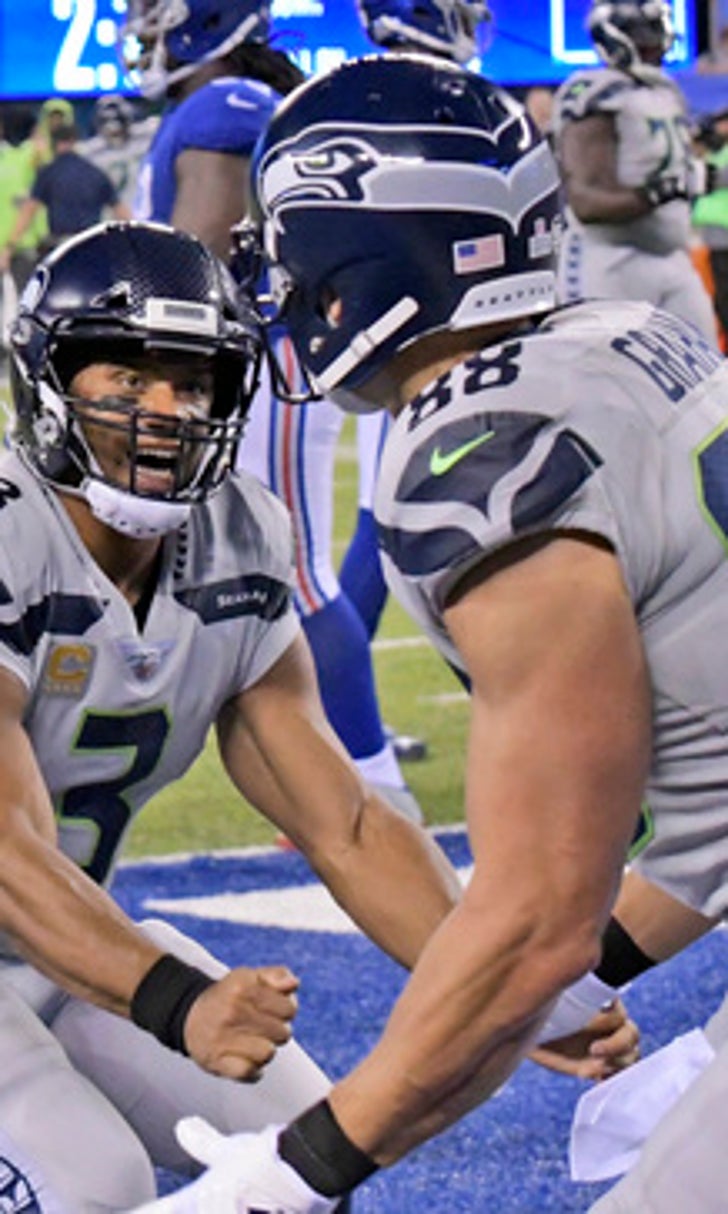 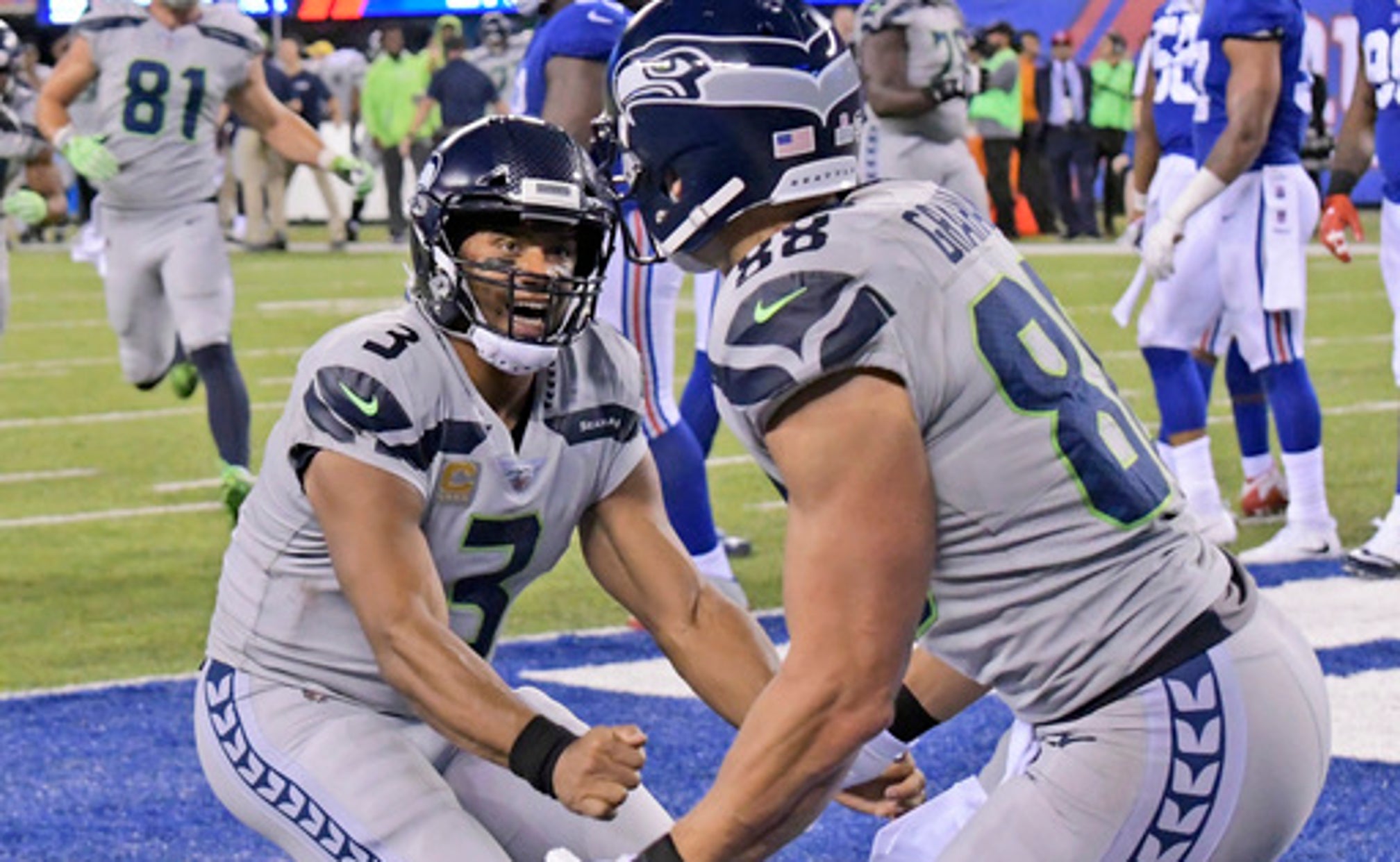 EAST RUTHERFORD, N.J. (AP) The way Seattle was moving the ball on offense and how its defense was dominating the banged-up New York Giants, Russell Wilson knew it would just be a matter of time before the Seahawks found a way to win.

It was just a matter of being patient. It paid off.

Wilson threw three second-half touchdown passes and the Seahawks limited the Giants' receiver-depleted offense to season-low 177 yards in a 24-7 win on Sunday.

Wilson hit Doug Baldwin with a go-ahead 22-yard touchdown pass midway through the third quarter. He put the game away with a 38-yard TD throw to Paul Richardson on a play that had to be reviewed because of simultaneous possession and he closed out the scoring with a 1-yard toss to Jimmy Graham with 2:14 to go.

The Seahawks (4-2) limited the Giants (1-6) to 46 yards rushing, 14 first downs and just 24:34 in time of possession. The defense only forced one turnover, but the fumble by Eli Manning led to the Richardson touchdown.

The points came in the second half and once Seattle was ahead it was unlikely that the Giants would find a way to rally against its defense.

''We came out here to win a ballgame and play some good football,'' Seahawks coach Pete Carroll said. ''It took us a while to put it all together. Really liked the way our guys hung together when we were kicking ourselves around in the first half. The belief in both sides of the ball was solid. We knew we were going to turn this thing.''

The Giants, who stunned Denver on Sunday night for their first win, were only in this game because their defense made plays and limited the Seattle to a field goal in the first half despite being on the field for more than 20 minutes.

The unit set up the Giants' touchdown with a forced fumble and a 32-yard return by Landon Collins to the Seahawks 17. It set up a 5-yard TD toss to Evan Engram , the only receiver who could get open on a consistent basis.

Blair Walsh had kicked a 39-yard field goal late in the first half to get the Seahawks within 7-3.

Seattle took the lead with a four-play 59-yard drive that featured passes of 29 yards to Graham and 23 yards to Richardson by Wilson, who was 27 of 39 for 334 yards.

The Giants had a chance to tie the game early in the fourth quarter but a 47-yard field goal by Aldrick Rosas was wide right.

Seattle was forced to put on its next series but they got the ball back quickly when Jarran Reed sacked Manning and forced a fumble that Frank Clark recovered at the Giants 37.

On the first play, Wilson pitched the ball to J.D. McKissic and took a return lateral. He tossed a pass to the left corner of the end zone and Richardson and Collins made a simultaneous catch. It was ruled a touchdown and the review didn't change it.

''What an exciting play,'' Wilson said. ''It was a great call by (Darrell) Bevell. I tossed it to J.D. and he throws it back to me. I just let Paul do his thing, one on one.

Referee Tony Corrente said the play was over once the players touched the ground with simultaneous possession.

''So at that point when they were on the ground together, and they're tussling to begin with, the catch is over,'' Corrente told a pool reporter. ''That's the touchdown.''

Graham, who had dropped a touchdown pass on the first play of the second quarter, caught one late.

Despite being outgained 222-42 and having the ball just over nine minutes, the Giants led 7-3 at the half.

''The defense played their tails off today,'' said Giants running back Orleans Darkwa, who led the team with 35 yards rushing. ''As an offense we have to put points on the board, simple and plain. With the bye week coming up we have to figure out what we do well and what we do bad an improve from there.''

What You Need To Know To Win $100,000
NFL fans have a chance to win big absolutely for free this week. Jason McIntyre navigates a landscape full of backup QBs.
1 day ago

The Path of Least Consistence
For the NFC East, wins haven't been aplenty. However, intrigue has been in never-ending supply.
2 days ago