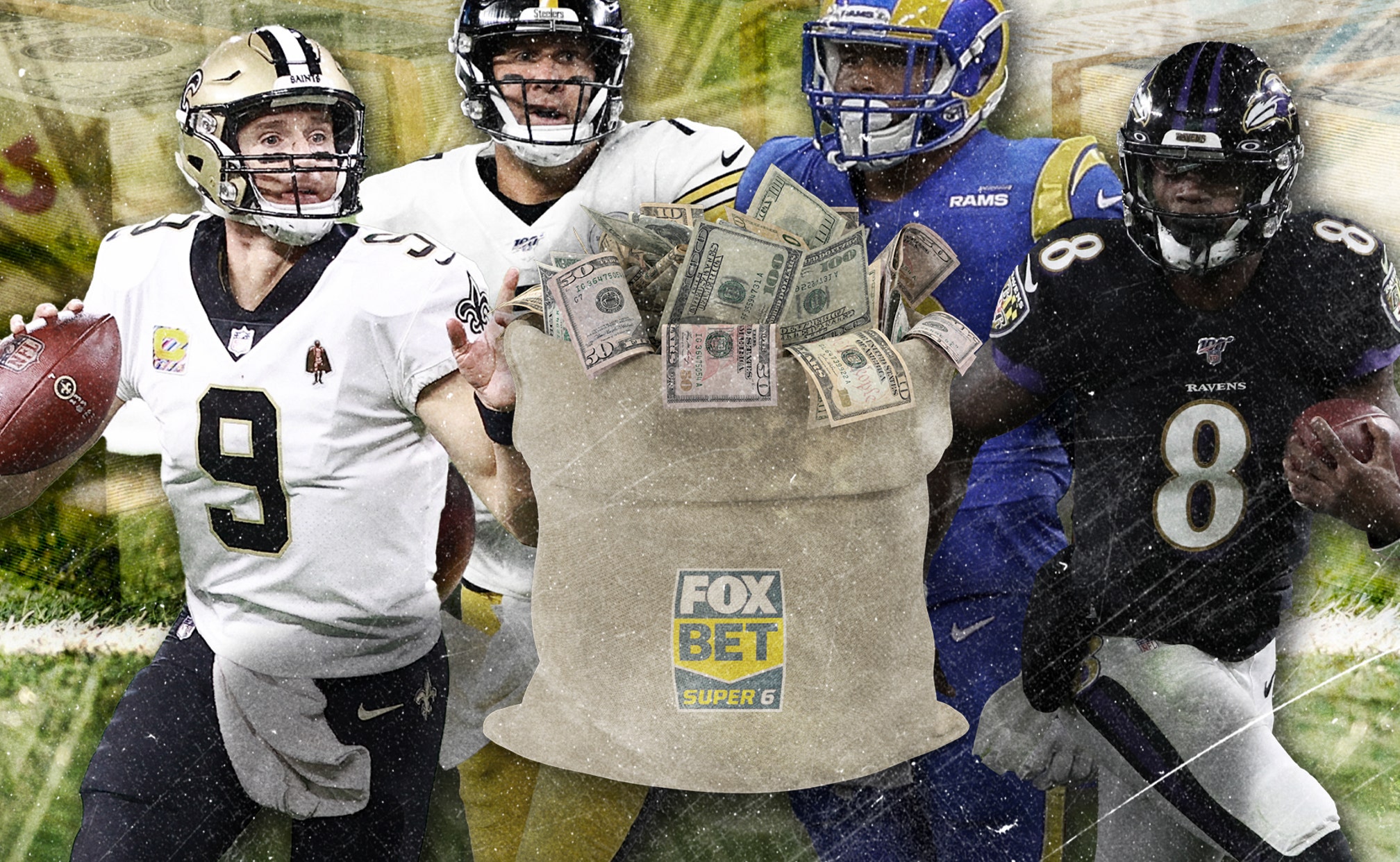 This week's NFL Super 6 contest features the game of the week (Steelers at Ravens), and two road favorites (Rams, Saints). But more importantly, it offers you a chance to win $1 million – yes, you read that right – absolutely free.

So as we head toward all the picks and action of Week 7, here's how I'm handicapping these six games both against the spread and in the Super 6 contest (with all odds via FOX Bet).

Everyone watched the Rams dismantle an offensively inept Bears team on Monday Night football and the public will be backing them. But there are sneaky reasons to like the Dolphins.

This is the Rams' fourth cross-country trip this season, and it’ll be the first game they’ve played in front of fans this season. Miami only blitzed 31 percent of the time last year; it’s up to 38 percent this year because CBs Byron Jones and Xavien Howard (tied for NFL lead in interceptions) are healthy and playing at a high level.

Tua is the great unknown. If his opening drive – having had two weeks to prepare – doesn’t result in points, it could be a long afternoon. Also, the Dolphins rank dead last in run defense, and there’s a chance the No. 1 ranked Rams run game rolls over an overmatched front seven. Rams by 1-3 points.

It’ll be easy for the Packers to overlook this game, having fully rebounded from the Bucs loss with a convincing beatdown of the terrible Texans and having defeated the Vikings handily in the opener.

Why? The Packers have throttled Kirk Cousins in three straight games (8 sacks, 4 interceptions). Mike Zimmer’s seat is lukewarm, and Minnesota just traded its best defensive player. Oh, and the Packers have a massive rematch with the 49ers next week; every Packers player knows they were outscored 74-28 in two blowouts at the hands of Kyle Shanahan in 2019.

Zimmer hasn’t been great off a bye (2-5 ATS), but this is a sleepy spot for the Packers. The problem is that if you can’t get to Aaron Rodgers, you don’t have much of a chance. The Bucs sacked him four times; the Vikings have just 13 sacks this year, and five of them walked out the door with the Ngakoue trade. Packers by 4-6 points.

The book on Baker Mayfield is a short one – pressure him, blitz him, force him out of the pocket, where his accuracy plunges. The Steelers and Ravens do both exceedingly well, and both creamed the Browns.

The Raiders are 28th in blitz percentage and 26th in QB hurries. Furthermore, Las Vegas coming off a bye week only hit Tom Brady once and didn’t sack him. But the Raiders will score on Cleveland, too – the Browns have only kept one team under 23 points, and that was Washington, which scored 20 despite five turnovers.

The line has cratered, opening at Ravens -5.5. A question I’ve heard nobody asking: How good are the Ravens? Their best win is against a 5-2 Browns team that remains suspect. The combined record of the other four teams they beat is 6-20-1.

There’s some pressure on Lamar Jackson here, given his poor showing against the Chiefs and in the first half of the playoff loss to Tennessee. Expect Baltimore to exploit the loss of Pittsburgh linebacker Devin Bush with tight ends Mark Andrews and Nick Boyle. The Titans were unable to do that, with the Steelers limiting their TEs to three catches for 16 yards.

Steelers coach Mike Tomlin is 22-10 on the road against teams with a record above .500. Ben Roethlisberger has yet to face a top 15 defense this season; the Ravens rank 3rd. Take the under and the points. Ravens by 1-3 points.

Toughest game this week for many reasons, but I can’t get past this one: The Bills would love nothing more than to take out two decades of frustration on the best dynasty in NFL history. The Patriots are in disarray, have lost three straight, and they don’t have the offense to keep up with Buffalo.

So does Bill Belichick run the ball 50 times against the 26th rated run defense, control the ball for 40 minutes and try to steal a win? That’s the only path to victory for the Patriots, who are 28th in net yards per play (-0.5), even with the Giants and Washington.

Josh Allen has regressed after a hot start, but he leads the NFL in completions and TD pass from play-action, where Jimmy Garoppolo exploited the Patriots (13-of-14, 146 yards) last week. Bills by 7-9 points.

The Saints are off another non-cover against an inferior opponent (Panthers), and New Orleans is just 2-4 against the spread this season. The Saints don’t pass the eye test, but they are the only NFL team that ranks in the top 10 in offense (seventh), defense (10th) and special teams (seventh), according to Football Outsiders.

This will be their first non-dome game this season, and the inclination will be to fade them outdoors where temperatures are expected to be in the 40s. Bad move. The Saints game plan will be simple – large doses of Alvin Kamara and Latavius Murray, the same way Rams RBs averaged 4.8 yards per carry vs. Chicago and the Bucs' Ronald Jones averaged 6.2.

The Bears must find offense besides Allen Robinson, who had 10 catches on 16 targets last year vs the Saints in a double digit loss. Saints by 7-9 points.