Why Deflategate was about money and control, not air pressure

Tom Brady might be the most recognizable player in the NFL, but he is not immortal. He's 38 years old, and he plays a game designed to destroy the body that's executed by some of the most powerful athletes in the world.

Brady's career will come to an end eventually. No crazy diet or 4:30 a.m. exercise plan is going to allow him to play football in the next decade — try as he might.

Roger Goodell is also not immortal, but he has a much longer shelf life than Brady, as the leader of the 32-clan, $13 billion behemoth that is the NFL.

Yet, for the past year, it was fairly wondered which man would leave the league first.

On Friday, Brady dropped his challenge of the league's four-game suspension and confirmed that Goodell will be around a lot longer than him in the process. 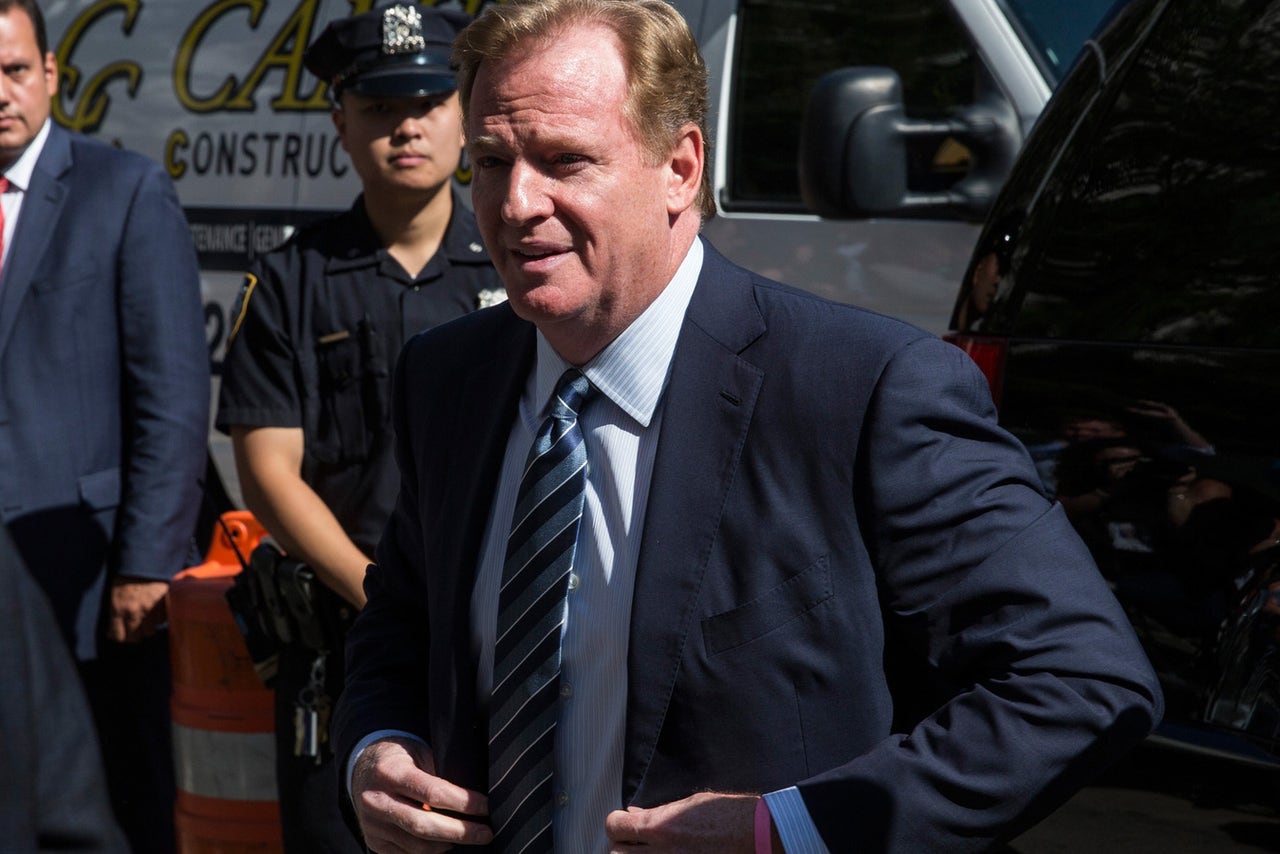 Deflategate, as it was so lamely labeled, had little to do with Ideal Gas Law, or competitive balance, or ipso facto logic. It doesn't matter if Brady actually ordered the balls to be deflated, or if there were ballboys acting on a wink-nod understanding, or if a member of the New England equipment staff went "lone wolf" and did it without anyone else's knowledge, or if the balls were intentionally deflated at all.

The science — which overwhelmingly backs Brady, almost to a comical standpoint — was never truly in play.

No, this was a power struggle that was decades in the making and had a lot more than a four-game suspension riding on it.

This was about control, and Goodell won.

The NFL is the most lucrative sports league in the world, and it's not even close. The NFL brings in as much money than Europe's four most lucrative soccer leagues — the Premier League, Bundesliga, La Liga, Serie A — combined. The NBA brings in less than half the money the NFL does, so no league is going to catch them, especially with Goodell's plan to get the league to $25 billion in revenue by 2027.

That's a timeline Goodell intends to see through at the helm. 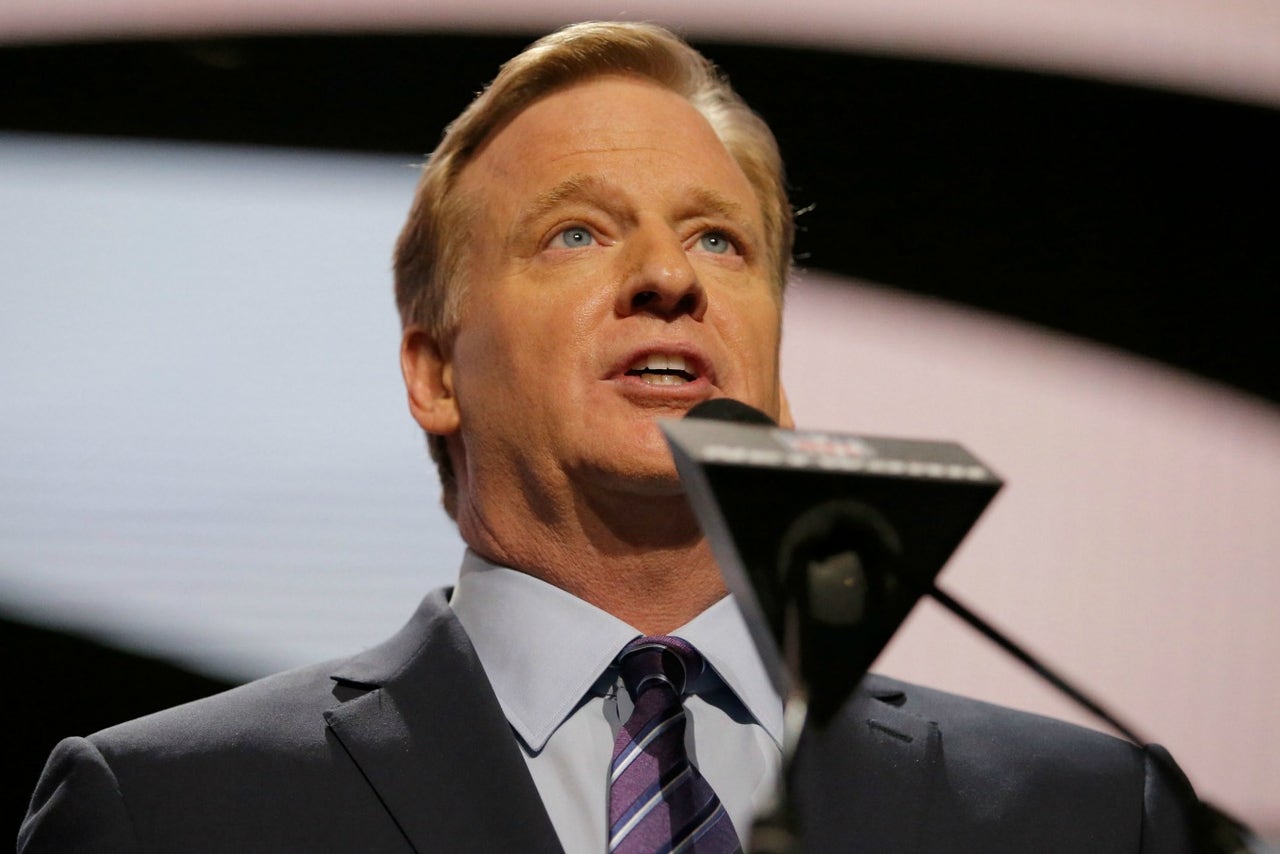 The way the NFL sees it, Brady is just a small cog in the mint. The NFL won't lose a cent from Brady's suspension — it'll probably benefit financially from the added intrigue into how the Patriots will play without him — and the public relations hit the league took from this saga is a short-term, penny-ante byproduct of a win that will get the NFL closer to its $25 billion goal.

Goodell and his bosses, the team owners, are fine with paying $50 now to make a $1,000 later, and what did they really lose? Is there a single fan that is going to stop watching the NFL because of this off-the-field saga?

Brady was the perfect proxy. If anyone could challenge the NFL and win, it was him. He's handsome, headstrong, wildly successful, and perhaps more important than all of that — he's a New England Patriot. 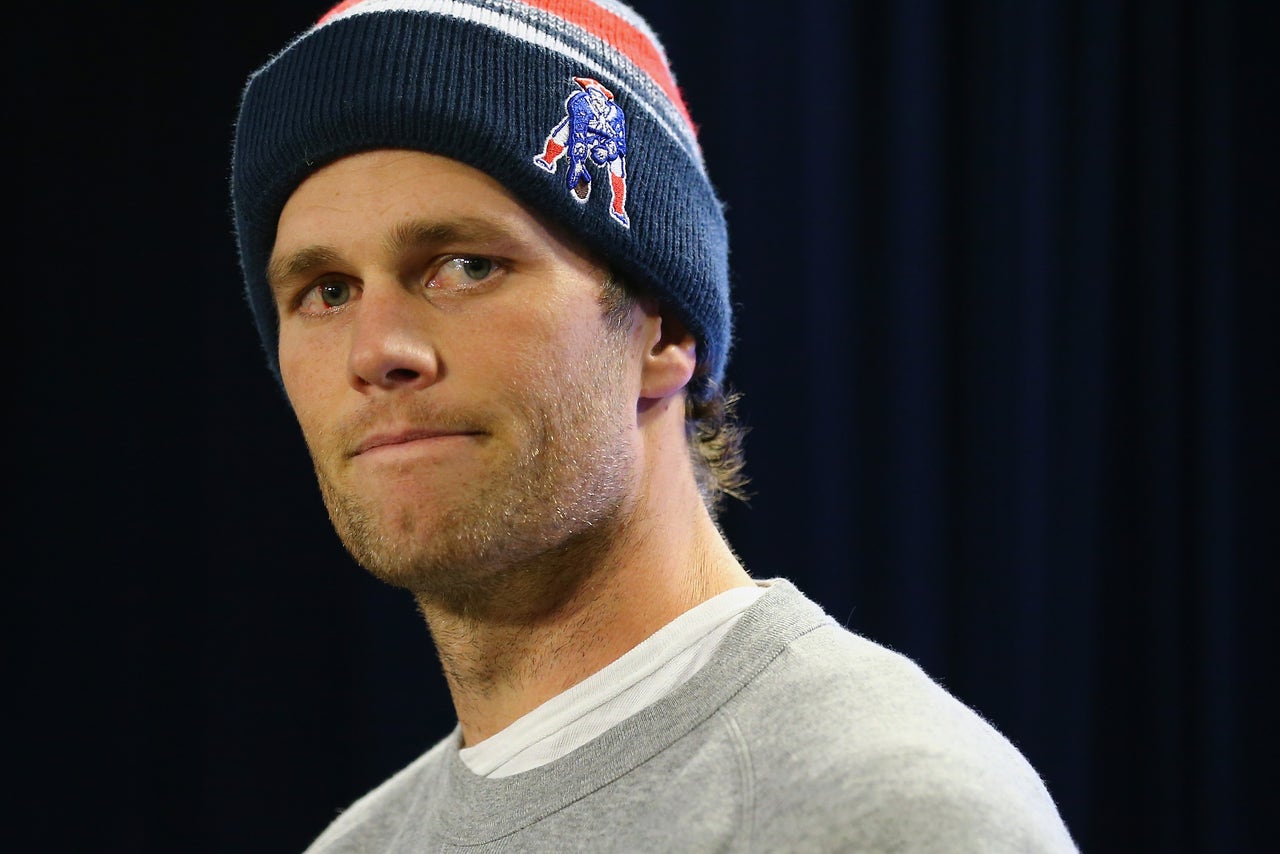 Five years ago, the NFL — which is technically an organization of teams — locked out the league's players when the league and the players' association couldn't create a new collective bargaining agreement.

The CBA is a massive document, but at the core of all sporting CBAs is a revenue split. How much do the owners get, how much do the players get? In some leagues, it's 50/50, but not in the NFL. Under the 1993 CBA, players received 57 percent of revenue. Since then, the league had grown at a tremendous rate, with average franchise values increasing 10 fold, and the owners were keen to get the majority the pie in the next CBA. So for 135 days in 2011, the NFL ceased regular operations.

It was Patriots owner Robert Kraft who broke the deadlock, pushing forward to get a 10-year CBA passed, saving the 2011 regular season. There was an undercurrent of resentment then — though it wouldn't come out until years later — that Kraft conceded too much to the players to get the league running again. The players would have cracked, eventually. Where else were they going to play football?

This resentment was compounded for some owners. There was a pervasive belief among owners and executives that Kraft — Goodell's closest confidant of all the team owners — was receiving favoritism from the commissioner. Kraft had an unofficial nickname around the league: "The assistant commissioner."

In the years following the lockout, that belief only deepened. Kraft had the commissioner's back on close to everything — he defended Goodell vigorously during the Ray Rice scandal, and pushed hard to have Goodell paid roughly $1 million by each team owner.

Kraft and Goodell's tight-knit relationship threatened to create a schism in the league, and could have pushed the commissioner out. Make no mistake, Goodell's job was on the line with Deflategate — any sign of favoritism towards the Patriots' star player could well have resulted in Goodell's ouster.

Goodell was smart enough to see the writing on the wall. He hit Brady with a shocking four-game suspension for breaking the league's "integrity of the game" honor code.

Sure enough, Kraft has made it clear over the last 18 months that he's hardly Roger Goodell's biggest fan anymore. 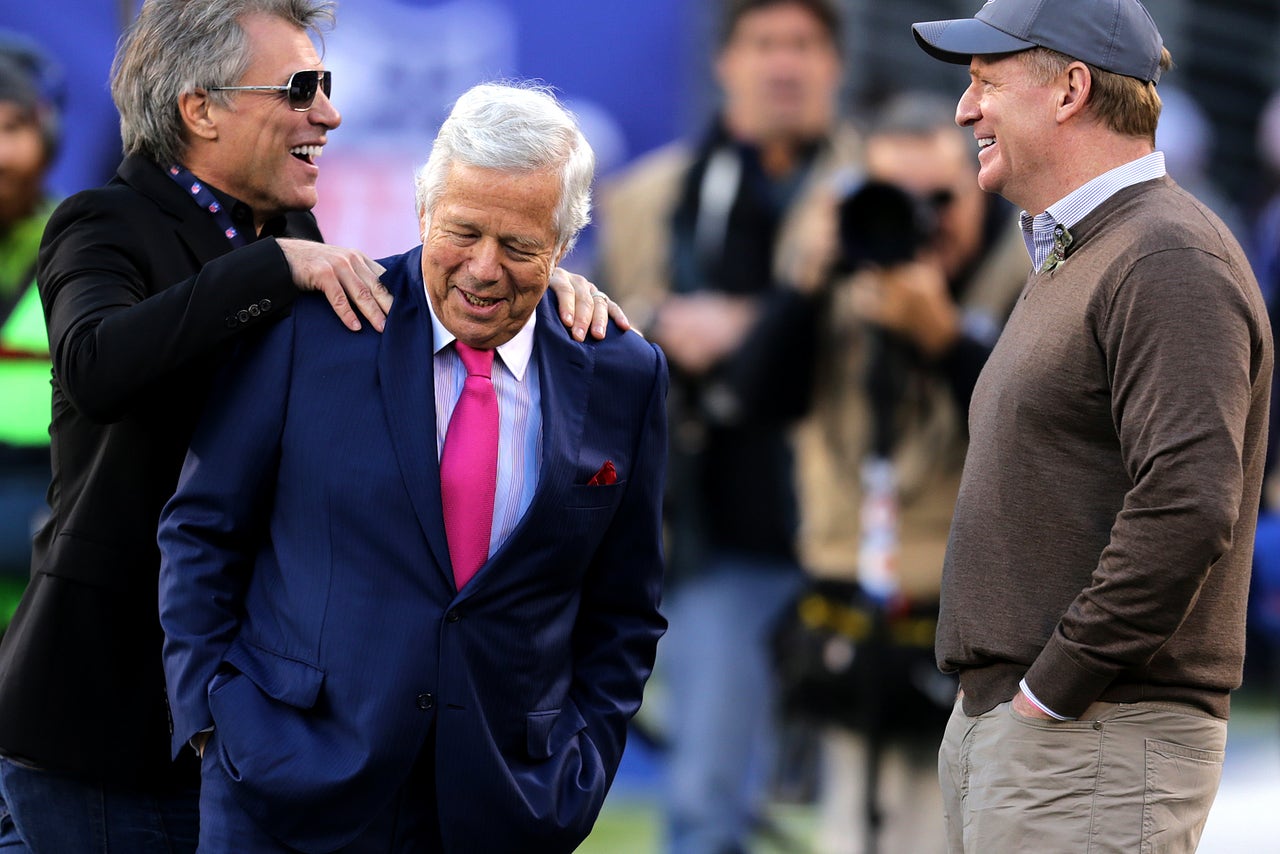 Brady made it easy for the league to drop the hammer on him. He refused to admit any guilt or association, and when the NFL asked for the contents of his cellphone — text messages, search terms, notes — as part of Ted Wells' investigation into the matter, Brady declined.

"I think that was one of the most ill-advised decisions I have ever seen because it hurt how I viewed his credibility," Wells said.

When Brady eventually did have the contents of two of his phones examined for the investigation, he provided nothing from Nov. 6, 2014 to March 5, 2015, which would have included the date of the alleged deflation in the AFC Championship Game. While backdoor efforts to see if Brady had contacted Patriots' equipment staff through calls or text messages showed he did not reach out before or after the game, the obstruction of the league's justice was enough to do him in.

This wasn't regular court of law — it was guilty until proven innocent, and Brady left the NFL reasonable doubt to convict.

The league hit him with a suspension, and the NFL braced itself for a legal war it felt confident it would win.

That's because the legal war had nothing to do Brady's alleged involvement in the possible deflation of footballs — it was about if the commissioner of the NFL could suspend him for four games for any reason he wanted. Brady and the NFL Players' Association fought like hell, but ultimately, the U.S. Second Court of Appeals ruled that:

"We hold that the commissioner properly exercised his broad discretion under the collective bargaining agreement and that his procedural rulings were properly grounded in that agreement and did not deprive Brady of fundamental fairness."

In short: Roger Goodell still runs this thing, and he can do to Tom Brady and Robert Kraft — two of the most powerful people in the league — whatever he pleases, so long as he goes through the motions associated with fairness. 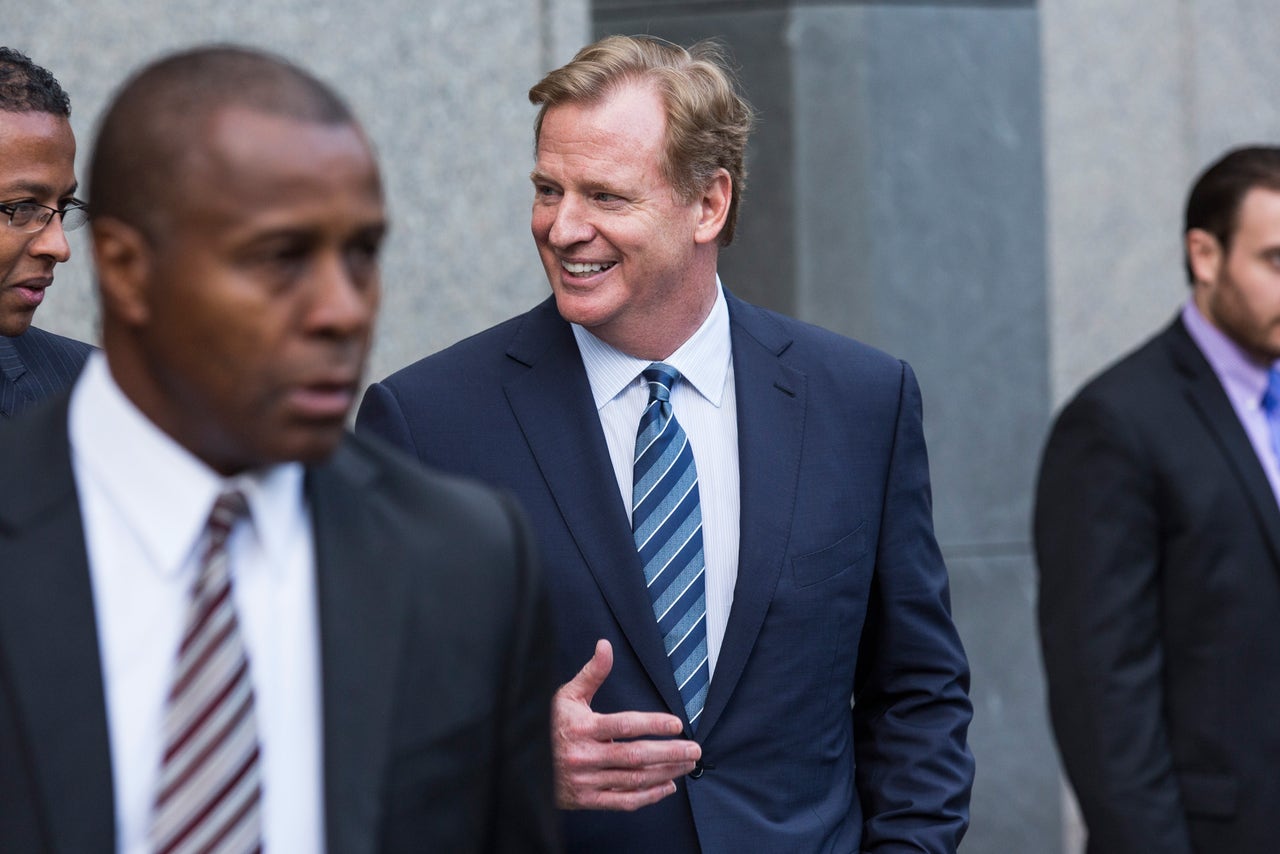 Goodell did exactly what the NFL owners hired him to do — make them money — and despite doing that exceptionally well, he was on the hot seat for some blunders (big ones, to be fair) he made that didn't affect the league's bottom line at all.

He's off the hot seat now.

Brady accepted the league's suspension Friday, and now everyone is back in line, behind the Goodell.

That's going to be the order of things for a long time.

If other owners — the silent majority, perhaps — weren't happy with Goodell for being close to Kraft, they can't claim favoritism anymore. The "assistant commissioner" has been let go, and he won't be able to mount a coup to get Goodell out of power.

That's because the league's win over Brady re-established a dominance over the NFLPA that was slipping as the current CBA enters its second half. Momentum is firmly back on the league's side now, and the precedent that has been set by Brady's suspension should keep it that way for the next five years, when the pie the two sides will split will probably be more than $20 billion. The NFL owners, Kraft included, can recoup the perceived losses of the 2011 CBA then. They're in good position to do so.

Like it or not, Roger Goodell has regained control. He still runs this thing, and he will for a long time.

Washington Runs Over Cowboys
Antonio Gibson's huge day gave Washington an important victory against the Cowboys and first place in the NFC East.
14 hours ago

What You Need To Know To Win $100,000
NFL fans have a chance to win big absolutely for free this week. Jason McIntyre is rolling with Tua, Kyler, and more.
15 hours ago

What Sports Fans Can Be Thankful For
2020 has been a year unlike any other. As Martin Rogers writes, sports have been there for us the entire time.
19 hours ago
those were the latest stories
Want to see more?
View All Stories
Fox Sports™ and © 2020 Fox Media LLC and Fox Sports Interactive Media, LLC. All rights reserved. Use of this website (including any and all parts and components) constitutes your acceptance of these Terms of Use and Updated Privacy Policy. Advertising Choices. Do Not Sell my Personal Info