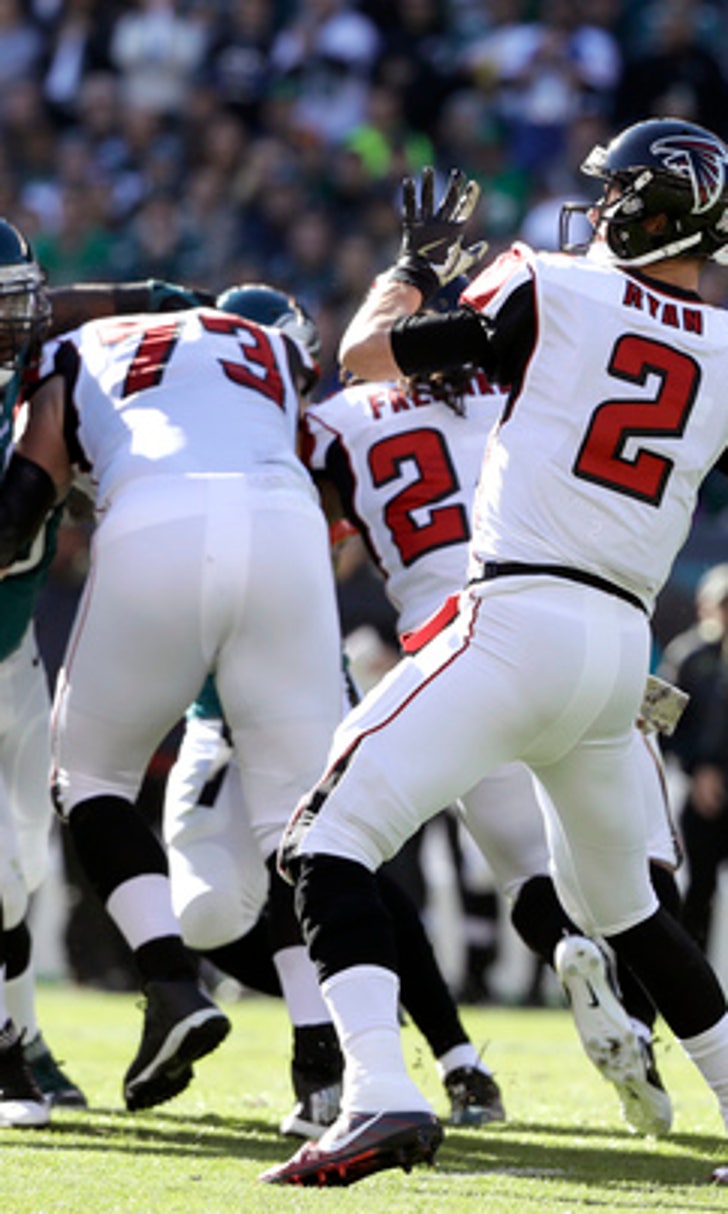 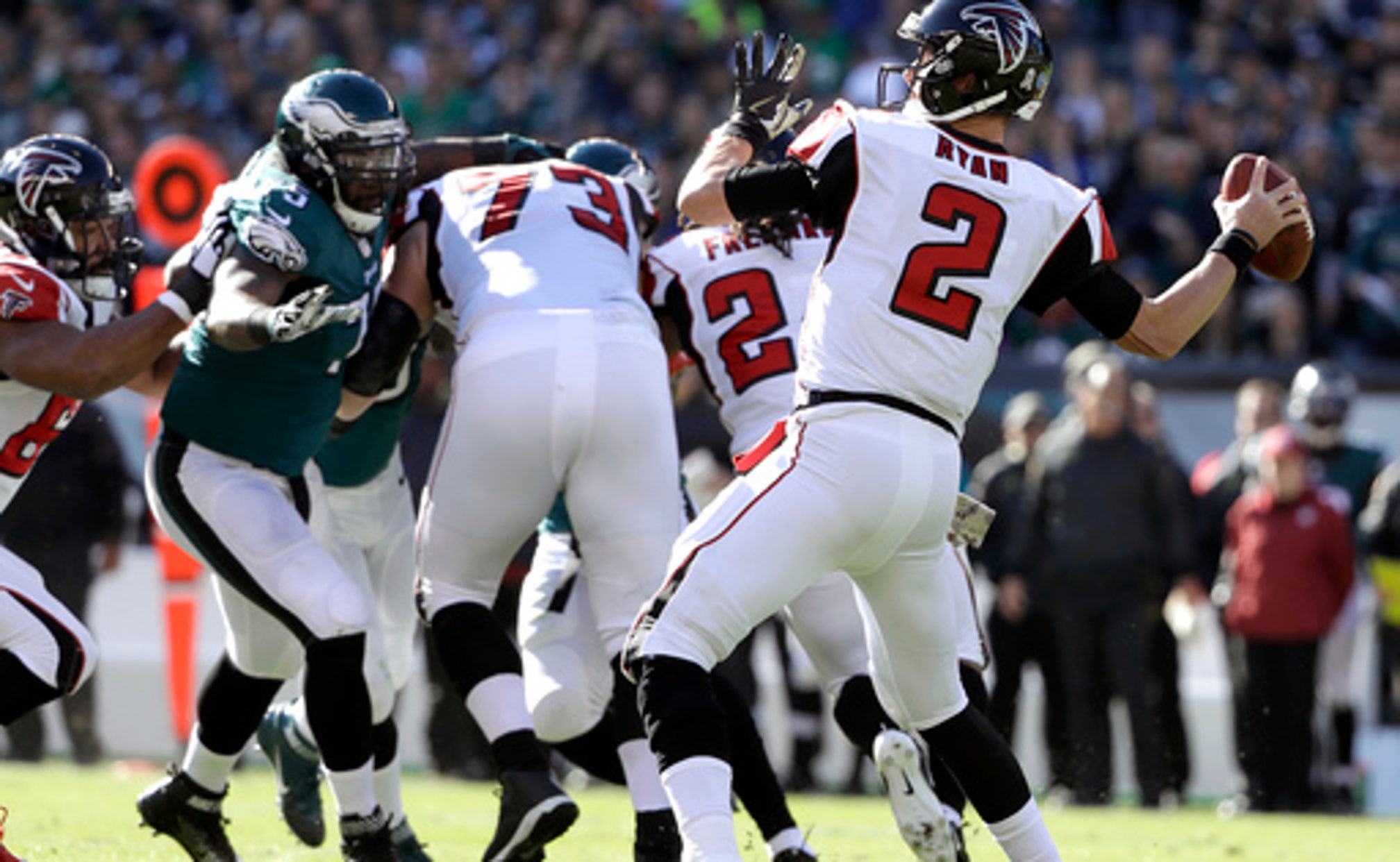 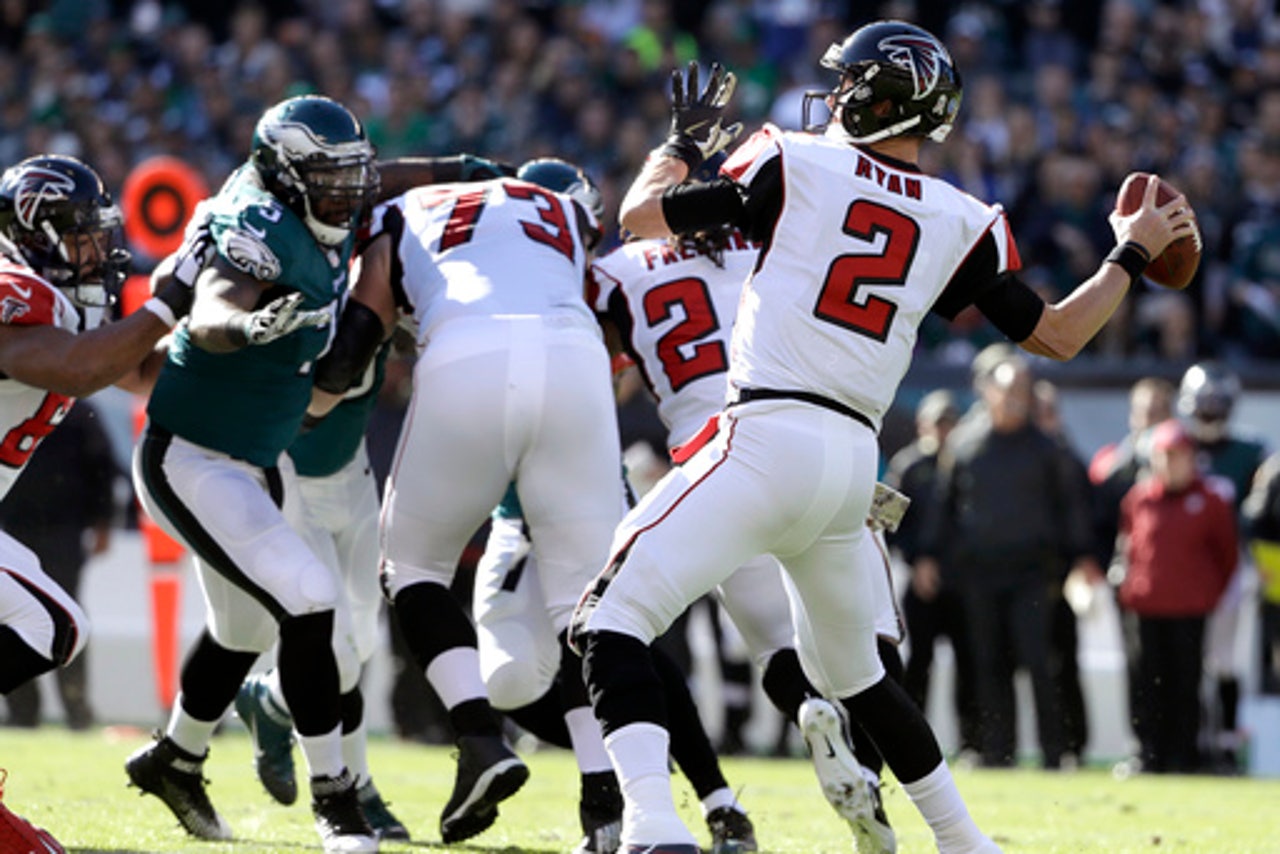 PHILADELPHIA (AP) On his fifth try, Carson Wentz got his first comeback win.

Wentz got a big assist from Ryan Mathews and a resurgent run game to rally the Philadelphia Eagles past the Atlanta Falcons, 24-15 on Sunday.

Mathews ran for 108 yards and two touchdowns, and Caleb Sturgis made a clutch field goal from 48 yards to seal the win late.

In their four losses, the Eagles (5-4) had the ball and a chance to take the lead late but couldn't pull it out.

After the Falcons took a 15-13 lead on a 76-yard TD pass from Matt Ryan to Taylor Gabriel, Wentz led an eight-play, 76-yard drive that Mathews finished off by running in from the 5 . Mathews also scored the 2-point conversion for a 21-15 lead.

''It was good to finally finish a game and we are going to build on that for sure,'' Wentz said. ''Obviously, the other four games we had a chance. It's good to get over that hump.''

A tenacious defense then did its job twice when Ryan and the Falcons (6-4) had chances to drive for go-ahead scores.

The NFC South-leading Falcons have a week off before they host the Arizona Cardinals on Nov. 27. The Eagles visit the Seattle Seahawks next week.

Here's some things we learned from Philadelphia's win over Atlanta:

RYAN'S RUN: Mathews returned from the doghouse - he had nine carries in the past two games - and helped the Eagles gain a season-best 208 yards on the ground. Rookie Wendell Smallwood chipped in with 70 yards. Their success allowed Philadelphia to control the ball for 38:10 and keep Ryan and the high-powered offense off the field.

''We did what we needed to do to win,'' Mathews said. ''I know the linemen love run blocking. They played great. They did all they could to open up holes for us.''

JULIO CAN'T CATCH THEM ALL: Julio Jones had 10 receptions for 135 yards, but he dropped a pass on third-and-12 after the Eagles reclaimed the lead. Jones couldn't make a difficult catch on fourth-and-5 on Atlanta's next drive.

BRINGIN' THE HEAT: The Eagles only sacked Ryan twice but pressured him into several quick throws that misfired. Defensive coordinator Jim Schwartz called some blitzes and the Falcons were only 2 for 11 on third downs.

''We were disruptive in the pass game and got him to move around the pocket,'' said Connor Barwin, who had one of the sacks.

PERFECT AT HOME: The Eagles are 4-0 at home, including convincing wins over the Steelers and Vikings. They've outscored their opponents 108-38. ''It's a lot of fun playing in front of this crowd,'' Wentz said. ''We have a lot of energy.''

DOMINATED UP FRONT: Atlanta's defensive line got pushed around and the offensive line had a tough time protecting Ryan and couldn't open up many holes for Devonta Freeman. ''It was definitely frustrating,'' coach Dan Quinn said. ''For us to have a team run the ball on us, with the physical style we like to play and have that explosiveness, that was a big factor.''

Can The Ravens Weather The Steelers?
As November nears, Jason McIntyre explains how real "football weather" will affect Week 8. Plus, why he's taking the Steelers.
6 hours ago

Stuck in Neutral
With Chicago's offense sputtering, is it time for Matt Nagy to return to Mitch Trubisky as his starting quarterback?
8 hours ago

Sizing Up Tua
Days before his first NFL start, everyone wants to know: How will Tua Tagovailoa measure up in Miami?
14 hours ago
those were the latest stories
Want to see more?
View All Stories
Fox Sports™ and © 2020 Fox Media LLC and Fox Sports Interactive Media, LLC. All rights reserved. Use of this website (including any and all parts and components) constitutes your acceptance of these Terms of Use and Updated Privacy Policy. Advertising Choices. Do Not Sell my Personal Info