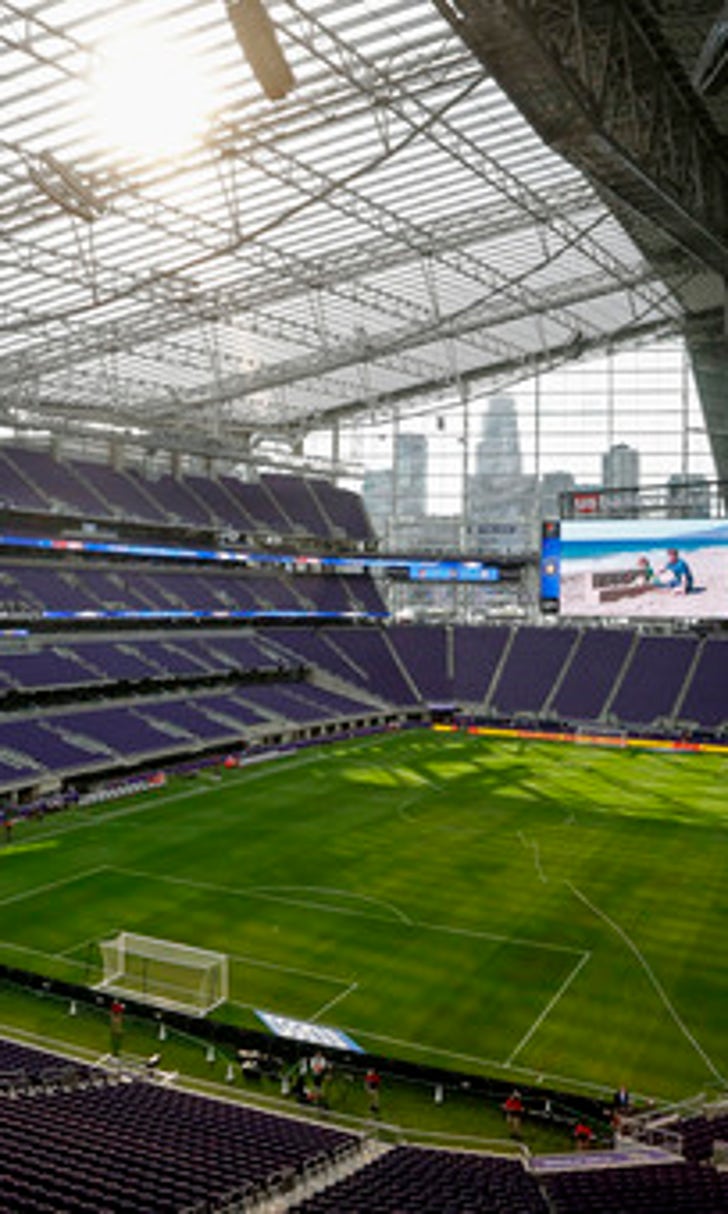 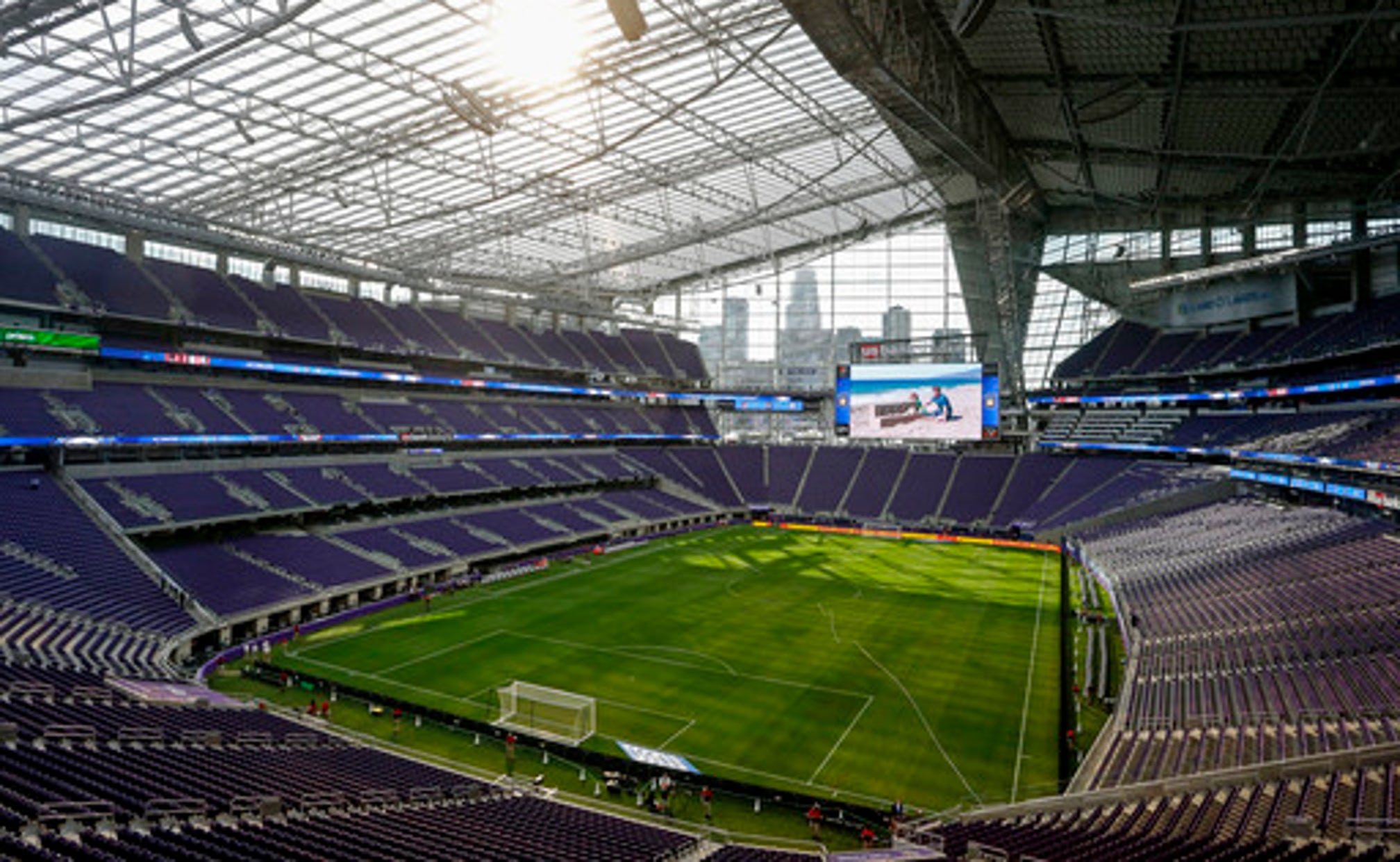 Vikings give US Bank Stadium a test drive, ahead of opener 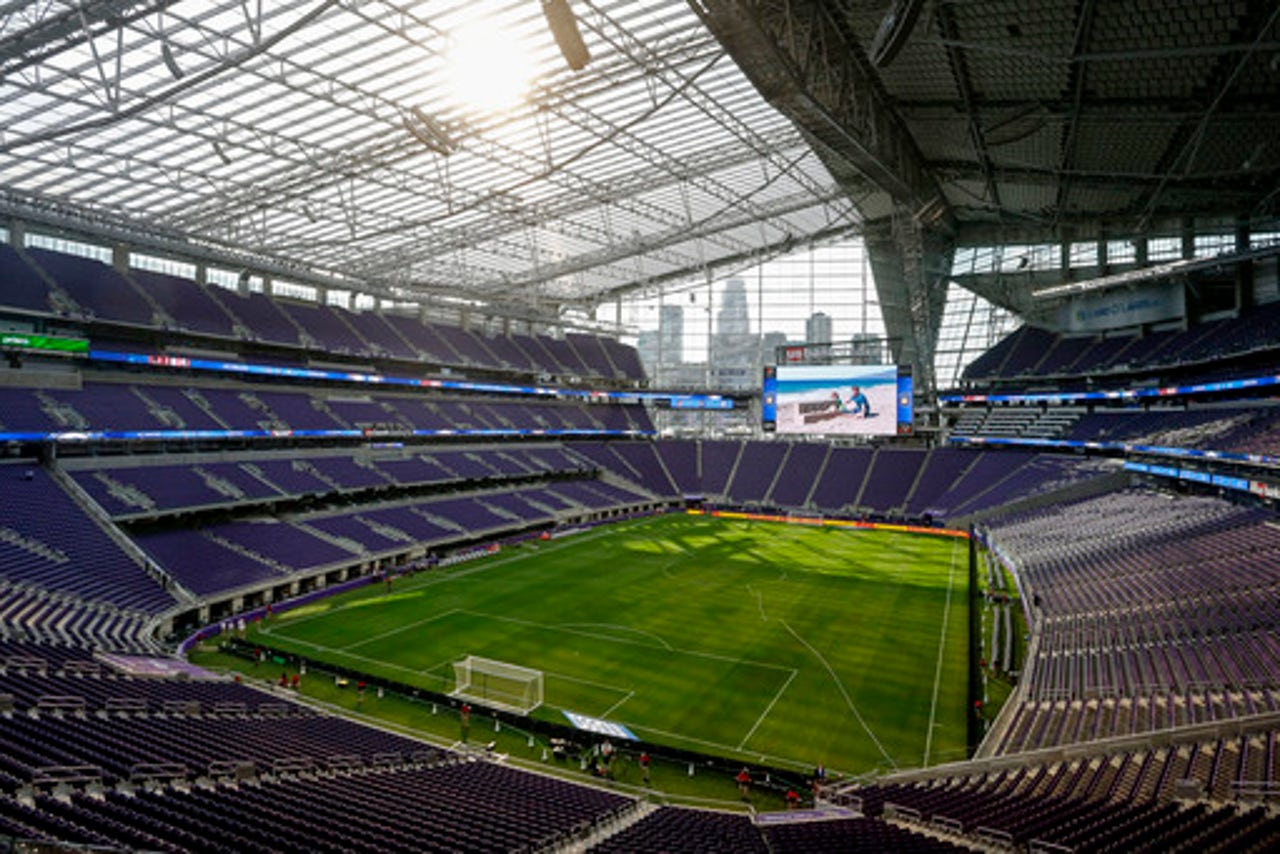 MINNEAPOLIS (AP) Chad Greenway looked at the camera on the sideline, rolled up his jersey sleeve and flexed his bicep muscle as if he were entered in a bodybuilding competition.

The giant image of Greenway's tough-guy pose, projected on the high-definition video board, engulfed the glass front of Minnesota's gleaming new stadium.

Even for experienced NFL players accustomed to the biggest and brightest amenities, the first time on the field was quite the sight. Especially the huge screen that will be staring straight at them whenever they're facing west.

''You can see people's zits and stuff like that. It's crazy,'' wide receiver Charles Johnson said. ''So you've got to make sure you're looking right when you come out here.''

The Vikings took practice Friday to U.S. Bank Stadium, where they'll debut Sunday for a preseason game against San Diego.

The goal of coach Mike Zimmer was to begin to condition the players, several of whom set foot in the $1.1 billion venue for the first time, to the so-far unfamiliar surroundings.

Tight end Kyle Rudolph hauled in a pass in the end zone during warmups and celebrated what was technically the first touchdown reception there as if he'd just caught a ball on the last play of the NFC championship game.

During breaks, players slowly bobbed their heads to glance up at the live feed of the workout displayed on the huge video boards. Zimmer ordered the offense to face that direction in full-team drills to get a gauge for the effect it'll have on the in-game vision.

''I think it's great for the fans, but ... distractions are what you let them be, if you're focused on what you have to do,'' Zimmer said, adding: ''These last two years have gone quick. Everything's been a whirlwind. They've done an unbelievable job of getting this place ready. It's a great stadium. Great atmosphere. A lot of purple.''

The five oversized pivoting glass doors on the west side were opened for practice, letting a light breeze in that could be felt on the artificial turf field.

The Vikings will have to decide before game time whether to go open or closed, but with the glass framing the doors and the translucent, space-age roof covering the south half of the ship-shaped, asymmetrical behemoth of a building there'll be enough natural light to make the environment almost feel like it's outside.

Shadows during afternoon games throughout the season could be a variable to deal with, and there's no telling how the potential wind through the doors would affect kicks and passes during games when they're open.

The biggest unknown, of course, is just how loud the enclosed stadium will be. Designers, engineers and officials have predicted plenty of noise, based on the acoustically reflective properties of the thin see-through roof material that's called ETFE.

''That's what I'm hoping for the most. I hope our crowd is extremely loud every time,'' Zimmer said. ''That part is a great home-field advantage, and the more that we can disrupt the opponents' offense it'll be better for our football team.''

When the Chargers and Vikings take the field, the only true goal for the teams will be to avoid injury. As far as meaningless exhibitions go, though, this one ought to be loud. There's only one first game, after all.

Metcalf Gives It All, Seattle Falls Short
The Seahawks wide receiver made one of the defensive plays of the year, but Arizona came away with a wild, bizarre OT win.
8 hours ago

Latest on Andy Dalton, OBJ Injuries
Two big-name players and franchises suffered injuries on Sunday. Here's what you need to know.
14 hours ago

NFL's Top Plays Of Week 7
Sunday's slate featured some of the wildest endings in recent memory. Here are the biggest moments from Week 7.
17 hours ago
those were the latest stories
Want to see more?
View All Stories
Fox Sports™ and © 2020 Fox Media LLC and Fox Sports Interactive Media, LLC. All rights reserved. Use of this website (including any and all parts and components) constitutes your acceptance of these Terms of Use and Updated Privacy Policy. Advertising Choices. Do Not Sell my Personal Info