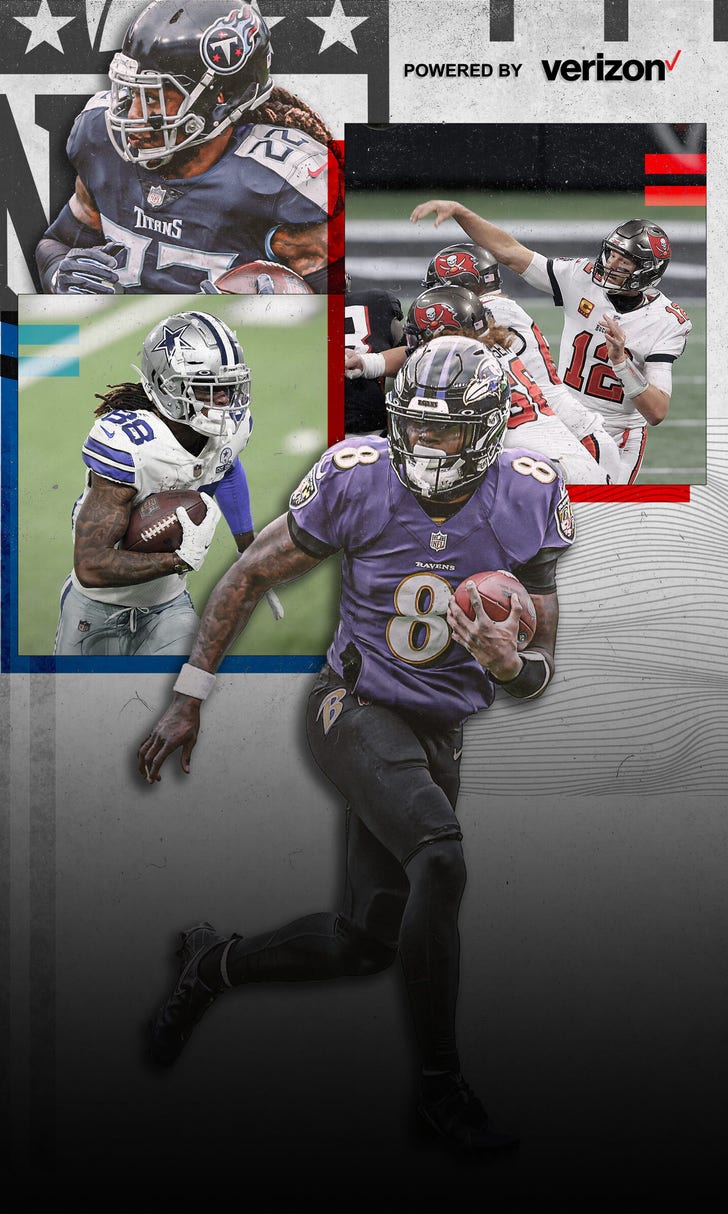 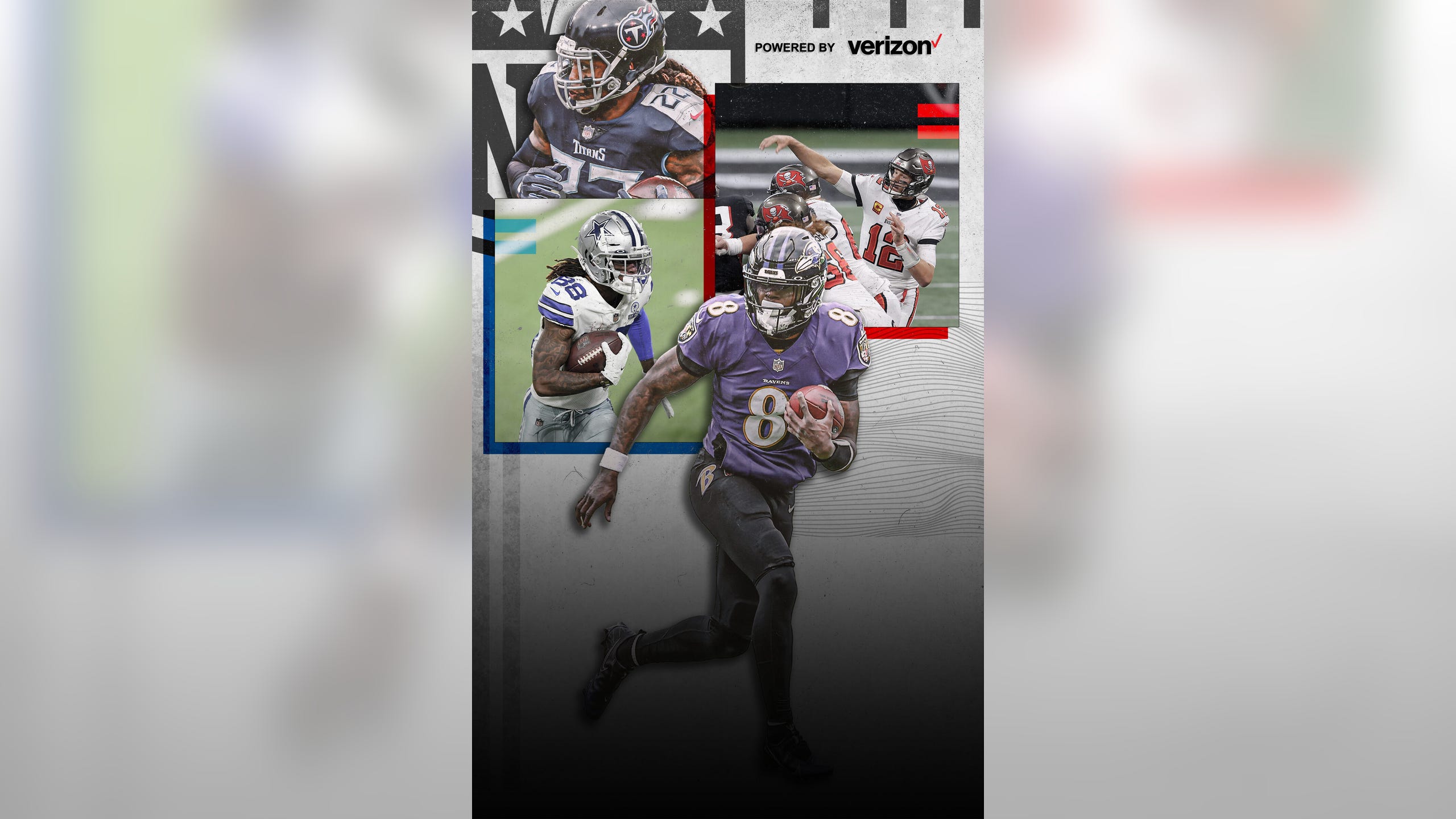 Playoff races in the NFL are as hot as can be, as teams vie to book passage to the postseason or avoid outright elimination.

In addition to the Dallas Cowboys remaining in the hunt with a win against the San Francisco 49ers, Tom Brady and the Tampa Bay Buccaneers were on the serving end of another Atlanta Falcons collapse. Plus, Lamar Jackson and the Baltimore Ravens continued to round into form in a busy slate of Sunday action.

Here are the major takeaways from the early window of Week 15:

It wasn’t quite Super Bowl LI – which saw Tom Brady (then a member of the New England Patriots) overcome a 28-3 deficit to win the – but the similarities were eerie.

The Falcons held a 24-7 lead in the third quarter before Brady & Co. put together a surgical comeback.

The Bucs scored back-to-back touchdowns before the clock flipped over to the fourth quarter, which Tampa Bay opened up with a field goal to tie the game at 24 apiece.

Brady then found Antonio Brown on a deep shot to give the Buccaneers their first lead of the game.

While the win didn’t clinch a playoff spot for the Bucs, it puts them a whisker away from locking down postseason play.

Dallas wins with back against the wall

Staring at playoff elimination with a loss, the Cowboys put together a stellar fourth quarter to remain in the hunt, securing a 41-33 victory over San Francisco.

Andy Dalton had the Cowboys humming early, leading Dallas to a 14-0 lead out of the gate.

But the 49ers battled back under Nick Mullens, eventually tying the game at 24-24 in the third quarter.

The Cowboys turned up the heat in the game’s final quarter, coaxing a pair of interceptions out of Mullens and scoring two touchdowns to extend their lead.

Rookie wideout CeeDee Lamb dashed any hopes of a Niners comeback with a spectacular return on an onside kick, taking the attempt 47 yards for a touchdown.

Dallas improved to 5-9 for the year and remains in the NFC East race following Washington’s loss to Seattle.

Washington Football Team’s newfound defensive prowess garnered a lot of attention heading into this Week 15 clash, but it was the Seahawks’ defensive effort that put an exclamation point on a 20-15 win for Seattle.

A week after spanking the New York Jets 40-3, Pete Carroll’s team kept similar energy in their trip to the capital.

Russell Wilson and the Seahawks kept WFT’s defensive line largely at bay with short, effective passes – Wilson went 18-for-27 for 121 yards and a touchdown, an average of 6.7 yards per completion – and a running game that spread around the wealth.

Washington’s defense still made its presence felt, forcing an interception from Wilson that WFT turned into a touchdown on the ensuing possession, but ultimately Seattle got the last laugh.

Seahawks running back Chris Carson had 63 yards on 15 carries, while Carlos Hyde toted the rock twice for 55 yards, including a long touchdown. Wilson also chipped in with six rushes for 52 yards.

Washington QB Dwayne Haskins returned to the starting role with Alex Smith injured, and Haskins had a pair of interceptions to go along with a touchdown and 295 passing yards. The Seahawks forced two total turnovers in the game, clinching a playoff berth in the process.

Another surprise star emerged from the clash – a sharp camera (which you can see in action in some of the clips above!) that caught the attention of Twitter immediately.

For Seahawks fans, they were treated to not only a win, but a win in ultra-high definition!

The Ravens won their third straight game with a 40-14 pasting of the Jacksonville Jaguars.

Jacksonville entered the game sporting one of the league’s worst rushing defenses, and Baltimore seized on the opportunity.

Ravens QB Lamar Jackson rushed 10 times for 35 yards and a touchdown, while rookie J.K. Dobbins made it four straight games with a TD.

Jackson also did damage in the air, going 17-of-22 for 243 yards and three touchdowns, including a score to Dez Bryant.

Bryant’s touchdown marked his first trip to the end zone since Dec. 2017, as the Ravens moved to 9-5 to keep their playoff hopes alive.

Already eliminated from playoff contention last week, the Texans were looking to avoid a three-game losing streak in their visit to Indianapolis.

The two AFC South foes went mano-a-mano, after Indy ran out to an early 14-0 lead that included a touchdown run for Jonathan Taylor.

The Texans battled back, as Deshaun Watson threw a pair of TD passes, giving him a career-high 27 touchdown passes on the season.

Coutee’s fumble near the end zone was recovered by the Colts, who then took a knee to close out the game with a 27-20 triumph.

The 2020 NFL playoffs will not feature the Patriots, a stark break from the norm as of late.

Tua Tagovailoa and the Miami Dolphins officially turned out the lights on Cam Newton and the Patriots’ playoff hopes with a 22-12 win that didn’t feature a passing touchdown from either starting QB.

Instead, Miami relied on a running game led by Salvon Ahmed (23 carries, 122 yards, one TD) and Matt Breida (12 carries, 86 yards) and a handful of other ballcarriers. Tua got in on the rushing attack, as well, picking up two crucial rushing scores.

Miami’s defense also continued to be a force to be reckoned with, forcing and recovering a big fumble. The turnover pushed Miami’s streak of consecutive games forcing a turnover to 20 games.

Chicago’s defense held firm late in the fourth quarter, forcing a pair of turnovers out of the Minnesota Vikings on either side of a Cairo Santos field goal to win 33-27 and move to .500 for the season.

The Bears’ first big play came when pressure from defensive end Brent Urban left Kirk Cousins with no choice but to heave a desperation attempt on fourth down that came up empty.

Santos then hit a field goal to extend Chicago’s lead to 33-27. Minnesota still had a shot to steal the win, but Cousins’ deep pass in the game’s waning seconds fell into the hands of the Bears to put the game on ice.

With the win, Chicago’s slim Wild Card hopes still have a heartbeat.

Derrick Henry still has a ways to go to reach the 2,000-yard mark, but it’d be tough to bet against him with the way he’s running at the moment.

The bulldozing Titans running back added 147 yards on 24 carries in a 46-25 rout for the Titans against the Detroit Lions, giving King Henry 1,679 rushing yards for the season.

Though the win didn’t formally clinch a playoff spot for the Titans, it kept them in the driver’s seat.

Meanwhile, the Lions were officially eliminated from playoff contention.

Worth The Bills?
Josh Allen has ascended rapidly after Buffalo took a chance on him in 2018. Did his play in 2020 earn him a big-money deal?
7 hours ago

Generation Gap
It's GOAT vs. Baby GOAT! But beyond Brady and Mahomes, Geoff Schwartz examines the matchups that will decide Super Bowl LV.
7 hours ago

The Numbers: Andy Reid
It's back-to-back title games for Andy Reid. Here are the numbers that define the future Hall of Famer entering Super Bowl LV.
8 hours ago

Brady vs. Mahomes: A Clash Of Titans
Patrick Mahomes is set to take on Tom Brady in a Super Bowl matchup that’s as juicy as it gets in both star power and context.
22 hours ago
those were the latest stories
Want to see more?
View All Stories
Fox Sports™ and © 2021 Fox Media LLC and Fox Sports Interactive Media, LLC. All rights reserved. Use of this website (including any and all parts and components) constitutes your acceptance of these Terms of Use and Updated Privacy Policy. Advertising Choices. Do Not Sell my Personal Info