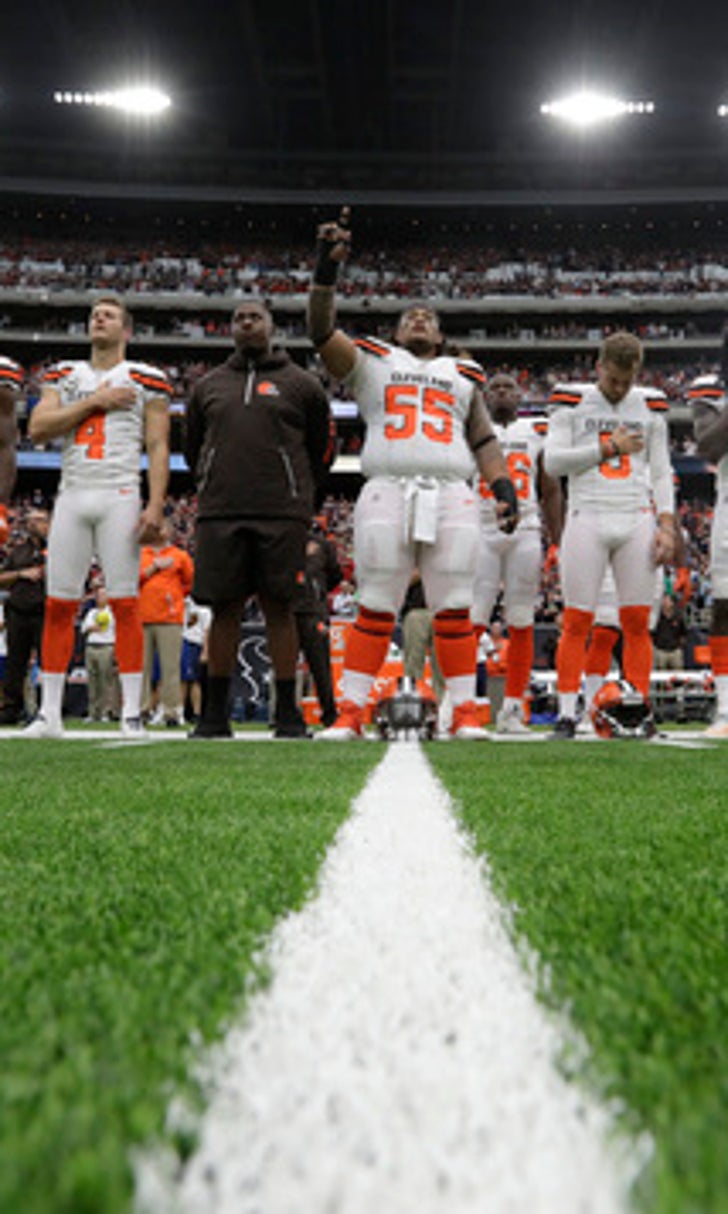 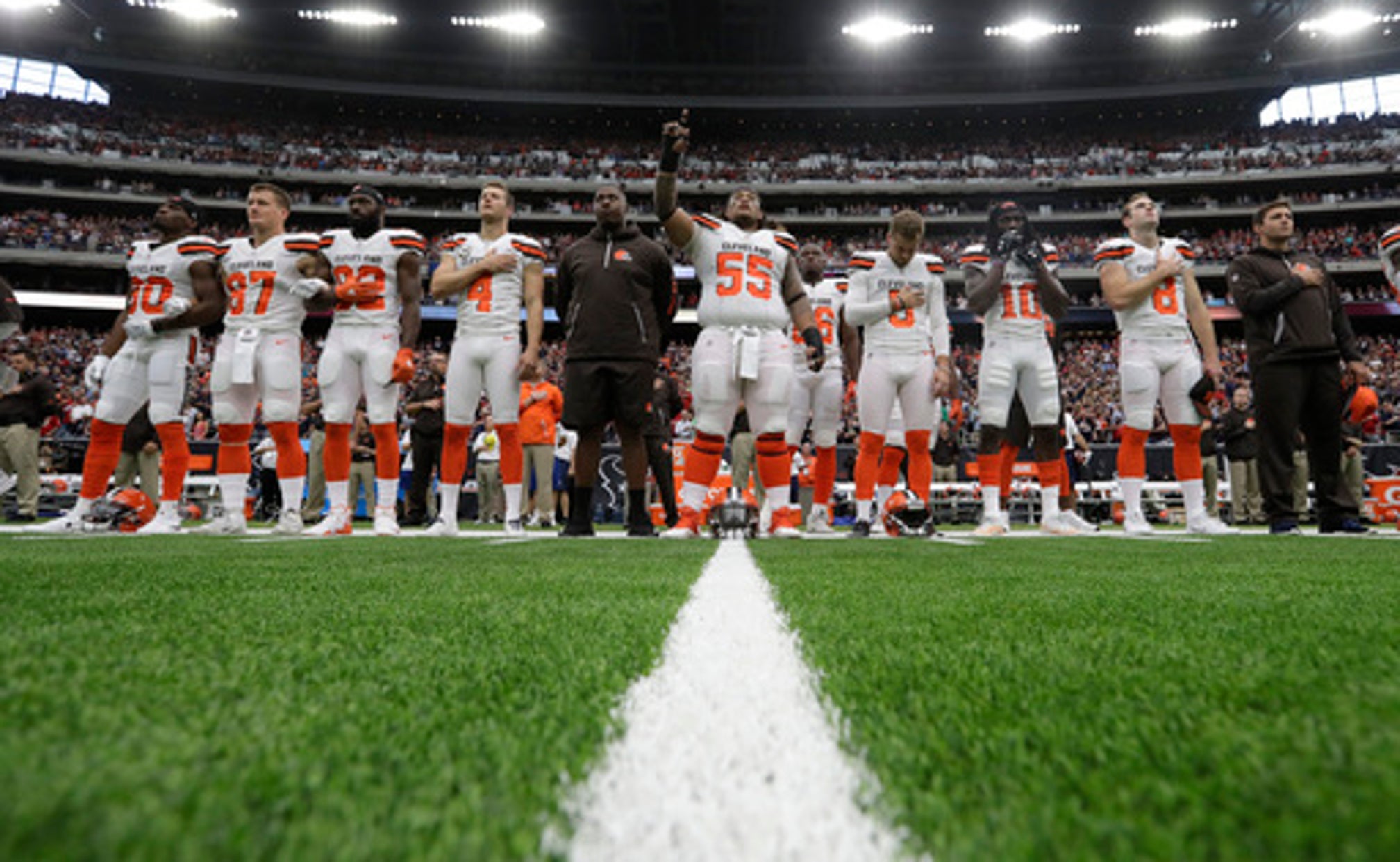 The Latest: QB Siemian returns for second half

The Latest on the NFL's sixth Sunday of the regular season (all times Eastern):

Broncos quarterback Trevor Siemian has returned for the second half after hurting his left shoulder while trying to make a tackle against the New York Giants.

Siemian sat out the last series of the first half as trainers examined his non-throwing shoulder. He was injured when he lunged in an attempt to stop an interception return for a touchdown by Janoris Jenkins.

Siemian threw two interceptions in the first half.

Broncos quarterback Trevor Siemian hurt his left shoulder while diving to stop an interception return for a touchdown and is questionable to return.

After being picked off by New York Giants cornerback Janoris Jenkins, Siemian lunged to stop him down the sideline late in the first half. Siemian headed to the bench to be looked at by the trainers as backup Brock Osweiler trotted out to the field on the next possession.

Tampa Bay Buccaneers quarterback Jameis Winston has suffered a right shoulder injury in the second quarter and is doubtful to return against the Arizona Cardinals.

Winston came away holding his throwing shoulder after taking a hit midway through the quarter with the Buccaneers trailing 21-0. He was replaced by Ryan Fitzpatrick on the next series after throwing 51 yards on 5-of-10 passing.

Earlier Sunday afternoon, Packers quarterback Aaron Rodgers broke his collarbone and the team said he could miss the rest of the season.

The Oakland Raiders held a moment of silence and kept the torch that honors late owner Al Davis unlit as part of a pregame ceremony for those affected by the wine country wildfires.

Former Raiders receiver Cliff Branch announced the tribute. Branch lost his home in the fires this past week.

The Raiders have lit a torch at the Coliseum in honor of Davis for every game since his death in October 2011.

The blazes have been blamed for at least 40 deaths and destroyed some 5,700 structures.

Raiders running back Marshawn Lynch once again was the only player from either team to sit during the national anthem.

Aaron Rodgers has a broken collarbone and ''could miss the rest of the season.''

The Green Bay Packers made the announcement about their star quarterback in the third quarter at Minnesota. The Packers also posted on their official Twitter account that ''there's a chance he could miss the rest of the season.''

Brett Hundley has taken over since Rodgers was hurt on the second drive of the game. The Vikings lead 17-10.

The Packers have also ruled out cornerback Quinten Rollins (ankle) and left guard Lane Taylor (ankle/knee) with injuries suffered during the game.

Rookie quarterback C.J. Beathard has replaced Brian Hoyer for the San Francisco 49ers in the second quarter against the Washington Redskins.

Beathard's grandfather, Bobby, was a Super Bowl-winning general manager for the Redskins decades ago.

Beathard, a third-round draft pick out of Iowa, came in with the Niners trailing 14-0. He threw his first NFL pass on his second play, a 13-yard gain to Garrett Celek.

Hoyer was 4 for 11 for 34 yards and the 49ers managed to gain a total of only 39 yards and two first downs in their first four possessions.

There are blue skies and relatively clear air over the Oakland Coliseum two hours before the Raiders are set to kick off their game against the Los Angeles Chargers.

The Raiders had been forced to alter their practice schedule this week because the air in the area was deemed dangerous because of smoke from the fires in wine country.

The NFL had been monitoring the situation to determine whether the game would need to be moved. But the air cleared up Saturday in Oakland and the quality is rated as good on game day.

Mitchell Trubisky has held up well early in his first NFL road start.

Although the Bears didn't score in the first quarter with their rookie quarterback calling the signals, they got five first downs and gained 42 yards in their first two series.

The former North Carolina standout is the first rookie to start at quarterback for Chicago since Kyle Orton in 2005.

Green Bay Packers quarterback Aaron Rodgers was carted off the field with a right shoulder injury, and the team said his return was questionable.

Rodgers took a hard hit from pass-rushing Vikings linebacker Anthony Barr. Rodgers landed on his throwing arm as he fell after his second-down throw was dropped by tight end Martellus Bennett midway through the first quarter. Rodgers yelled at Barr as he walked off, but no penalty was called.

Backup Brett Hundley entered the game as Rodgers was examined inside the blue medical tent on the sideline. Rodgers was taken to the locker room on a cart.

A half-dozen San Francisco players knelt during the national anthem before the team's game at Washington - a week after about a dozen 49ers took a knee and Vice President Mike Pence left the stadium.

Safety Eric Reid, who labeled Pence's exit a ''PR stunt,'' was among the six active 49ers who knelt on their sideline.

They were joined by linebacker Dekoda Watson, who was inactive and not in uniform.

The Redskins all stood, as did most players around the NFL.

The 49ers have been among the most visible protesters in the NFL, which has found itself in a back-and-forth with President Donald Trump about standing during ''The Star-Spangled Banner.'' Last year, then-49ers quarterback Colin Kaepernick started the movement to kneel or sit during the anthem as a way of protesting racial inequality and police brutality.

Three Miami Dolphins players were not on the field for the national anthem before their game against the Atlanta Falcons.

The three players had taken a knee in protest during the anthem in recent games. This week, Dolphins coach Adam Gase asked players to remain in the locker room or tunnel if they were not going to stand for the anthem.

All other Miami and Atlanta players stood during the anthem.

The Green Bay Packers will have their starting offensive line fully intact for the first time in six games this season when they play at Minnesota. Left tackle David Bakhtiari is back from a hamstring injury that kept him out of the last four games, a key development for the Packers in trying to slow Vikings defensive end Everson Griffen and the team's strong pass rush.

Running back Ty Montgomery has also returned, after missing the last game because of broken ribs.

The outlook on the other side of the ball isn't as bright. Strong safety Morgan Burnett is out with a hamstring injury, as are both starting cornerbacks Davon House (quadriceps) and Kevin King (concussion). The Packers are missing two backup linebackers, too, with Ahmad Brooks (back) and Joe Thomas (ankle) on the inactive list.

The NFL's sixth Sunday features a surprising matchup for first place in the AFC East, as the Patriots face the Jets, both 3-2.

That early afternoon slate also includes the Packers and Vikings (3-2) battling in Minnesota. A win by the Packers (4-1) can give them control of the NFC North.

Detroit (3-2) travels to New Orleans (2-2), which has won two in a row after losing the first two games of the season.

The later afternoon games include the Steelers (3-2) trying to rebound after a shocking loss to Jacksonville, but Pittsburgh will have to do that against the NFL's last undefeated team, Kansas City (5-0).

The night game features the winless Giants at Denver (3-1).

NFL's Top Plays Of Week 12
It's another wild Sunday in the NFL. Check out the best moments from across the league!
1 hour ago