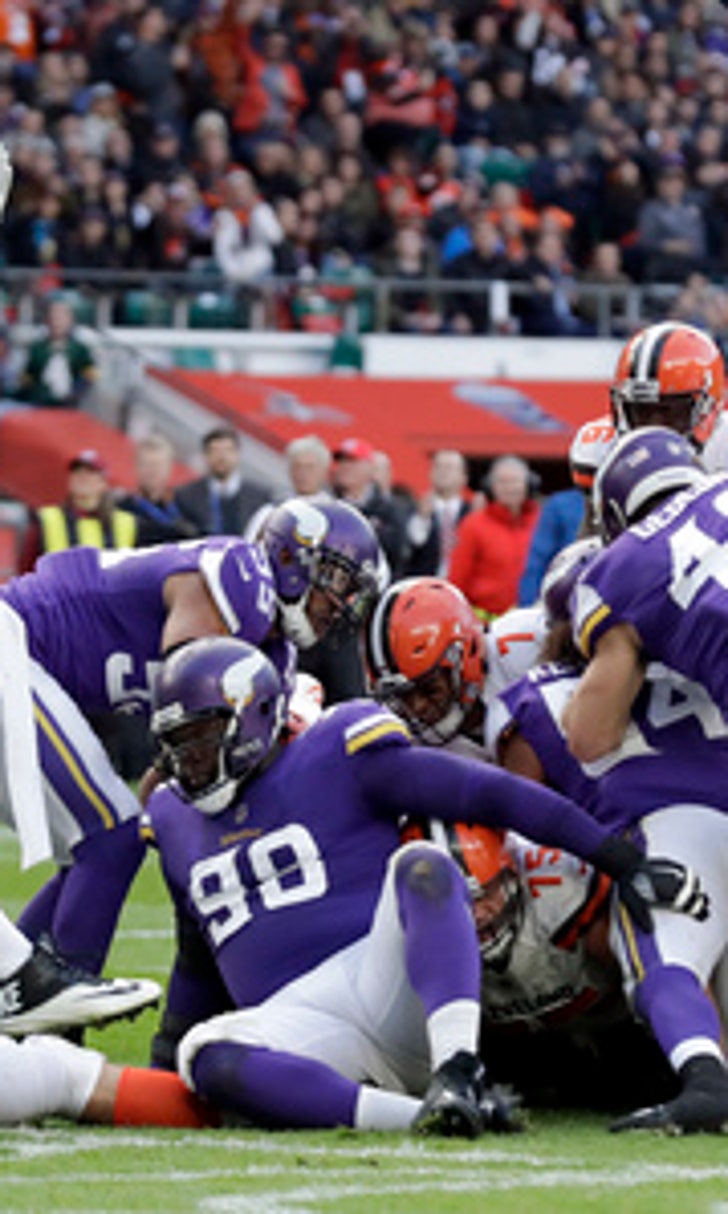 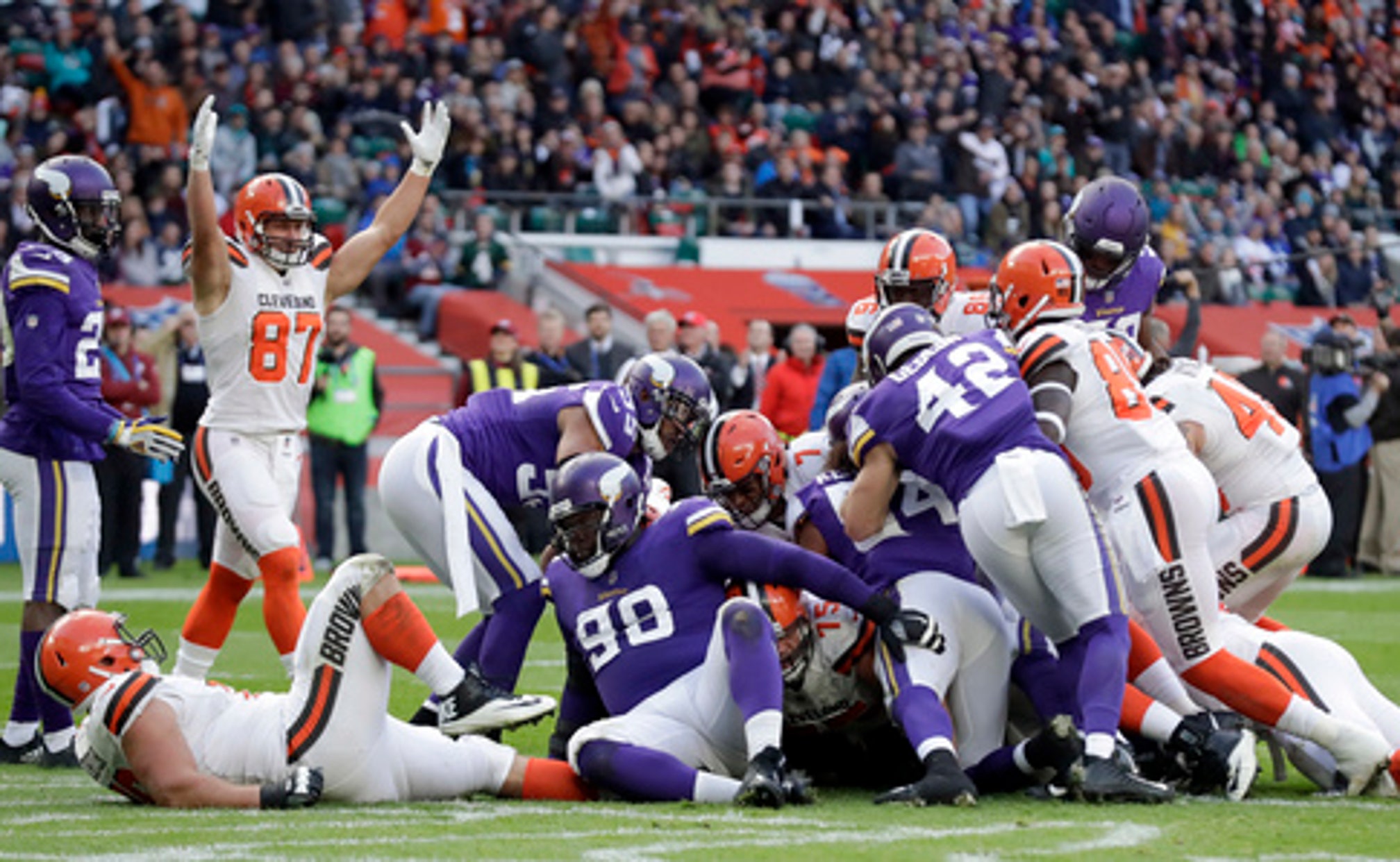 The Latest on the eighth Sunday of the NFL regular season (all times Eastern):

The Dallas Cowboys beat their NFC rivals the Redskins 33-19 in Washington, and the Seahawks rallied past the Texans in a shootout in late afternoon action.

In the late game, Le'Veon Bell and the Pittsburgh Steelers visit Matthew Stafford and the Detroit Lions.

The Week 8 finale pits the Denver Broncos and Kansas City Chiefs, two teams that were riding high before losing their last two games.

DeShaun Watson threw four more touchdown passes, giving him an NFL record 19 through his first seven career games. That's one more than Kurt Warner had in 1999 with the then-St. Louis Rams.

But the Texans lost a shootout 41-38 to Russell Wilson and the Seattle Seahawks, who sealed the win on Richard Sherman's interception of Watson's deep throw with seven seconds left.

Houston fell to 3-4, a game behind Tennessee and Jacksonville in the AFC South. The Seahawks won their fourth straight after a 1-2 start.

Philadelphia Eagles safety Malcolm Jenkins says the next proposed meeting between the owners and players to discuss social justice initiatives has been canceled.

''The league didn't accept our invitation,'' Jenkins said after the Eagles win over the 49ers.

The league and players met last week in New York to discuss player demonstrations during the national anthem and other issues.

Jenkins, one of the founders of The Players Coalition, says owners and the players should meet to discuss alternative ways players can get their message out.

''They want to get back to football; we want to move past anthem demonstrations,'' Jenkins said. ''But to do that, we need to be able to replace the platform that we have.''

The early games are in the books and there weren't any shutouts.

That's notable because the NFL's Week 8 began with the Ravens' 40-0 whitewash of the Dolphins on Thursday night. That was the fourth shutout in a five-day span and the sixth overall this season.

There were only three shutouts all of last season and just two the year before that.

Philadelphia improved to a league-best 7-1.

Only 10 active Houston Texans players stood for the national anthem with the rest of the team kneeling down.

The Texans had indicated there would be some type of protest following comments by owner Bob McNair. McNair has issued two apologies and is attempting to explain his comments after a story in ESPN The Magazine this week revealed that he said ''we can't have the inmates running the prison'' during a meeting of NFL owners about players who protest by kneeling during the national anthem.

There were reports the Texans would consider staying in the locker room for the anthem, but the entire team took the field about 10 minutes before kickoff. When the anthem started more than half the active roster took a knee.

The majority of Seattle's defensive line continued to sit as it has for most of the season.

The Bears have lost tight end Zach Miller for the remainder of their game in New Orleans after an apparently serious knee injury on what initially was ruled a touchdown catch, and then overturned on video review.

Miller came down awkwardly on his left leg after hauling in Mitchell Trubisky's 25-yard pass to the end zone while safety Rafael Bush dived, his arm outstretched, to try to break up the play.

Miller's left leg hyperextended as he came down with the ball and crashed to the turf. Replay showed he bobbled the ball upon his upper body's impact with the field, and it was ruled that the ball made contact with the ground when it briefly jarred lose in Miller's arms.

The ruling of an incomplete pass came as Miller was carted off the field, and the Bears then concluded the drive with Connor Barth's 44-yard field goal to trim the Saints' lead to 14-6 late in the third quarter.

The Buffalo Bills added running back Carlton Chester ''Cookie'' Gilchrist to their Wall of Fame at halftime of their game against the Oakland Raiders today.

Gilchrist was the American Football League player of the year in 1962 when he rushed for 1,096 yards and a league-leading 13 touchdowns. Along with quarterback Jack Kemp, he helped the Bills win their first of two AFL championships in 1964.

Gilchrist is third all-time in franchise history with 31 rushing touchdowns behind Thurman Thomas (65) and O.J. Simpson (57).

Most of them were at the 49ers-Eagles game, where Philadelphia players Malcom Jenkins and Rodney McLeod raised their fists. Kneeling on the 49ers sideline were Eric Reid, Eli Harold, Adrian Colbert and Marquise Goodwin.

At Cincinnati, the Colts joined arms on the sideline, and in the final NFL game in London this season, almost all of the Vikings and Browns stood arm-in-arm during the playing of ''The Star-Spangled Banner'' and ''God Save The Queen.''

Some members of the Houston Texans will likely make some type of expression later at Seattle in reaction to comments by the team's owner.

Bob McNair has apologized after a report revealed that he said ''we can't have the inmates running the prison'' during a meeting of NFL owners about players who protest by kneeling during the national anthem.

Week 8 began with another Cleveland loss. The Browns fell to 0-8 with a 33-16 loss to the Vikings in London.

There isn't a single game in this weekend's schedule pitting teams with winning records but there are several milestones in reach.

Saints quarterback Drew Brees needs a dozen completions against the Bears to reach 6,000 for his career and join Hall of Famers Brett Favre and Peyton Manning in that exclusive club.

Buccaneers quarterback Jameis Winston needs 225 passing yards against the Panthers to reach 10,000 for his career.

Bills kicker Stephen Hauschka needs one more field goal of 50 or more yards to set the NFL record with 13 consecutive conversions from that distance.

The Cleveland Browns are closing in on their eighth loss, halfway to a winless season.

The Browns had their first halftime lead of the season, and led Minnesota 16-15 late in the third quarter before the Vikings responded with two touchdown drives to take a 30-16 lead in London.

Jerick McKinnon scored from a yard out and added a 2-point run to make it 23-16. Then, tight end Kyle Rudolph caught a 4-yard pass from Case Keenum.

The Browns are one of two winless teams in the NFL this season. The other is the San Francisco 49ers, who play the Philadelphia Eagles today.

The Cleveland Browns have their first halftime lead of the season after DeShone Kizer put them up 13-12 against the Minnesota Vikings on Sunday at Twickenham.

The rookie quarterback capped an 82-yard drive with a 1-yard run for a touchdown to give the winless Browns (0-7) a four-point lead with 42 seconds left in the half.

The Vikings responded with a 34-yard field goal as time expired.

The Browns took a 6-0 lead through a 26-yard touchdown run by Isaiah Crowell on their first drive before the Vikings responded with nine straight points. Both teams missed an extra point.