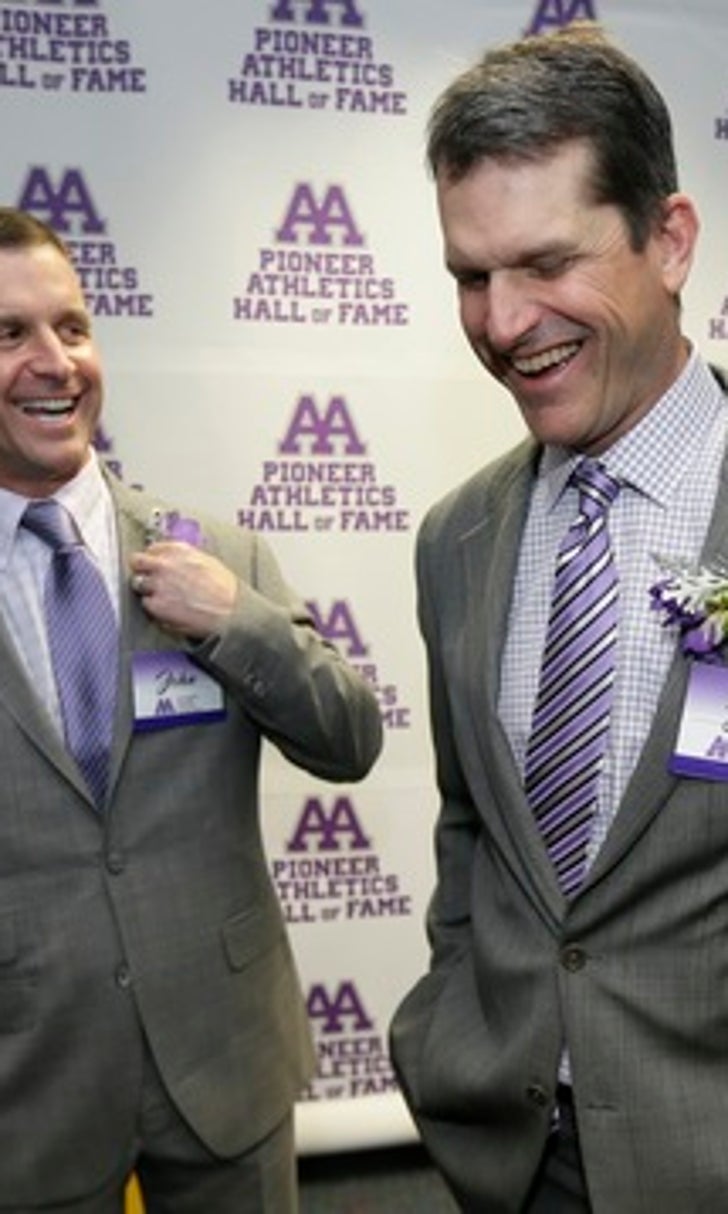 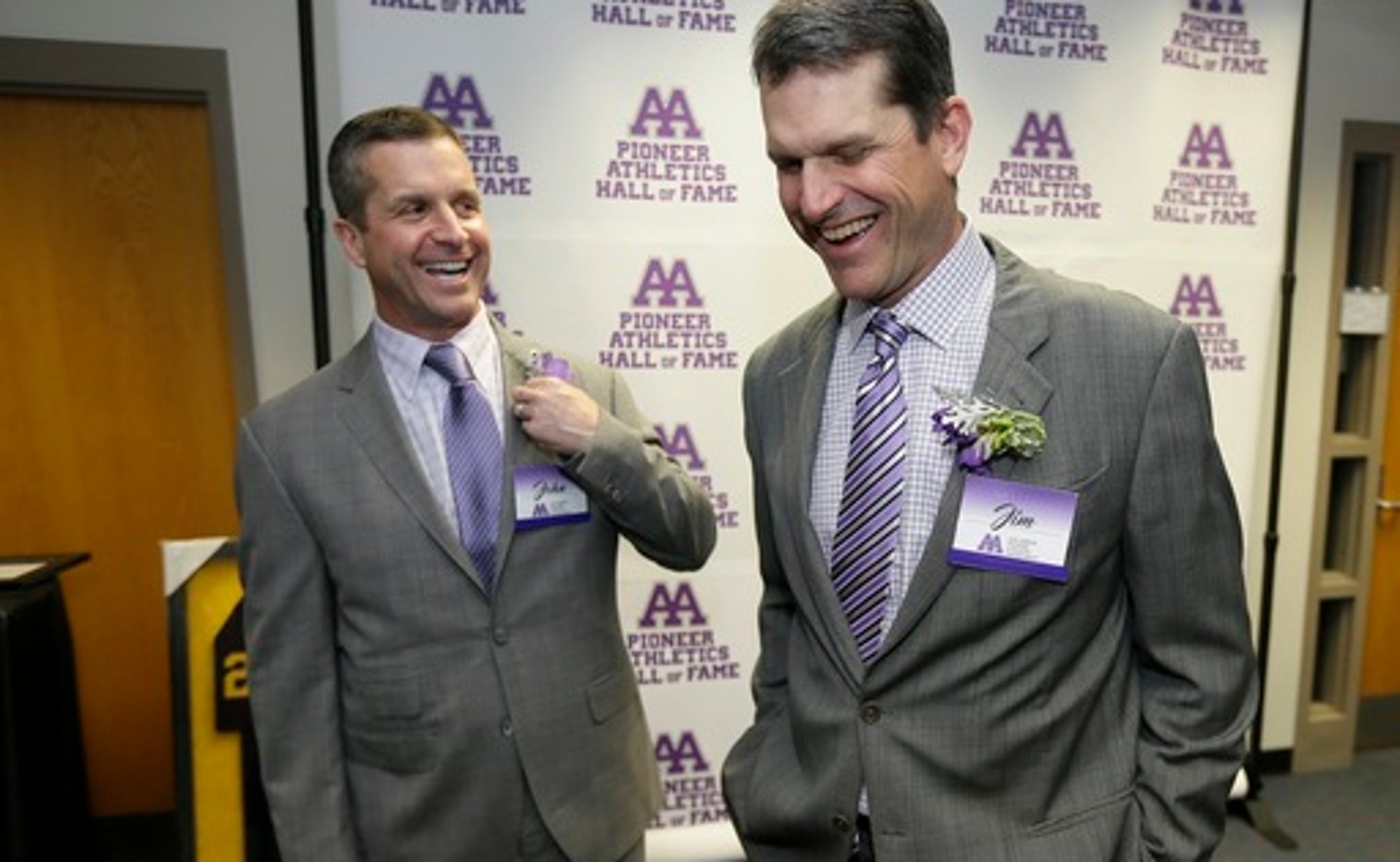 The Harbaugh brothers enjoy a day and an honor back home 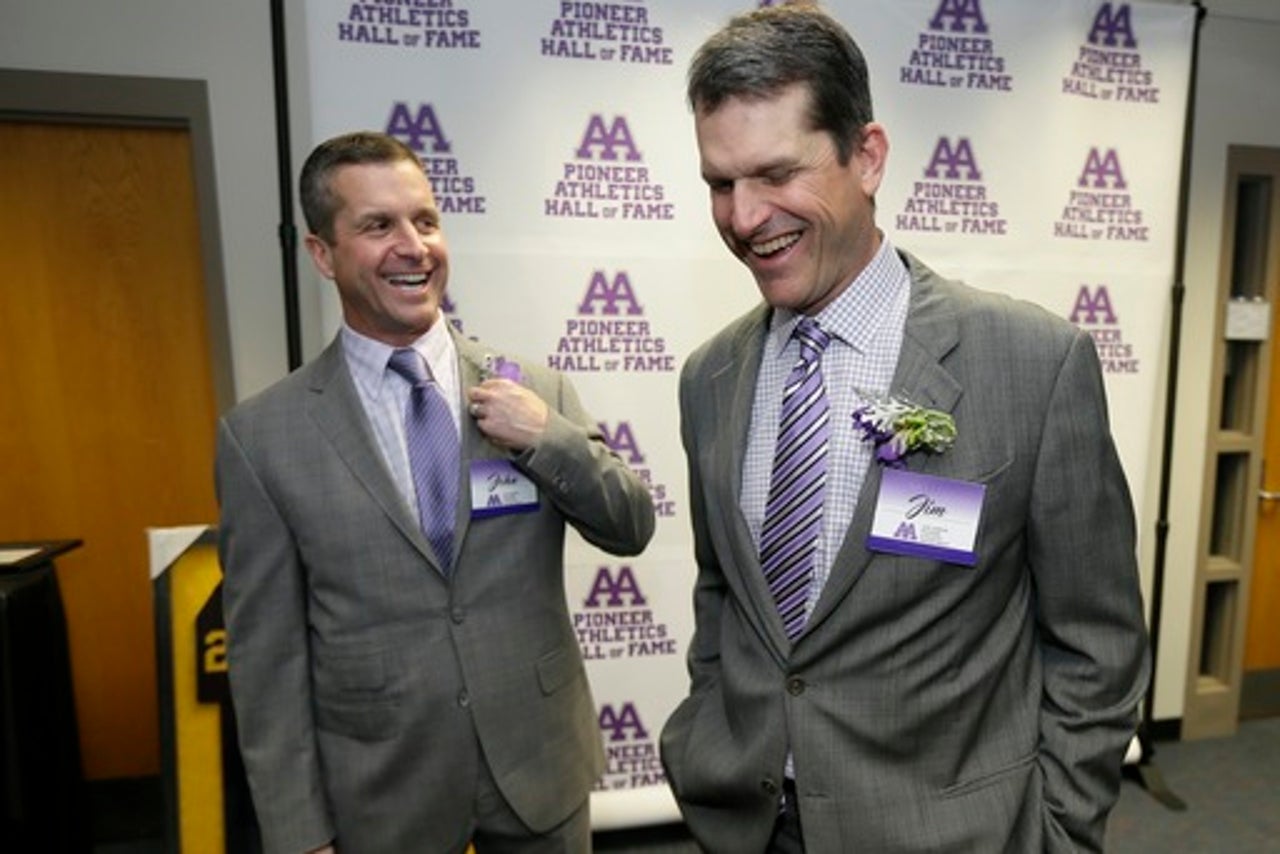 ANN ARBOR, Mich. (AP) John Harbaugh picked up a life-sized cutout of himself and set it next to an undersized likeness of his younger and taller brother, Jim Harbaugh.

The brothers, the Baltimore Ravens and Michigan coaches, were in their hometown Friday and soaked up every moment.

Yes, a lot of people showed up and paid $100 per ticket to hail the Harbaughs for the athletic department's fundraiser.

The Harbaughs and their father spoke at a coaching clinic earlier in the day at Michigan, informing and entertaining 2,000-plus coaches. Later, they went across the street from the Big House to get inducted into the Pioneer Athletic Hall of Fame.

Jim Harbaugh changed out of his game-day gear - khakis with a blue pullover tucked in and a blue hat - and into a suit for the induction ceremony.

''When you come back to where you grew up, where you became a man, this moment is something you'll remember for the rest of your life,'' John Harbaugh said. ''This honor means more to me than anything.''

Of course, he would probably acknowledge beating his brother three years ago to win the Super Bowl when Baltimore beat the San Francisco 49ers 34-31 was pretty special.

That day, and result, was referenced at least twice by the brothers with Jim Harbaugh mentioning it as one of the many things they did together.

''I think we shared the same room for 16 years of my life,'' Harbaugh said to about 500 people who were seated around tables on a basketball court.

John Harbaugh, who graduated from the high school in 1980, played football with his younger brother, who was a sophomore, toward the end of his senior season. And, they connected for a play their father fondly recalled nearly four decades later in part because of how his wife, Jackie, reacted.

''Out there at Hollway Field it was cold and wet and damp,'' said Jack Harbaugh, who was a Bo Schembechler assistant when his sons were growing up. ''Jim threw a pass and John caught a post route for about 15, 20 yards. And over the PA, `That pass was thrown from Harbaugh to Harbaugh for 15 yards' and Jackie had tears running down her face.''

No tears seem to be shed Friday as the brothers walked down memory lane.

''I remember getting hurt and missing the first seven games of the season,'' John Harbaugh recalled. ''Jim came in as a quarterback as a sophomore and was killing it, playing great. And then getting a chance to finally play the last two weeks and catching a couple passes was pretty cool.''

The only relatively serious moment of the day came when John Harbaugh backed his brother, whose innovative ideas have caught the attention of and drawn criticism from conference commissioners and NCAA President Mark Emmert.

''They're having a hard time being students and doing what students want to do,'' Emmert said when asked about Harbaugh taking his team to Florida during spring break.

John Harbaugh said that's one of the foolish things that have been said about the way his brother is leading.

''The president of the NCAA - I'm my opinion - he probably regrets a lot of what he said,'' John Harbaugh said. ''There are a lot of things to be worried about in this world, this country, and if you're going to take a moral position on something and you're going to take a stand for what's right, I don't think it's spring break.''

Jim Harbaugh said he has heard some people referring to the program he's leading becoming like a circus. And, he doesn't mind.

''We take that as a compliment,'' he said with a smile.

As much as the brothers tease each other, they clearly are close as their words and body language showed while talking about going into the Pioneer Athletic Hall of Fame.

''It's like so many things we've done together,'' Jim Harbaugh said. ''We've done a lot of cool stuff together.

''This is a shining star day

Lifting Their Voices
On Martin Luther King Jr. Day, Bubba Wallace and other athletes reflected on using their platforms for social justice.
10 hours ago