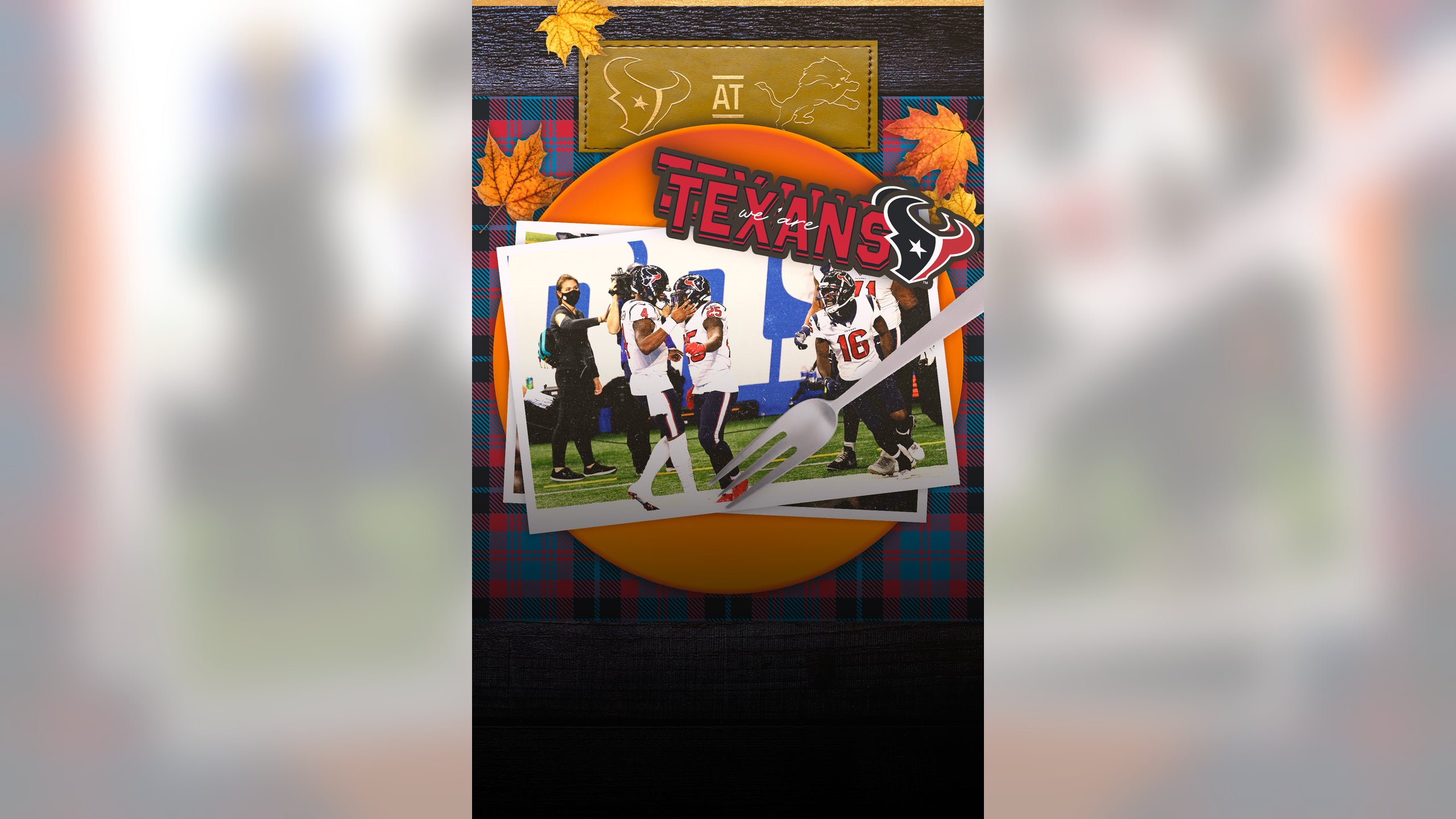 In their second-ever Thanksgiving game, the Houston Texans tore into the Detroit Lions, 41-25.

Deshaun Watson had a monster game for the Texans, while J.J. Watt came up with a huge defensive touchdown to swing momentum in Houston's favor early.

Here are some takeaways from the first game of Thanksgiving Day 2020.

Houston's 25-year-old quarterback was darn near perfect against the Lions. 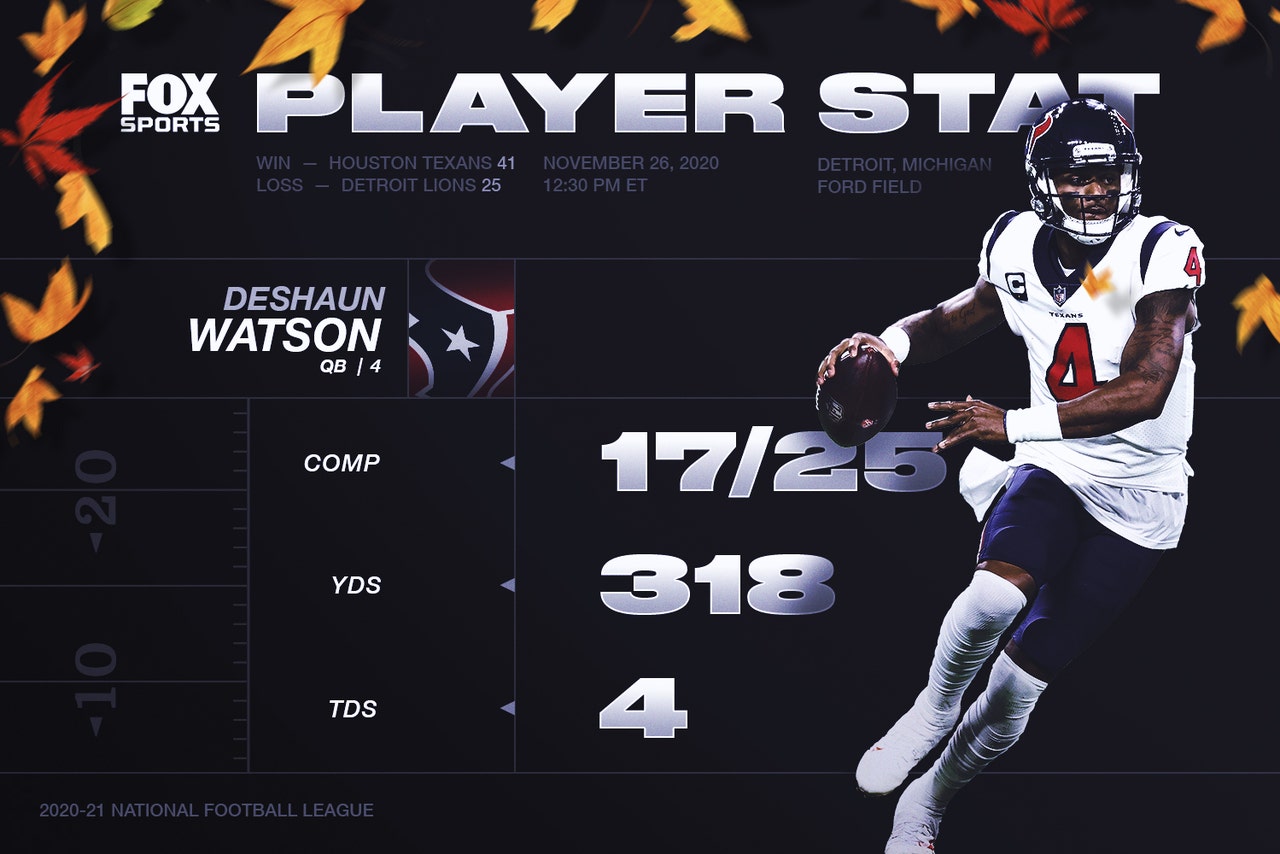 Watson hooked up with Will Fuller six times for a whopping 171 yards and a pair of touchdowns, including two deep bombs ⁠– one of which was a beautiful display of deception.

Houston's star QB finished 17-of-25 for 318 yards and no turnovers, while also scampering for 24 yards on the ground. Thursday's performance was the latest in yet another string of stellar performances.

The first half featured some rather sloppy offensive play – or if you're an optimist, steller defensive intensity. The Lions took an early lead, but then the ball became kryptonite for the offense, highlighted by an impressive pick-six for Watt.

Then, Lions running back Jonathan Williams fumbled on the first play of the next offensive possession for Detroit.

After Houston scored to push the score to 13-7, Detroit put the ball on the turf yet again following a successful challenge from Houston.

The Texans then responded with a fumble of their own, which the Lions turned into an Adrian Peterson touchdown.

Pies might be the dessert du jour at most Thanksgiving tables, but turnovers were being served early and often at Ford Field.

Speaking of AD, he banged in for a touchdown in the first quarter to join Marcus Allen as just the second running back aged 35 or older to score on Thanksgiving.

Peterson finished up with 15 carries for 55 yards and two scores. His quarterback, Matthew Stafford, had a so-so day at the office, but he did match a Thanksgiving Day record.

Stafford checked in with 295 yards, one touchdown and a pick on 28 of 42 passing attempts.

His touchdown pass in the fourth quarter to Mohamed Sanu tied Tony Romo ⁠— who was calling the game for CBS ⁠— for the most touchdown passes thrown on Thanksgiving.

And Watt's pick-six put him in some primetime company.

Terri gets her Truck
Terri from Maryland scored Terry's brand-new truck last week, and you can be the big winner this week by downloading Super 6!
30 mins ago

Just How Valuable is Patrick Mahomes?
With the Chiefs star's status still in question, Sammy P asked the experts how much each remaining QB matters to the spread.
4 hours ago

Nick Wright Pays His Dues
"Bills Mafia" continues to win, and Nick Wright finally paid up on his bet, with his condiment shower on full display.
5 hours ago

Tipping Point
With the recent departure of Seattle's pass-friendly OC, what does the future hold for superstar QB Russell Wilson?
7 hours ago

Rivers Retires After 17 Seasons
After 17 years in the NFL, Philip Rivers is calling it a career. Is the Hall of Fame next for the trash-talking fan favorite?
10 hours ago
those were the latest stories
Want to see more?
View All Stories
Fox Sports™ and © 2021 Fox Media LLC and Fox Sports Interactive Media, LLC. All rights reserved. Use of this website (including any and all parts and components) constitutes your acceptance of these Terms of Use and Updated Privacy Policy. Advertising Choices. Do Not Sell my Personal Info