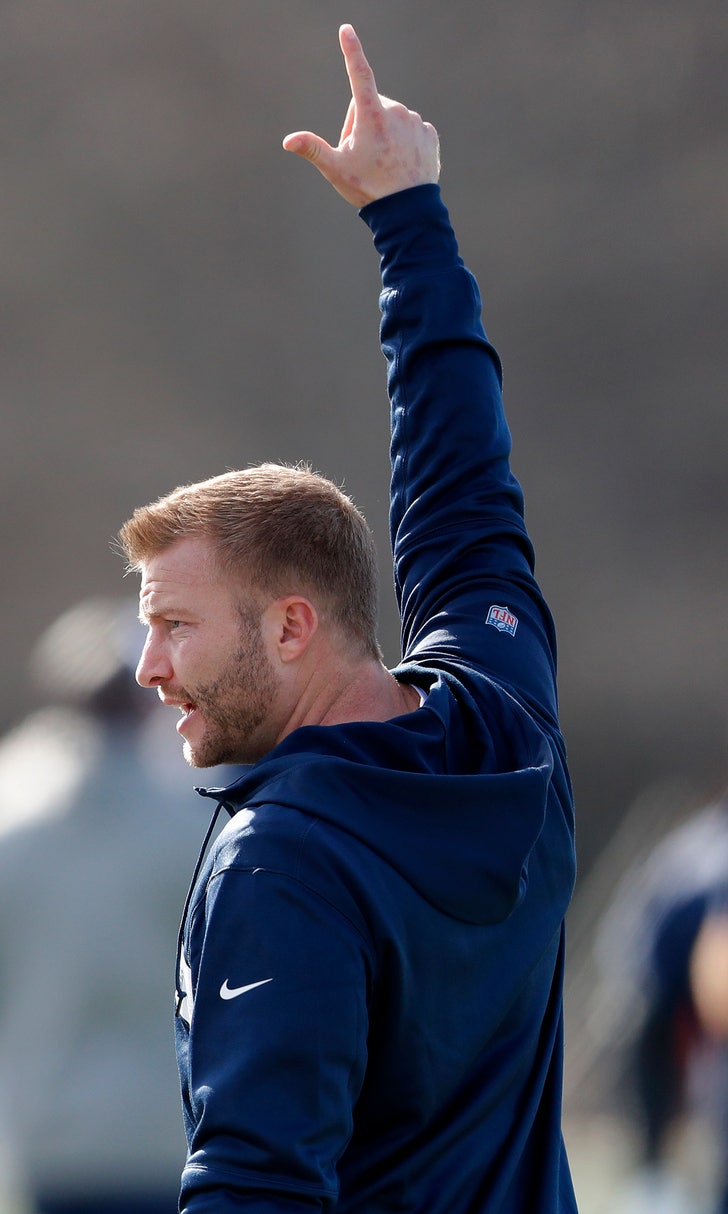 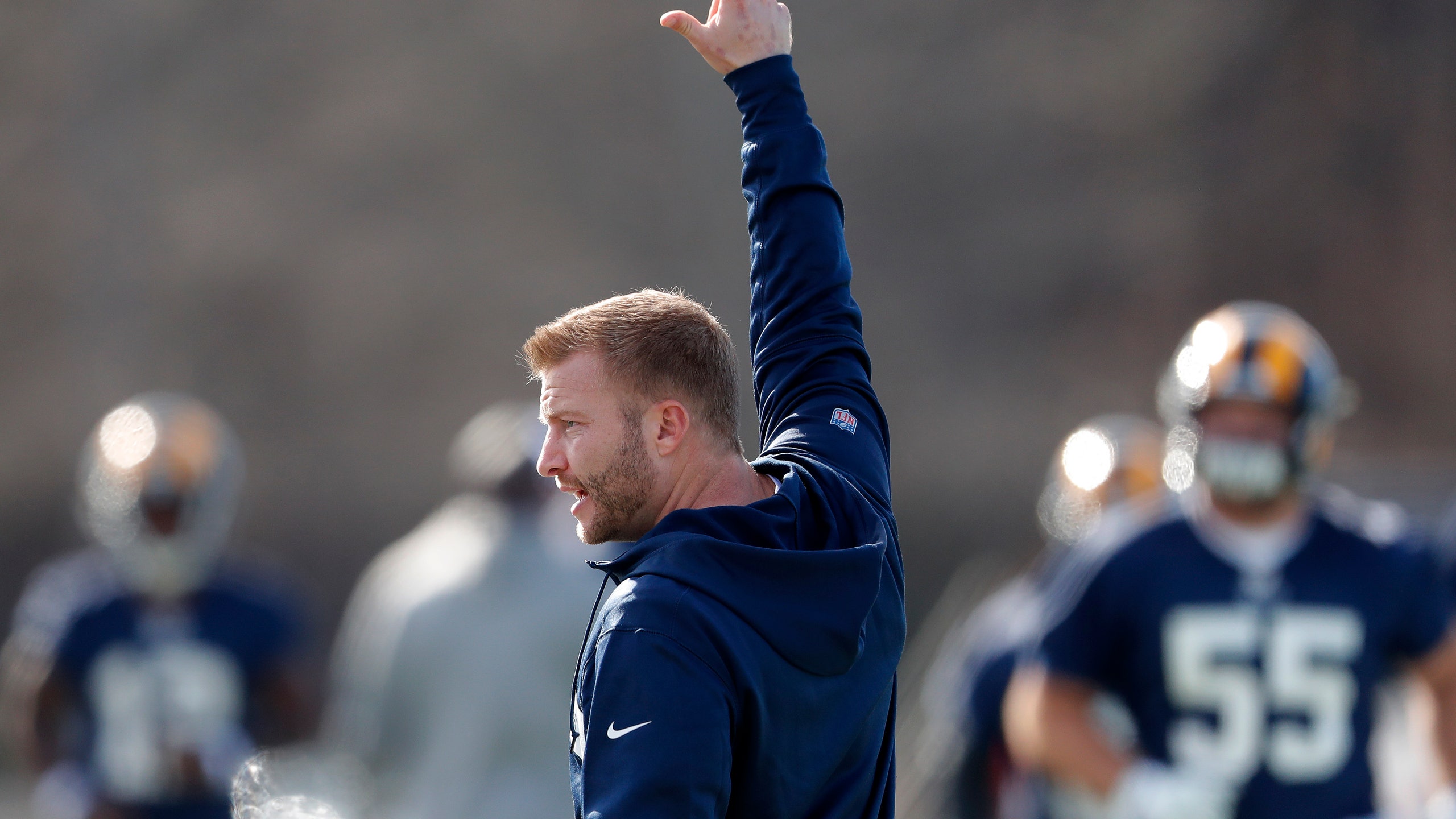 Super Bowl a homecoming for McVay, who grew up in the ATL

ATLANTA (AP) — They still talk about that play at the Marist School.

If there was ever any doubt that Sean McVay was a coach-in-the-making, it should've ended that night back in 2003.

"He was special," said Alan Chadwick, who was McVay's high school coach at Marist. "He had a lot of insight at a young age."

The Super Bowl represents a homecoming of sorts for McVay, who was born in Ohio but spent his formative years in the Atlanta area. From seventh through 12th grades, he attended the private Catholic prep school on the northern edges of the city. It is an elite institution that has turned out everyone from longtime Miss America host Bert Parks to Turner broadcaster Ernie Johnson Jr. to a lengthy list of athletes who went on to play professional sports.

McVay has joined the honor roll of famous alumni, a 33-year-old phenom of a coach who will lead the Los Angeles Rams against the five-time Super Bowl champion New England Patriots on Sunday.

He still looks back fondly on his time at Marist, where he was the starting quarterback for two seasons, leading the War Eagles to a 26-3 record and the Class 4A state championship in 2003.

"When you talk about you become the company that you keep ... great coaches, great teachers, great people, with some of the closest friends that I still have to this day, just the values that they instilled in me and learning how to just handle things like a man, how you listen, learn and then you lead, I was so fortunate to have that experience at Marist," McVay said this week. "I wouldn't be who I am today without having had that opportunity."

Wham Naked was like a culmination of that experience.

During McVay's senior season, the War Eagles faced what Chadwick still remembers as the toughest test of their title run, taking on undefeated Shaw in the quarterfinals of the state playoffs.

With the clock winding down, Marist trailed by five but drove deep into Shaw territory. With the War Eagles facing a third-and-goal from the 3, Chadwick called timeout, bringing McVay over to the sideline.

"We start talking about plays," said Chadwick, who is still the head coach at Marist after 34 seasons. "The offensive coordinator and myself, we're talking about what plays we could potentially run. Sean just kind of interjects. He says, 'Let's run Wham Naked.' We kind of look each other, shake our heads, shake our shoulders and say, 'OK, go with it.'"

McVay took the snap out of the wishbone formation and feigned a handoff to the left halfback slicing over right tackle. The entire offensive line went that way. Everyone went that way. The Shaw defenders were so certain they had stopped the runner, a couple of them actually began celebrating.

Only one problem: McVay had kept the ball, pulling it tight to his stomach, with his back to the line, in order to pull off the ultimate fake. There wasn't anyone within five yards of him as he sauntered across the goal line, calmly flipped the bar to one of the officials, and thrust his arms in the air while waiting to celebrate with his late-arriving teammates.

But McVay wasn't done. He had played defensive back during his Marist career, so Chadwick sent him in as insurance with Shaw still hoping to pull out the victory.

On a long pass down the field, McVay stepped in to make the game-clinching interception.

A couple of weeks later, in the state championship game, McVay guided the War Eagles to a 21-0 lead before sustaining a foot injury midway through the second half. He was limping noticeably but there was no way he was coming out of the game. Chadwick scaled back the offense, basically limiting McVay to handing off or pitching the ball, and Marist prevailed 21-6.

Only after the game was it determined that he had a broken foot.

Chadwick wasn't all that surprised. He knew McVay was tough as nails the first time he saw him at a summer coaching camp.

There was no contact. It was merely flag football.

"He collided with somebody and got his nose broken," Chadwick said. "So he went home that day — and he came back the next day. And I thought, 'Man, this is something for a young kid.' I wouldn't have come back. ... I wouldn't have wanted to come back. But he did."

McVay was a natural-born leader, the sort of player everyone on the team gravitated to. He was fast. He was fearless. He was smart.

Long after McVay had graduated, Chadwick learned that his former quarterback had several books on leadership that he read in his spare time. McVay was preparing himself for life after Marist.

"The intangibles he had as a leader — to direct a huddle, direct an offense, understand the game — those kids would just follow him anywhere," Chadwick recalled. "They believed in him soooo much."

He proudly holds up a football that McVay signed for him, which holds a place of prominence in the coach's tiny office overlooking the football stadium.

"Proud to be part of the Long Blue Line," McVay wrote, referring to another nickname for the War Eagles. "Sean McVay. Class of '04."

Come Sunday, people at Marist will be cheering for one of their favorite sons, hoping he can find a way to knock off Bill Belichick (the Patriots' twice-as-old coach) and Tom Brady (the quarterback who is actually eight years older than the Rams' leader).

Don't bet against the guy who really blossomed about 15 miles north of Mercedes-Benz Stadium.

"The scoreboard will take care of itself," said Tommy Marshall, the school's longtime athletic director. "Those relationships last a lifetime."

What Is Rams vs. Packers? An Elite Clash
He'll soon fill in for Alex Trebek (no, really). First, Aaron Rodgers and the Packers must face down the NFL's top defense.
January 15

How To Win $250,000 On Rams-Packers
Will the Rams be able to slow down the Pack? If you make the right choices, you could win big in the Super 6 contest.
January 15
those were the latest stories
Want to see more?
View All Stories
Fox Sports™ and © 2021 Fox Media LLC and Fox Sports Interactive Media, LLC. All rights reserved. Use of this website (including any and all parts and components) constitutes your acceptance of these Terms of Use and Updated Privacy Policy. Advertising Choices. Do Not Sell my Personal Info