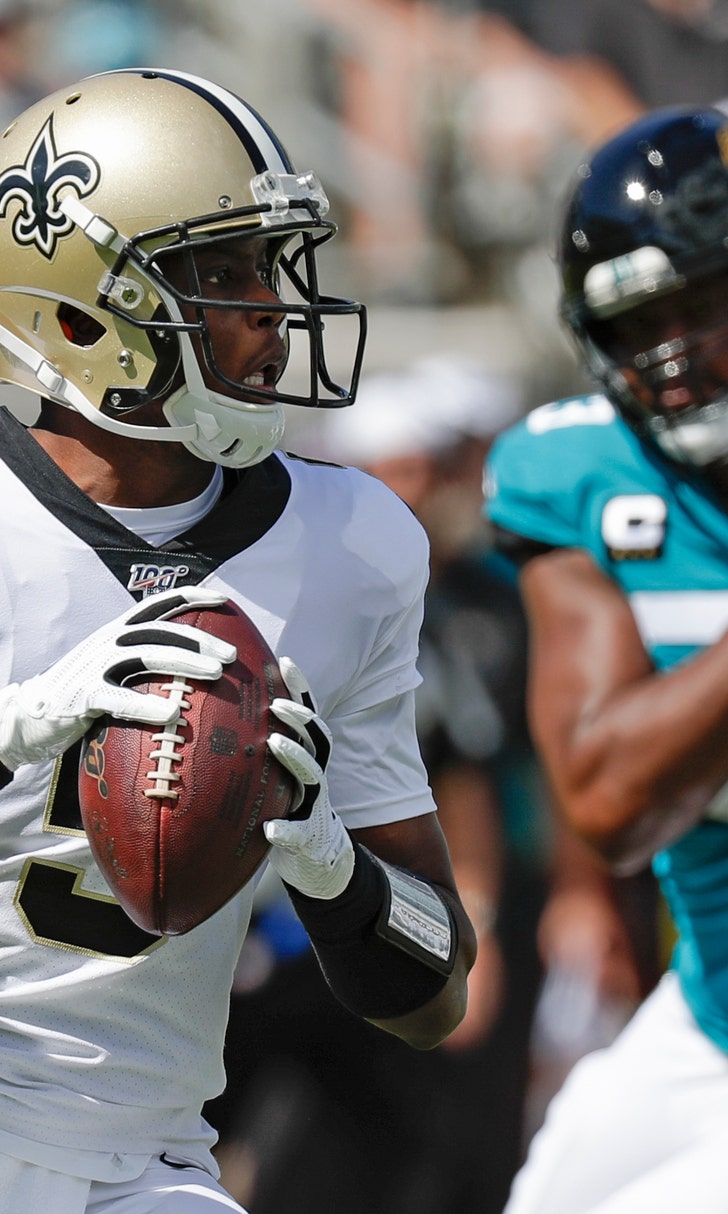 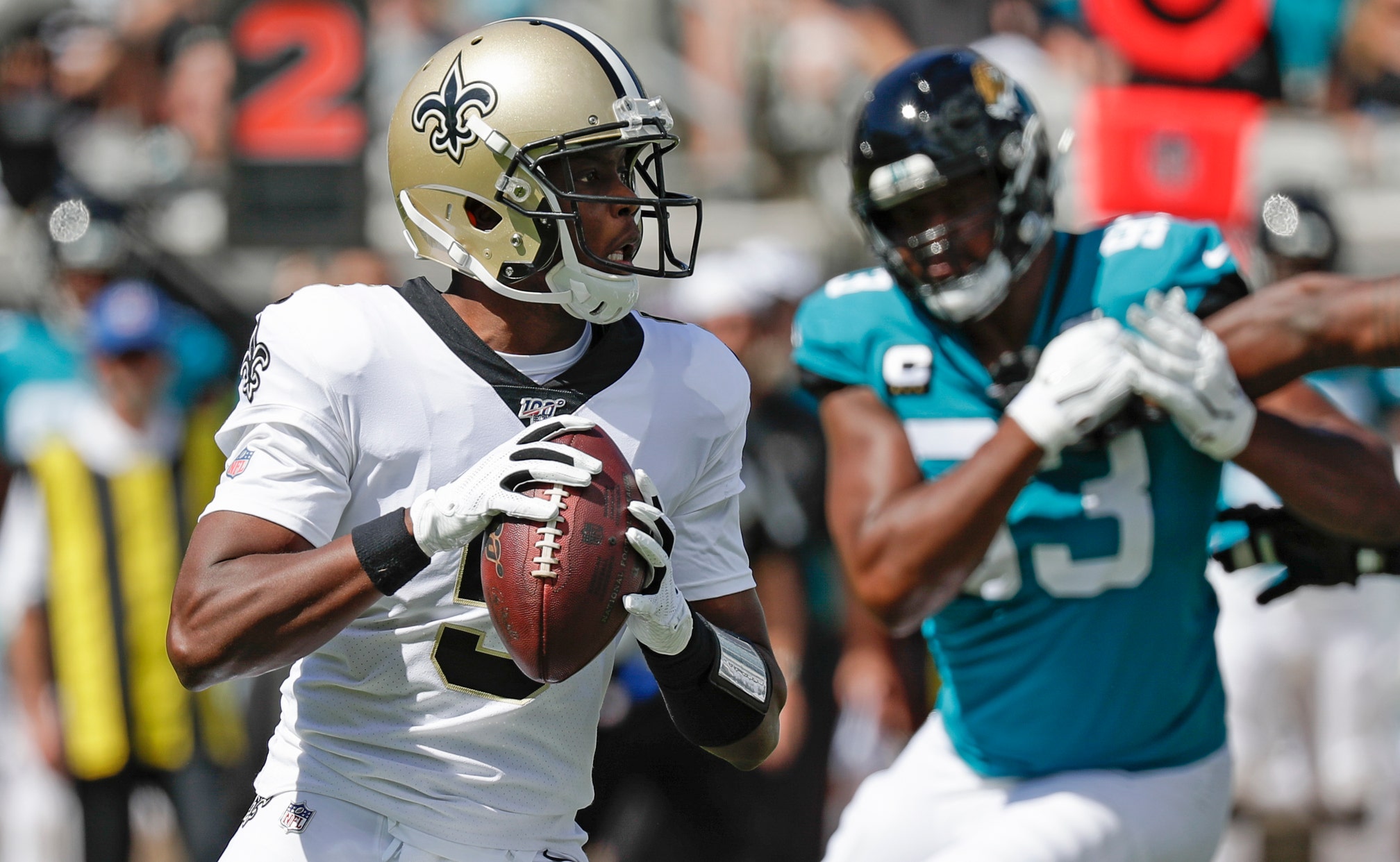 Saints look to keep rolling with Bridgewater against Bears

LAKE FOREST, Ill. (AP) — The New Orleans Saints kept their sights set on a Super Bowl even after Drew Brees went down with an injury.

While their star quarterback continues to recover following thumb surgery, the NFC South leaders will try to remain unbeaten without him.

The Saints look to improve to 5-0 with Teddy Bridgewater as their starter in Brees' place when they visit Khalil Mack and the Chicago Bears on Sunday.

"It just shows this is a team that's determined to win and do whatever it takes," Bridgewater said.

The Saints (5-1) are getting big contributions from their defense and special teams and enough from their offense even if they're not moving the ball the way they did a year ago. They're averaging 344.7 yards — down 34.5 yards per game from last season, when Brees made 15 starts. He's been sidelined since he tore a ligament in his right thumb during a loss to the Los Angeles Rams in Week 2.

Bridgewater has completed about 69 percent of his passes for 1,089 yards, seven touchdowns and two interceptions. He wasn't as effective last week at Jacksonville, after throwing for 314 yards and four touchdowns against Tampa Bay, but he hit Jared Cook for a tiebreaking 4-yard TD early in the fourth quarter against the Jaguars.

He will try to keep the Saints rolling against a team looking to bounce back. The Bears (3-2) are coming off a loss to Oakland in London two weeks ago in which their defense got pushed around a bit after dominating the first four games and their offense continued to struggle.

The Bears hope to get quarterback Mitchell Trubisky back after missing a game because of a left shoulder injury.

A game-time decision despite practicing all week without limitations, he'll try to build on a promising showing against Washington in Week 3 if he is available.

Trubisky threw three touchdowns in an easy win over the struggling Redskins after mediocre outings in a season-opening loss to Green Bay and a narrow victory at Denver. He was then injured on the opening drive against Minnesota on Sept. 29.

With 18 sacks, New Orleans is tied with Green Bay and Tennessee for sixth in the NFL.

Coach Sean Payton has been pleased by how depth along the front has helped keep linemen fresh and pressure high. While Cameron Jordan leads the club with five sacks, he's one of eight defensive linemen who've had at least half a sack. Payton said the Saints put an emphasis on improving depth on the defensive line after defensive tackle Sheldon Rankins, who was second on the club in sacks last season with eight, tore his Achilles tendon last January. That helped the Saints remain stout up front until Rankins returned in Week 4.

The Saints have not allowed a 100-yard rusher this season — or in 32 games, for that matter. They've also held their previous three opponents — Dallas, Tampa Bay and Jacksonville — to season lows in total yards.

While the Saints could be thin at running back with Alvin Kamara ruled out because of knee and ankle injuries, the Bears placed right guard Kyle Long and defensive tackle Akiem Hicks on injured reserve this week.

Long will miss the remainder of the season with a hip injury. Hicks could return after eight weeks from an elbow injury he suffered against Oakland. Both players have made the Pro Bowl — Long from 2013-15 and Hicks last year.

Saints rookie defensive back C.J. Gardner-Johnson has had a promising start to his career. And he is expected to be tested more this week because primary nickel back P.J. Williams was suspended two games for violating the NFL's substance abuse policy.

Johnson's biggest moment was a hit on Cowboys QB Dak Prescott on a delayed blitz that forced an interception on the final play of the Saints' 12-10 triumph over Dallas in Week 4.

While the Saints weren't sure which quarterback they'd be facing, several spoke highly of former teammate Daniel.

Rankins said Daniel — who played for New Orleans from 2009-12 and in 2017 — was always respected by the Saints' offensive brain trust: Payton and Brees.

"Coaches respected his opinion if he had an opinion on certain plays, or Drew would go to him about certain things, or they would converse back and forth about things they were seeing on the field," recalled Rankins, who was Daniel's teammate in 2017.

NFL's Top Plays of Week 3
The early window of Week 3 was a whirlwind of chaos, comebacks, and epic moments. Follow along, updating live.
18 hours ago