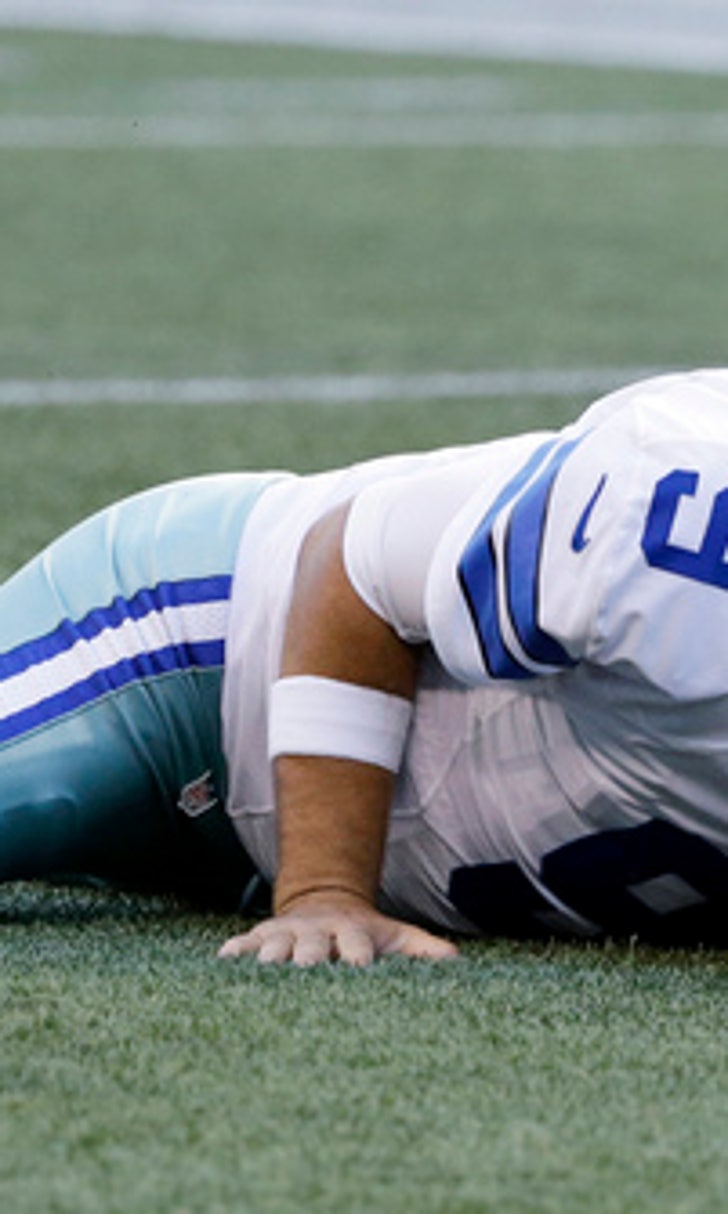 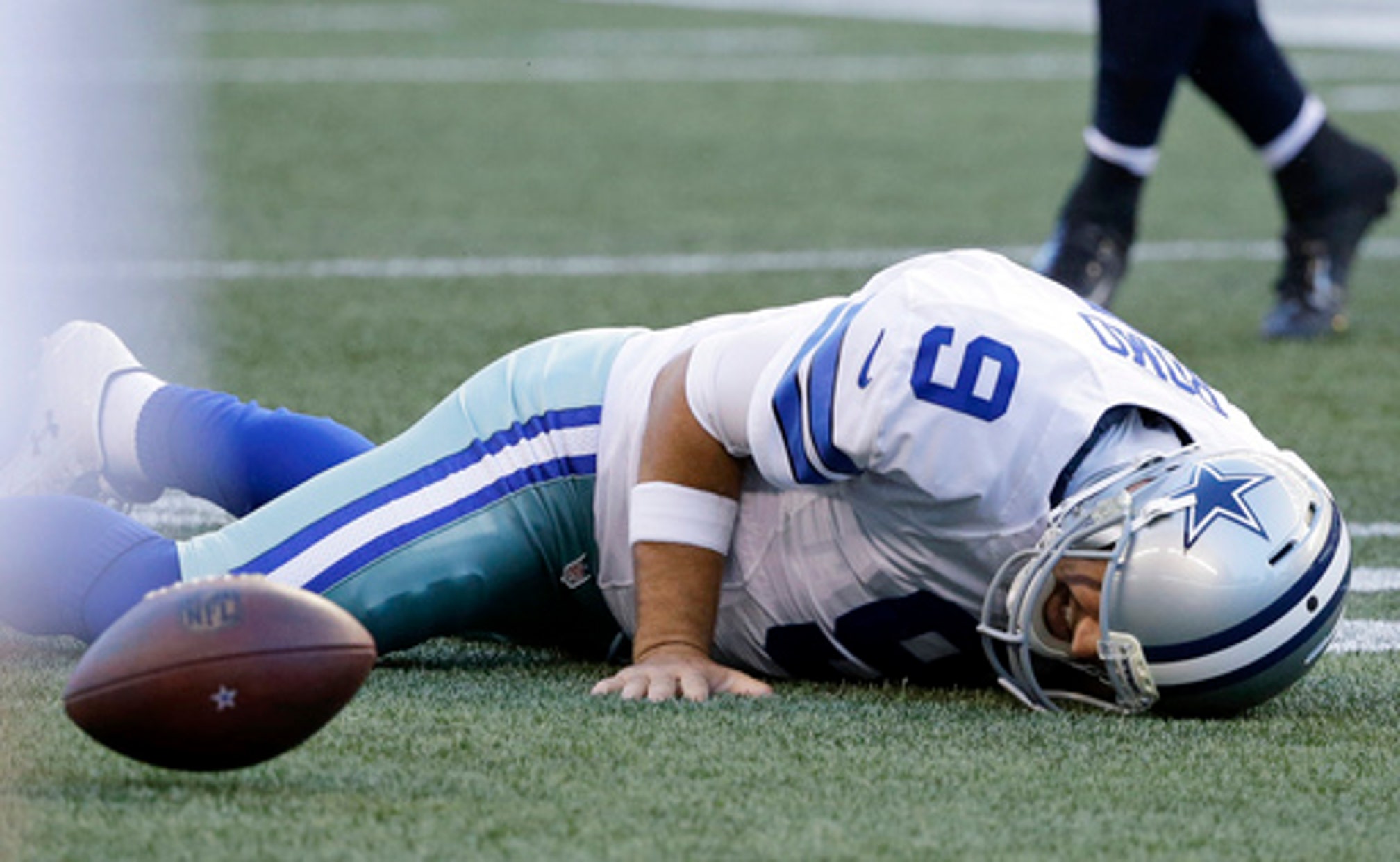 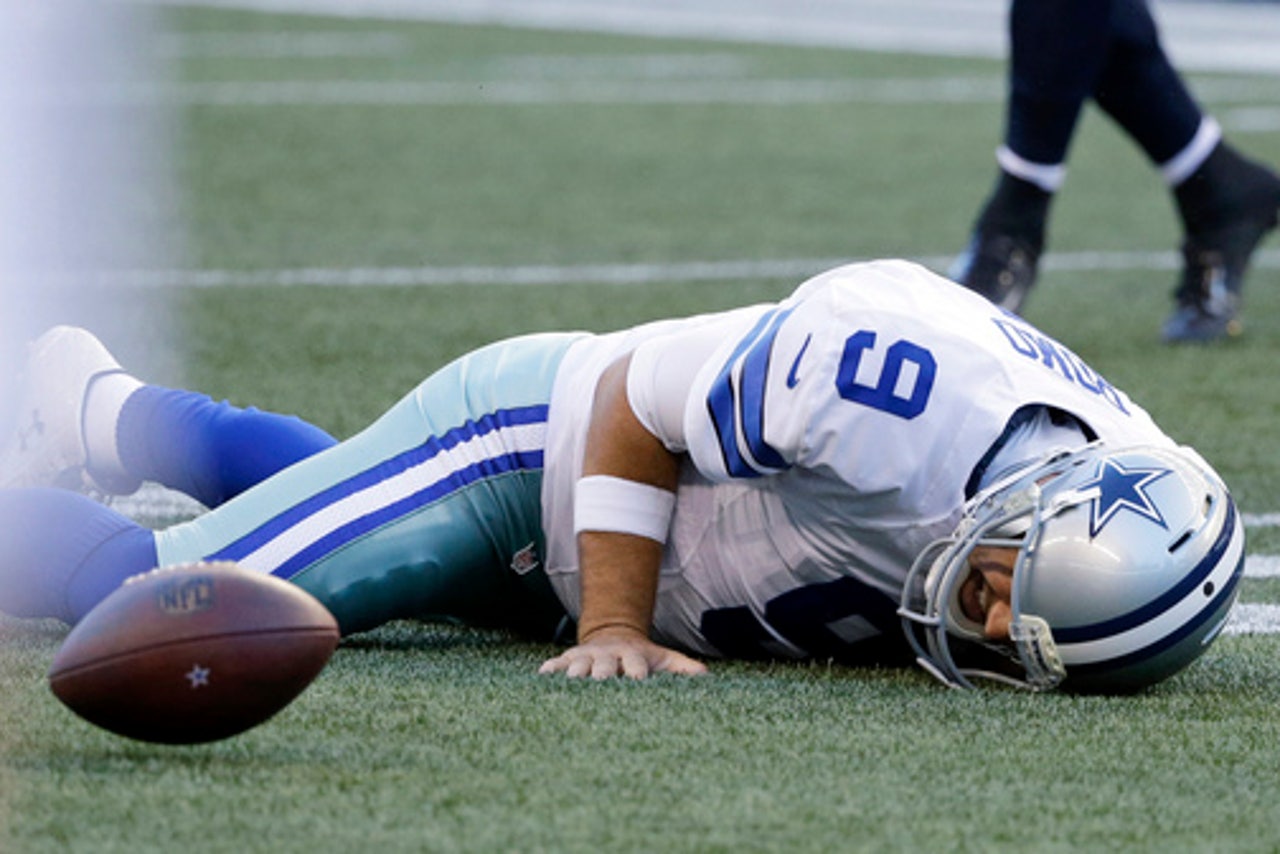 SEATTLE (AP) Three plays were all it took for Dallas to get yet another injury scare surrounding Tony Romo.

The quarterback lasted just 90 seconds into the Cowboys' 27-17 preseason loss to the Seattle Seahawks on Thursday night before leaving with what appeared at first to be a potentially significant injury, but ended up being minor.

Romo was tackled from behind by Seattle's Cliff Avril on the third play from scrimmage as Romo scrambled from the pocket.

He immediately grabbed at his back, crumpled on the field while trainers sprinted from the Dallas sideline and images of Romo's injury problems from last year immediately flashed to mind.

Turned out it was all just a scare. Romo walked off the field without assistance, threw passes on the sideline and lobbied for a return to the game. Dallas coach Jason Garrett opted to play it safe and Romo donned a baseball hat as a spectator the rest of the night.

''I was just in shock and had my mind on just, `C'mon, Tony. Get up,''' Cowboys owner Jerry Jones told the team's TV broadcast.

''Said a few prayers right there in the middle on the spot. Really just couldn't imagine getting that hand dealt to us. We're pleased that it's in good shape. We obviously don't need to see what Tony can do out there.''

What Romo saw was an impressive initial flash from rookie running back Ezekiel Elliott and a solid performance by backup QB Dak Prescott against one of the top defenses in the NFL.

Elliott rushed for 48 yards on seven carries, including a 13-yard run where he knocked Seattle safety Kam Chancellor backward. Prescott was solid playing against most of Seattle's starting defense, finishing 17 of 23 for 116 yards, including a 17-yard TD pass that Jason Witten snatched away from K.J. Wright.

Russell Wilson and Seattle's No. 1 offense played into the second half, scoring on four of its final five possessions including a pair of TD tosses by Wilson.

He found Paul Richardson on a perfectly placed 9-yard crossing route in the second quarter, then improvised, spun, scrambled and hit Tyler Lockett on a 9-yard strike midway through the third quarter on his final play.

Wilson finished 16 of 21 for 192 yards, while Christine Michael averaged 8.3 yards per carry as Seattle got its running game going in the second half.

Cowboys: Prescott is 39 of 50 for 454 yards, five touchdowns and no interceptions in his three preseason games.

Seahawks: Third-round pick C.J. Prosise got his first action of the preseason after being slowed by a hamstring injury. Prosise rushed for 23 yards on four carries and has been viewed as Seattle's best third-down option.

Seahawks TE Jimmy Graham did not play, but went through a full pregame workout and team warmups as he continues his recovery from a major knee injury.

''It felt great to finally get out there in a full speed game against somebody that's not our own team. It was great to get behind that offensive line, get that game feel, get my first real reps as a pro football player,'' Elliott said.

Eagles Rally Late, Beat Giants
Somehow, at 2-4-1, the Philadelphia Eagles are in sole possession of first place in the NFC East after Thursday's win.
2 hours ago

As Odell's World Turns
Odell Beckham Jr. has never been one to shy away from the spotlight. And this week has been no different.
8 hours ago