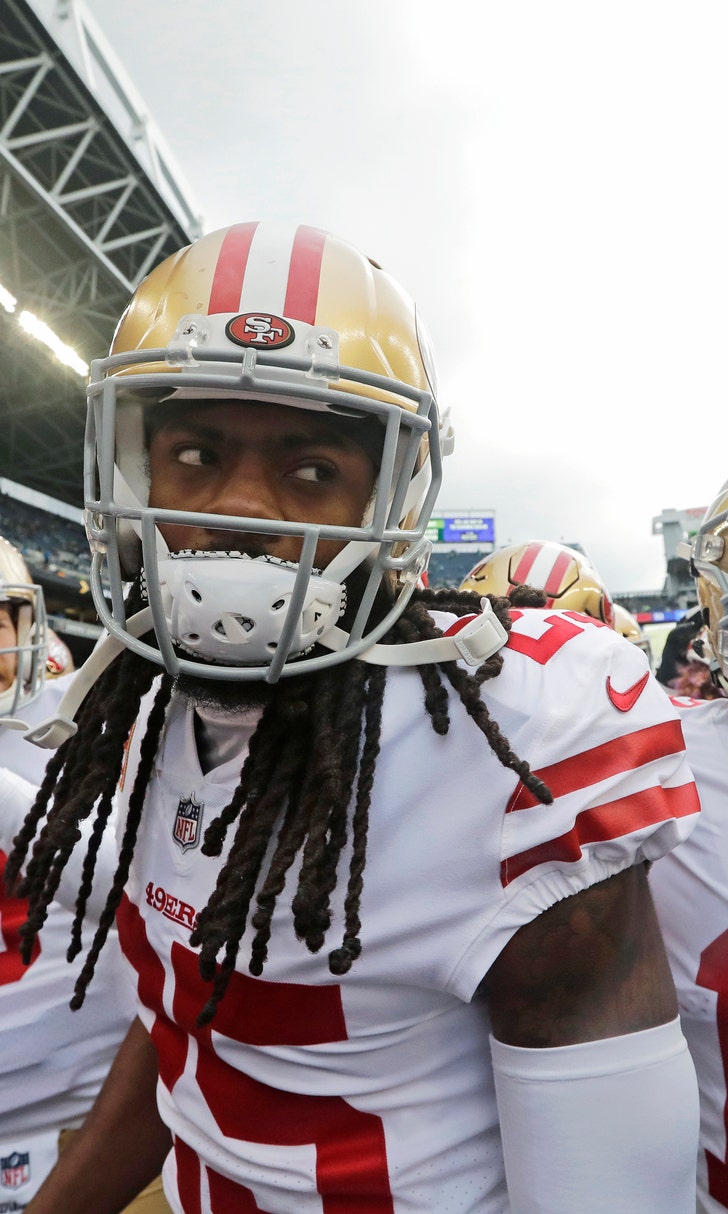 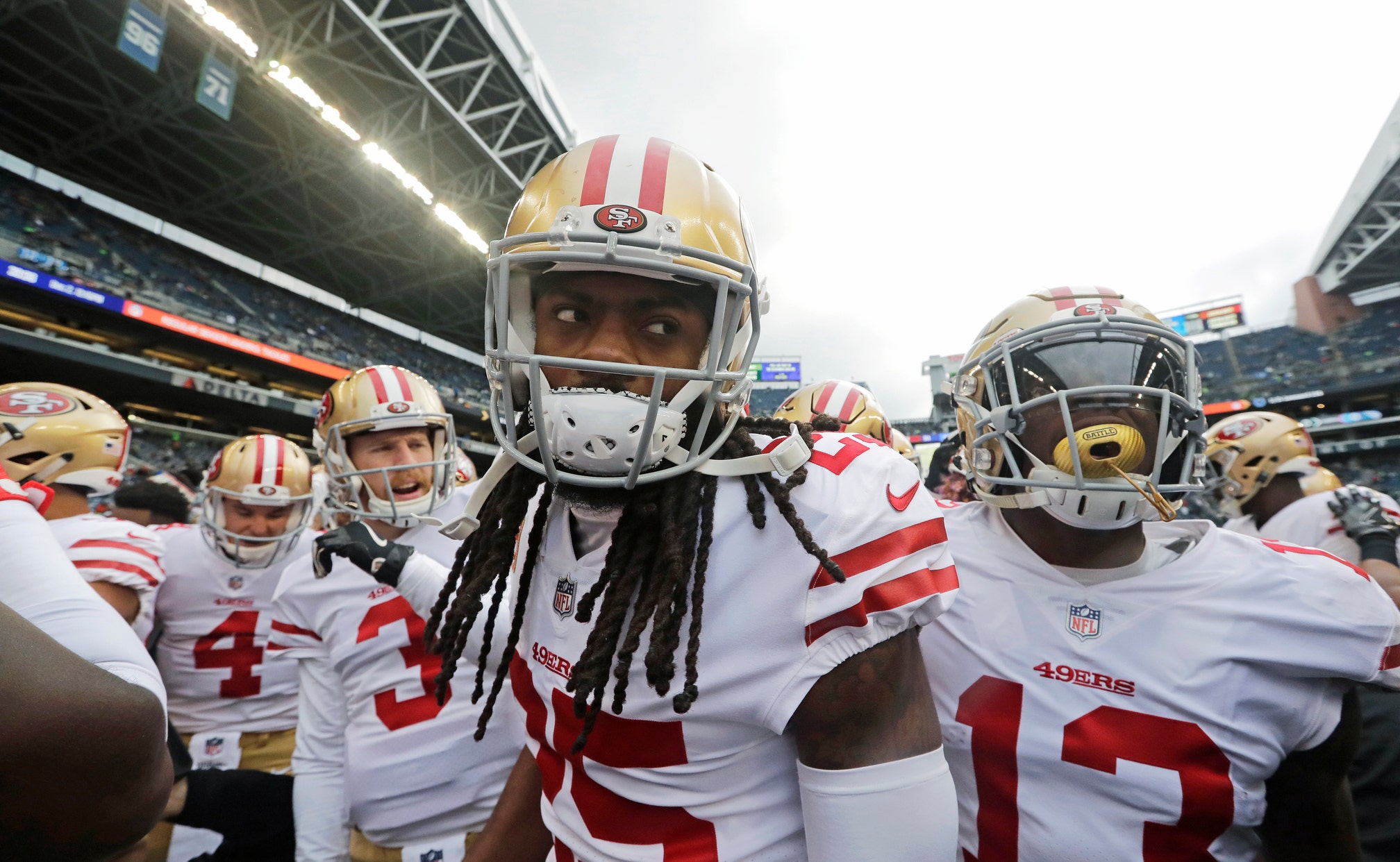 previous story
Encarnacion to Mariners, Santana to Indians in 3-team trade
next story
Giants’ Beckham to have further evaluation of injured quad

SANTA CLARA, Calif. (AP) — San Francisco cornerback Richard Sherman won't get as emotional about playing against Seattle this week as he did when the 49ers and Seahawks met two weeks ago.

All of that, Sherman insists, is water under the bridge now.

Sherman is so calm and cool this time around that he even smiled and chuckled quietly when asked about critical comments made about him by former Seahawks teammate Frank Clark following Seattle's 21-7 win over Minnesota on Monday.

Speaking to a small group of reporters, Clark said that the Sherman era was over in Seattle and that the veteran cornerback needed to worry about his own problems.

"Just seems like a guy who's probably tired of hearing the same questions," Sherman said Thursday. "I'd probably be pretty annoyed too if we won a game and somebody comes and asks me about a guy who wasn't either involved in this game or on my team."

Clark, a fourth-year defensive end who leads the Seahawks with 11 sacks, was responding to a question about a comment made by Sherman prior to the Nov. 2 game between the two teams in Seattle. At the time, Sherman said the Seahawks were a "middle of the road" team.

"That's just Richard Sherman being Richard Sherman," Clark said Monday. "He's not in this locker room no more so his opinion really doesn't matter. They've got some problems over there in San Fran that he needs to be worried about.

"This is my team now. This is my defense. Richard Sherman, his era is over here. If he's got anything to say about our defense, he can sat it on the field, at the end of the day."

Sherman tried to downplay the issue but was asked if it was an elephant in the room.

"It's like a mouse in the room," Sherman said. "It's like kids say the darndest things, you know? It didn't bother me at all. It's kind of weird but it doesn't bother me. The era was over in my mind obviously. I'm here."

Seattle is 8-5 and can clinch a playoff spot with a win over San Francisco on Sunday at Levi's Stadium.

Sherman and the 49ers, conversely, are putting the final touches on a disappointing 3-10 season.

It's Sherman's first year playing on a team with a losing record since his rookie season in 2011, when the Seahawks finished 7-9.

Unlike the first time he lined up across from the familiar faces in Seattle, Sherman isn't anticipating being very emotional when he sees the Seahawks on Sunday. He spent seven years in the Pacific Northwest before Seattle released him last March while Sherman was still recovering from an Achilles injury.

"The nostalgia of seeing your friends and seeing the personnel, all the guys that you played with (is over)," Sherman said. "In a couple weeks, I'll see them again. We'll be out of the season. We'll be doing vacations and stuff. It was cool being back in the stadium and everything. This time we'll be back home. We'll be grinding it out. We know how it went last time and got a sour taste in our mouth." 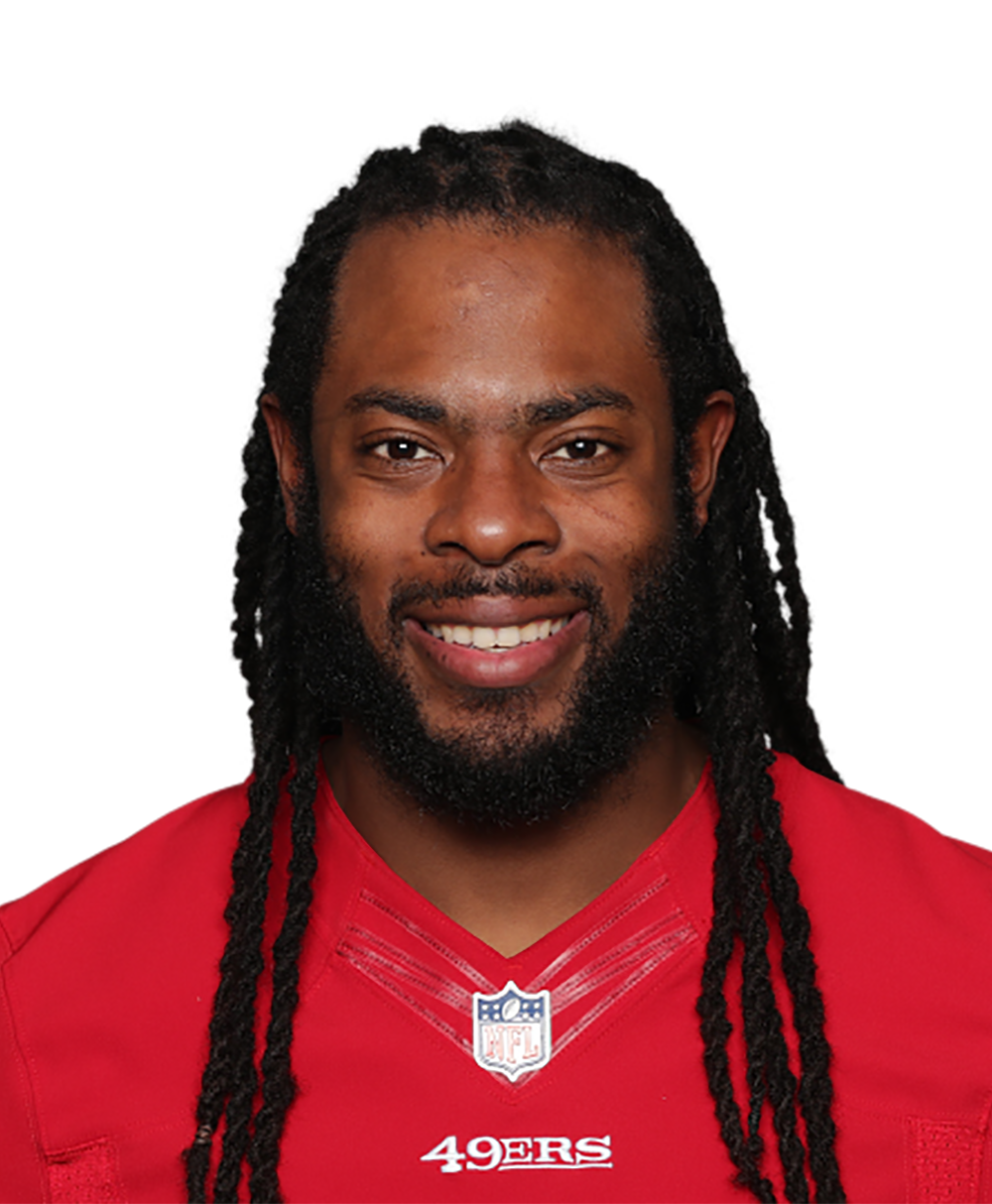