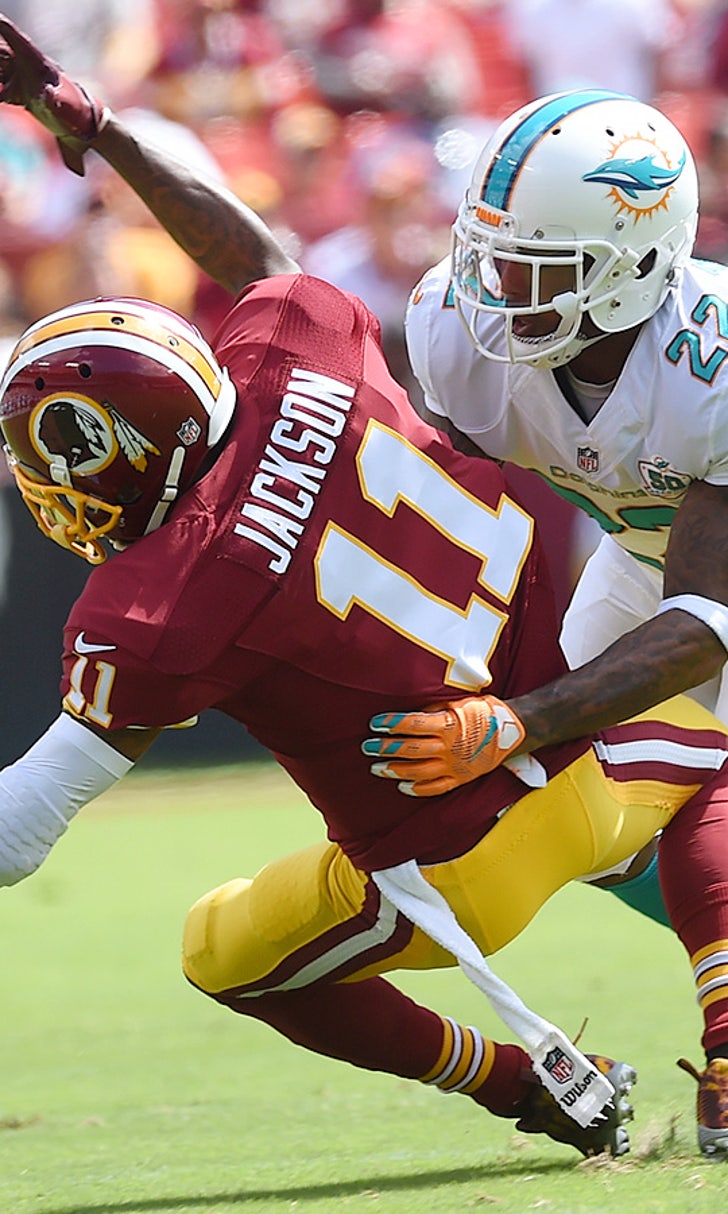 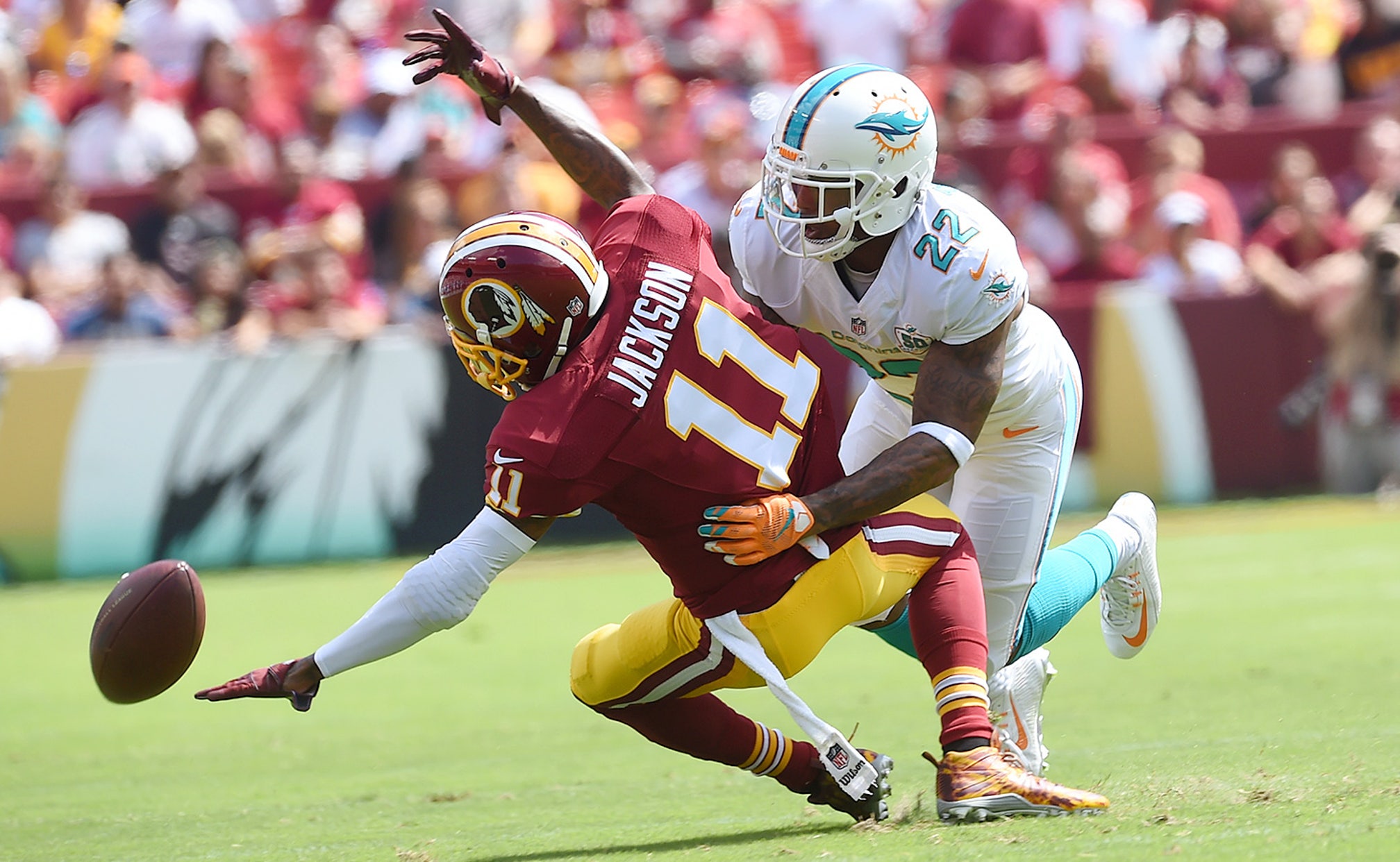 Redskins lose three starters, including WR Jackson for a month 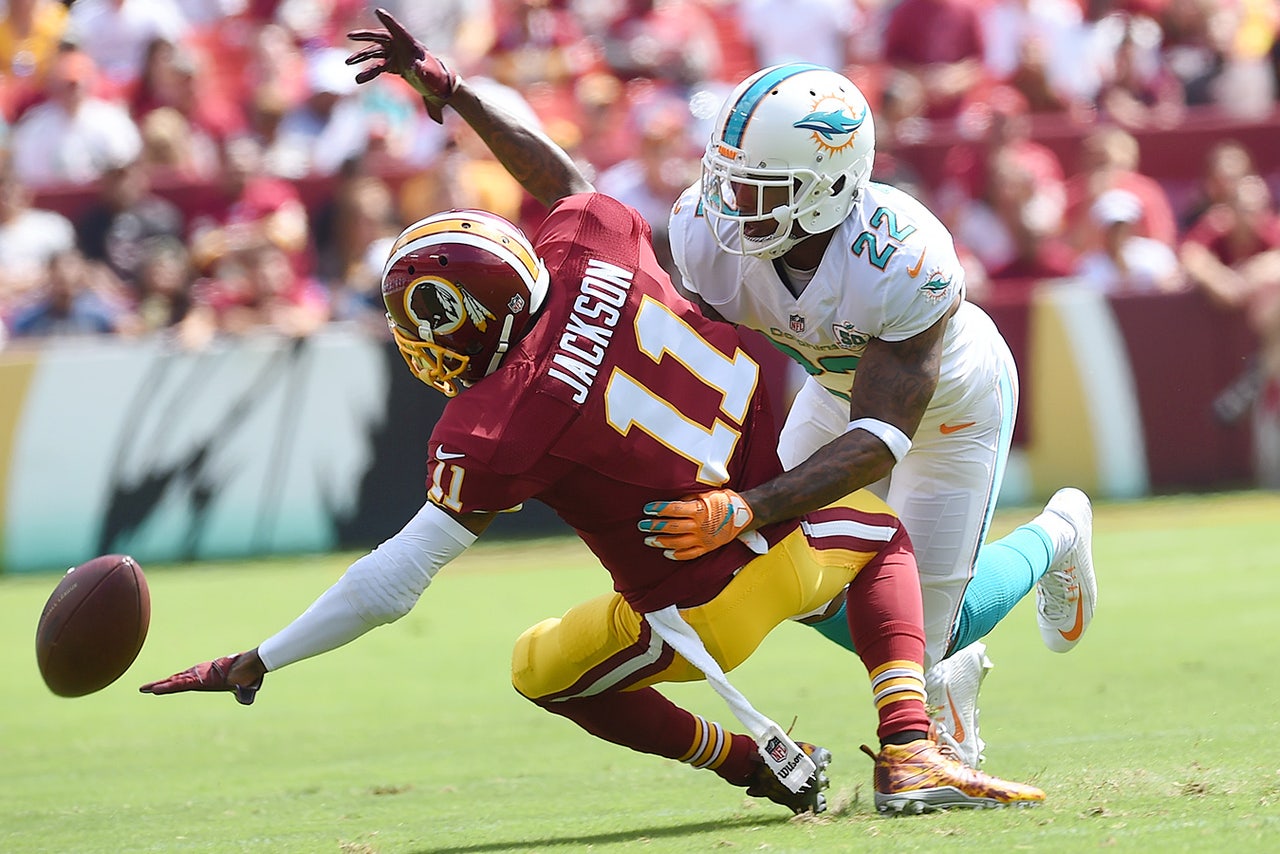 "Possibly, it could be shorter, but you just never know with hamstrings," coach Jay Gruden said Monday.

"You hate to lose a star, especially with his speed," Gruden said. "We feel good about the receivers that take his place, but nobody can substitute him for that burning speed that gets down field and scares safeties and corners to death."

Jackson is not the only unwanted change to the starting lineup for Washington (0-1) heading into Week 2 against the visiting St. Louis Rams (1-0).

Cornerback Chris Culliver was suspended by the NFL for next Sunday's game because he violated the league's personal conduct policy. The NFL did not say exactly why Culliver was punished. He was arrested in March 2014 on suspicion of felony hit-and-run and reckless driving.

And safety Duke Ihenacho will need surgery to repair a fractured and dislocated left wrist.

The Redskins also made a switch at kicker, releasing Kai Forbath and signing Dustin Hopkins in an attempt to improve the team's kickoffs.

Forbath made 87 percent of his field goal attempts (60 for 69) in three-plus seasons for Washington. But he only had 18 touchbacks last season, which was 31st in the 32-team NFL.

Gruden disagreed that Forbath's release was directly related to Washington's 17-10 loss to the Miami Dolphins on Sunday, when he missed a 46-yard field goal attempt and made a 45-yarder.

"We're not making Kai a scapegoat," Gruden said. "That's insane. What we're trying to do is improve our kickoff cover team and we're trying a young kicker who worked out here extremely well today."

Hopkins missed his 2013 rookie season in Buffalo with a groin injury. He was cut by New Orleans this month, and has yet to play in an NFL game.

Jackson was injured on the first play of Washington's second possession against Miami. He was trying to catch Kirk Cousins' deep throw to the right sideline.

The three-time Pro Bowler led the Redskins with 1,169 yards receiving and six touchdown catches in 2014, his first season in Washington after he was let go by the Philadelphia Eagles. His 20.9 yards per reception led the NFL.

A shoulder issue kept Jackson from playing in any games this preseason, but Gruden said it's unclear if that contributed to the receiver's current injury.

"He was still able to do a lot of running in that time," Gruden said. "So I don't think it really did (play a role). I think it was one of those things that happens to a wide receiver."

In other moves, the Redskins re-signed defensive end Frank Kearse after releasing him last week, and waived linebacker Houston Bates.