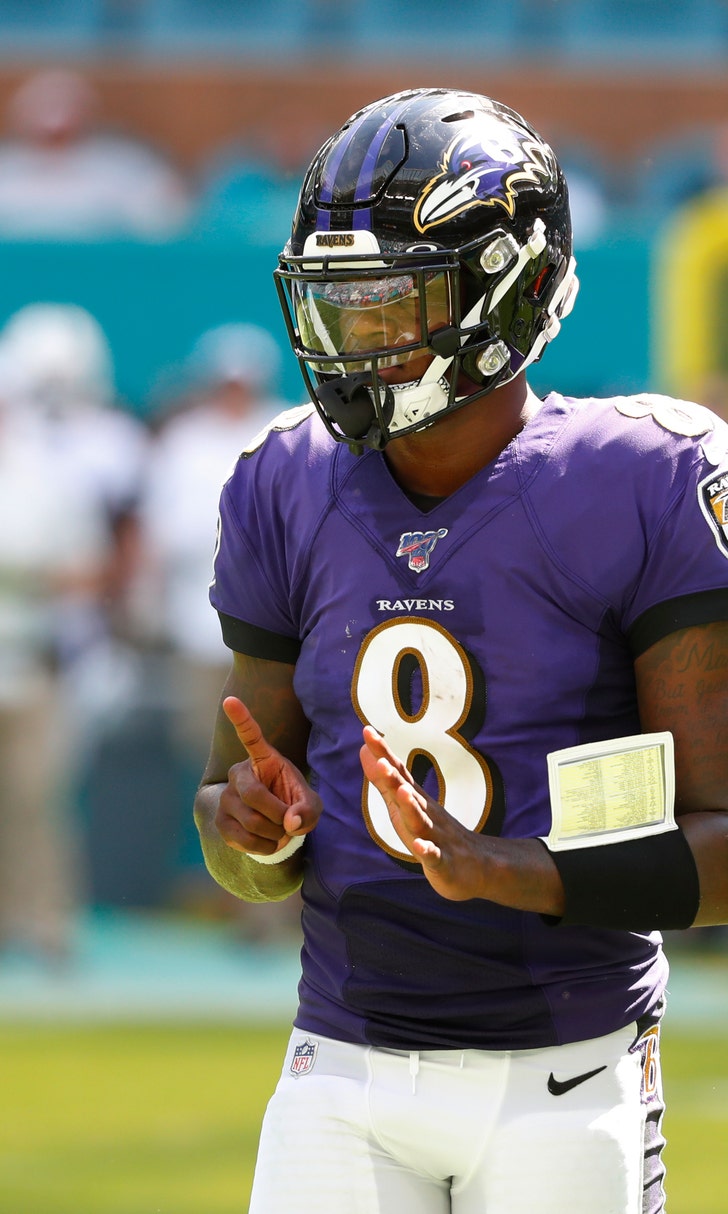 previous story
Post-AB life off to a bumpy start for Steelers
next story
LSU's Orgeron: Chaisson, Lawrence, Logan getting rest

Ravens off to record-setting start behind Jackson

OWINGS MILLS, Md. (AP) — The defending AFC North champion Baltimore Ravens stand alone atop the division after a near-flawless performance that would suggest their offseason changes only made them better than last year.

Far more noteworthy was the performance of second-year quarterback Lamar Jackson, who completed 17 of 20 passes for 324 yards and five touchdowns.

After making a solid first impression last year with his ability to run out of the pocket, Jackson proved quite adept at throwing from the pocket Sunday while executing plays drawn up by Ravens first-year offensive coordinator Greg Roman.

The 2016 Heisman Trophy winner ran only three times for 6 yards, but that doesn't mean the Ravens have restrictions on his downfield jaunts.

"If they allow Lamar to run, he's going to run," coach John Harbaugh said Monday. "They didn't. They were taking it away for sure. If people decide that that's going to be the way it's going to go, he's not going to run. That's the way the offense is organized."

Jackson's right arm did plenty of damage, and Ingram took care of the rushing duties by rambling for 107 yards and two touchdowns in his Baltimore debut.

Well, it's pretty obvious that the offense is quite effective. Baltimore set four franchise records Sunday, including points in a game , margin of victory, points in a half (42), and total yardage (643).

The defense did its part by limiting the Dolphins to 21 yards rushing and registering three sacks.

Pass rush was supposed to be an issue after the Ravens lost Terrell Suggs and Za'Darius Smith to free agency, but Miami quarterback Ryan Fitzpatrick was harassed for much of the afternoon.

"It was a group effort," Harbaugh said. "I'm really happy with it. We got a lot of pressure."

After watching the game film, Harbaugh didn't find too many flaws.

"It was really good, but there are many things to work on," he said. "The things that we did well, people are doing whatever they can do to stop. We have to stay ahead of that."

The Dolphins dared Jackson to pass, and he did. Quite successfully. Perhaps the Arizona Cardinals will try something different this Sunday.

"We'll be seeing new schemes," Harbaugh said. "The execution was very good, but it's going to need to a lot better going forward."

Brown missed much of the preseason while recovering from foot surgery, so it was uncertain how he would perform in his first NFL game. The former Oklahoma star erased all doubt by turning his first NFL catch into a 47-yard touchdown. His second catch went for 83 yards and a score.

"Everything I've been through this offseason, just to be able to be out there and make plays and help the team win, it felt pretty good," he said.

Gus Edwards, who took over at running back in the late stages of the 2018 season, is now second on the depth chart behind Ingram. Although Edwards received a team-high 17 carries Sunday, he averaged only 3.3 yards per carry — less than rookie third-stringer Justice Hill (3.9).

Smith has a Grade 2 sprain of the right knee. Harbaugh said the injury is "not a season ender by any stretch."

60 — How many yards Anthony Levine covered on a fake punt with Baltimore up 35-3 in the second quarter. Harbaugh insisted on talking about it Monday, just in case someone thought he was running up the score.

"The point is, and I know the Dolphins understand this, that the objective is to keep your offense on the field," Harbaugh said.

The Ravens welcome back an old friend Sunday in the home opener.

Suggs, who spent 16 years with Baltimore, returns after joining the Cardinals during the offseason as a free agent.

"The emotional part of it, I'm not going to worry about that," Harbaugh said. "It will be great to see him before the game and hug him and all that if I happen to see him. But once the game starts he's a Cardinal, and we'll be hoping to do the best against him that we can."