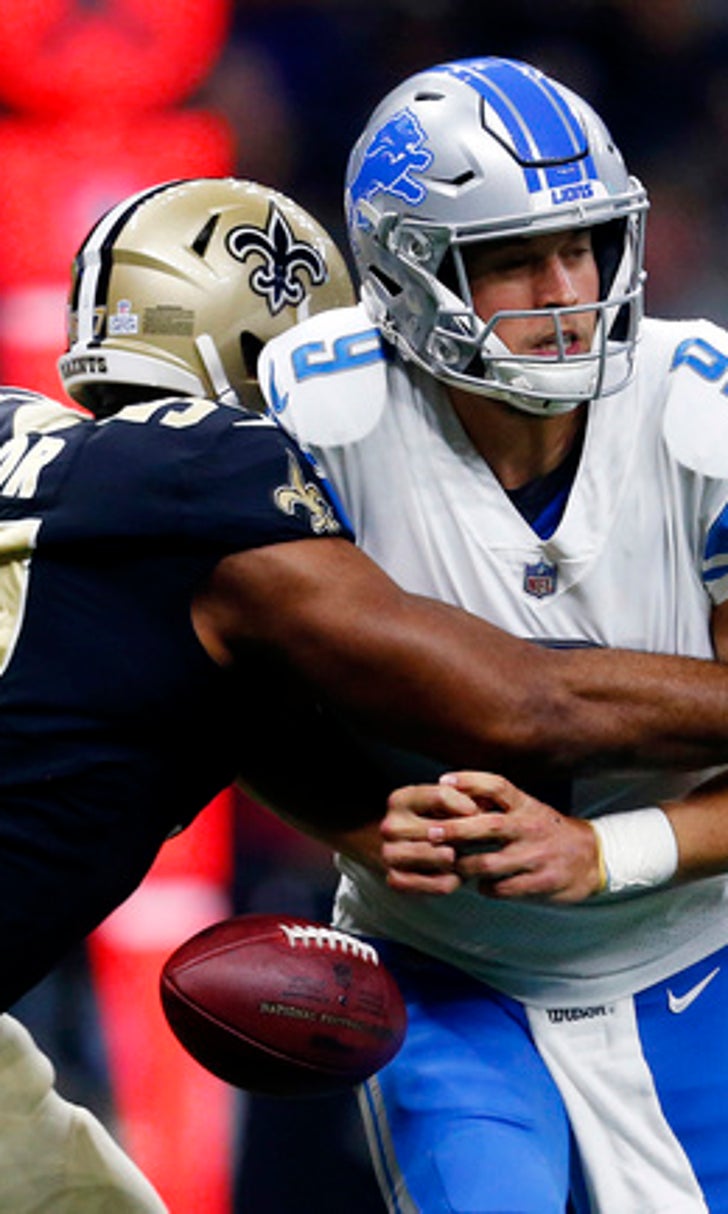 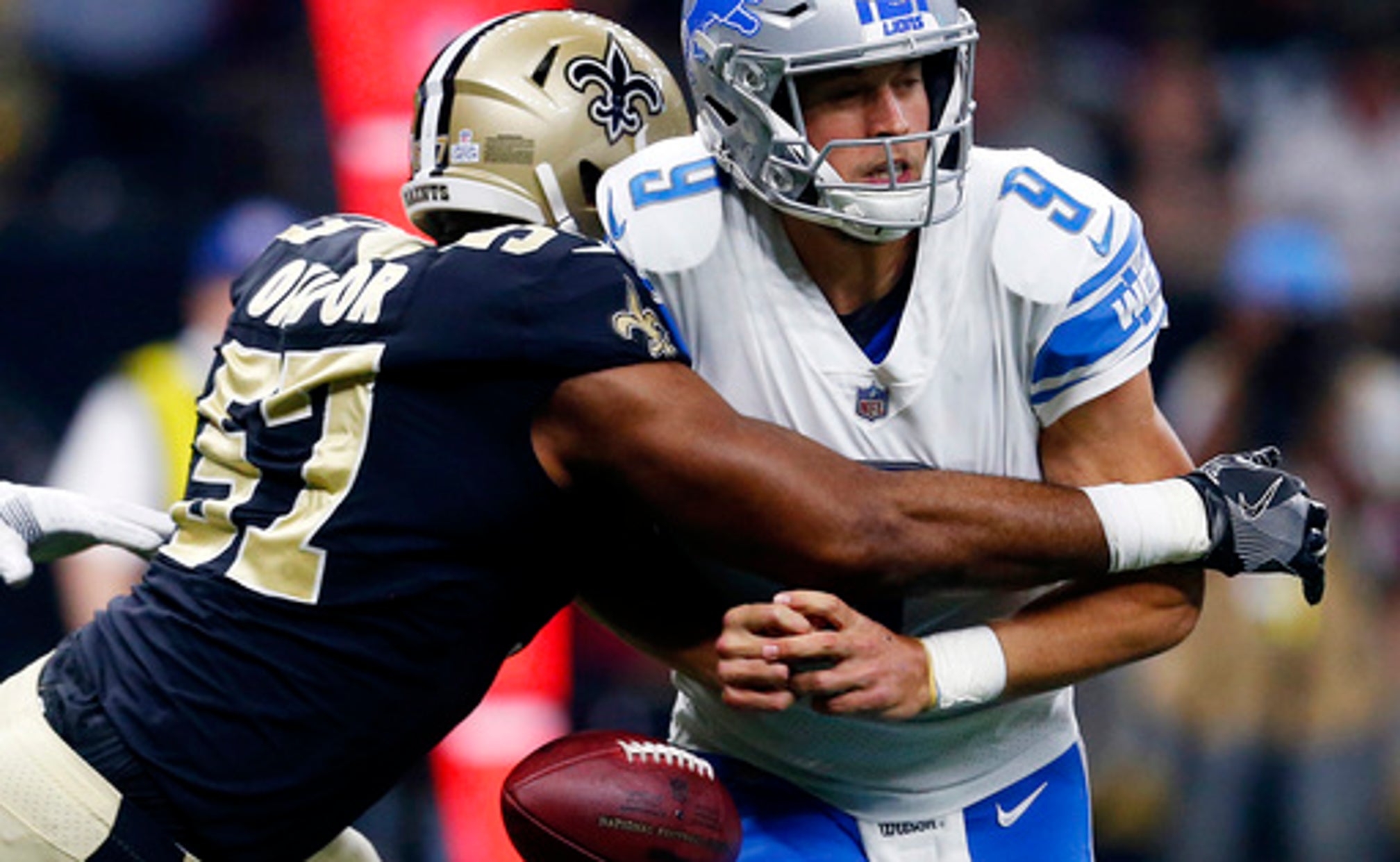 DETROIT (AP) A break in the schedule gave Detroit's beleaguered offensive line a chance to rest and recover.

Now comes one of the season's biggest challenges - a matchup with the sack-happy Pittsburgh Steelers.

''There's no one guy to really clue in on. They've got quite a few,'' quarterback Matthew Stafford said.

''Their guys off the edge do a great job. Their guys in the middle push the pocket well, and they're covering guys down in the back end. It goes hand in hand.''

The AFC North-leading Steelers are tied for second in the NFL with 24 sacks, so Sunday night's game will be quite a test for Stafford and the Lions. Detroit has allowed 17 sacks in its past three games, two of which were losses, and it remains to be seen how much last week's open date helped the Lions refresh.

Detroit added offensive linemen T.J. Lang and Rick Wagner in the offseason, but Lang missed the team's most recent game at New Orleans on Oct. 15 with a back injury. Tackle Taylor Decker hasn't played yet this season following shoulder surgery, and Greg Robinson - another new addition - has had his struggles.

Stafford has been knocked around of late, and now the Lions (3-3) have to face a Pittsburgh team that's allowing only 147 yards passing a game, the lowest mark in the NFL.

Perhaps the most impressive development in the Steelers' pass rush has been their ability to be effective without sending extra pressure. Pittsburgh's four fourth-quarter sacks against Cincinnati last week came when the Steelers just sent four men after Andy Dalton while dropping seven into coverage.

''When those guys (up front) are hot, it makes it that much easier to play linebacker and defensive back,'' Pittsburgh middle linebacker Ryan Shazier said.

The Steelers (5-2) have a comfortable two-game lead in their division, and their impressive defense is complemented by the usual offensive standouts. Le'Veon Bell is second in the league in rushing, and Antonio Brown is the NFL leader in yards receiving.

''He's quick as you could possibly think a receiver should be,'' Lions coach Jim Caldwell said. ''He can make you miss. He can run away from you. I mean, he can do it all. So, yeah he's going to challenge every single conceivable defensive technique that you can possibly place in front of him.''

Here are a few more things to watch when the Lions host the Steelers:

A CHANCE TO BE ELI-TE

After Martavis Bryant's social media outburst following Pittsburgh's victory over Cincinnati, the talented but enigmatic wide receiver indicated he'll be inactive this weekend. That should mean more opportunities for Eli Rogers and Justin Hunter. Rogers was benched earlier in the season after fumbling a punt against Chicago but returned to the lineup against the Bengals, catching his first pass since Week 2. Quarterback Ben Roethlisberger described Rogers' play of late as a ''resurgence.'' While Rogers works almost exclusively in the slot, the 6-foot-4 Hunter may have the best chance at taking over Bryant's role as a downfield threat.

Detroit already had a dependable kicker coming into the season in Matt Prater, and now the Lions have a legitimately dangerous returner in rookie Jamal Agnew, who has taken two punts back for touchdowns already this season.

Detroit got off to a 3-1 start in large part because of a plus-9 turnover differential. Since then, the Lions are minus-3 in that important statistic.

Detroit turned the ball over five times in a loss to the Saints , although the Lions did have three takeaways of their own in that game, and their defense still has Pittsburgh coach Mike Tomlin's attention.

''I've been really impressed that they're extremely opportunistic,'' Tomlin said. ''Passes get tipped in the NFL every weekend and oftentimes fall harmlessly to the ground, but boy, I think they've got nine interceptions. I think six of them are off of tipped passes, that's not by circumstance.''

THE OTHER KILLER B?

The Steelers' ''Killer Bs'' (Bell, Brown and Ben) better make way for another addition. Kicker Chris Boswell set a Heinz Field record by making five field goals against Cincinnati, and his reliability has helped Pittsburgh overcome some shaky performances inside the red zone.

The Steelers are 30th in red zone touchdown percentage, with only 42 percent of their trips inside the opponent's 20-yard line resulting in a TD.

Detroit DE Ziggy Ansah had three sacks in a win over the New York Giants in Week 2, but he has only one since.