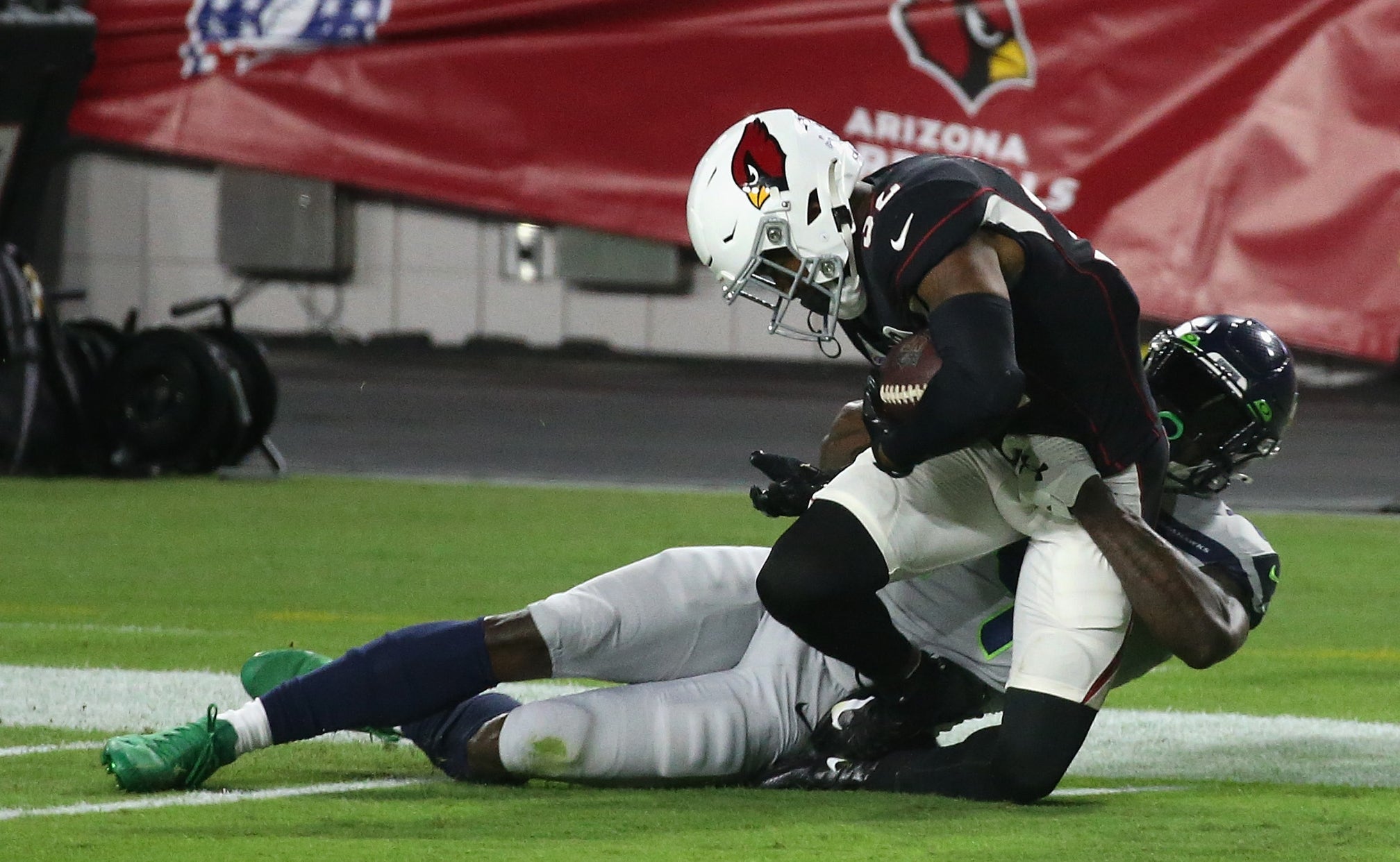 Less than four weeks ago, the Seattle Seahawks rode into the Arizona desert as one of the few remaining undefeated teams in the NFL and the clear favorites to win the NFC West.

On that Sunday night, however, Kyler Murray and the Cardinals signaled the race in the NFL’s best division had been joined as they rallied from 10 points down late in the fourth quarter to take a 37-34 victory in overtime.

On Thursday night, the division lead will be on the line in the Pacific Northwest when the two teams meet at CenturyLink Field for Thursday Night Football (8 p.m., FOX).

The Cards (6-3) and Seahawks (6-3) are in a three-way tie for the NFC West lead with the Los Angeles Rams (6-3). For Seattle, which has lost two straight games, including a 23-16 loss to the Rams on Sunday, the urgency is upped. A second loss to Arizona would result in a season sweep and the loss of a critical tiebreaker.

Seattle quarterback Russell Wilson, who started the season red-hot and emerged as the MVP favorite, is in one of the worst slumps of his career. He threw two interceptions and lost a fumble against the Rams, giving him 10 turnovers in the last four games (three of which Seattle has lost).

Wilson's slide started in the first matchup with the Cardinals. He entered that night with 19 TD passes and just three picks in the first five games, but he threw a season-high three interceptions in the defeat.

One of those interceptions produced one of the most memorable plays when Seattle receiver D.K. Metcalf ran nearly the entire length of the field to chase down Arizona safety Budda Baker and prevent a pick-six.

Wilson could get a boost in the running game this week as both Chris Carson and Carlos Hyde returned to practice Tuesday after missing the last three games.

Arizona comes to Seattle off a miraculous 32-30 victory over the Buffalo Bills that was highlighted by Murray’s 43-yard "Hail Mary" pass to DeAndre Hopkins with two seconds left.

The Cardinals have won four of their last five, topping 30 points in every game.

Being able to predict the big events of this game could help you win $25,000 in FOX’s Super 6 contest. Just download the free app, answer six questions correctly and you could win up to $25,000 while watching football. It’s that simple.

Here are the six questions for TNF and some advice on how to predict them:

What will the last scoring play of the first half be?

The choices are: Cardinals TD, Cardinals FG, Seahawks TD, Seahawks FG, any other score or no score.

Seattle has scored the last points of the first half in six of the nine games it has played. That includes last Sunday, when Jason Myers set a franchise record with a 61-yard field goal at LA.

Arizona has scored the last point of the first half in four of its nine games to this point, including the last two.

How will the first TD of the third quarter be scored?

Four times this season, Murray has scored the first touchdown of the second half with a rushing touchdown. (He also has thrown a TD pass in that situation.) That included his 5-yard scoring run in the last meeting between the two teams in Arizona.

Meanwhile, Wilson has thrown five TD passes to start the second half scoring this season.

This would appear on the surface to be an easy pick given that both players are in the MVP race. Remember that Wilson’s lowest passing yardage total this season is 217 yards. Murray’s lowest total was 133 against Carolina.

In the last meeting, however, Murray put up 360 yards against the porous Seahawks defense, while Wilson threw for 388. Go high on this one.

How different players will score a touchdown in the game?
The options are one or two, three, four, five, six+, or none.

This could be a tricky number because both quarterbacks are able to run the football in themselves. Also keep in mind the number of wide receiving options both teams have, with Metcalf, Tyler Lockett, Hopkins, Larry Fitzgerald and more.

Aim high on this one as well.

The overtime game between the two in late October ended up with 71 points scored. The last three Arizona games have ended with both teams in the 30s – a sign that defense is an optional exercise.

Seattle scored a season-low 16 last Sunday against the fierce Rams defense, but the Seahawks have also lived in the 30s – topping 30 in six of their nine games – because of their defensive woes.

Which team will win and by how many points?

It can’t be overstated: This is a must win-game for the Seahawks if they want to win the NFC West. A loss here would mean three divisional losses, two against Arizona (which would give the Cardinals effectively a two-game divisional lead over Seattle) and extend the belief that the Seahawks were really a one-man gang.

Yet, it is important to remember Seattle has won all four home games this season and should have a huge advantage on the short week.

The bet here is the Seahawks win, but it’s awfully close.

You can win $25,000 if you are able to win Thursday’s Super 6 jackpot. And don’t forget that $1 million of Terry Bradshaw's money is also line in the NFL Super 6 challenge on the FOX Super 6 app.