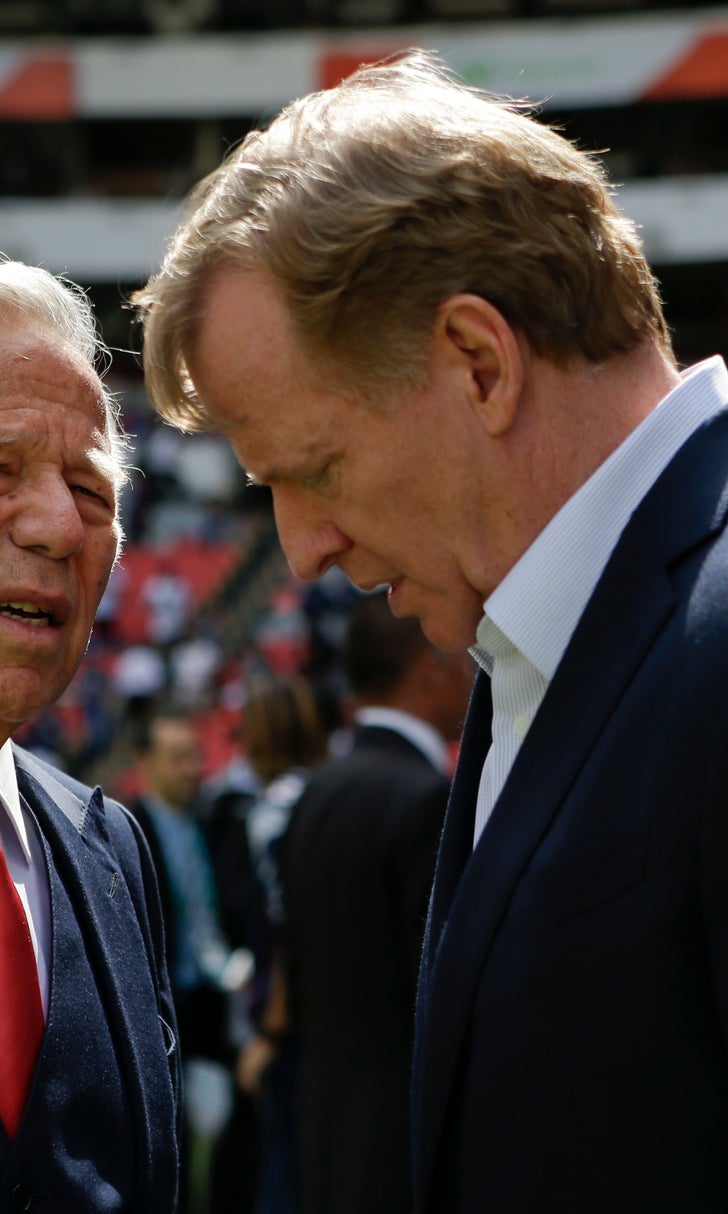 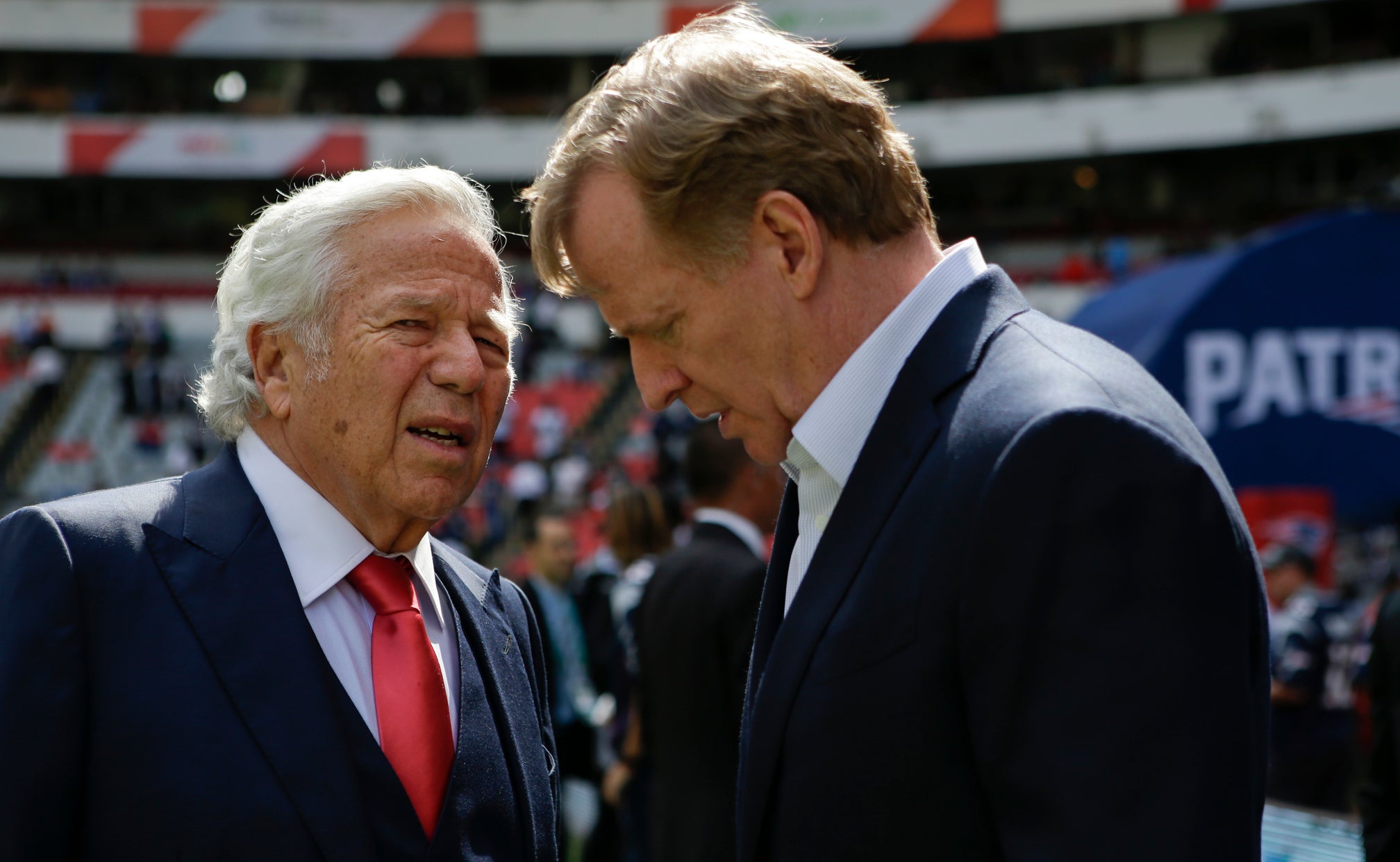 NFL aims to handle Kraft case like any other conduct matter

Kraft is one of hundreds of men charged in recent days as part of a crackdown on prostitution allegedly occurring in massage parlors between Palm Beach and Orlando. Ten spas have been closed and several people, most of them women originally from China, have been charged with running the operation.

The 77-year-old Kraft was chauffeured to the Orchids of Asia Day Spa in a 2014 white Bentley on the evening of Jan. 19, where police say they videotaped him engaging in a sex act and then handing over an undetermined amount of cash, Jupiter, Florida, police said in charging documents released by the Palm Beach State Attorney's Office.

Investigators said Kraft returned 17 hours later, arriving at the upper-middle class shopping center where the spa was located in a chauffeured 2015 blue Bentley, the documents said. Kraft, who is worth $6 billion, was videotaped engaging in sex acts before paying with a $100 bill and another bill, police said. He then flew to Kansas City to watch his Patriots defeat the Chiefs in overtime hours later.

Kraft, whose team won the Super Bowl earlier this month in Atlanta, denied wrongdoing Friday, shortly after Jupiter police announced he was being charged. The NFL said Monday in a statement that its personal conduct policy "applies equally to everyone in the NFL" and it will handle "this allegation in the same way we would handle any issue under the policy." Kraft's wife, Myra Hiatt Kraft, died in 2011. He has been dating 39-year-old actress Ricki Noel Lander since 2012.

Another high-profile businessman, former Citigroup President John Havens, 62, is also charged with paying for sex at the Orchids of Asia spa. He too has denied wrongdoing. He was Citigroup president in 2011 and 2012. He now runs a hedge fund that was spun off from Citigroup. Twenty-three other men are also charged in Palm Beach County, with others charged in a string of counties spanning more than 150 miles (240 kilometers).

Palm Beach State Attorney Dave Aronberg said Kraft will be issued a summons that is similar to a traffic ticket and assigned a day to appear in court. Most people charged for the first time with soliciting are eligible for a diversion program where they pay a fine, perform 100 hours of community service and attend a class where they learn about the dangers of prostitution and how it is often tied to human trafficking. Fines can be up to $5,000.

Authorities investigated the parlors for months, gathering evidence through observation, interviews with men stopped leaving the spas, trash bin searches and surveillance of their owners. Judges then issued warrants allowing them to secretly install cameras inside the spas to record what transpired.

Aronberg steered a Monday news conference away from Kraft's case to the larger issue of human trafficking. No human trafficking charges have been filed against Kraft, Haven or any of the other alleged customers, but at least one alleged operator is charged in Indian River County with trafficking.

At least some alleged operators and workers were born in China and Chinese translators are being used to interview women connected with the businesses, according to court documents. The documents said many of the workers were forced to live at the spas and were not allowed to leave without an escort.

"The larger picture, which we must all confront, is the cold reality that many prostitutes in cases like this are themselves victims, often lured to this country with promises of a better life, only to be forced to live and work in a sweat shop or a brothel performing sex acts for strangers," Aronberg said.

He called such prostitution "modern-day slavery" fueled by customers "who aren't aware or don't want to be aware of those being exploited."

Kathy Chen, a researcher with the anti-human trafficking group Praesidium Partners, has helped Asian women rescued from sex rings. She said it's often difficult to persuade them to testify against their captors, fearing for themselves and for their families back home.

Chen said Chinese sex rings often prey on young women from lower economic classes. One told its workers that "in six months we guarantee you enough to buy a car and after three years you can buy this store and in five years you can buy a home ... and you can bring your family over and you will have everything."

Aronberg pointed out that Florida has severe punishments for human trafficking and allows the workers to be treated as victims if they cooperate. He also said the federal government offers visas to victims who are foreign nationals if they cooperate, allowing them to remain in the country indefinitely. Authorities have not said how many women worked at the parlors or where they are being housed since the spas' closures.

Aronberg said he was not shocked that Kraft and other wealthy men would be charged with soliciting sex in a massage parlor.

"Defendants in these matters come from every socio-economic group. It is just the reality of the times we live in," he said.