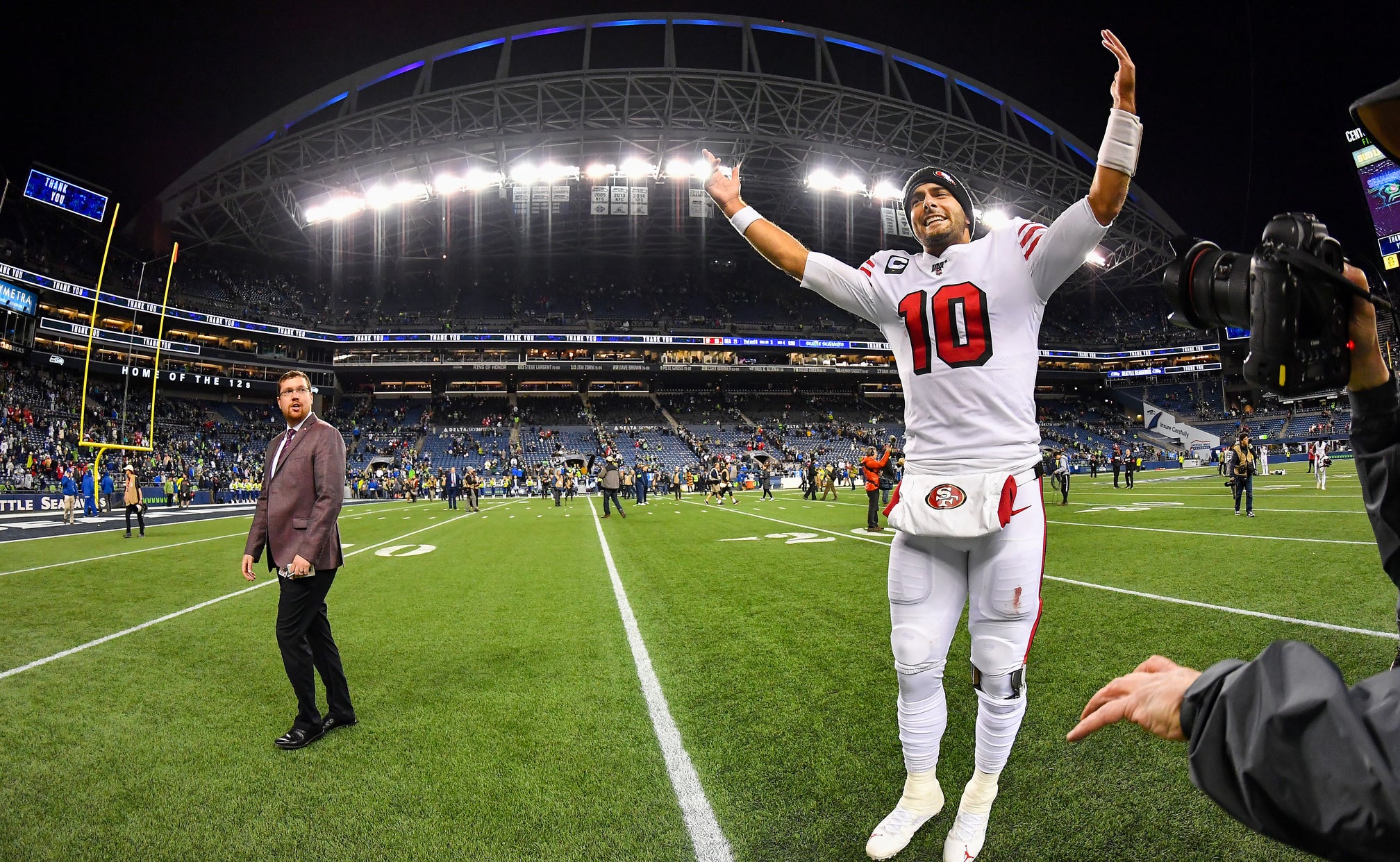 Welcome to Week 8 as we approach the halfway mark of the NFL season. This week doesn’t give us the best lines, but I’ve found some wagers I can back, including a rare teaser.

Here are my picks:

This line has moved down from six after Seattle lost in overtime at Arizona. With the number now at a field goal, however, it’s still worth the bet on the Niners.

After five weeks, the Niners were 2-3 with only wins over the lowly Giants and Jets. Entering San Francisco's Week 6 game against the Rams, I had lost faith in the team. The 49ers were dealing with a rash of injuries, and their offense had faltered badly. Then they whooped the Rams and went back east to dominate the Patriots, who might be awful on offense but have an above-average defense.

The Niners were 22nd in offensive EPA through five weeks as they struggled with injuries and poor offensive line play, but they have turned it around the last two weeks against good competition. Their offense ranked seventh in EPA against two stout defenses in the Rams and Patriots. They are getting healthy and their line has played better, which has increased their offensive production. Kyle Shanahan feels like he’s in the zone right now with his play calling, showing off a creative run game, screens and schemed-up explosive plays in the passing game. He even found a way to protect his line against Aaron Donald.

Now, the Niners get the awful Seahawks defense, which has allowed more yards than anyone. Seattle is 25th in third-down stops, get no pressure (the addition of Carlos Dunlap, who won't play this week, likely won’t help that much) and sit 30th in passing defense DVOA. I can’t trust this unit to get a stop with the game on the line.

Letting "Russ cook" has given the Seahawks their best offensive team in the Pete Carroll area. Russell Wilson has been outstanding this season while guiding the second-ranked DVOA offense. And I expect the offense to play well against Sunday, but just not to the point where they can carry the entire team to covering this game. The Niners defense, even with their banged up defensive line, has been steady all season, coming into this game at eighth in DVOA. That’s enough to get a few stops Sunday against the Seahawks, which will be all they will need because their offense will score at will.

I don’t do trends often, but it’s worth pointing out some here. There’s no home field in the NFL anymore, especially with no fans in the stands this season. Seattle is 5-9 against the spread in its last 14 home games. The Niners are 10-2 ATS on the road, and they’ve covered eight straight regular-season game as a dog.

Enter the NFL Challenge contest on the FOX Super 6 app for free and you can take a shot at this week's $1,000,000 jackpot. Download now at FOXSuper6.com.

The Raiders beat the Chiefs in Week 5, and many thought they had arrived. Las Vegas fell back to earth against the Bucs on Sunday, and I think this is another good spot to bet against the Silver and Black, especially with the public all over them.

I’m a former offensive lineman. So, when I look at a matchup, I tend to focus on the trenches, and I think the Browns have a major advantage in this game. Cleveland's offensive line is elite, even without center JC Tretter, who’s unlikely to play this weekend. Pro Football Focus has the Browns ranked first in pass protection and in run blocking.

The Raiders defense is poor against the run, coming into the game ranked 29th in rushing defense DVOA. It’s ideal the Browns can run the ball, because Baker Mayfield isn’t that efficient at times. However, he has had his best games this season against teams with poor pass defenses. He was bad against the Ravens and Steelers, especially when the Browns feel behind early. He was better against good pass defenses in the Colts and Washington Football Team, but he got to play from ahead as they ran the ball well. And then his two games against the Bengals were outstanding. The Raiders pass defense is 29th. They rank 26th on third down and 30th in yards per play. The Browns and Mayfield should play well enough against the Las Vegas defense.

The Raiders offense is playing well under Derek Carr, ninth in yards per play and sixth in passing offense DVOA. But they can’t run the ball like they did last season, and without right tackle Trent Brown, they don’t play as well up front. It’s worth noting, since the first two weeks of the season, the Raiders offense has scored 23 or less three times, with the Chiefs game being the only outlier. And as mentioned last weekend, that felt more like a Chiefs mistake than a Raiders success. The Browns defense isn’t spectacular, as it’s middle of the road in most everything, but it’s good enough to stop the Raiders from scoring 30 points.

Lastly, kickoff temperature in Cleveland is forecast to be 51 degrees and raining. Derek Carr has lost 10 straight games where the temp is under 50 degrees at kickoff. I know I’m stretching it, but I get a “cold” weather game, in the rain, with the Raiders as the public team. I’ll take the Browns.

This one seems rather simple to me. I get a Rams team that’s seventh in DVOA going against a rookie quarterback in his first start. A Rams defense that pressures the quarterback against a Dolphins offensive line that’s below average in pass protection and has benefited from Ryan Fitzpatrick throwing the ball quickly. We’ve never seen if Tua Tagovailoa can do that at the NFL level. '

Looking back at his numbers at Alabama, Tagovailoa played far worse under pressure. He dropped from a 74.8 completion percentage to 45.9, and his yards per attempt dropped by three yards. And because Joe Burrow and Justin Herbert have played well, it’s just expected Tua does? Feels like this will be a tough spot for him.

The Rams offense, while struggling at times against the Bears, did enough to score 24 points against a defense that’s nowhere near what the Dolphins are. The Dolphins are dead-last in the NFL at stopping the run, while the Rams are the best rushing team in the league. When the Rams can run the football, their offense is nearly unstoppable because it allows Jared Goff to strike with play action and move the pocket.

A common teaser is when you move a line six points in any direction. It’s important to move the teaser through important numbers, like three or seven. In this case, I moved all three teams through those numbers. When you stack teams together in a teaser, the payout increases. On a weekend when you like teams but aren’t quite sure about the lines, this allows you a chance to make the wager with a more comfortable line or side.

I’ve tried all week to get an angle I liked for the Steelers-Ravens game, and it has been tough. I’ve been on the Steelers bandwagon for the entire season, and they’ve made me money. But this line just scares me. It opened with the Ravens giving five, which appears ludacris in my opinion. However, it is also eye-opening that Vegas believes, on a neutral field, the Ravens are close to a field goal better than the Steelers.

Both teams have offenses and defenses that are about equal in DVOA. While the Ravens offense has underperformed from last season, the Steelers have appeared to improve each week. After Pittsburgh's big win against the Titans, I thought the line would be under 3, with the Steelers playing better than the Ravens now. Vegas clearly disagrees. So instead of taking a side here, as I don’t feel great taking the Ravens, I’ll add the Steelers into a teaser. They should cover nine points in Baltimore.

The Eagles play the Cowboys on Sunday night, and they will beat them. As I discussed Monday, the Cowboys are a complete disaster. They are bickering in the media about the coaching, and the coaches are answering with passive-aggressive comments. Dallas is down to its third-string quarterback, and all of its starting offensive line is out. And the defense, which is historically bad, just cut a bunch of players this week. That will surely help.

Now, look, the Eagles aren’t in a much better place with injuries, but they have Carson Wentz and a good enough defense. Plus, the Eagles are off a mini-bye and have time to prepare for this depleted Cowboys team.

The last two seasons the Packers have crushed poor teams ... and guess what folks, the Vikings are a poor team. Minnesota is off a bye, but they’ve lost five of their last six off a bye. Aaron Rodgers threw for 364 yards in their first meeting, and the Vikings have not gotten any better since Week 1. So, now I just need the Packers to win this game to cover the teaser? Yes, please.

Enter the NFL Challenge contest on the FOX Super 6 app for free and you can take a shot at this week's $1,000,000 jackpot. Download now at FOXSuper6.com.