Leslie Frazier steps in to take over Vikings

During perhaps the most tumultuous season in franchise history, the Minnesota Vikings were looking for a steady hand and a calming voice to guide them through the rest of this rocky year.

Vikings owner Zygi Wilf turned to Frazier, the team's defensive coordinator, to take over for the fired Brad Childress on Monday, completely unsatisfied after a talent-laden roster was blown out at home by division rival Green Bay to fall to 3-7 in a season that began with Super Bowl expectations.

''Leslie is a tremendous individual who has a wealth of experience and knowledge, and we believe is highly respected by our players (and) certainly within our organization,'' Wilf said.

Frazier will serve as the interim coach for the remainder of the season and Wilf would not discuss his plans for hiring a permanent replacement.

Frazier is from the Tony Dungy model of coaches, a quiet leader with an open-door policy that players appreciate. After several Vikings clashed with Childress over the last four years, the change to a players' coach could help settle a volatile locker room.

''He's a very businesslike guy who is encouraging, upbeat and energetic,'' said Dungy, who was head coach in Indianapolis when Frazier served as his top assistant on a Super Bowl-winning staff. ''He's got a lot of experience, but the biggest thing is he'll have the players' confidence that he believes in them and they'll have the confidence to believe in him.''

The 51-year-old Missouri native has interviewed for seven NFL head coaching jobs over the last few seasons, occasionally wondering if he was brought in simply to satisfy the Rooney Rule that requires NFL teams to interview at least one minority candidate during their search.

Now he is finally getting his first crack at a job he has long coveted, but it certainly doesn't come under ideal circumstances.

''It's not the way I expected it to (happen),'' Frazier said. ''I didn't expect to be at a press conference here in Minnesota under these circumstances. But at the same time, it's a great opportunity for myself and our team to take advantage of it and to do what we've been called to do, what we've been asked to do. As in my case, the head coach, and also with our players to go out and perform at the level we know we can perform at.''

The Vikings are a mess. Despite a roster that sent 10 players to the Pro Bowl a year ago, the team is languishing during a chaotic season filled with off-the-field scandals and on-the-field failures.

Brett Favre is the subject of an NFL investigation and has turned the ball over 22 times. Sidney Rice returned from a season-long hip injury on Sunday, just in time for starting right guard Anthony Herrera to be lost for the year with a torn ACL in his left knee.

And the defense is aging and leaking, and was embarrassed by the Packers time and again on Sunday.

All of it has snowballed the last two weeks - with the Vikings getting outscored 58-16 in losses to the Packers and Bears - to compel Wilf to fire a coach he signed to a four-year extension just last season.

Now, after getting passed over so many times, Frazier finally gets a chance to show what he can do.

''My personality is what it is,'' he said. ''I hope that I don't become one of those guys that sometimes gets a little bit out of body because they get a title. I hope that I remain who I am and still get the most out of our players every single practice, every single meeting, every single game.''

Players were unavailable Monday to discuss the move in detail, but the team provided statements from several veterans expressing support for their new leader.

''He's got great football smarts and players can relate to him and vice versa,'' running back Adrian Peterson said. ''He has a certain vibe and energy that everyone can feel when they're around him. When he speaks, guys perk up and tune in.''

Over the last two years, Frazier has formed a trust with Favre, who often butted heads with Childress over the offensive philosophy and play-calling. Frazier quickly threw his support behind Favre at his news conference on Monday, saying the 41-year-old was the man to lead them out of the abyss.

''What you see is what you get with Leslie,'' Favre said in his statement. ''He has a background of winning Super Bowls as a player and coach and he knows what it takes to win in the NFL. He can relate to players having been in their shoes himself and will prepare the team well.''

But like Childress, Frazier has never been a head coach at a major college program or in the pros.

He played defensive back on the 1985 Chicago Bears team that won the Super Bowl and is considered one of the greatest defenses in league history. His coaching career started at Trinity International University in 1988 and he has also been an assistant at the University of Illinois and in the pros with the Eagles, Bengals and Colts.

''He's very smart. The players loved him. He's an ex-player so he understands what your body is going through and he was in the Bears Super Bowl video, so you always have to tease him about that,'' Colts linebacker Gary Brackett said. ''But he's a great coach, very fundamental, so I'm excited for him.''

Dungy was delighted to see his close friend and protege finally get a chance at the job he's been touting Frazier for for several years, but was also apprehensive about the situation that surrounds him.

''Very, very rarely do (interim jobs) work out,'' Dungy said. ''But I'm hoping this one does, absolutely.''

Speaking with more authority and bravado than ever, Frazier is not shying away from what he knows will be a daunting task.

How To Bet The AFC West
Win totals. Playoff odds. Trends to know. Jason McIntyre is breaking down all 32 teams, one division at a time.
52 mins ago 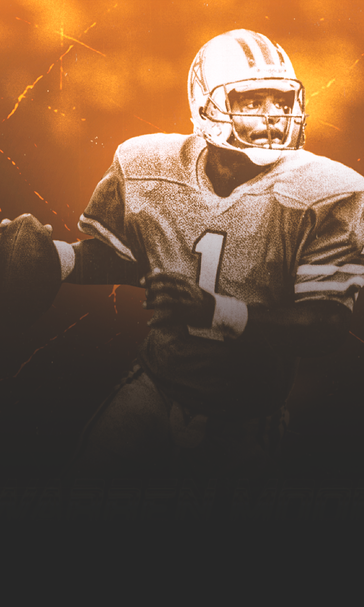 On This Day: Moon Makes HOF History
On this day in 2006, Warren Moon broke the quarterback color barrier in the Football Hall of Fame.
2 hours ago

Top 5 'Tampa Tom' Moments
Tom Brady turned 43 on Monday, so we're celebrating with his Top 5 social media moments since arriving in Tampa Bay.
1 day ago
those were the latest stories
Want to see more?
View All Stories
Fox Sports™ and © 2020 Fox Media LLC and Fox Sports Interactive Media, LLC. All rights reserved. Use of this website (including any and all parts and components) constitutes your acceptance of these Terms of Use and Updated Privacy Policy . Advertising Choices . Do Not Sell my Personal Info