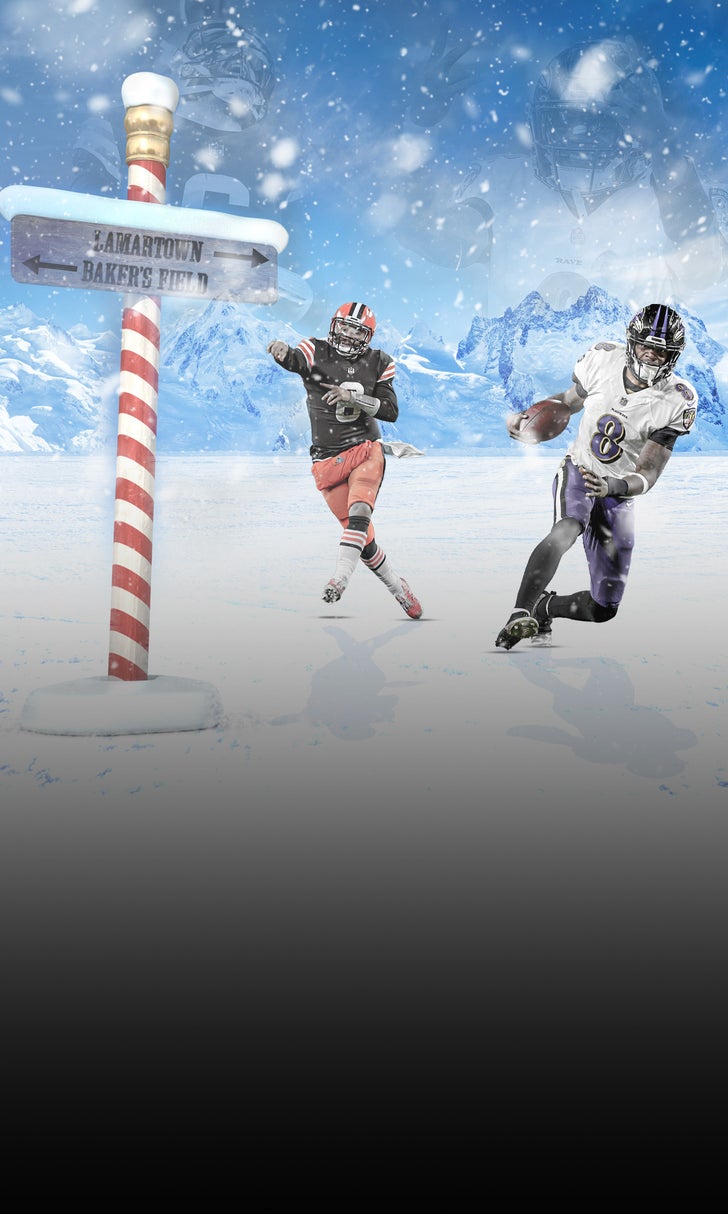 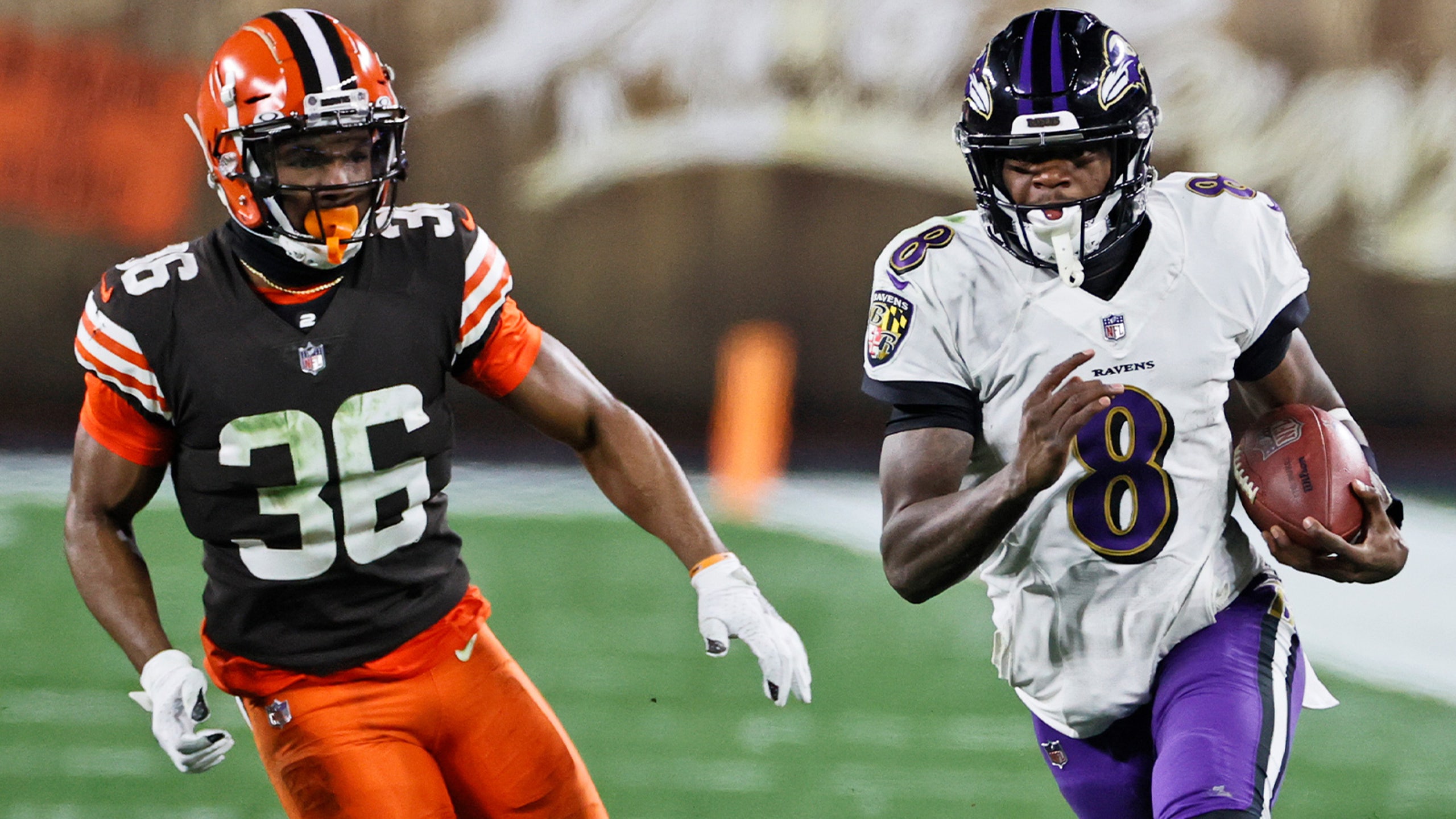 As far as quarterback showcases go, Monday night's clash between the Baltimore Ravens and Cleveland Browns will be tough to top.

Lamar Jackson and Baker Mayfield went toe to toe in an epic primetime matchup that many have dubbed the best game of the year, with the Ravens scraping by the Browns, 47-42.

The run game for both teams got the job done early, with the first eight touchdowns of the game coming on the ground.

But with Baltimore sporting a 34-20 lead heading into the game's final quarter, that's when the fireworks really started. The Browns and Ravens combined to score four more touchdowns in the fourth, bringing the game's total to an even dozen.

Mayfield dazzled with nine completions on 12 attempts for 128 yards and two passing touchdowns in the final frame, putting up a passer rating of 148.6.

Cleveland's QB even scampered in for a score to give the Browns their first lead since game's opening possession.

Jackson missed Baltimore's entire first series, and most of their second series, of the fourth quarter with cramps ⁠— yes, that's the official stance, not an unexpected nature-calling ⁠— before running up an impressive fourth-quarter stat line of his own.

Following his return to play on fourth-and-5, Jackson went 5-of-6 for 82 yards and a touchdown, putting up a perfect passer rating of 158.3 and guiding the Ravens into position to allow Justin Tucker to boot the game-winning field goal.

The duel between Jackson and Mayfield had analysts buzzing, and begged the question: Which AFC North quarterback had a more impressive performance? 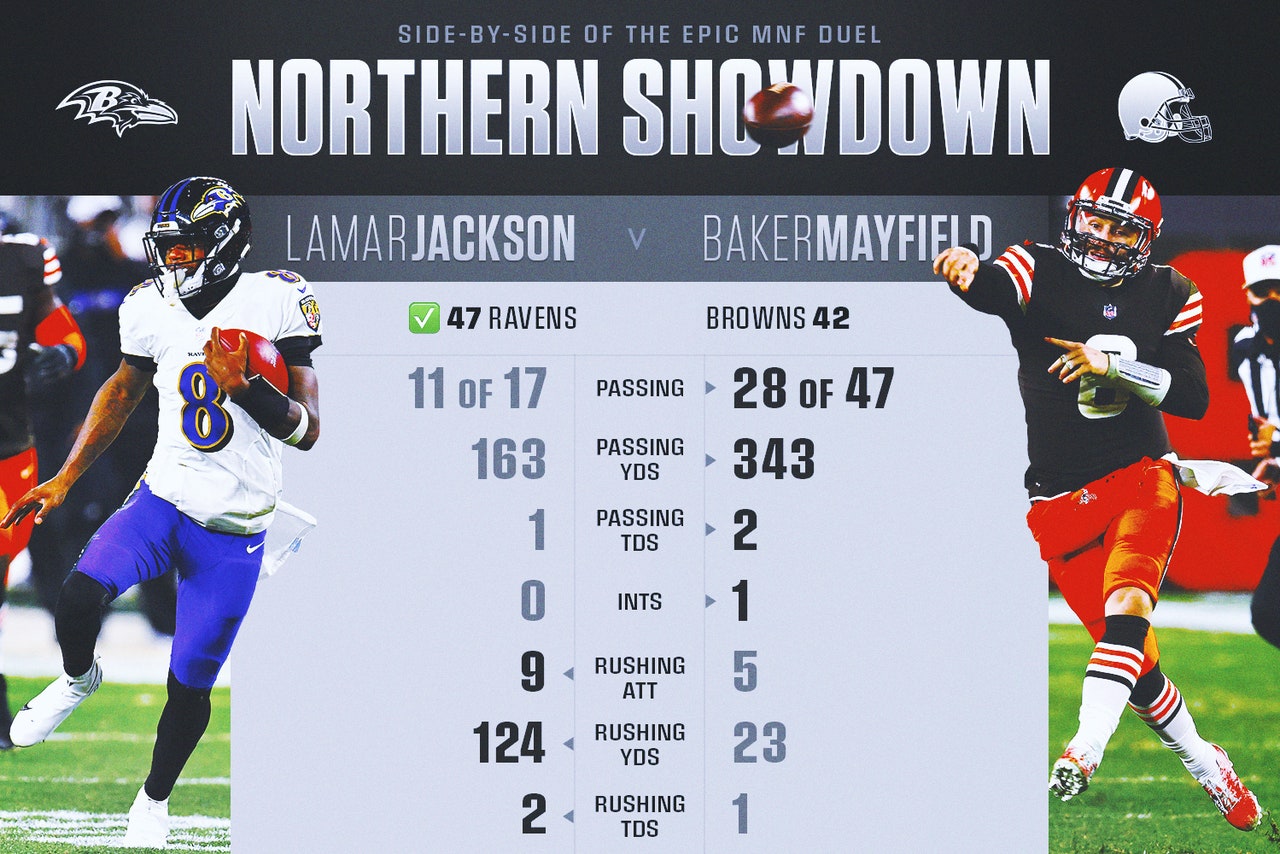 On Undisputed, Shannon Sharpe said what Jackson had to do – coming in cold after his retreat to the locker room – was mindboggling.

"Given what he had to do in that moment, it was unbelievable ... Last night, Lamar Jackson showed you something."

What most impressed NFL Network's Peter Schrager is that Jackson, one of the league's most dangerous rushing threats, did his damage in the fourth quarter solely through the air.

As mentioned, Jackson had a perfect passer rating in the fourth, and outside of maneuvering around and outside of the pocket, didn't rely on his legs to lead the Ravens to victory.

Despite Jackson's heroics, Nick Wright told the First Things First crew that Mayfield had the better night, in his opinion.

"The better quarterback on the field, without a shadow of a doubt, was Baker Mayfield ... He was outstanding last night against a team that annihilated [the Browns] in Week 1, and it shows massive growth for him and for the team."

ESPN's Marcus Spears also took positives away from the performance by Mayfield and the Browns, despite the outcome.

"He answered questions for me last night ... It's a culmination of a lot of things that Baker Mayfield was able to do last night, that for the first time since I've been watching him, in big moments, he looked poised and he looked as good as any quarterback in the league."

When forced to decide between Jackson or Mayfield, it doesn't seem like there's a bad choice.

And for two quarterbacks that were catching a bit of flak for their performances through various parts of this season, Monday night put a lot of critics in their place ⁠— at least for a week.

Will The Mahomes News Move Lines?
Patrick Mahomes is set to play Sunday. Will the odds change? And how much are elite QBs worth to the spread? Sammy P explains.
36 mins ago

Confidence Picks For Championship Weekend
Both the AFC and NFC title games are rematches, so Geoff Schwartz examines what we can learn from those first meetings.
43 mins ago

An Inside Look at Patrick Mahomes' Playlist
What tracks does Kansas City's Patrick Mahomes listen to before taking the field? Martin Rogers has the answers.
45 mins ago

The 7 Key Championship Game Matchups
The AFC and NFC titles are up for grabs on Sunday. Michael Vick breaks down the key matchups to keep a close eye on.
3 hours ago
those were the latest stories
Want to see more?
View All Stories
Fox Sports™ and © 2021 Fox Media LLC and Fox Sports Interactive Media, LLC. All rights reserved. Use of this website (including any and all parts and components) constitutes your acceptance of these Terms of Use and Updated Privacy Policy. Advertising Choices. Do Not Sell my Personal Info